Combining several classic MCU tropes with a great twist on traditional martial arts wirework, and introducing our first new hero and team to the MCU for a while, Shang-Chi is fresh, fun and unique, and exactly what the MCU needed.

Shang-Chi is the first MCU movie centred around a brand new character since 2019’s Captain Marvel, and really that movie had the very familiar Nick Fury as a central character and once again took place (mostly) in various parts of the US, so really this is more like Black Panther, but even with that, we’d met T’Challa and some Wakandan’s and even glimpsed Wakanda in Civil War.

So arguably this is the first movie with a (mostly) all-new cast of characters, Avengers level hero, all-new villains and world-ending threats, stakes and everything else an MCU movie could need – since 2016’s Doctor Strange and just like Black Panther and Doctor Strange Shang-Chi makes all of those things look easy, with a unique style, and fresh approach to a superhero origin story.

Without diving into too many spoilers, Shang-Chi’s story ultimately comes down to family. Like much of the MCU, and yet there’s something extremely unique about all of it. 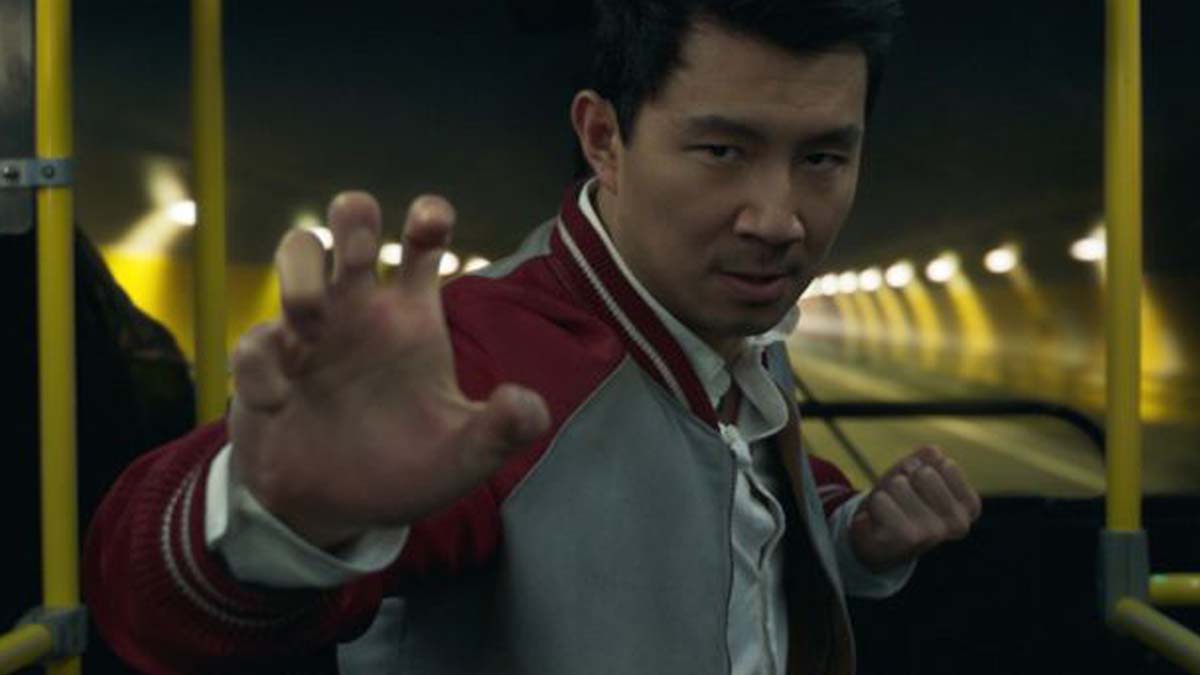 Although in many ways Shang-Chi is an origin story, and it does have a bunch of “here’s the hero finding a special new power” sort of thing. One of the cooler things is that Shang is already a huge badass, with a fully fleshed out and very cool backstory that is revealed via flashbacks throughout the movie.

The film combines several MCU tropes with something very different. The action, despite having the expected incredible CGI has a basis in more traditional martial arts movies with somewhat obvious (and intentional) wirework throughout – and it looks awesome.

Similarly a lack of focus on a romantic plot, an already established story that we kind of jump into halfway (or if you like hundreds of years into), and a great brand new cast that has just enough nods and cameos from the wider MCU to make it feel solidly a part of the universe and yet the first fully out there and brand new part of it that we’ve had in a while. 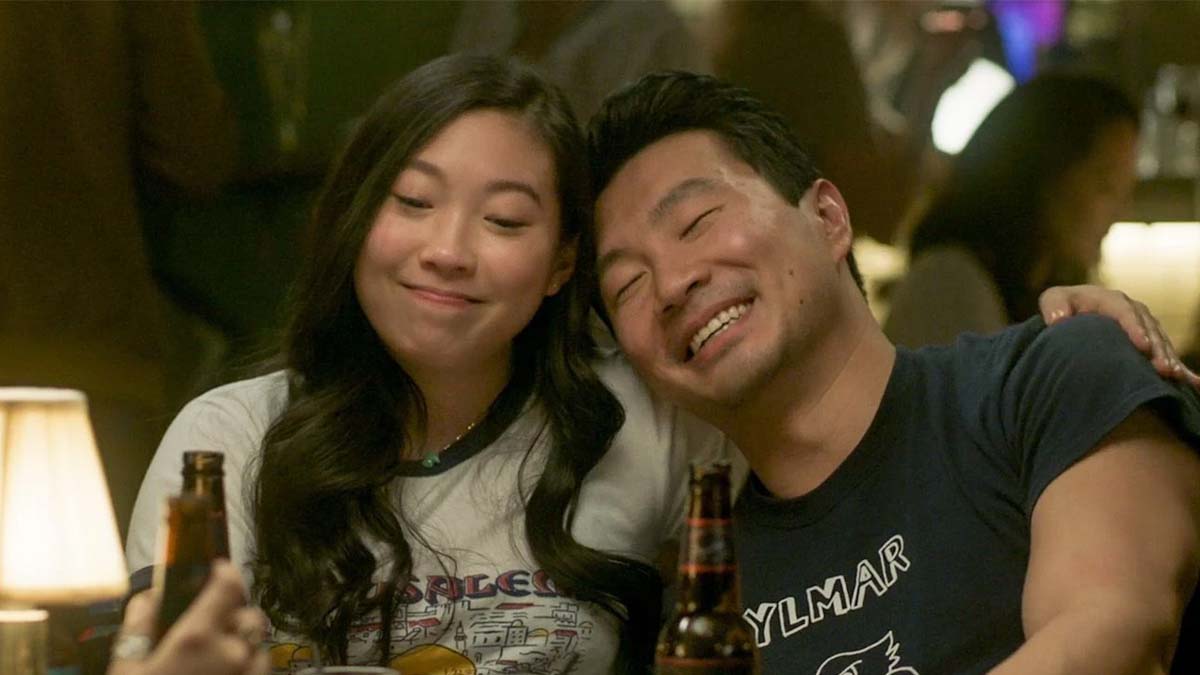 Xu Shang-Chi/Shaun played by Simu Liu starts out as a seemingly ordinary guy who turns out to be a very extraordinary guy. Taking a turn from usual MCU movies, Shang seems like a regular guy who is about to discover a greater destiny, only for the movie to reveal that he is already well aware of almost everything, and is already a total badass.

I’d argue that at times Shang doesn’t feel like the main character of the movie. But in the final act Shang rises to the top to get his turn at some huge personal development and really becomes the hero of the movie (or the main one, of many…). I think this is due to the kind of slow-burn reveal of the flashbacks – it leaves Shang as more of a mystery until near the end).

Awkwafina (Aqua – Fina) plays Katy, Shang’s longtime best friend and possibly/probably more by the end of the movie, but the film does make an effort to avoid any obvious romantic tropes – making this even more of a unique MCU movie. 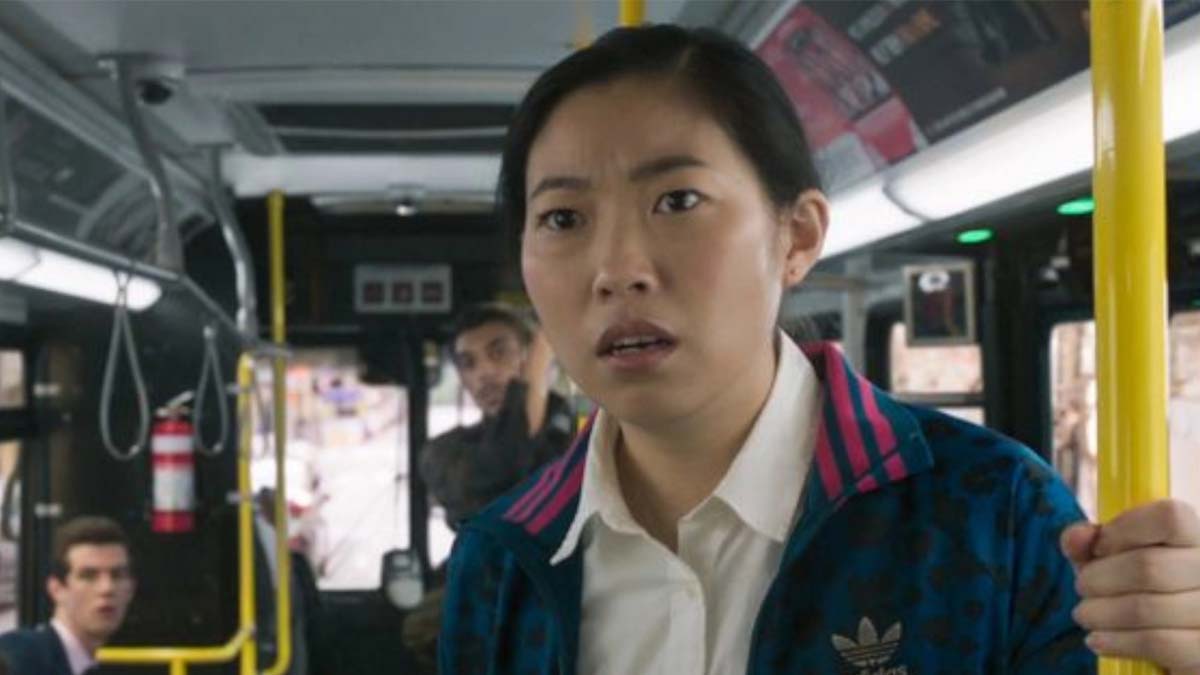 Katy is in many ways the audience conduit for Shang-Chi, it’s through her we find out that Shaun is actually Shang and that his life is much more complicated than it may appear on the surface.

Her arc through the movie is (like most characters here) really good, and in many ways, she is the heart of the story. It shows her growing from someone who doesn’t know what they want to do in life, going up against parental pressure and disappointment, to basically saving the universe.

Meng’er Zhang is Xu Xialing, Shang’s sister – who again without getting too far into it, he abandoned. She is just as much of not more of a badass than he is, and has her own plans for taking on their father, and what should happen with the ten rings. 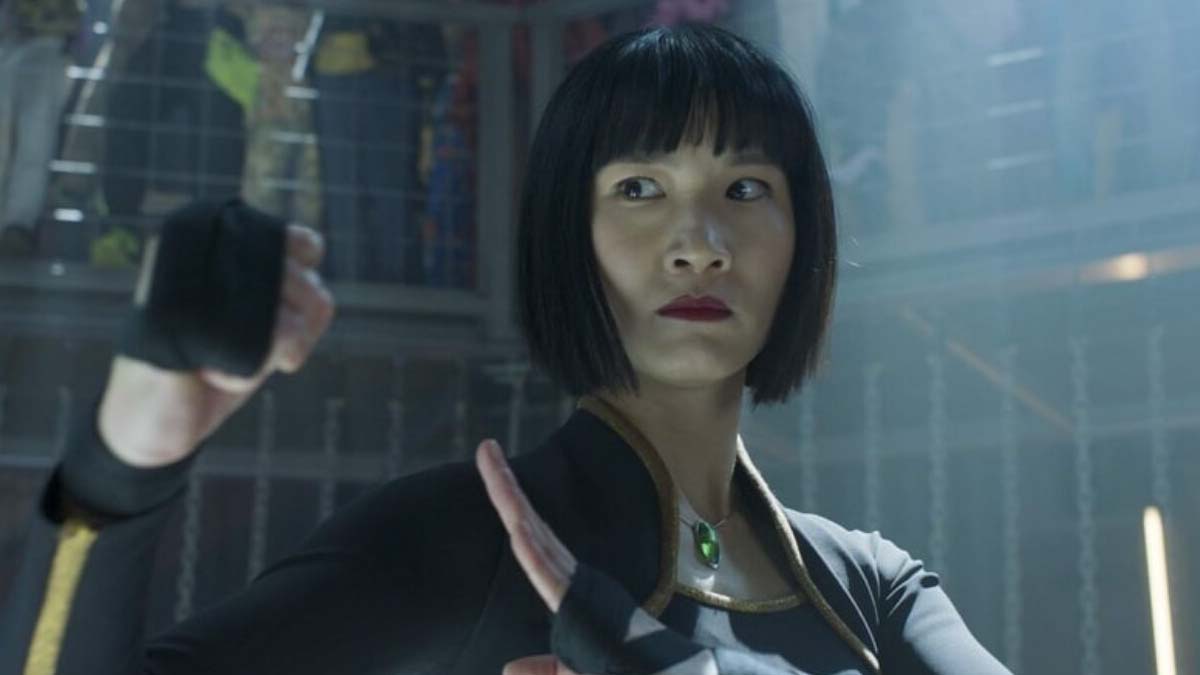 My only problem with any of the characterisation in the whole movie is Tony Leung’s Leader of the Ten Rings, well not him, in fact not him at all he’s great – more how everyone acts like he’s the ultimate evil.

Shang literally says he’s going to kill his Dad because that’s what he trained him to do, even though he’s just found out that his Dad is being tricked and manipulated by some mystical ancient creature.

I feel like both kids hate their Dad for neglecting them after the death of their mother (which is of course, fair enough), but that’s the only real justification for him being the villain – and ultimately although what he’s done and is intending to do is wrong, it is because the one person he’s loved in hundreds of years was murdered AND he is being controlled/tricked by this evil being – so it feels a bit of a leap to be like – yeah we’re just gonna kill this guy. 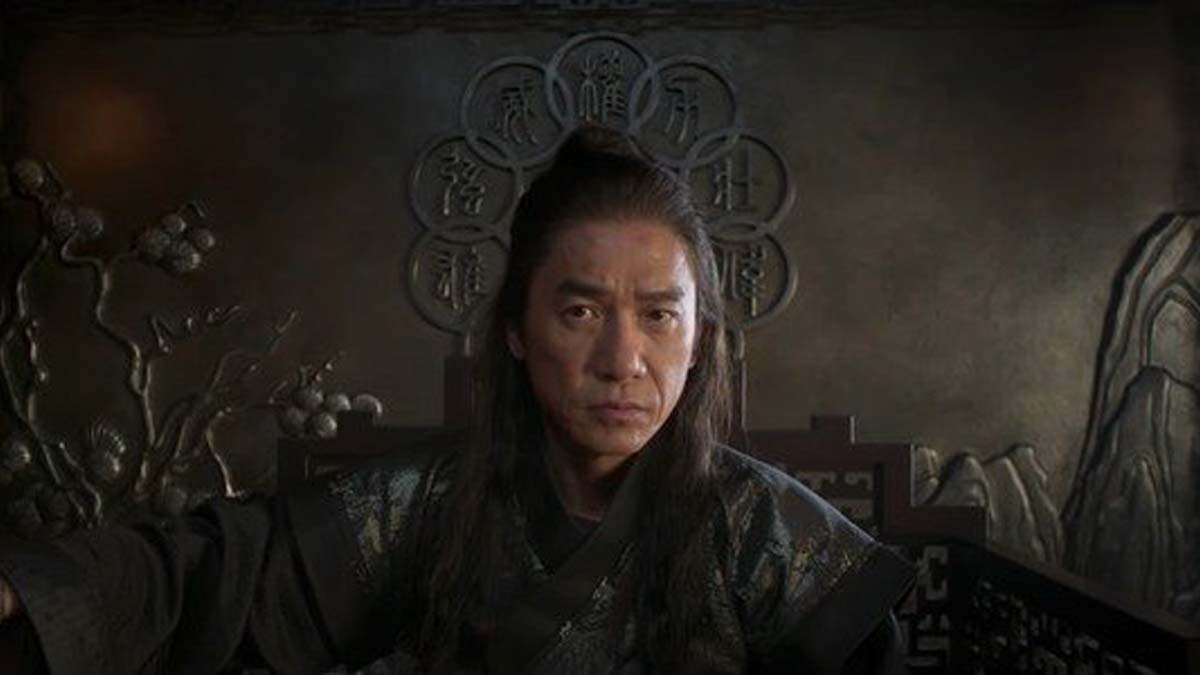 But maybe that’s more of a comment on Tony Leung and how likeable and charming he is as a character who did nothing but kill for centuries, only to have the woman he loved murdered for his past actions.

One of the bigger surprises is the return of Ben Kingsley as Trevor Slattery, or better put the extent of his role in the movie was the real surprise, because he’s in it a lot.

And really this speaks to the magic of the MCU. I’m sure it was never the plan for Trevor Slattery to return, after the somewhat mixed reception to the Mandarin in Iron Man 3, being a fake-out – this not only brings back one of the funnier villain twists, but uses it to further address the real Mandarin, or at least this new MCU version of him. 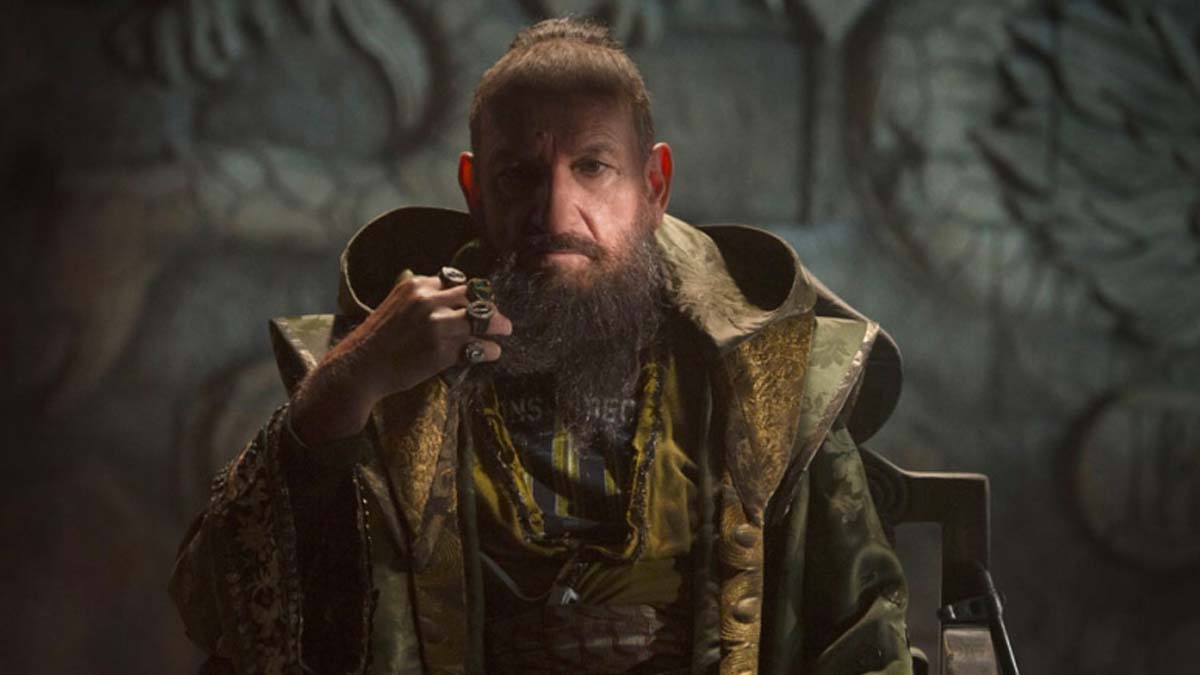 Rounding out the core cast of the movie is Fala Chen as Ying Li, Shang and Xialing’s mother, and Michelle Yeoh as Ying Nan, Ying Li’s sister and leader of the defenders of Ta Lo.

I’ve already mentioned how Shang-Chi combines a more traditional martial arts style with the kind of wirework we’re used to seeing in older films, but it’s worth mentioning again just how cool it looks, and how it brings something very unique to Shang-Chi – creating its own visual style and almost a language.

I do think one of the weaker parts of the film is right at the end, and I’m not saying the VFX aren’t amazing and the spectacle of two huge dragon creatures fighting each other isn’t awesome – because it is – but it does feel a bit of a shame to have so much awesome martial arts throughout, but then the end fight being a huge CGI dragon fight.

Overall Shang-Chi and the Legend of the Ten Rings is an incredibly fun, smart, well-made movie that is a great addition to the MCU – I said that Black Widow brought the MCU back to the big screen in style- and although that’s true, I think Shang-Chi is what MCU fans needed.

Although WandaVision, Falcon and the Winter Soldier, Loki, and Black Widow have all been really different and great, no matter how game-changing they all are (Loki in particular) it’s been so long since we got a solid stand-alone adventure with a brand new team and hero.

And Shang-Chi delivers all of that into a huge fun, MCU Martial Arts epic. The movie is expertly directed and crafted to be something new and different for the MCU, all while working within it really well. As any MCU movie should, had me wanting more, and got me excited for where everything is headed next with several intriguing teases from established characters and the introduction of some great brand new ones. 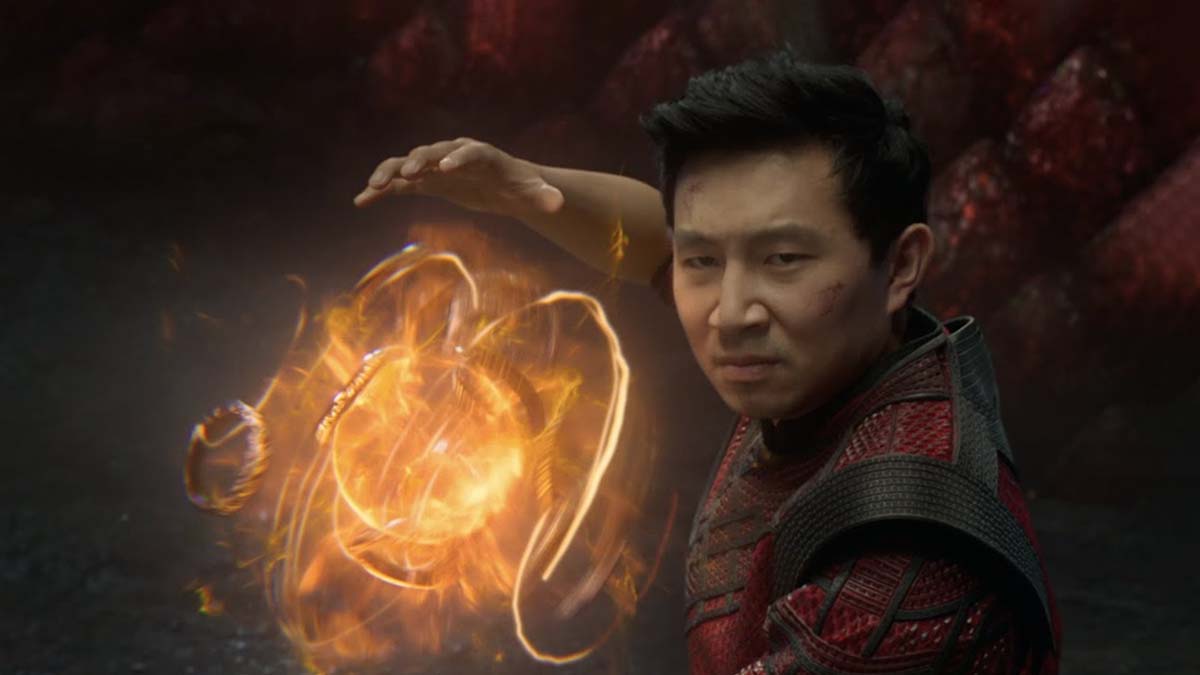 Thanks to anyone who has made it this far into my ramblings – if you liked it please like and subscribe to the channel for lots more MCU, Superhero, and Pop Culture Content, and let me know your thoughts on Shang-Chi or any of the other recent MCU projects in the comments below… 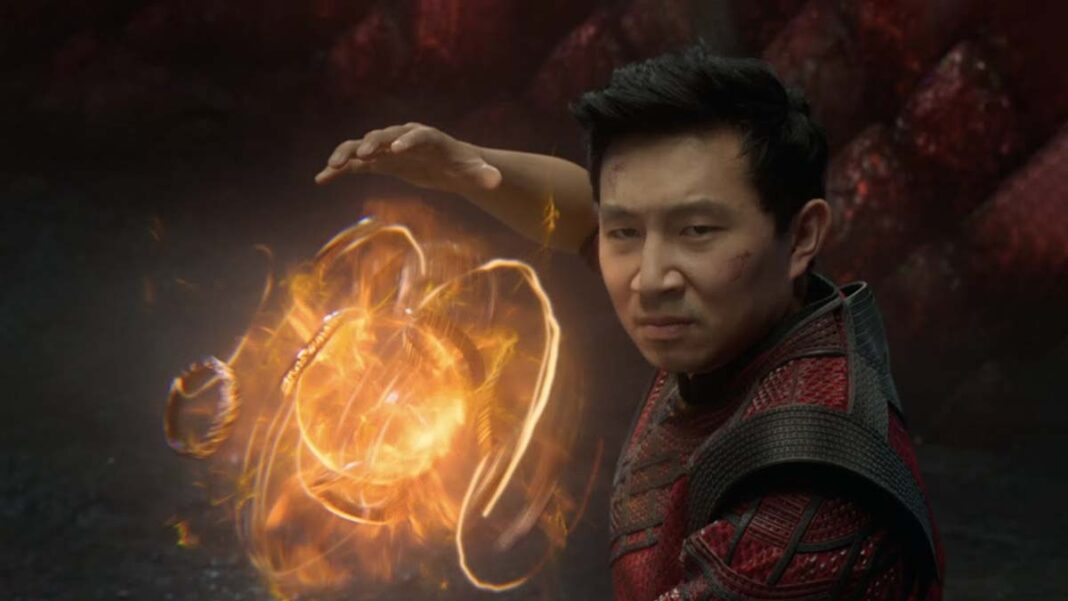