The Falcon and The Winter Soldier: Race, Redemption, and the Rise of a New Captain America

Jupiter’s Legacy is Netflix’s latest comic book adaptation to bring a more realistic take on a superhero story. The first series or sorry “volume” introduces its audience to a world where superheroes have existed for over one hundred years, but as they age and their children rise up to take over, all of the heroes start to wonder whether it’s time for new rules and a new moral code.

Jumping straight into the story, the show alternates between two separate time periods.

The first is modern-day, where an ageing group of Superheroes known as the Union, this universes Justice League or Avengers – who are ruled by a moral code, which prevents them from killing super villains, intervening in politics or trying to take any leadership roles. As the Union’s leader, The Utopian says, it is their job to inspire, not lead.

And without getting into too many spoilers – their world is shaken when a young superhero kills a villain but is widely supported by the American people for doing so. 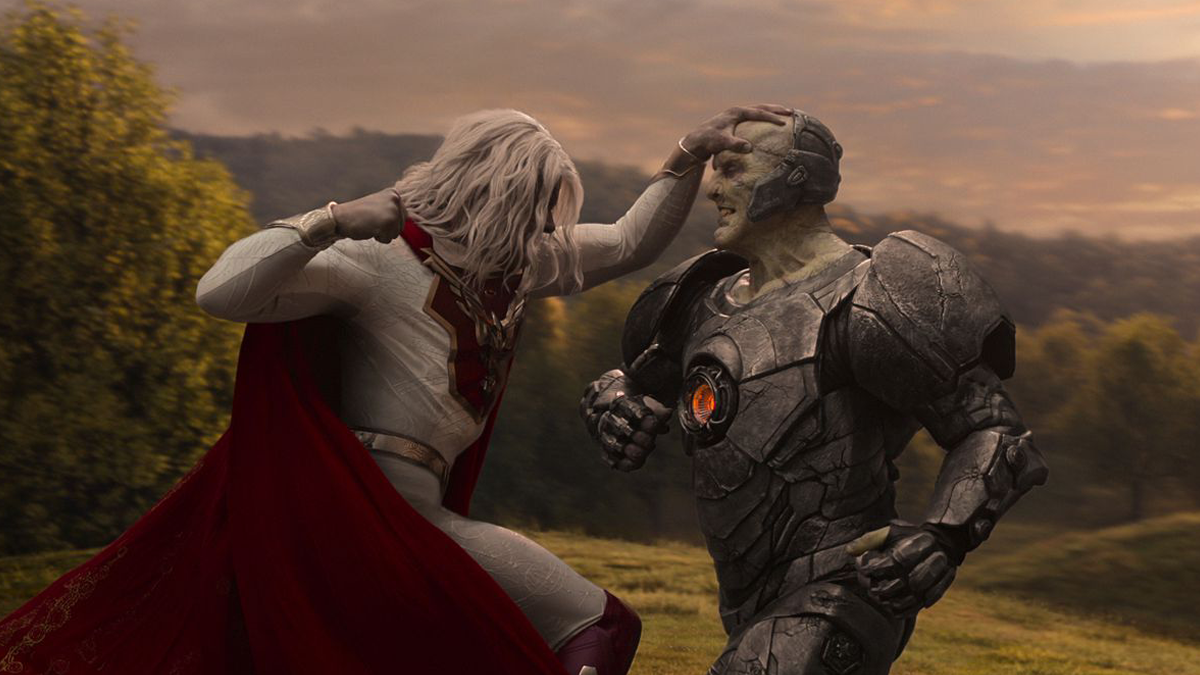 Making a divide in the older and younger members of the team (although even some older members side with taking more drastic action against villains).

The other time period the show switches back and forth from is the 1930s, where it shows the original six members of the Union – some of whom are still around and leading decades later.

The past storyline shows not only how they got their powers in the first place, but why their dated code is so important. 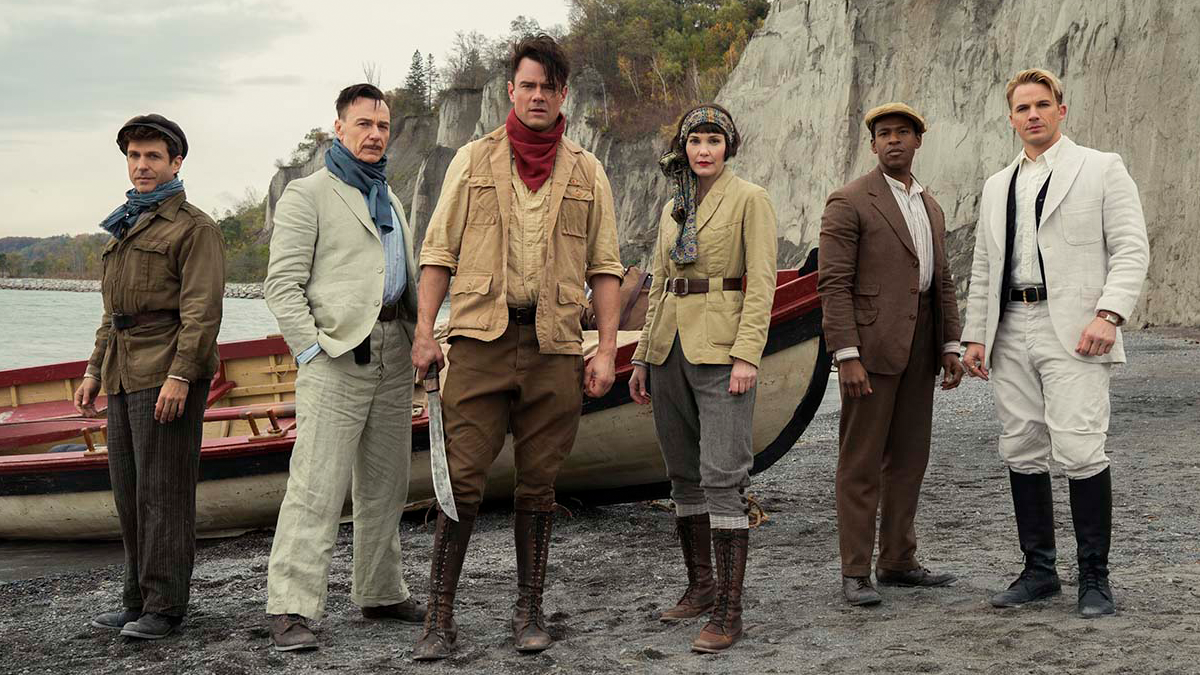 Although there isn’t always a direct correlation between what’s happening in the past and present (personally I like my flashbacks and flash-forwards to mirror emotional arcs), both storylines although they take a while to get there tell a really interesting story, and something that undoubtedly feels familiar in the age of Superhero movies and tv shows – and yet has something different and unique.

The real core of the series revolves around Sheldon Sampson, aka the Utopian played by Josh Duhamel. In terms of character The Utopian is essentially Superman, but more specifically the original 1930’s Superman, with unshakeable morals, and a deep-rooted sense of helping people, and so very very American.

For anyone who just thinks of Josh Duhamel from the Transformers movies, Jupiter’s Legacy shows off just how good he can be when given the right material. He nails three very different versions of Sampson. 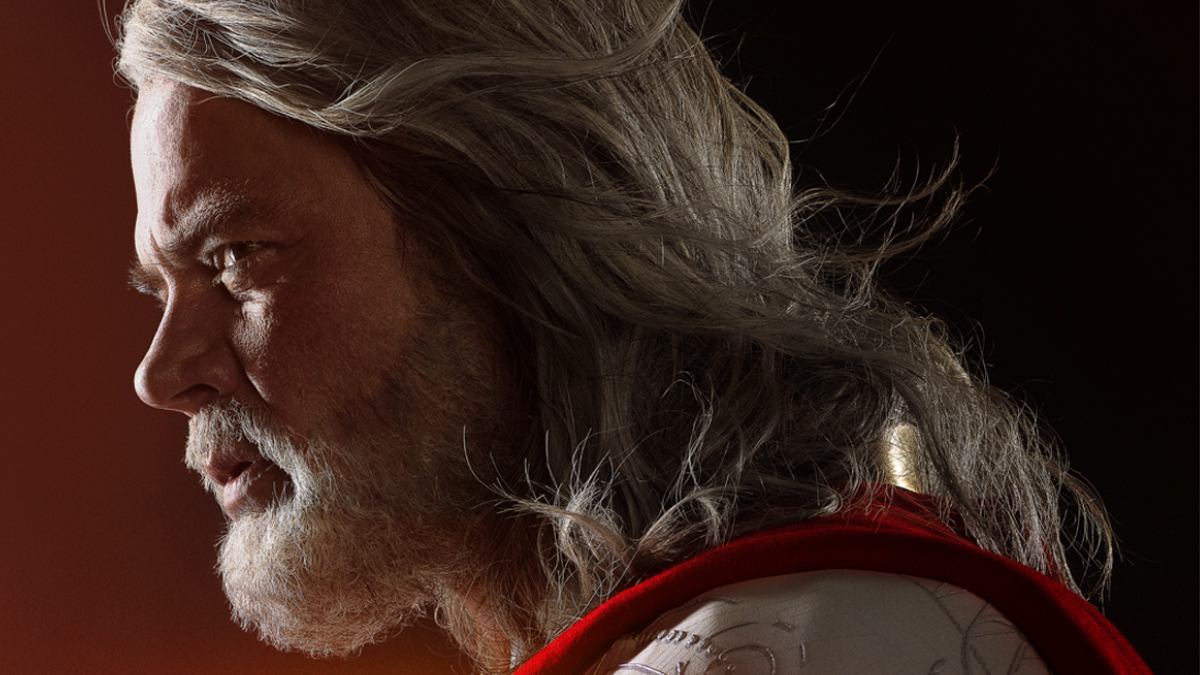 The first is the modern-day ageing Superhero, who struggles with a changing world and his place in it. He only knows his allies by their superhero aliases, and not their real identities, he pushes his son too far to be like him, he completely pushed his daughter away.

And although he has a seemly good relationship with his wife and brother (fellow founding members of the Union) even they are perhaps more fraught than he realises. 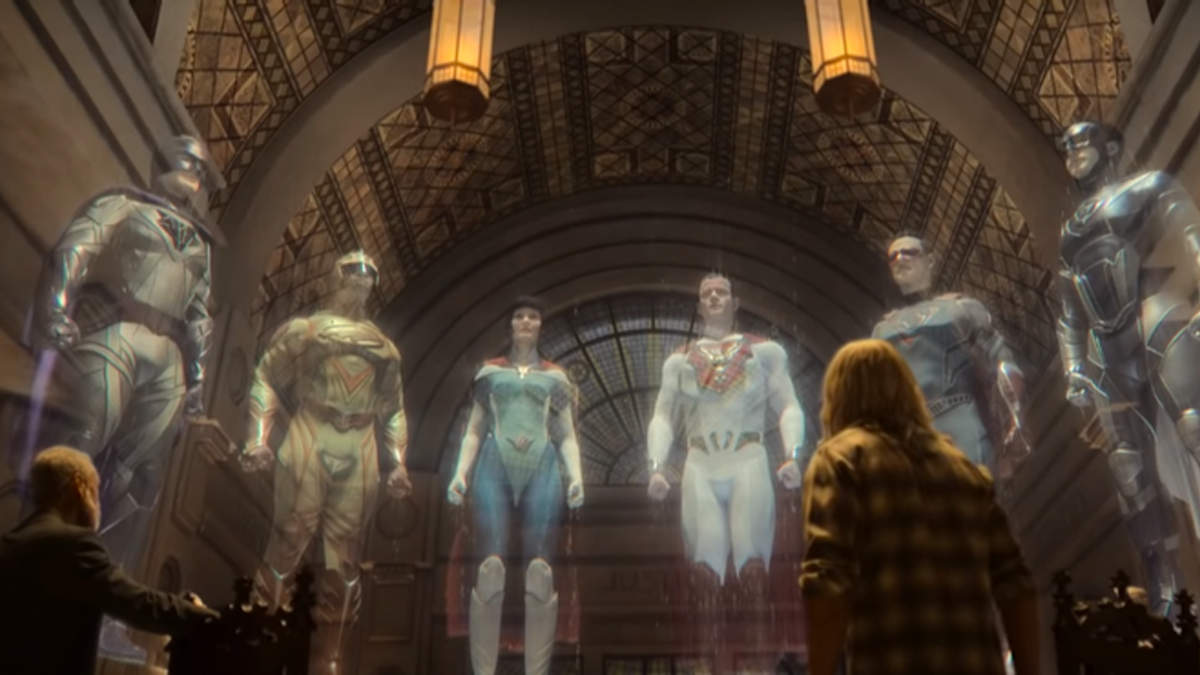 And the third is the 30s Sheldon after his father’s death, where mysterious visions appear to him and seemingly drive him insane.

Duhamel brings something different, and yet wholly authentic to each version of Sampson, and proves to be a great choice to revolve the series around.

Sheldon’s son is Brandon Sampson, known to the wider world as The Paragon, played by Andrew Horton. 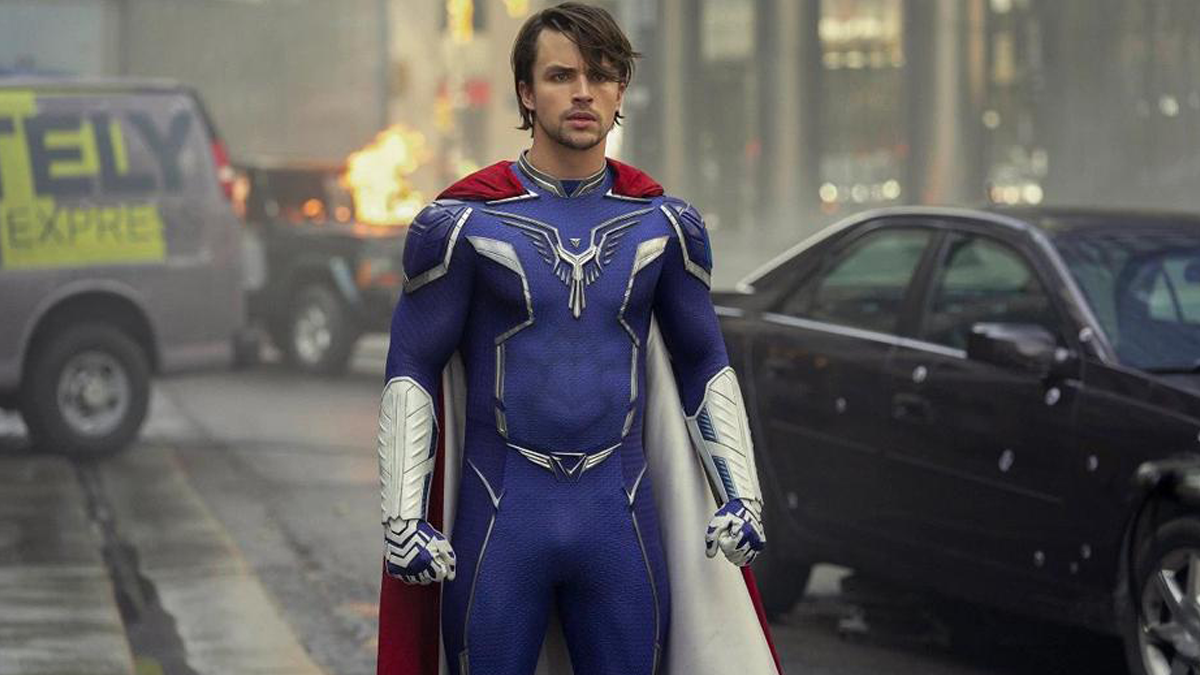 Brandon shares many of his father’s superpowers although doesn’t have some things like heat vision (yet), but his biggest struggle is the pressure and expectation on him, to replace his father and lead the Union.

Brandon’s arc is perhaps the most interesting, as I think the easy route for the show would have been to have him turn against his dad in the wake of public support for killing superheroes, and be sort of “no my way is the new way old man”.

But instead, it goes a very different way, with Brandon really taking a deeper look at his own values and why his father holds his own values so close. 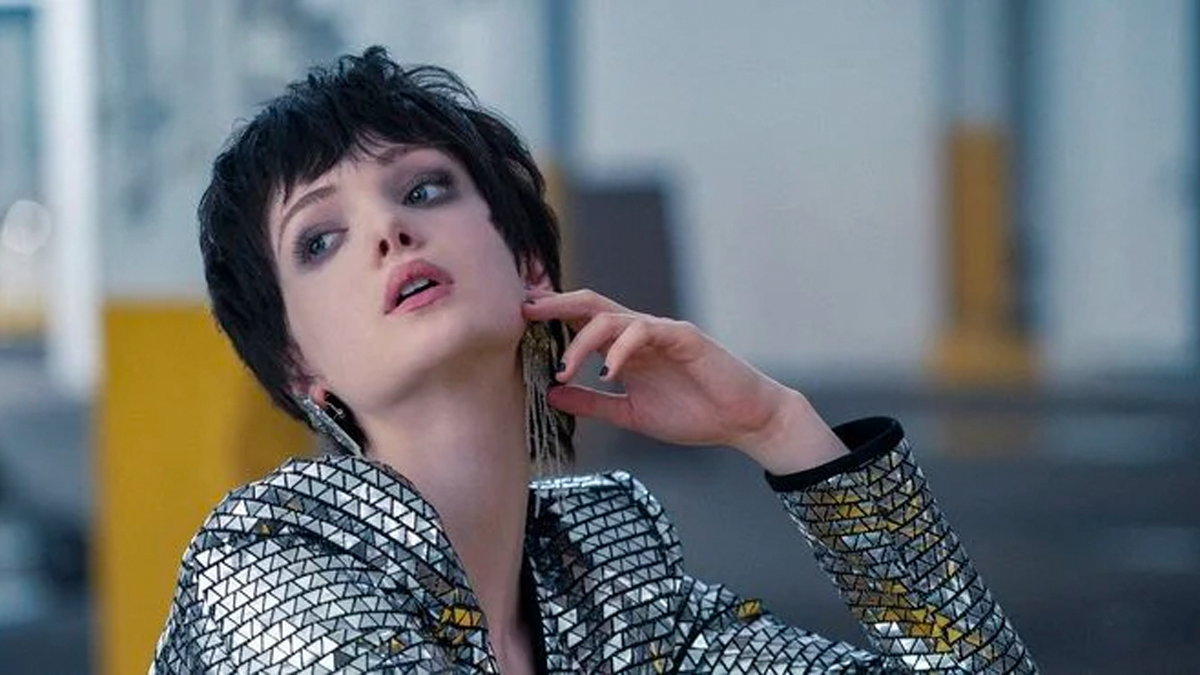 But if the difficulty between Brandon and Sheldon wasn’t enough parent-child dysfunction for you, then it’s Sheldon and Chloe’s that takes everything to a new level.

Where Brandon is very much the prodigal son – played by Elena Kampouris Chloe has completely abandoned her superhero ways, and is instead a drug-addicted model who simultaneously seems to want nothing to do with her family, and yet something keeps pulling her back.

The core Sampson family is rounded out by Leslie Bibb, who plays Grace Kennedy-Sampson aka Lady Liberty – Sheldon’s Wife and Chloe and Brandon’s mother. 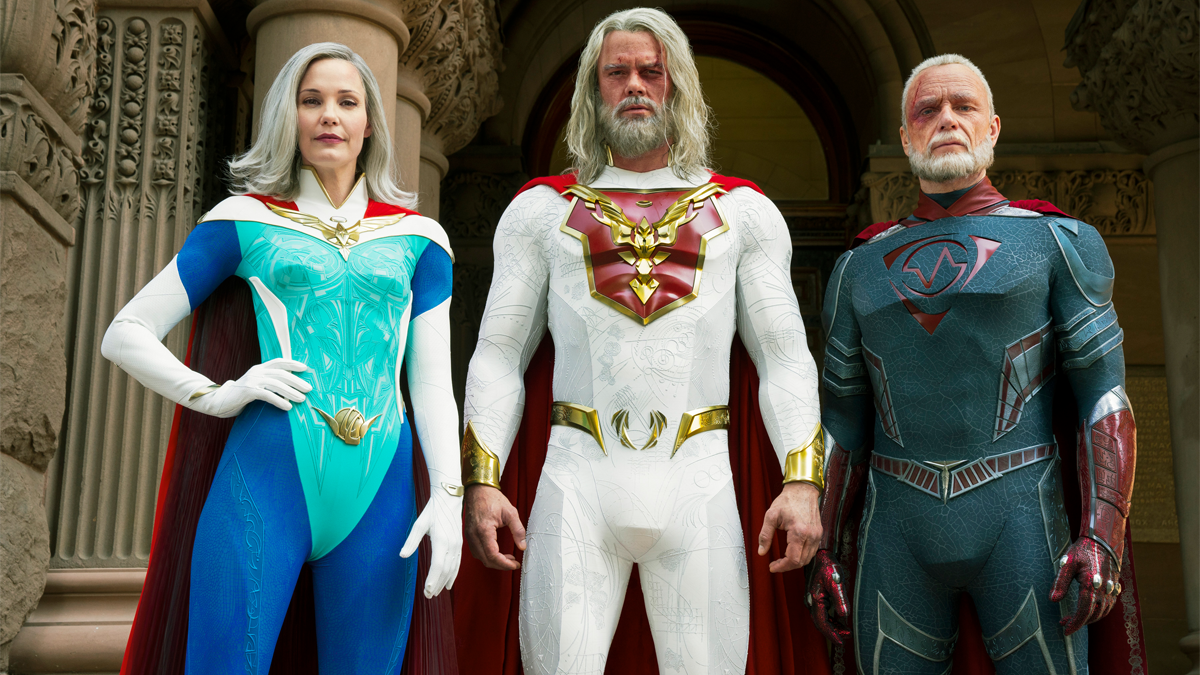 Grace has her own strained relationship with her children, whether or not to kill, and openly argues with Sheldon as to why their code doesn’t work or apply anymore – and yet she might be the most neglected and taken for granted by Sheldon out of everyone.

Her arc doesn’t go too far in this season, but it lays plenty of groundwork for more in the future.

George Sampson aka Brainwave is Sheldon’s brother, and another key member of the original and current Union – George is key to both Sheldon’s pre-power storyline in the 1930s and the modern-day one – with a lot more to him than it might first seem. 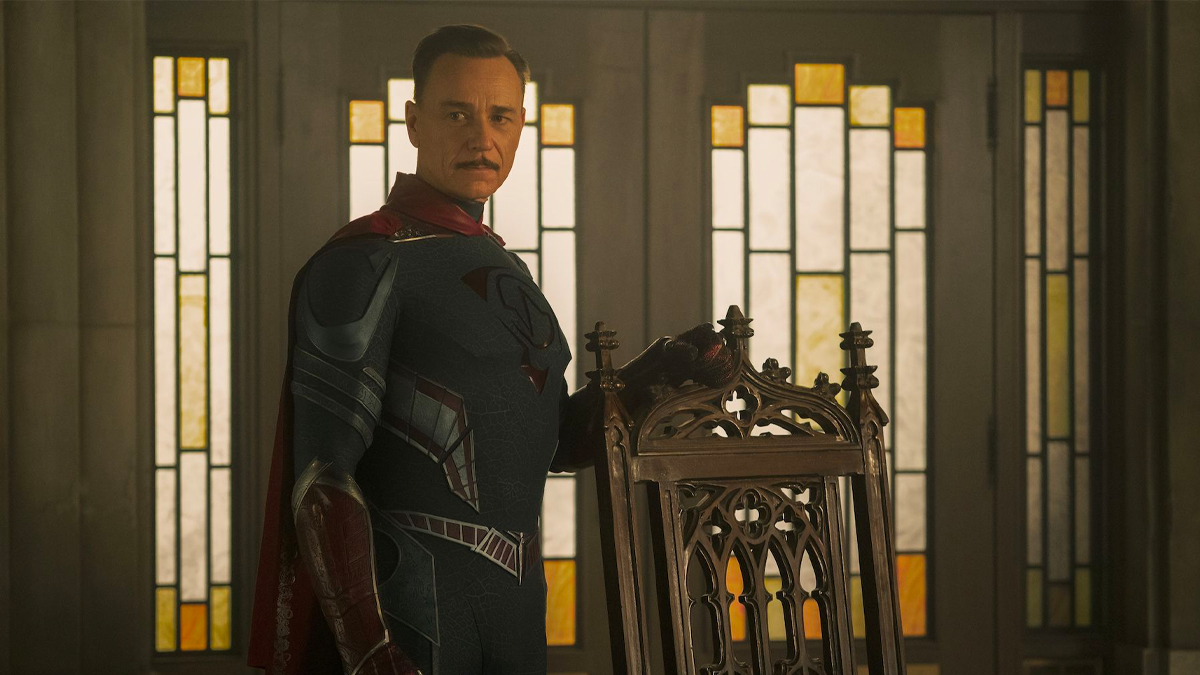 The rest of the main cast is rounded out by Mike Wade as Fitz Small aka The Flare, an engineer with flame-based superpowers who was one of the original six members of the Union, who like the Sampson’s now has a child on the team.

Then there is a range of other supporting characters in both time periods that help show each of the main characters emotional journey.

One stand out that I haven’t mentioned yet is Matt Lanter’s George Hutchence aka Skyfox who was Sheldon’s best friend since childhood in the 1930s and eventually a fellow member of the Union. 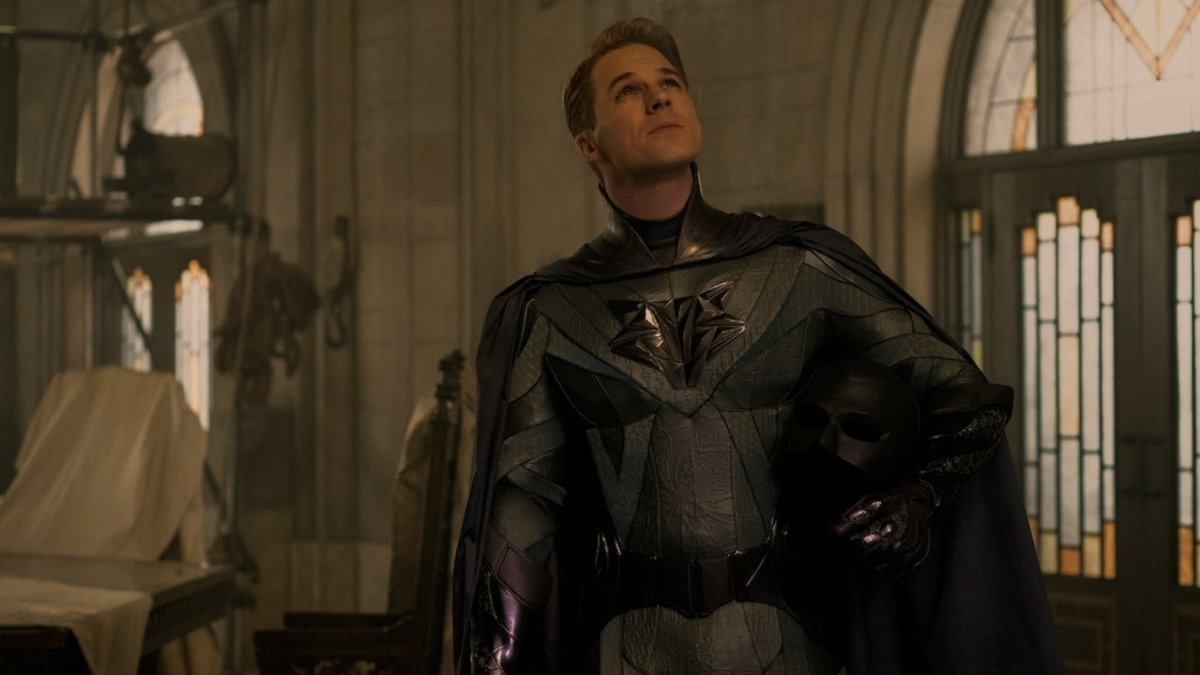 George is mostly absent from Jupiter’s Legacy modern storyline, after turning against the team and becoming a villain, but mainly as he wanted to do more to help, and hasn’t been seen in years.

His son Hutch (played by Ian Quinlan) is looking for him, and ends up dating Chole, but generally speaking what actually happened to George and his turn against the team is still a mystery.

But what we do see of George, an apparently carefree high society man of the 1930s who hides his own troubles and problems is another of the shows standouts – and really my main criticism of the show is that there just wasn’t enough of him. 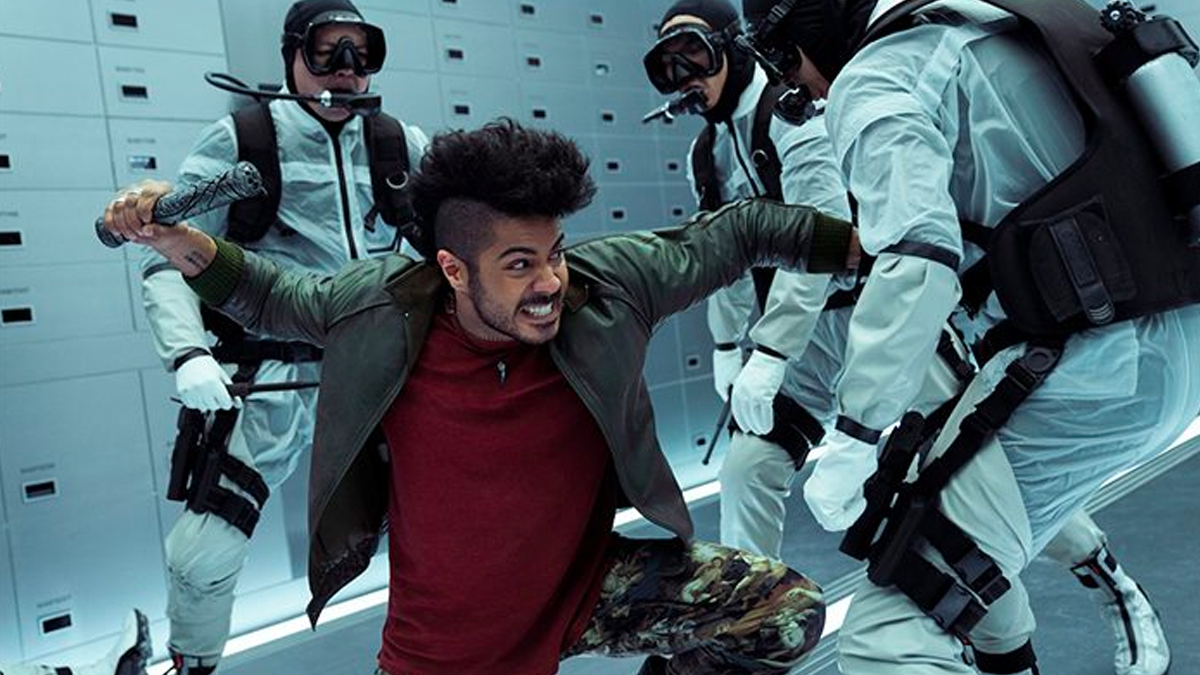 Although there is some gore, sex, and violence, and the show is taking on some deeper themes and emotional issues – it doesn’t really have a direct comparison in terms of other superhero-based movies and tv shows.

Going in you’d be forgiven for thinking that Jupiter’s Legacy is Netflix’s answer to Amazon Prime’s The Boys – and in some ways I’d still argue that – there is undoubtedly a similar vibe in terms of seeing the truth behind a team of superheroes, jumping straight in to. A world very used to heroes and not origin stories like we’ve seen in many MCU and DC movies…

And yet in its delivery, and the themes the show explores it’s totally different to The Boys, and most other superhero shows. 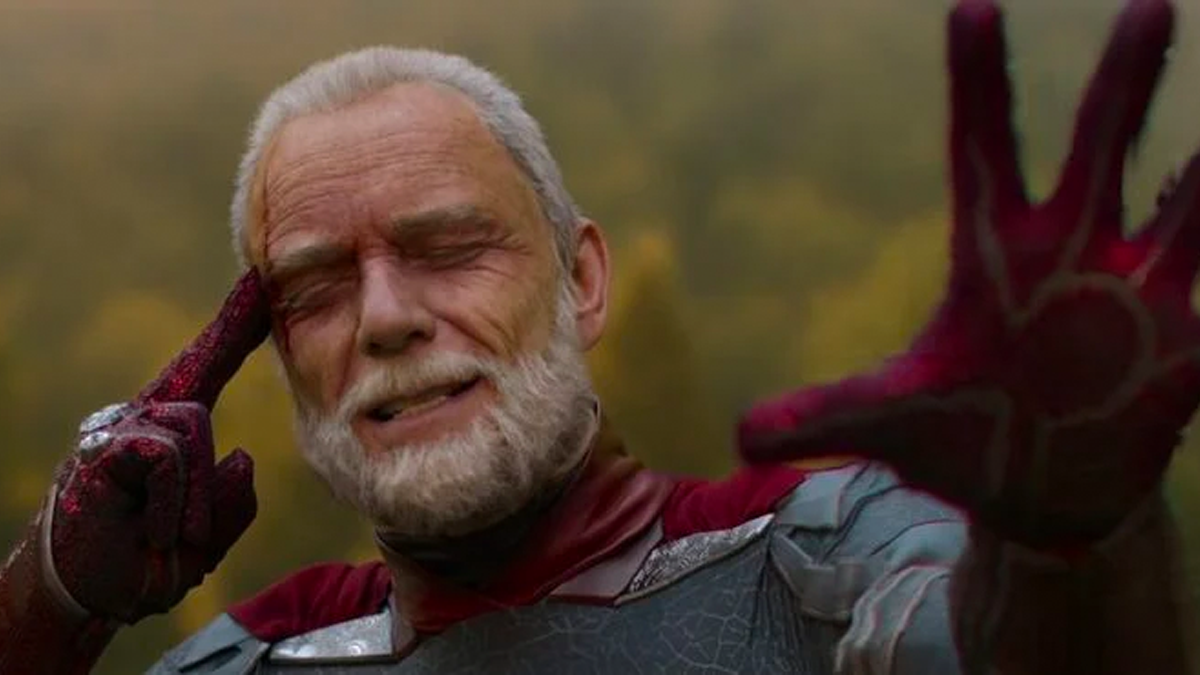 It depicts a parallel universe where superheroes appeared during the Great Depression and carried those American dream values forward one hundred and twenty years, only intervening where they had to – and trying to give the world as much freedom as possible.

And with that it brings up the idea on whether that was the right approach – Skyfox for example left the Union and became a villain (or so it appears), because he wanted to do more for the world, and going into future seasons, there’s a definite a case for how he was right.

The Utopian’s ideas maybe don’t translate into the modern-day, but the show also introduces the concept of whether they were ever the right thing to do. 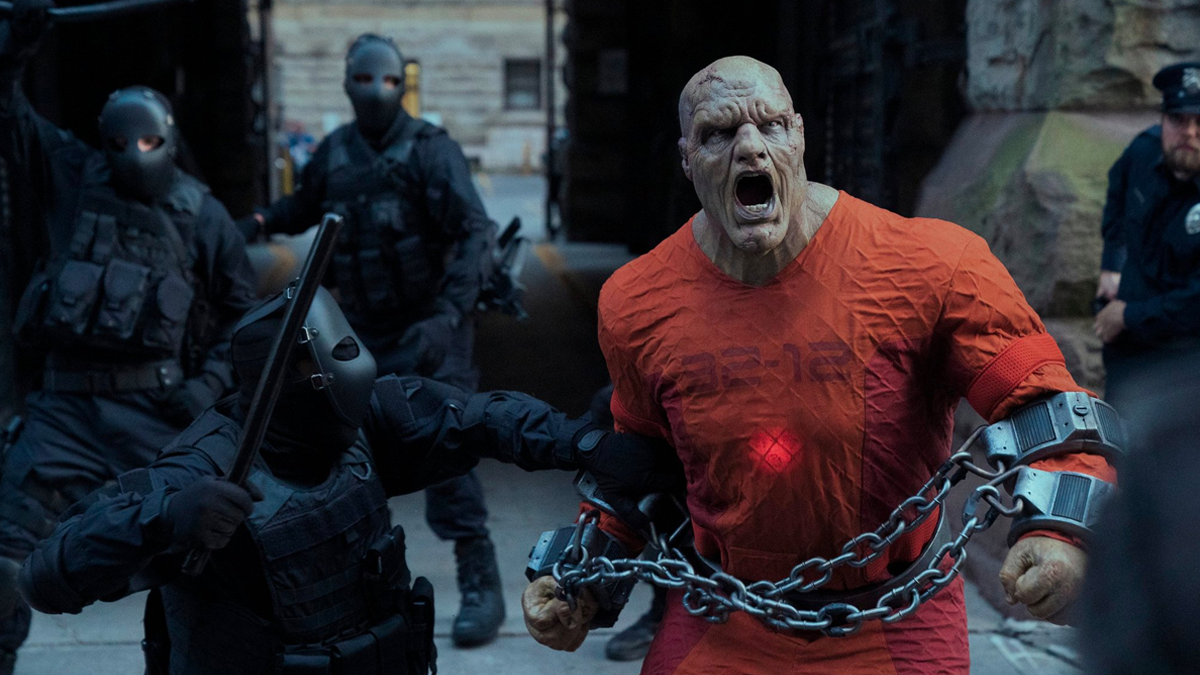 We get hints at heroes feeling like they could have done more to help during World War II, and other conflicts…

And thanks to a pretty huge twist in the final scenes, it’s clear more people than we realised don’t agree with the way The Utopian has been running things.

Sampson’s argument is that he doesn’t want to take away peoples’ freedoms and that killing villains is the easy way out, it’s lowering yourself to their level – but the show brings up the idea of how much that works – and is not killing supervillains (who will just break out and hurt more people later on) actually what is taking away people’s freedoms? 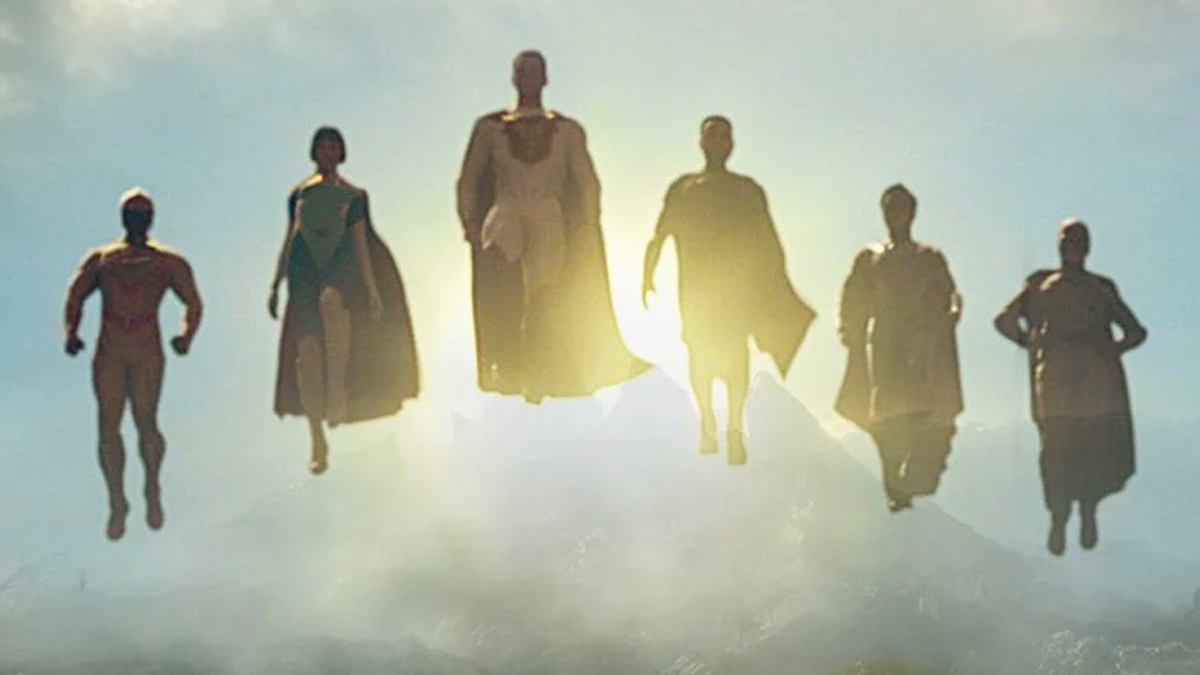 Overall there is no denying that after the first episode ends on a big action sequence there is more talking, mystery, suspense, and ideological conversations than there is action, and some would say Jupiter’s Legacy is too slow.

But personally, I don’t think that’s a bad thing – we’ve got so much superhero content these days, and something taking those ideas and tropes and doing something a little different with them, can only be a good thing. That and there Is still action in most episodes, it’s just definitely not the focus of the show.

But all in Jupiter’s Legacy provides a great new Netflix show, a solid start for the Millarworld universe on screen, an interesting adaptation for comic book fans (with plenty of big changes from the original comics), and most importantly just a genuinely engaging superhero hero show with something different to say. 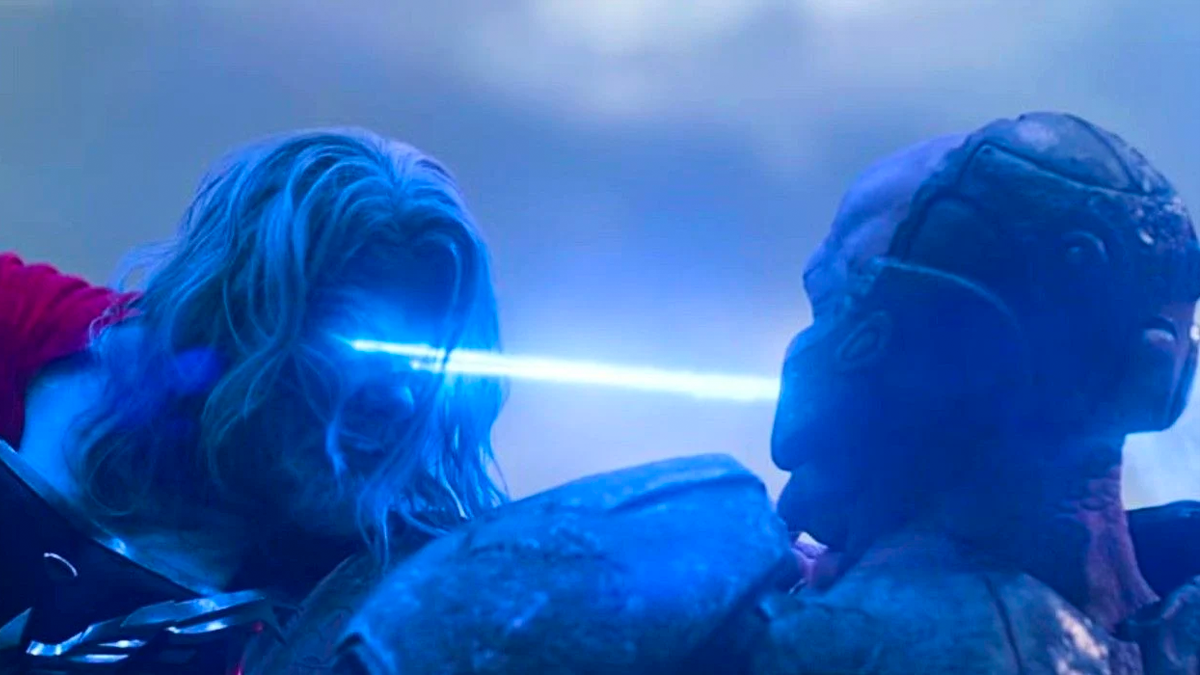 It may not be for everyone, but the show tells a bunch of compelling stories and introduces tonnes of fascinating characters – all of which add up to a great start for the series. Thanks to anyone who has made it this far into my ramblings – if you liked the video please like and subscribe to the channel for lots more superhero, and pop culture content, and let me know your thoughts on Jupiter’s Legacy, in the comments below. 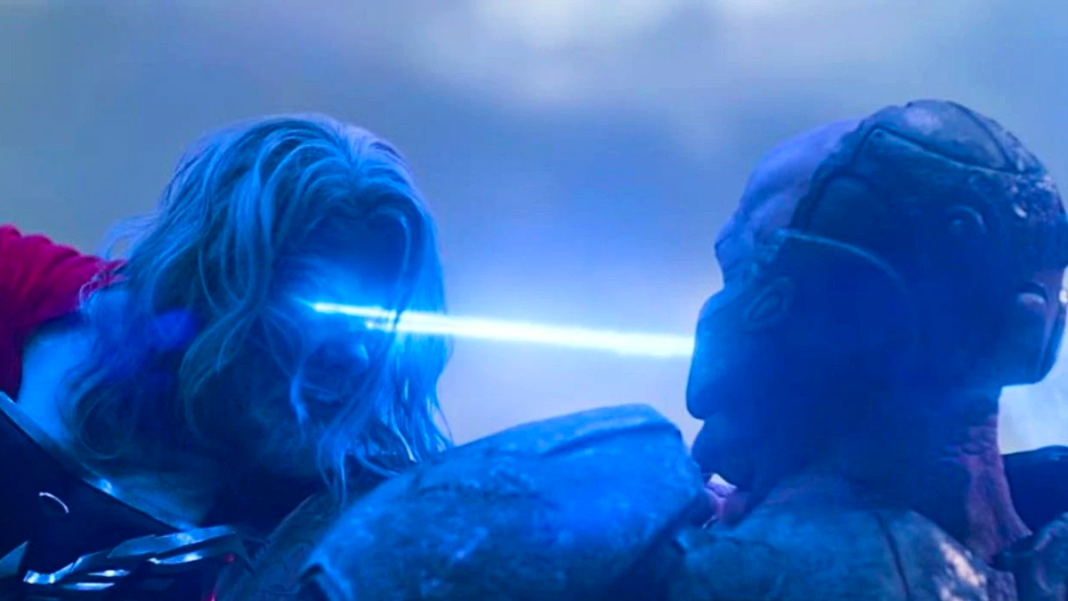 249
May 12, 2021
Previous articleThe Falcon and Winter Soldier: The Legacy of Captain America
Next articleThe MCU and Reinventing The Comic Books
© Newspaper WordPress Theme by TagDiv