Netflix’s Enola Holmes adapts the first book from the series by Nancy Springer, which follows Enola, the younger sister of Sherlock Holmes. The live-action adaptation sees Stranger Things’ Millie Bobby Brown take on the role of Enola in a charming fourth-wall-breaking iteration of the character, who is just as brilliant as her famous older brother. 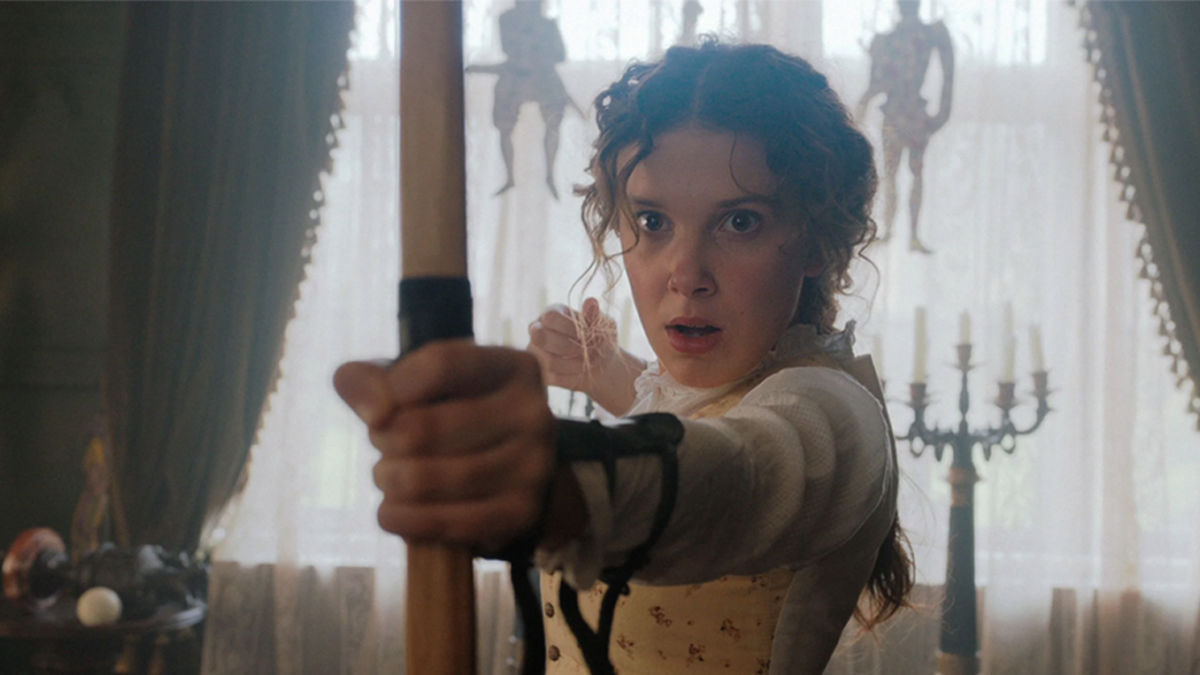 The story itself follows Enola, who is much younger than her brothers and has mostly been raised alone with her eccentric mother. But after her mother mysteriously disappears, Enola reunites with her brothers, evades Mycroft’s attempts to turn her into a traditional Victorian lady, and tries to uncover what has happened to her mother. Enola does all of this, whilst inadvertently helping the young Viscount Tewkesbury, Marquess of Basilwether, evade his own murder mystery, fight for voter equality and push for women’s rights (yes, its a jam-packed movie).

And yet despite so much going on, the movie really does work. It delivers two serviceable, although not totally unpredictable, mysteries, along with some great action, a fun style to the whole film, and most importantly some great performances.

The key to Enola Holmes’ success is undeniably the charisma and performance of Enola herself, played by Millie Bobbie Brown. The early rumours behind the project suggested that Brown and her sister were huge fans of the series and were a large part of bringing it to the screen, as evidenced by both this being Brown’s first producing credit, and her performance. 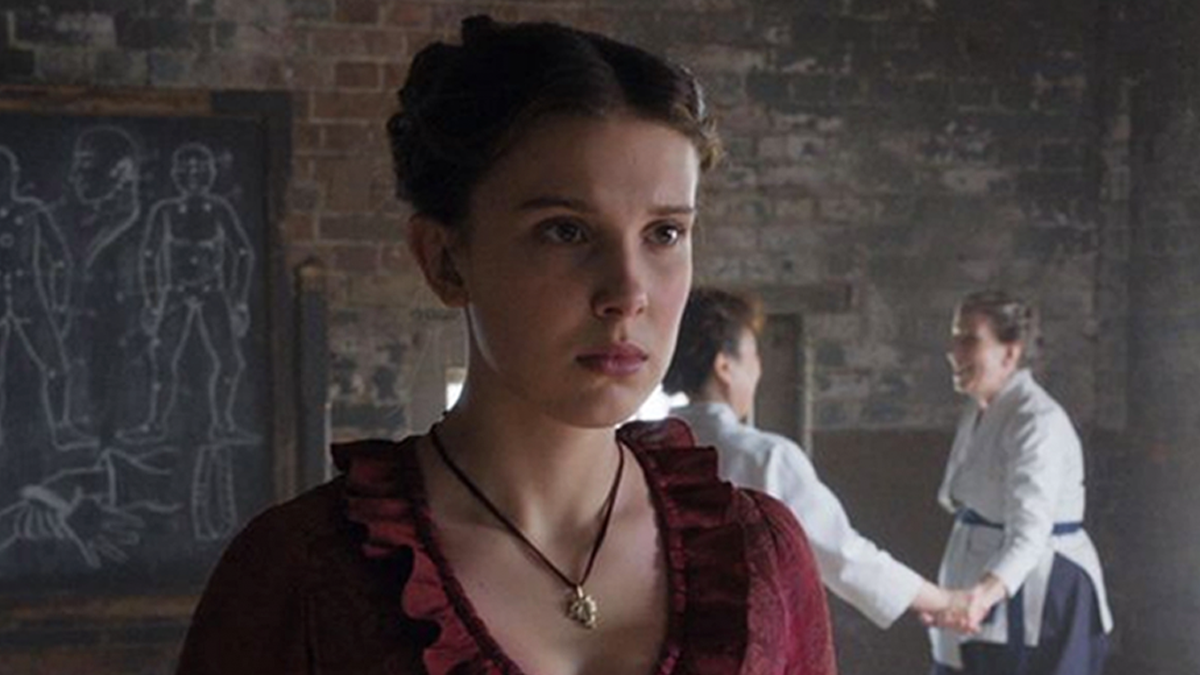 Enola is, of course, the star, but really stands out as leaps and bound ahead of anyone else in both performance and character development. In fact, I’d argue that thanks to the accessibility of the movie, it’s big stars, but most importantly Millie Bobby Brown herself, Enola Holmes could shaping up to be a role model on the level of Hermione Grainger.

The other big draw of the film is Henry Cavil as Sherlock Holmes. I’ll admit going into Enola Holmes; I had the idea that I’d prefer to just be watching a new Sherlock movie with Cavil as the star. 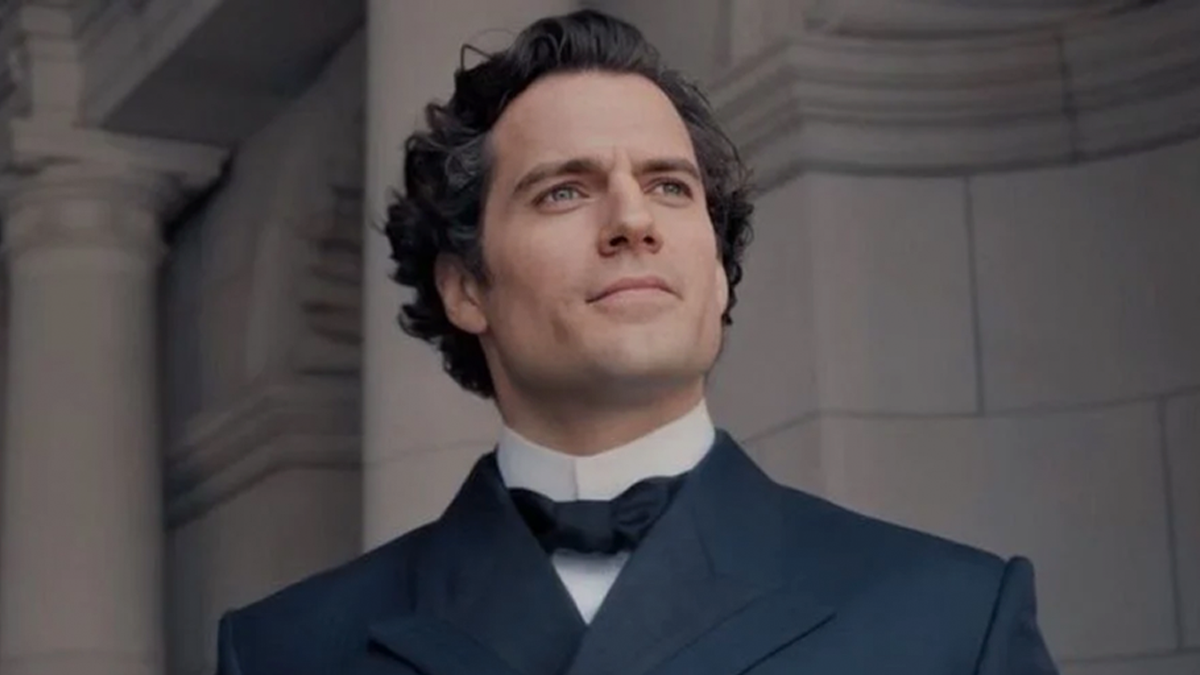 And although I still think Netflix could and should do that (perhaps the beginning of a Netflix Holmes-verse), there is no denying that there was just enough of Cavil to showcase his take on Holmes but keep the focus on Enola. 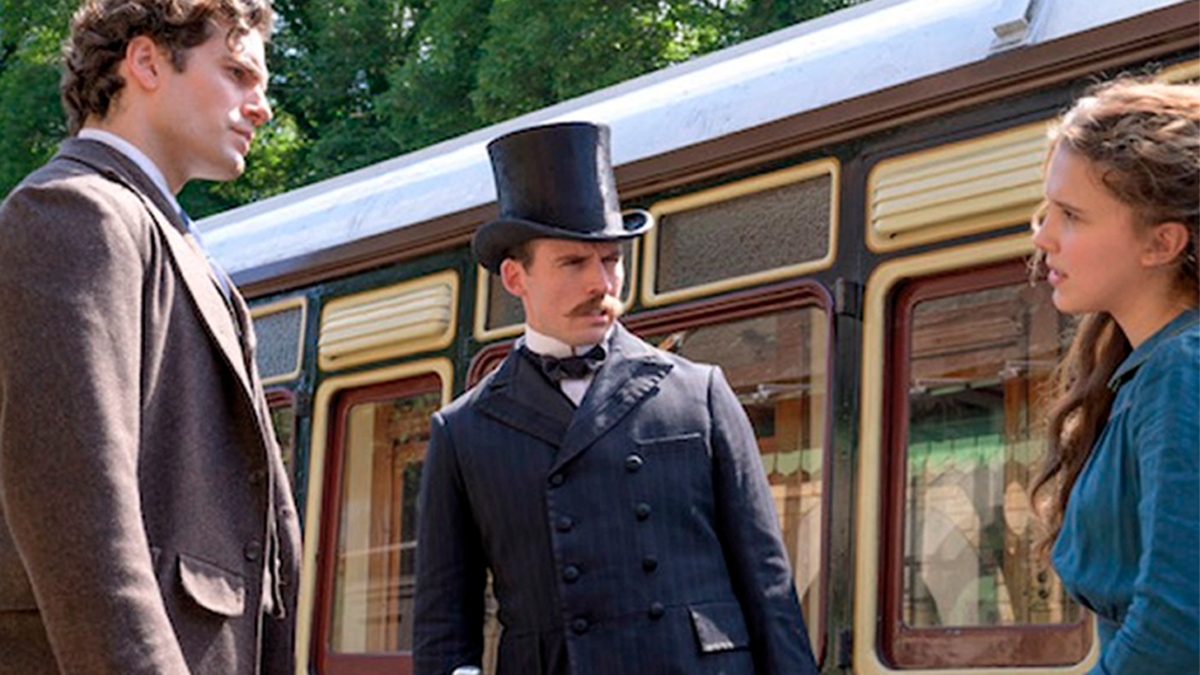 The final of the four Holmes family members to star in the film is the fittingly quirky Eudoria Holmes, played by Helena Bonham Carter. Eudoria is single-handedly responsible for Enola’s unique, era defying personality, and her attitude that she can do absolutely anything.

Although given Enola’s own deductive skills and other talents that seem to line up well with Sherlock’s, it does beg the question as to whether Eudoria taught all of the same things to Sherlock, and just missed Mycroft. 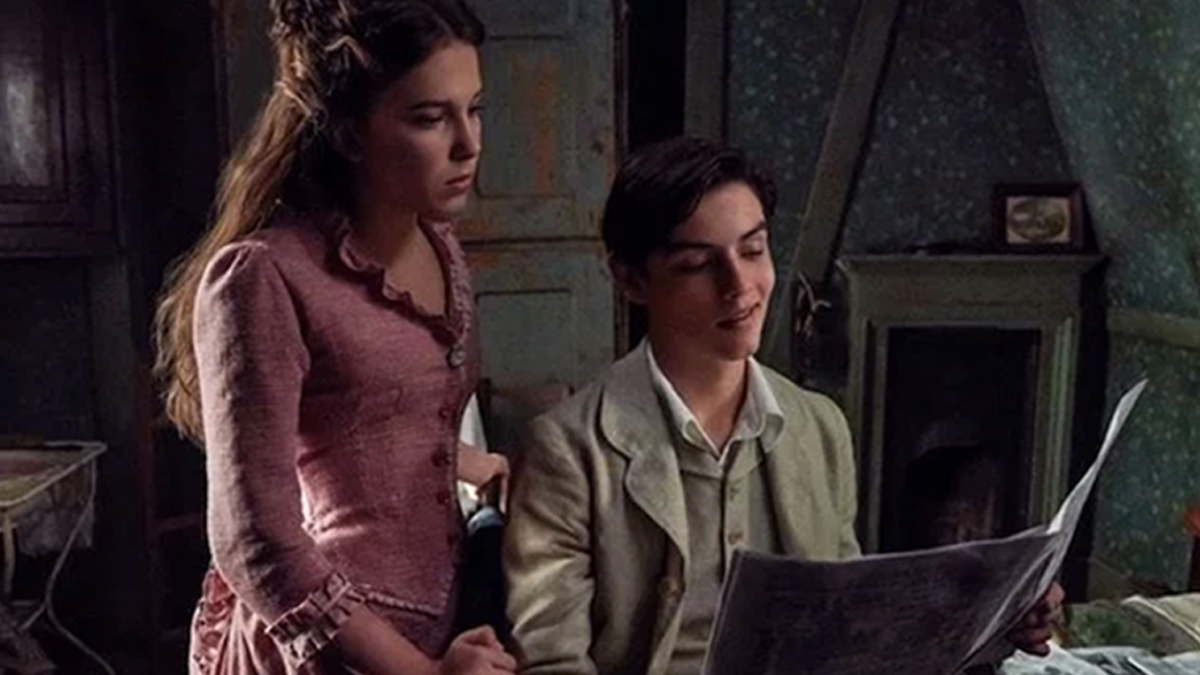 Filling out the rest of the main cast is Loius Partridge as Viscount Tewkesbury, Marquess of Basilwether. Partridge delivers an enjoyably dim lord in distress to Enola’s heroic saviour throughout the movie but does have his moments to shine as well. The chemistry between Partridge and Brown underpins a lot of the movie, and the two have an emotional arc that sees them both rise to new heights and hopefully change Victorian England for the better.

The rest of the cast is rounded out well by Adeel Akhtar as a bumbling Lestrade, Fiona Shaw as Miss Harrison, a villainous school headmistress set on truing Enola into a ‘proper lady’, Susie Wokoma as the combat expert Edith, Claire Rushbrook as the Holmes family housekeeper, and Frances de la Tour as Tewkesbury’s Grandmother, The Dowager.

The movie undoubtedly ends on a final, but hopeful note, one that seems likely to open the door to more Enola Holmes adventures in the future. I would, however, argue that the message of Enola becoming her own person, and finding her own path in Victorian London, is a little lost in how similar her character (at least on paper) is to Sherlock, but I’d also agree that doesn’t take away from the movie as a whole. 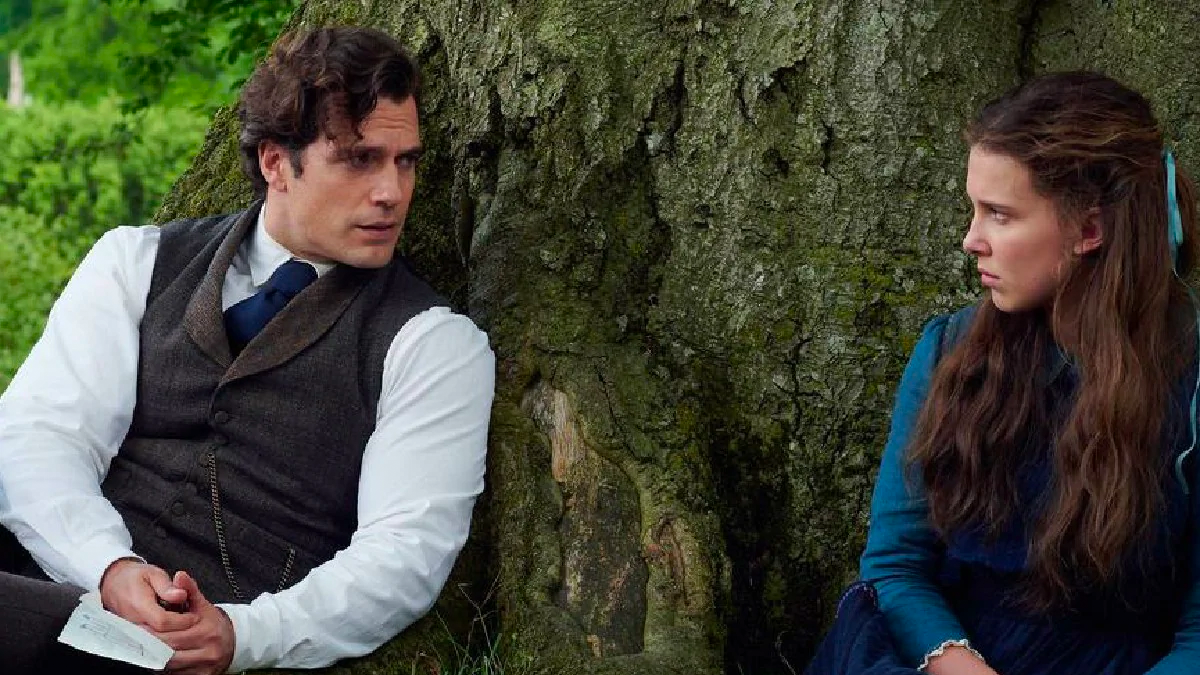 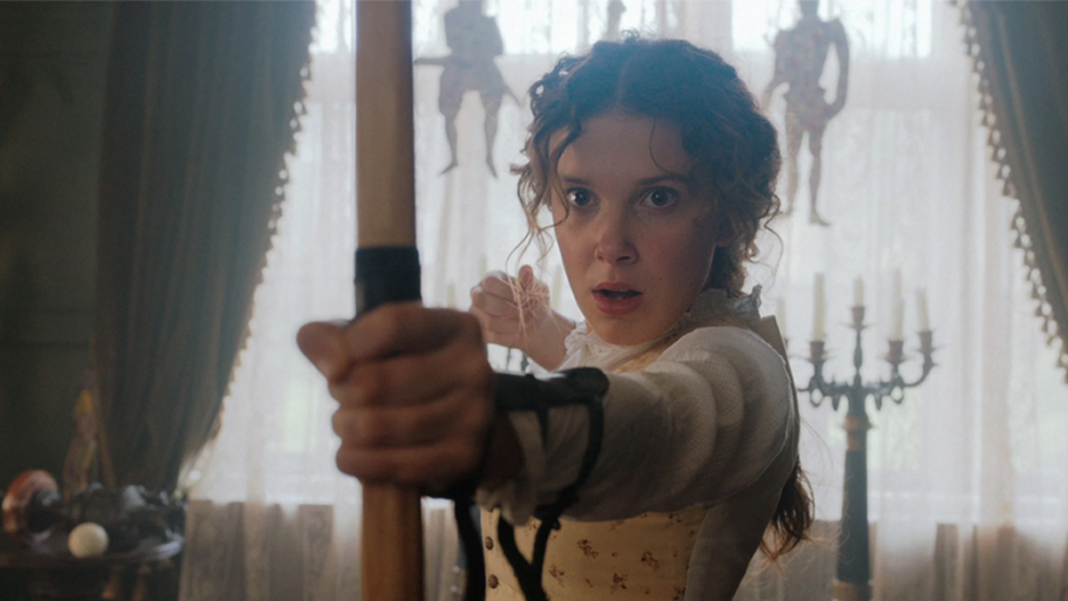