Mezco continues adding to their X-Men line with Gambit, and what has to be the most detailed and best 1/12 representation of Remy LeBeau. The figure comes with tonnes of accessories, looks amazing and has a huge variety of posing options, totalling to a truly impressive figure that is a must for any X-Men collector. 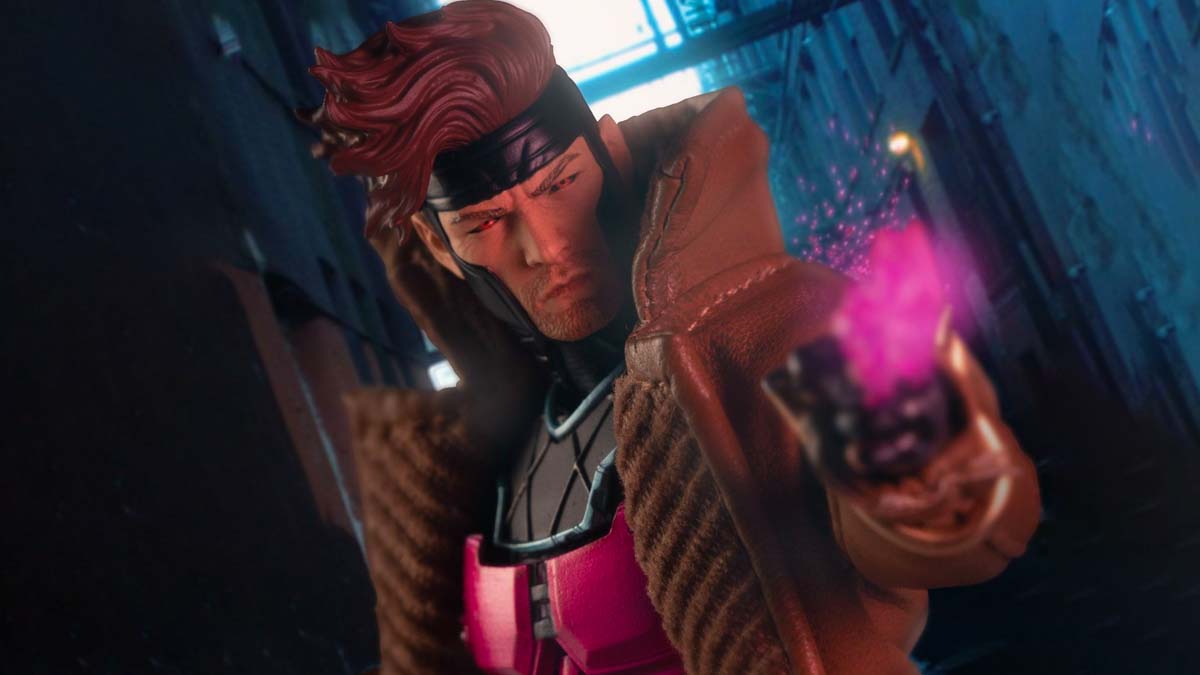 Inside the box is the figure, an extra head, extra hands, accessories, power effects, staff, and another X-Men Mezco stand, which is the same as the Cable and Cyclops one with the blue outer circle.

The hands include the usual fists, grip hands, staff holding hands, a card holding hand. The effect accessories include a single throwing card, a hand of cards, and then the same again but charged with Gambits kinetic energy. And a bigger effect piece that shows three of Gambit’s cards in motion as if he has just thrown them. 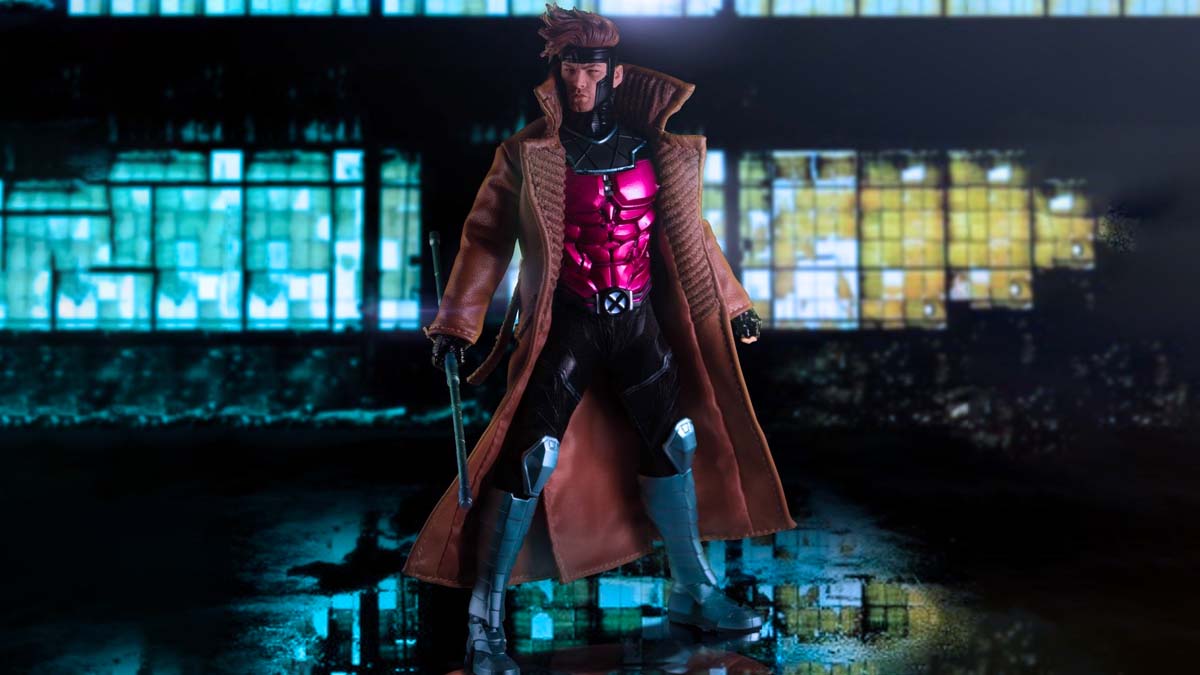 There are two heads, and both are extremely well painted and detailed. Gambit’s features, and most importantly his hair, are perfect. One is a plain-ish more serious expression, but the second head is the one that takes the cake. It’s basically the same but rather than a blank or serious expression, it has a very Gambit smirk (and will definitely be the one on the figure from now on).

Obviously, the main issue with articulation is the lack of much ab crunch, thanks to the torso armour piece, which is a separate harder plastic piece. For some people, this could be a huge, and understandable, issue why pay the higher price point of Mezco figures for a great looking figure that unfortunately has fewer posing options compared to the much cheaper Marvel Legends Gambit figure. 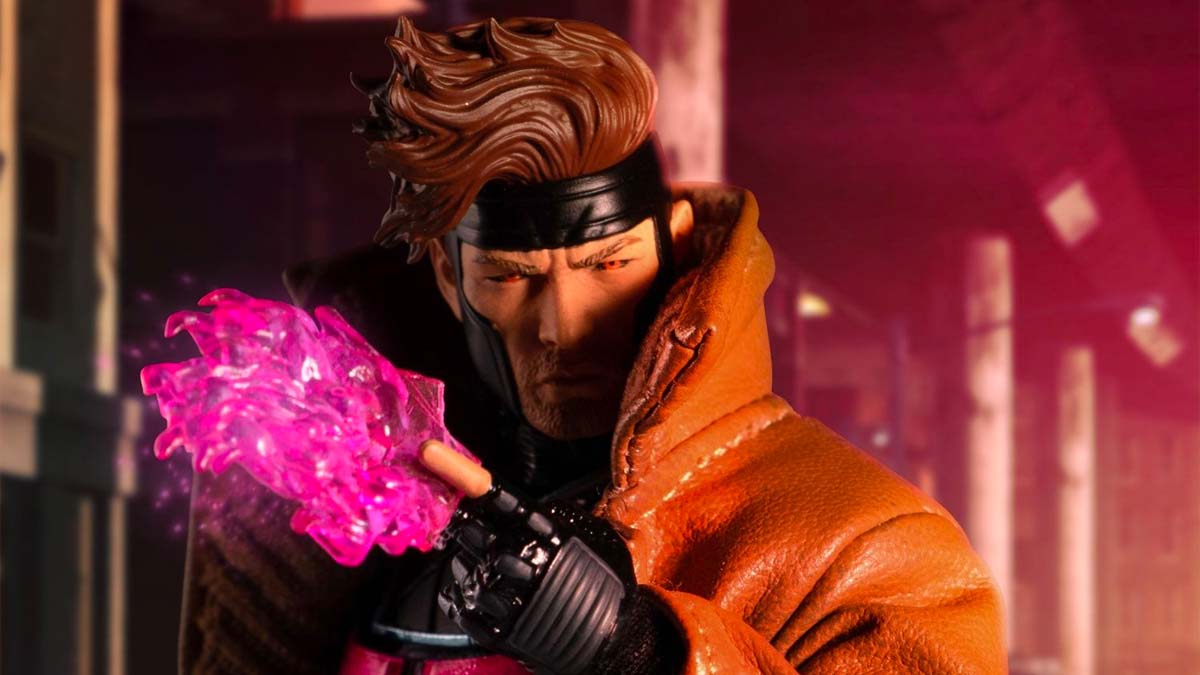 Additionally, thanks to the design of the boots, which have a small piece that goes from the ankle down into the boot, the ankle rotation isn’t great (a persistent problem with some Mezco figures).

The third and final issue with movement and articulation is Gambit’s Coat, which thanks to being a thicker, more realistic faux leather limits some arms movement. But the coat does have some wires to make for some more dramatic posing, and as with most Mezco clothes, it looks extremely realistic for the size and scale. 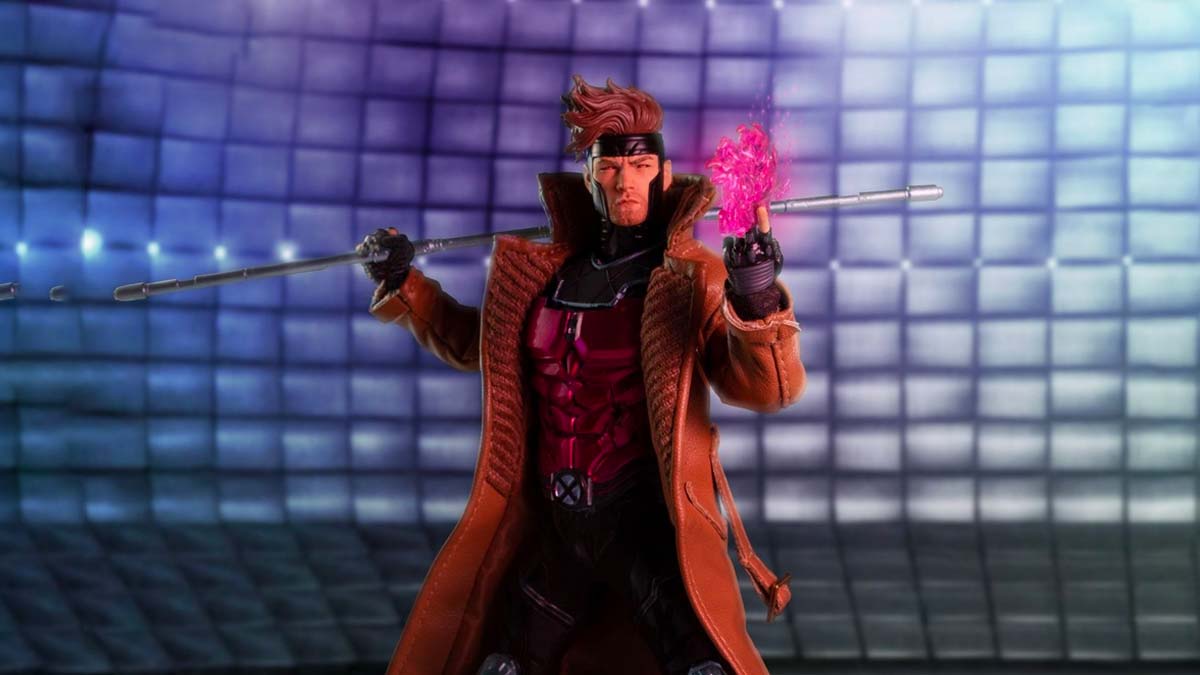 In all three cases its fashion over function for the figure, which might not be what many people want from their action figures, but personally the torso piece, ankle stiffness, – aren’t enough to make me dislike this figure.

In fact, they all look great and the concessions In posing are more than made up for with design and realism. 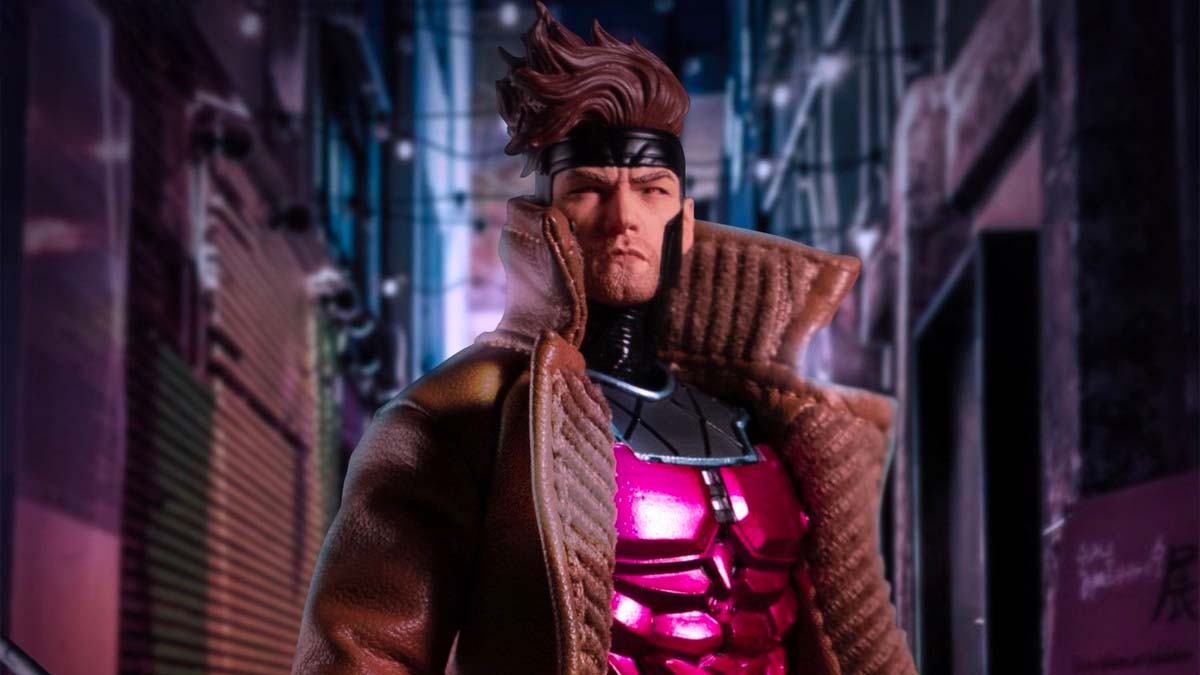 Aside from those issues, the arms, legs, hands and heads all articulate as well as most Mezco figures, and despite some limitations, Gambit can get in some pretty dynamic poses.

Ultimately, although limited in some posing options, Mezco’s Gambit is an incredible figure. The head, hand and power effect options give the chance to make all kinds of very Gambit poses. All of which is complemented by a simple, but realistic design from Mezco, that has some of their signature stylisation and realism, but mostly sticks to the idea of bringing a comic book character to life in a way that feels very true to the character. 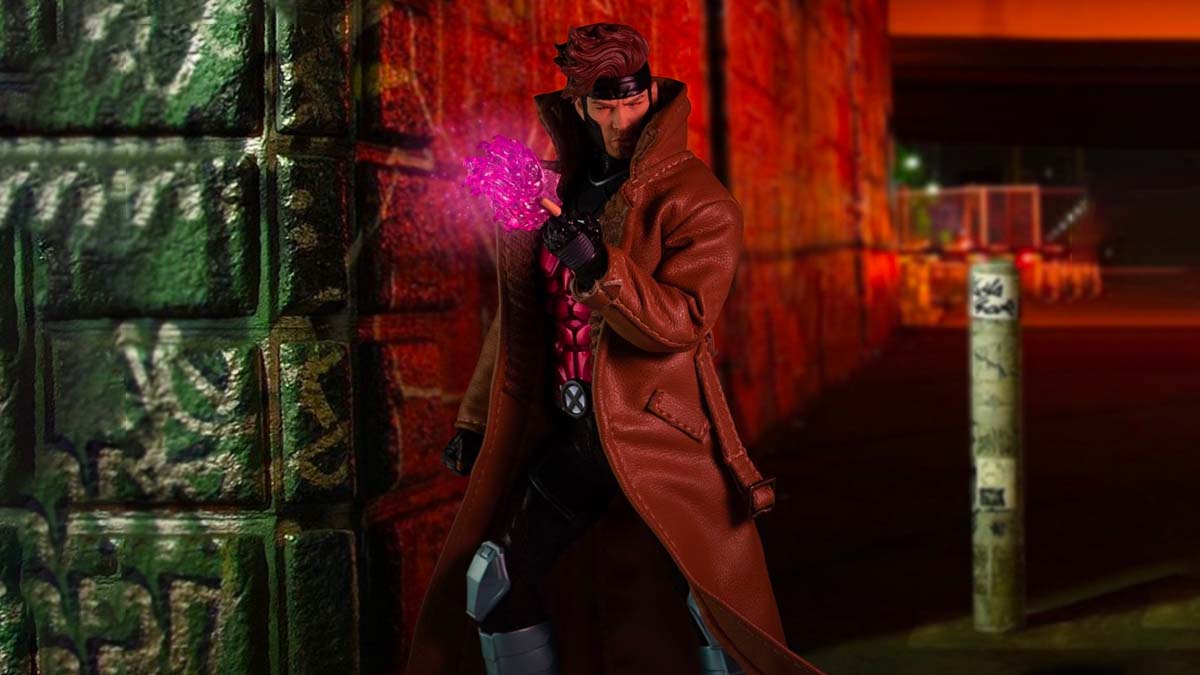 Most importantly Gambit looks and feels just like he should, the face sculpt and paintwork are incredible and have so much character, and alongside the Mezco Brown Suit Wolverine, Cyclops. Cable and Magneto continue to round out my classic 90s team lineup, with another great figure.

For more Mezco review check out my thoughts on Mezco’s Wolverine. 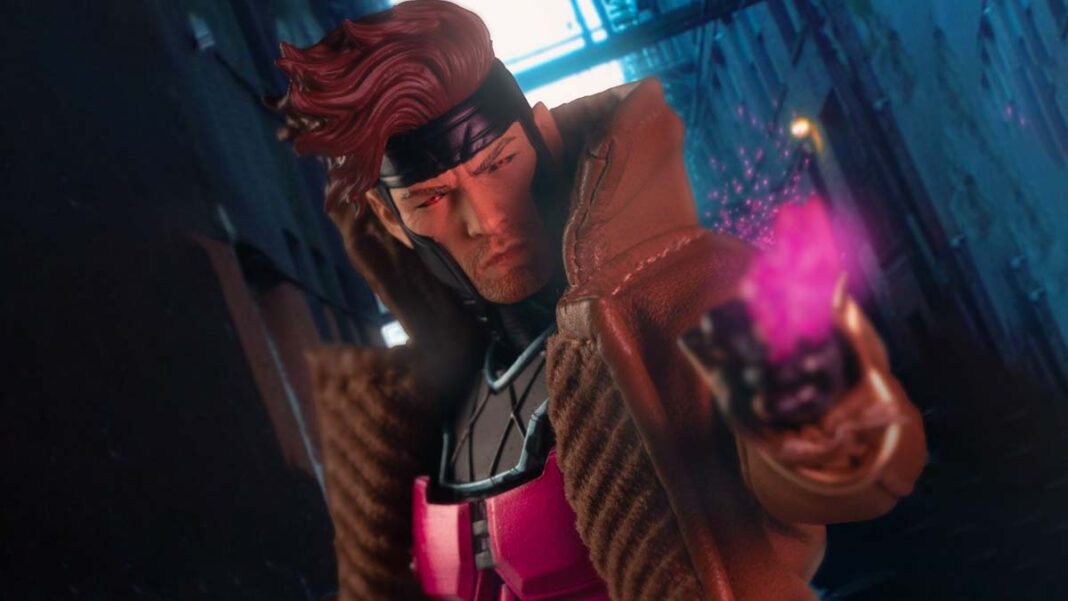 763
May 24, 2021
Previous articleThe MCU and Reinventing The Comic Books
Next articleIron Man: The Evolution of a Hero
© Newspaper WordPress Theme by TagDiv