Marvel’s Avengers undoubtedly delivers some repetitive gameplay but I’d argue that it wraps it in just enough story and interesting (although in some cases overly familiar) characters to deliver a very enjoyable game. Avengers isn’t without its flaws, but it capitalises on the success of the MCU while having enough of its own charm as well as a fresh new take on the idea of running around as your favourite hero and smashing up bad guys that underpinned games like the X-Men Legends and Marvel Ultimate Alliance. 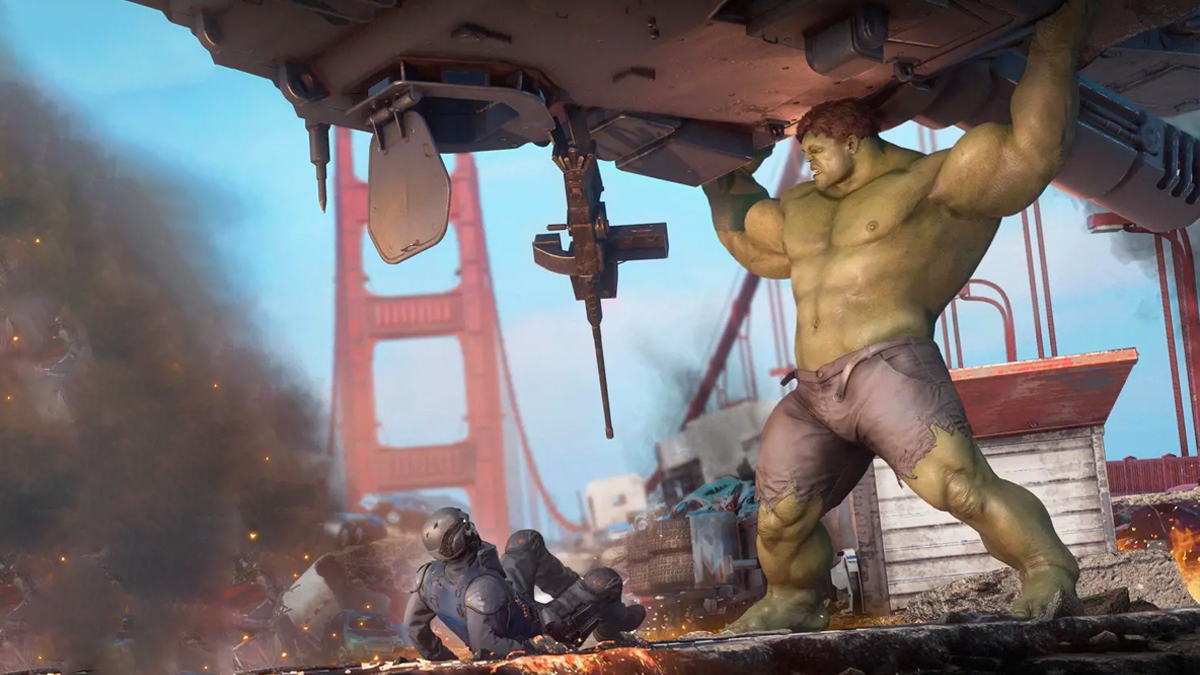 The story slowly introduces other characters and alternates the player between each of the Avengers for different missions. Despite being a relatively loose story that mainly points the player in a direction and says go, there is some surprisingly powerful emotion in the heroes arcs and a great emphasis on their development and backstory. This is seen most in Kamala Khan, whose religion and relationship with her father are key to the narrative.

For more experienced video game fans, the cast of Marvel’s Avengers is an all-star line-up, almost distractingly so. Tony Stark is played by Nolan North, who is most notable as Desmond from Assassin’s Creed, Deadpool, and Nathan Drake in the Uncharted series. Bruce Banner is voiced by Troy Baker, best known as Joel in The Last of Us and its sequel, Black Widow is voiced by Laura Bailey whose roles almost surpass North and Baker, and include starring in Gears of War 4 and 5 as Kait Diaz, Mary Jane in the PS4 exclusive Marvel’s Spider-Man, and Abby in the Last of Us Part II. Travis Willingham voices Thor, as he has in several Marvel projects, Jeff Schine is Captain America, and Sandra Saad stars as Kamala Khan. 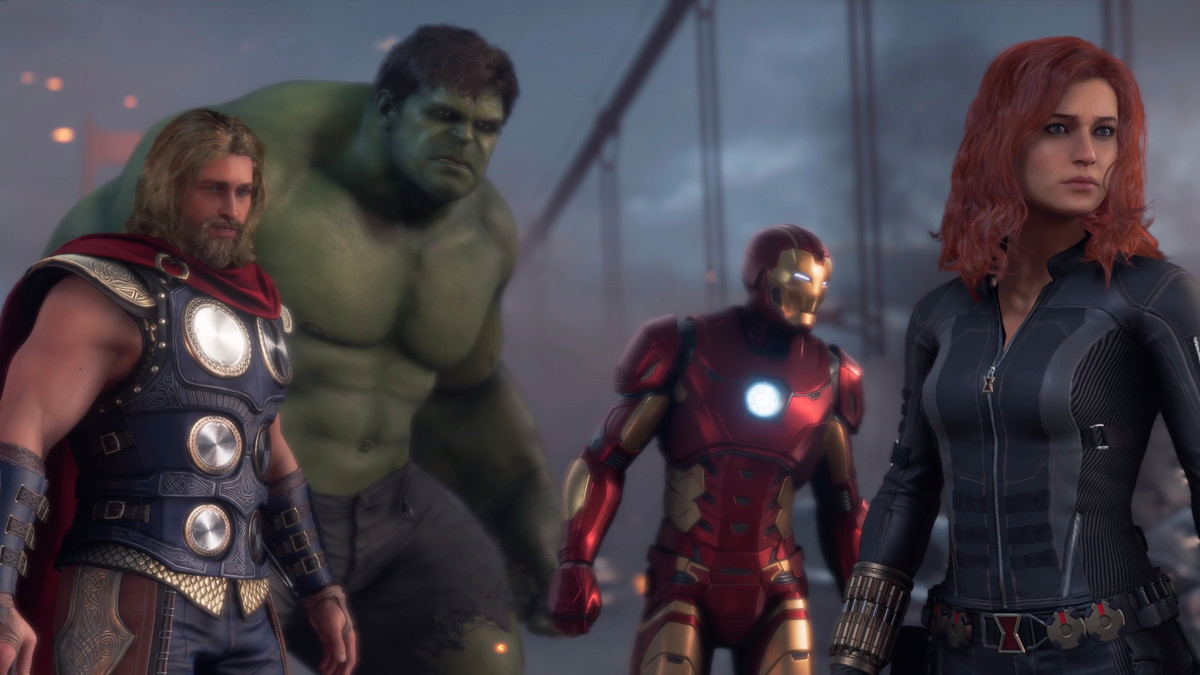 Although the core game revolves around running around, variations of the same kind of combat between each character, smashing boxes and finding loot and better gear, the subtle shifts in each character’s gameplay and the loose story wrapped around countless missions of ‘go here, fight these guys, then smash this thing’ really do add just enough to make the game, it’s story and characters engaging. 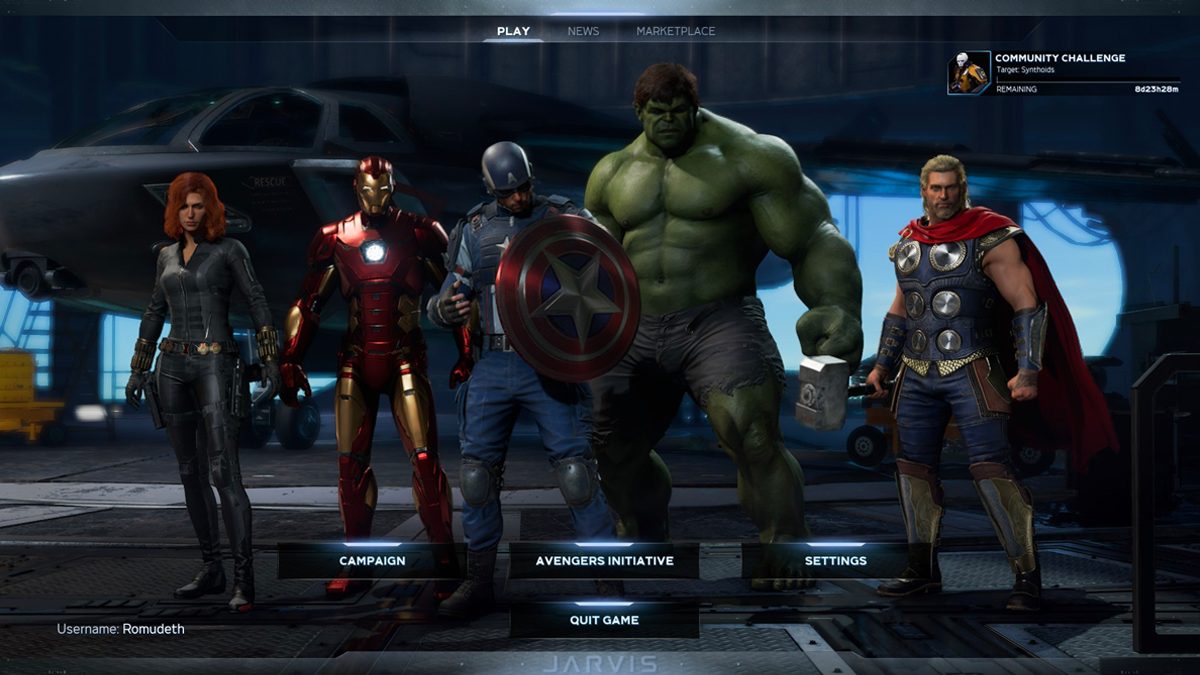 Aside from the main story campaigns, each hero gets a legacy mission set which interweaves with the main story and its villains on a more personal track for each character. As well as that there are random AIM bunkers and labs to destroy and the HARM room training. A more cynical person will see the story as a convoluted introduction to the online quest and gear collecting mechanics, but I’d still argue that the story does enough to make the campaign enjoyable enough in its own right. 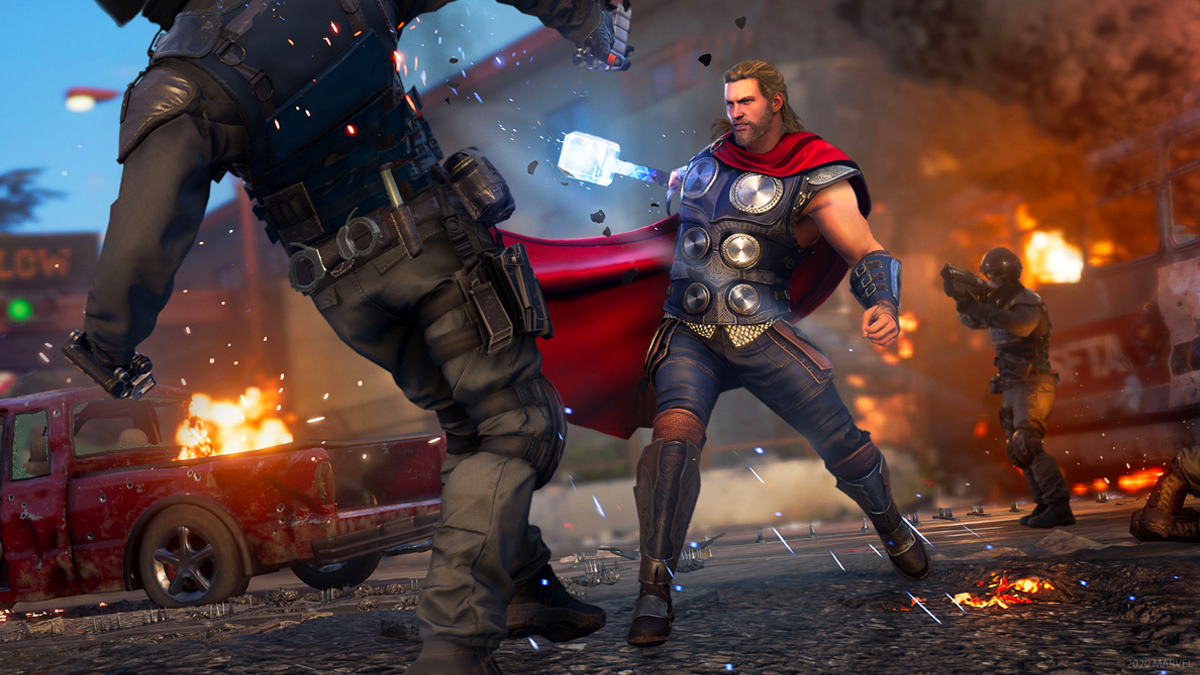 Although it is relatively short, clocking in at around ten to twelve hours (not counting each characters legacy missions and HARM challenges).

As any good superhero games should, Avengers comes with several costume options for characters that lean into both original designs and more traditional ones, there aren’t any exact MCU ones in there yet, but they will surely arrive soon. 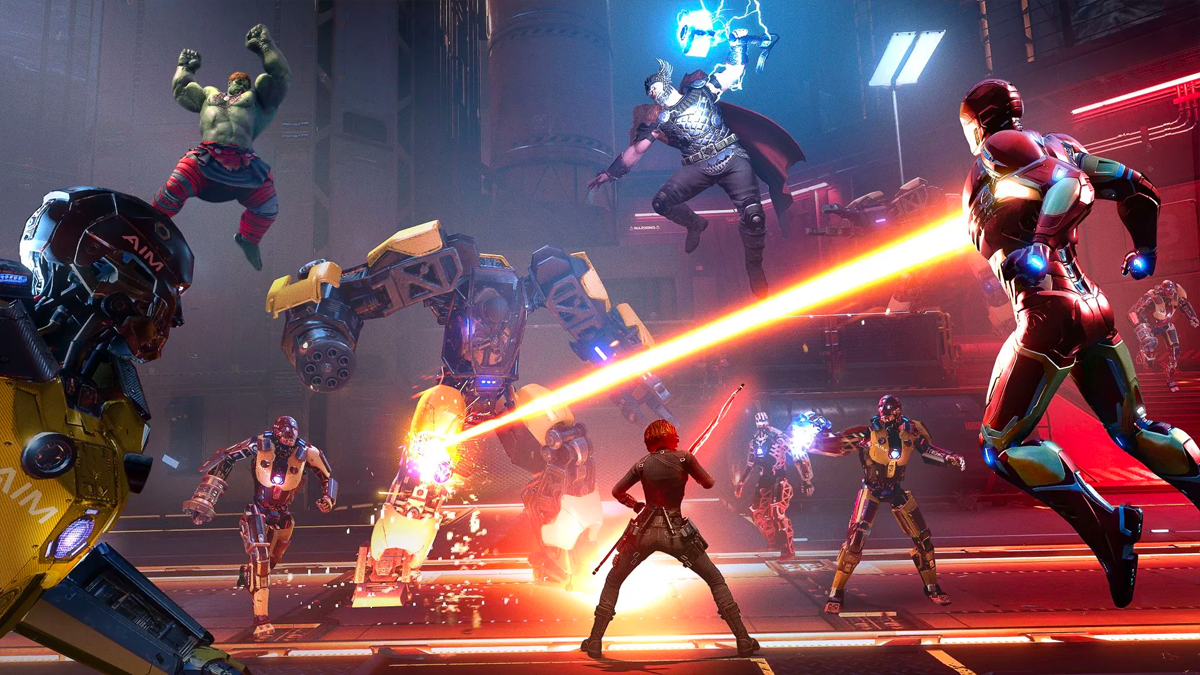 In terms of problems, some cutscenes can be ruined by random pop-ups getting in the way of the camera angle. Random audio issues where characters that aren’t around start talking or say some very out of context lines were present in both the Beta and the final version. The load times aren’t too bad, although some sections where you can die by jumping the wrong way cause a full reload which can be pretty annoying, the counterpoint to that is that once loaded features like completely swapping outfits happen instantly, without needing to reload the game.

But that isn’t what Avengers is, nor is it what it is trying to be, instead, this is the start of a shared world online experience that will continue to add Marvel characters regularly over the coming years and well into the next generation of games. 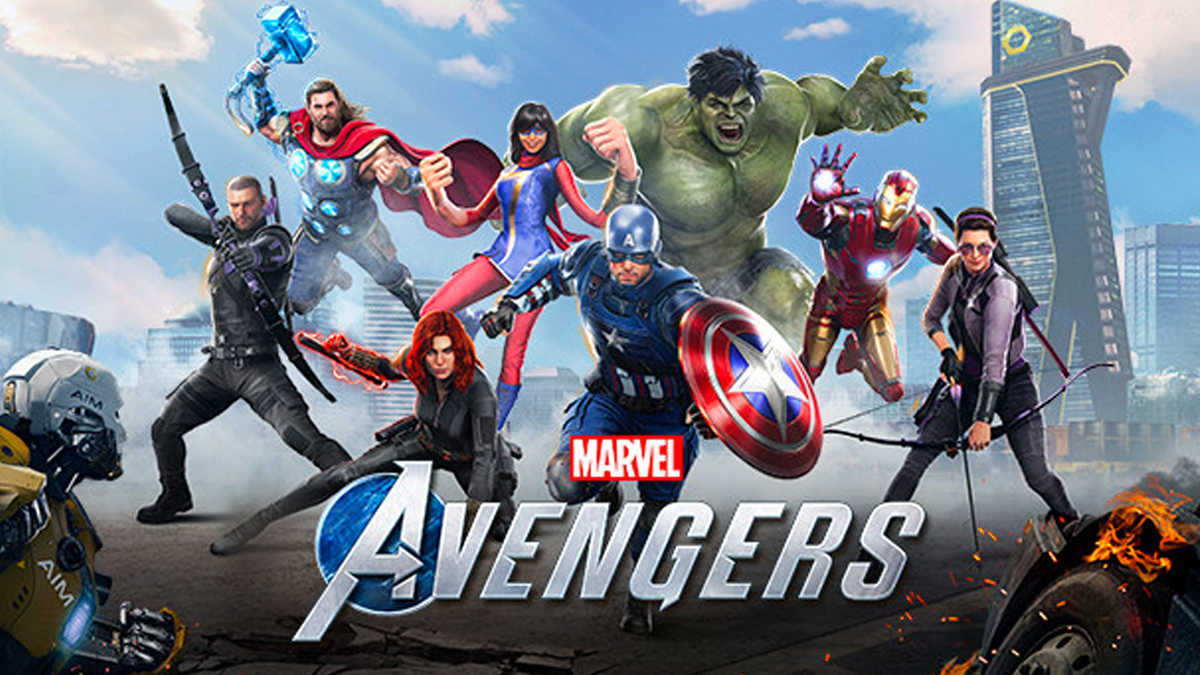 Overall, as a starting point, Marvel’s Avengers delivers repetitive gameplay, sprinkled with enough character and story to keep it fun and engaging, and the beginnings of what could well be the MCU of video games, although it undeniably still has a long way to go, it’s a solid start. 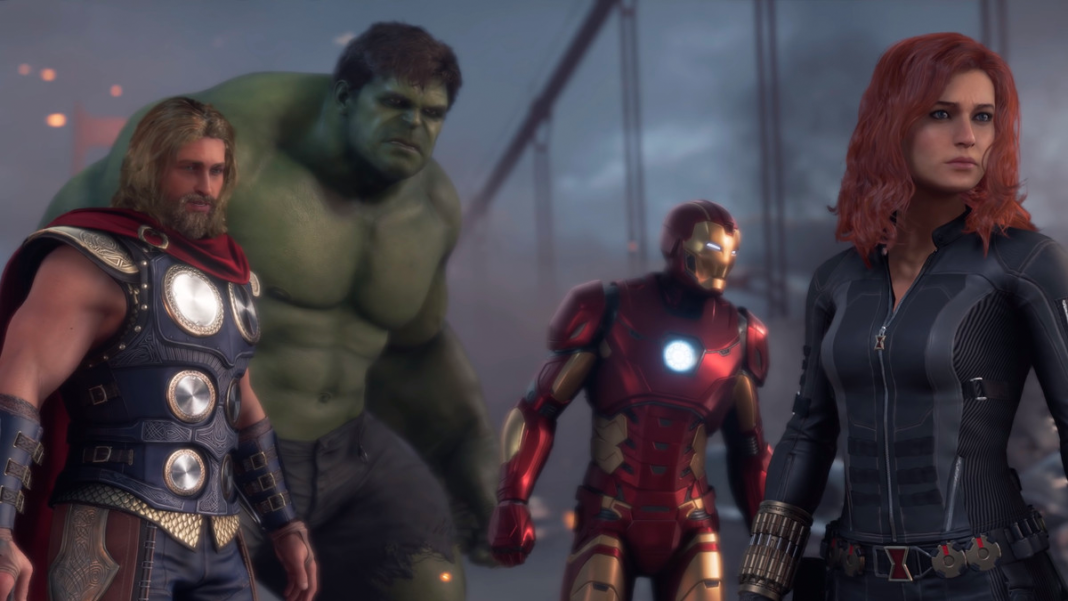 178
September 7, 2020
Previous articleThe Umbrella Academy Season 2 Gets Bigger, Crazier, and more Topical than Ever
Next articleNetflix’s The Old Guard Combines the Old and New (Literally)
© Newspaper WordPress Theme by TagDiv