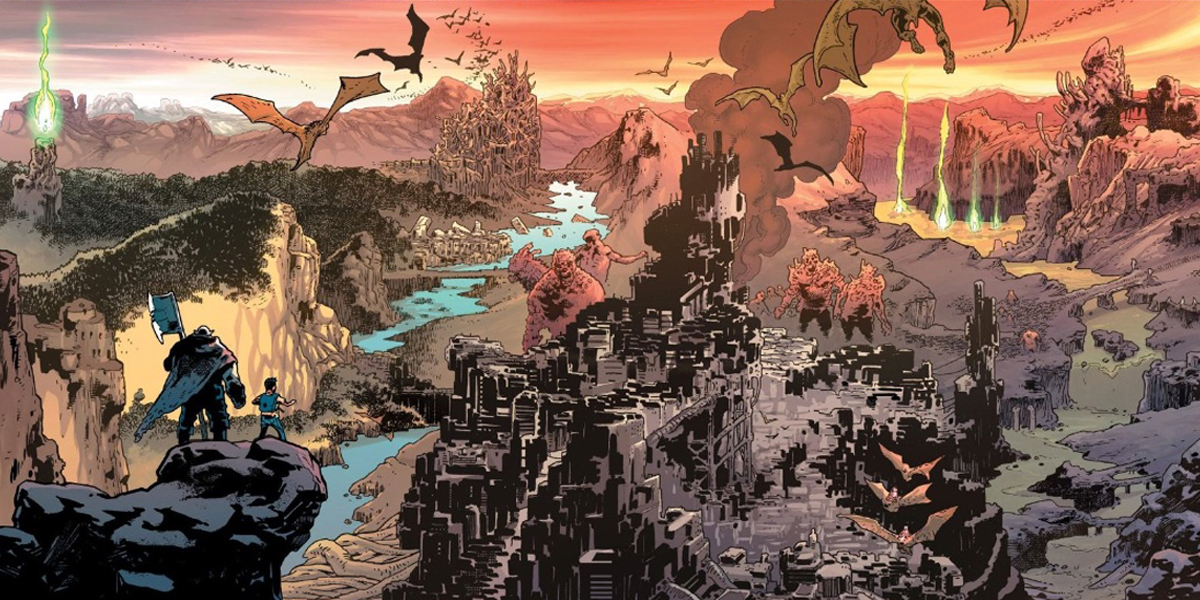 Why Birthright is One of the Best Comics Out There

The concept behind Birthright is one of those intriguingly intricate and yet brilliantly simple, stories, that it hooks the reader in almost straight away. The book starts out with the disappearance of a young boy, who seemingly shows up a year later as a fully grown, weapon clad, Conan the Barbarian look-alike, claiming to of been fighting all kinds of monsters and beasts for decades. If that’s all Birthright was, it would be interesting enough, but when coupled with some even more intriguing mysteries, some great drama, twists, and turns, and some truly incredible artwork, Birthright has managed to standout as one of the most interesting, and enjoyable comic books out there. 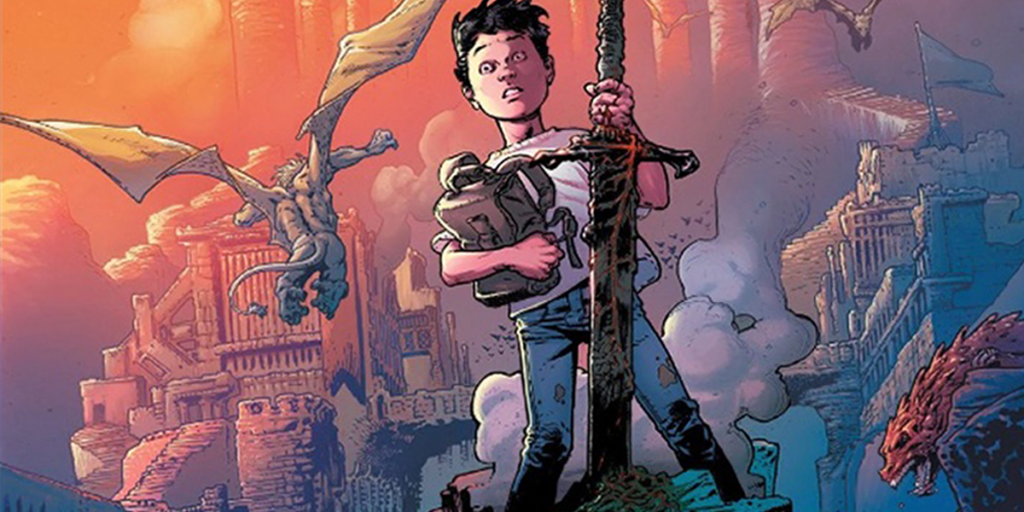 The first Birthright book opens to the very happy, and very regular seeming, Rhodes family. But within the opening few pages all of that comes crumbling down when Mikey, the youngest son, literally disappears during a game of catch with his father (on his birthday no less). The investigation into Mikey’s whereabouts quickly destroys the family, and with no evidence as to what actually happened Mikey’s father Aaron becomes the only suspect.

A year later the mid-divorce parents, Aaron and Wendy, as well as their eldest child Brennan are called into the police station to meet a fully grown man, who came equipped with an arsenal of weapons, and is claiming to be Mikey. Aaron instantly recognises him, and Brennan doesn’t take much convincing, with only Wendy refusing to accept this grown man could be her son.

Mikey explains that in the woods, as he went to retrieve the ball, he was attacked, and taken to another world called Terrenos. Winged people called ‘the Gideons’  (who are just one of the many species on Terrenos) took him to their world in order to fulfil a prophecy, that says Mikey will be the one to defeat ‘God King Lore’ the evil ruler of Terrenos. Mikey then spent years training to finally take on Lore, as doing so was the only way he could get home. 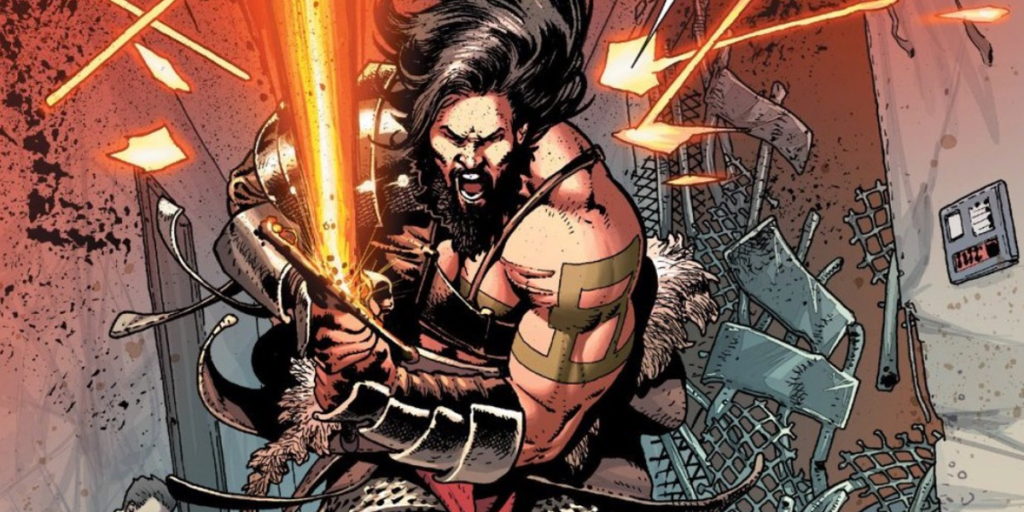 The mystery surrounding ‘Mikey’ becomes that much more intriguing, when it becomes clear he really is Mikey, but that there is a more sinister reason for him coming home, and much more to the both he and his family than meets the eye.

After this solidly intriguing set up (all of which is done in the first issue) one thing Birthright does an excellent job of, basically from that point on, is tell two separate but interwoven stories. As we cut back and forth from Mikey’s life on Terrenos, and his current mission on Earth, the stories intertwine and connect, as we learn more about what Mikey has been up to, the link between Terrenos and Earth, the secrets of the Rhodes family, and Mikey’s true intentions.

On top of this, what really makes Birthright, and its world, so interesting is the themes the books explore. Under the guise of an epic fantasy combined with an intense family drama, the themes of loss, power, corruption, and family are ever-present. So many in-depth themes are explored throughout the series, and whether it’s a look at a young Mikey struggling to deal with his role in the prophecy that has taken him from his family, Aaron’s struggle with guilt and accusations, or Rya’s unending sense of belief in those she loves, and doing what’s right, each book goes from one to the other with ease, highlighting a truly diverse cast of characters and themes. 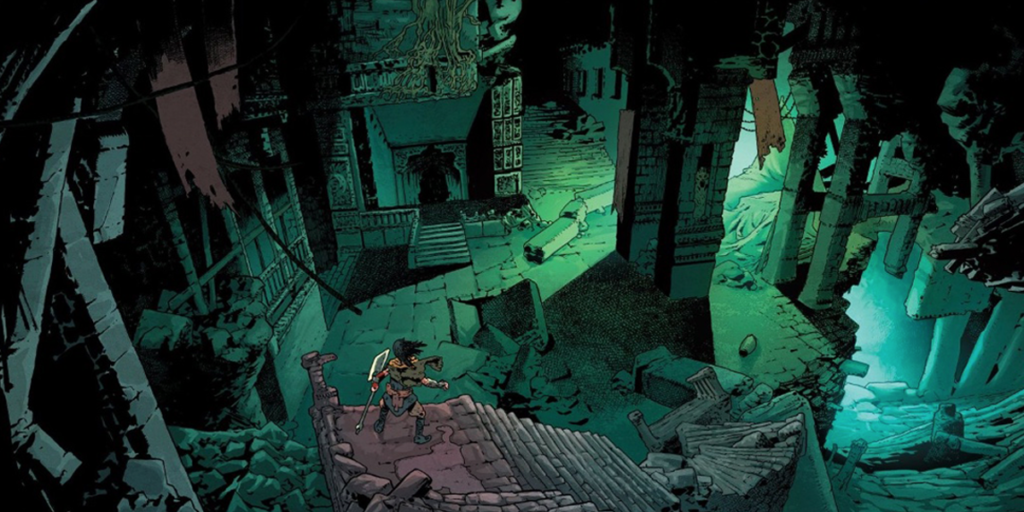 In addition to some solid storytelling, what takes Birthright to the next level is the artwork from co-creator Andrei Bressan, with colours from Adriano Lucas, and lettering by Pat Brosseau. Each book is filled with page after page of incredible battle scenes and landscapes, elaborate splash pages, all of which are packed with copious amounts of details and beautiful colours. And as if out to make comics look easy, the switch from these fantastical and elaborate battle scenes, to more regular ‘people talking in a car’ or ‘sitting at a diner scenes’ is seamless, adding whole new layer, and delivering what could be (in less capable hands) a somewhat choppy story, perfectly. 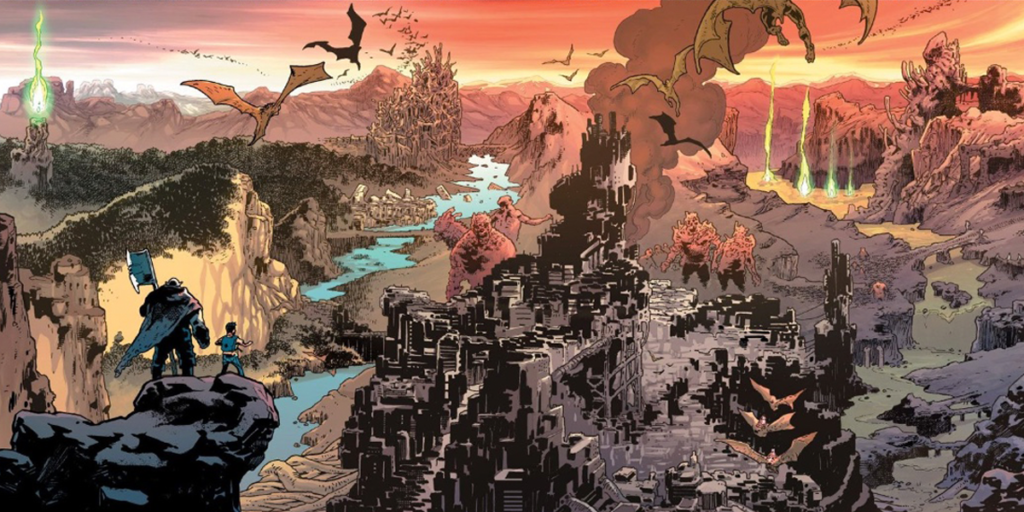 All in all, Birthright adds up to an impeccably crafted book, one that weaves an extremely clever, page turning story from Joshua Williamson with some truly incredible art. Where exactly Birthright will end, is yet to be seen, but there is no doubt that long after the Rhodes’ families story is over there are plenty more stories from Terrenos, and the world of Birthright, that fans would love to see.