With nearly every other show on TV being some sort of crime procedural or murder mystery, it’s remarkably fresh to find a weekly half hour comedy that takes many of the tropes associated with those shows and perfectly blends it with some great chapter development and lots of humour. From creators Dan Goor, who played a large part in the success of the US Office, and created Parks and Rec, Brooklyn Nine-Nine delivers another impressive ensemble cast that is hilariously entertaining no matter how they are teamed up, and whether it’s the great stories the show tells, the characters themselves, or just the hilarious dynamics Brooklyn Nine-Nine delivers there is a lot to love, and a lot of things that add up to make it such a great show. 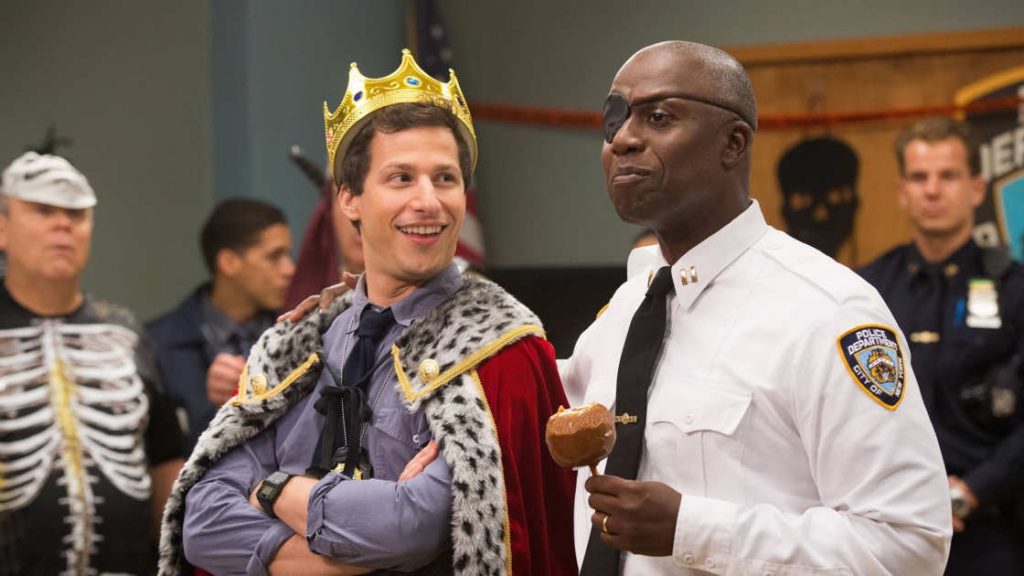 Most crime procedural shows become somewhat repetitive, the formula involves a crime, the team working on finding a suspect or two and eventually working out who did it (with a few somewhat predictable twists and turns along the way). The same can be said of many sit coms, which also have a relatively formulaic nature. The advantage Brooklyn Nine-Nine has is that it combines the two genres and in doing so manages to get rid of that repetitive nature as each episode is in someway or another a combination of a few different styles of TV show.

Of course Brooklyn Nine-Nine isn’t the first comedy show to focus on a group of cops, and it does have a formula of its own; usually Jake being immature, Holt disapproving, Boyle being Boyle,  Amy being a little neurotic and crazy, Gina doing her own thing, Rosa being distant and mysterious, Terry eating yoghurt, and Scully and Hitchcock being all but useless, but these tropes are more often than not combined and intertwined in a unique and original way. The result, more often than not, is that no episode feels like any other, and each (at the very least) feeling wholly entertaining and enjoyable.

Perhaps the most impressive part of the story Brooklyn Nine-Nine tells is the risks it takes, in that it really is a character driven show. After a number of status quo shifts like Holt temporarily no longer being the Nine-Nine’s Captain in Season 3 and the first half of Season 4, which involved Jake and Captain Holt literally living on the other side of the country for a number of episodes, Season 5 started off with Rosa and Jake in prison. This move really showed the show was willing to go out of it’s comfort zone (again unlike many shows) to tell some enjoyable and character driven stories, that progress it’s characters in meaningful ways. 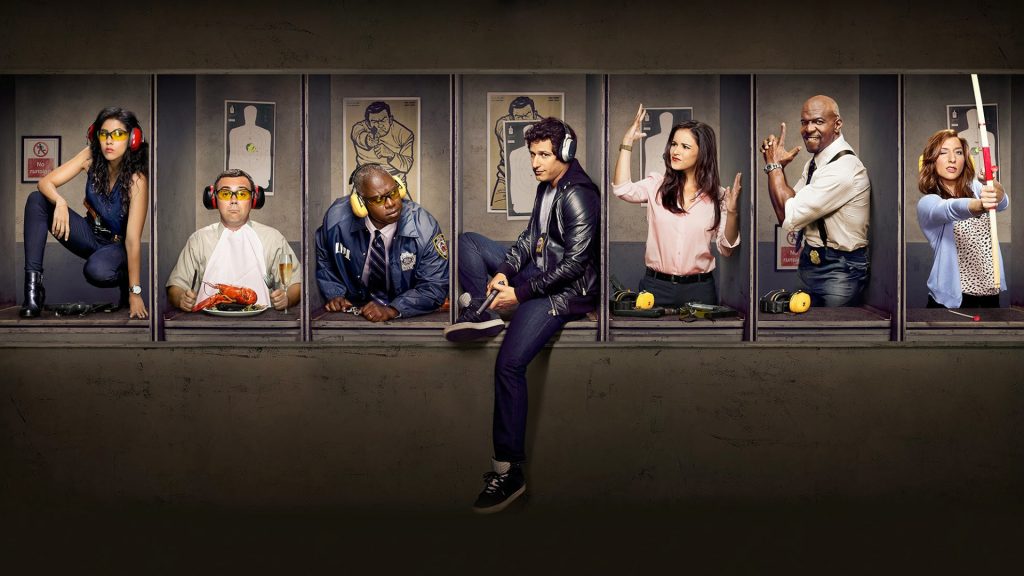 In some episodes the team will be solving a crime, in others it will be all about the internal dynamic and relationships within the squad, but either way Brooklyn Nine-Nine manages to regularly deliver some outstanding TV with every episode.

As with any ensemble cast balance is one of the most important things, and it’s something Brooklyn Nine-Nine manages to do expertly. Regardless of the character combinations each episode manages to get the right mix of humour, emotion and teamwork, with the results as enjoyable and hilarious every time.

All of the characters is perfectly portrayed, Jake Paralta was literally made for Andy Samberg, and manages to both lead the show as it’s hero type whilst simultaneously making constant work mistakes and social faux pas. Andre Braugher’s  Captain Holt is a constant source of humour and one of the best parts of the show, despite being the most serious of of characters his dry and robot (“meep morp”) like personality contrast with Jake’s over the top, die hard obsessed, attention seeking nature in such a perfect way that their relationship has really become the heart of the show. 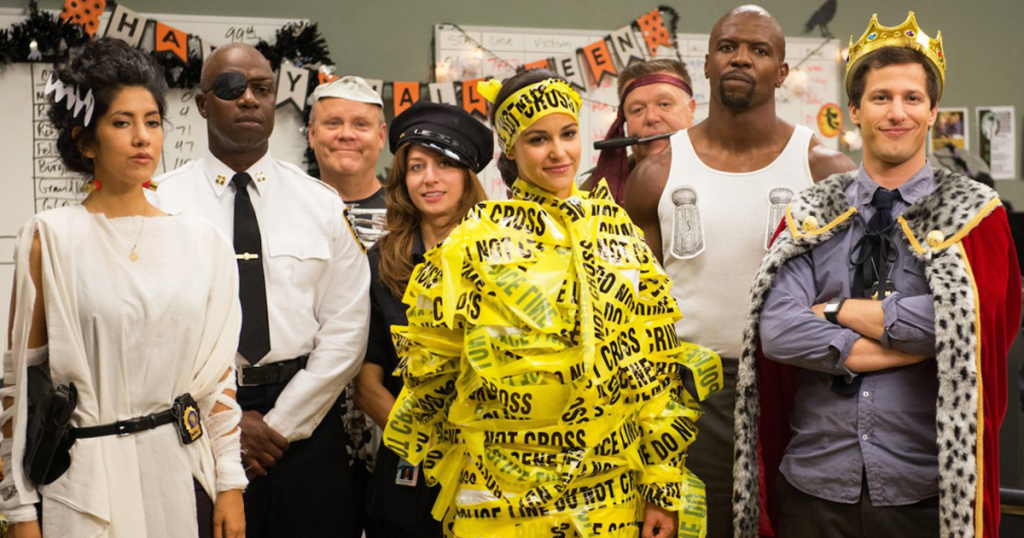 Every character adds to the show in their own unique way, and whether that’s Terry Crews as the over protective family man Sgt. Jeffords, Joe Lo Truglio as the impossibly clumsy Boyle who can’t help but say the most ridiculous things, Melissa Fumero as the obsessive and determined Santiago, Stephanie Beatriz’s bad ass Rosa, or Chelsea Peretti’s Gina who will stop at nothing to ensure she doesn’t actually have to work.

Brooklyn Nine-Nine also shows it’s fearlessness in cultivating one of the most racially diverse casts on tv, that in turn explore a number extremely deep and topical subjects, ranging from racial prejudice and discrimination, sexuality, to adoption. All of these are handled with the shows signature blend of hilarity and character driven content, that manages to drive the point of the deeper arcs home while still making it an extremely fun watch.

Going into the fifth season of Brooklyn Nine-Nine, it’s easy enough to see how it’s managed to do so well in a culture of shows being cancelled almost constantly, as a series it has managed to bring a varied and accomplished cast together to create a truly unique show that combines heart and humour in a great way. Overall Brooklyn Nine-Nine has developed a winning formula, and hopefully will continue to do so for long after the upcoming Season Five. 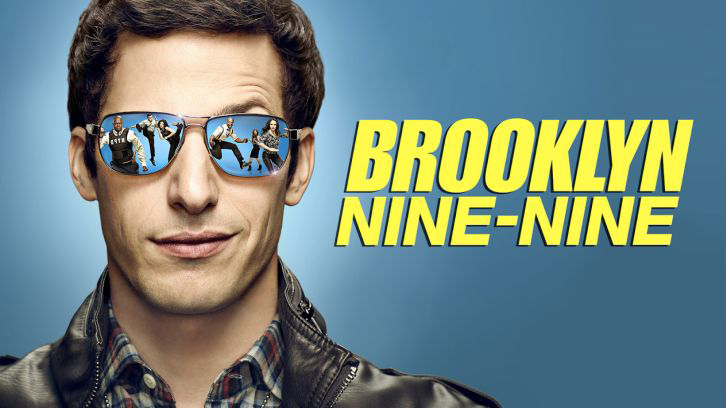 With Brooklyn Nine-Nine now being cancelled it means TV really is loosing one it’s most enjoyable, diverse, risk taking and funny shows, although with a huge wave of online support from fans it looks like a number of channels (other than Fox, who cancelled it) and streaming services look like they may make a move to pick up the show for at least another season, and hopefully (for all our sakes) they do. 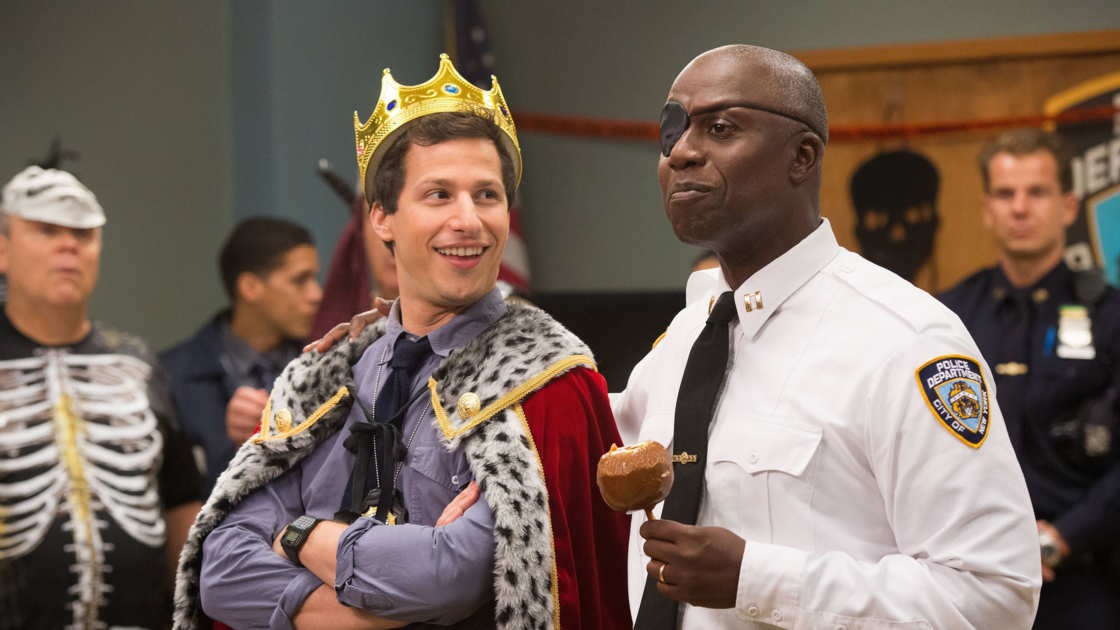 What Makes Brooklyn Nine-Nine So Good?

May 11, 2018
Previous articleArrested Development Season 4: Fateful Consequences Review
Next articleHow The Orville is Much More than a Star Trek Parody