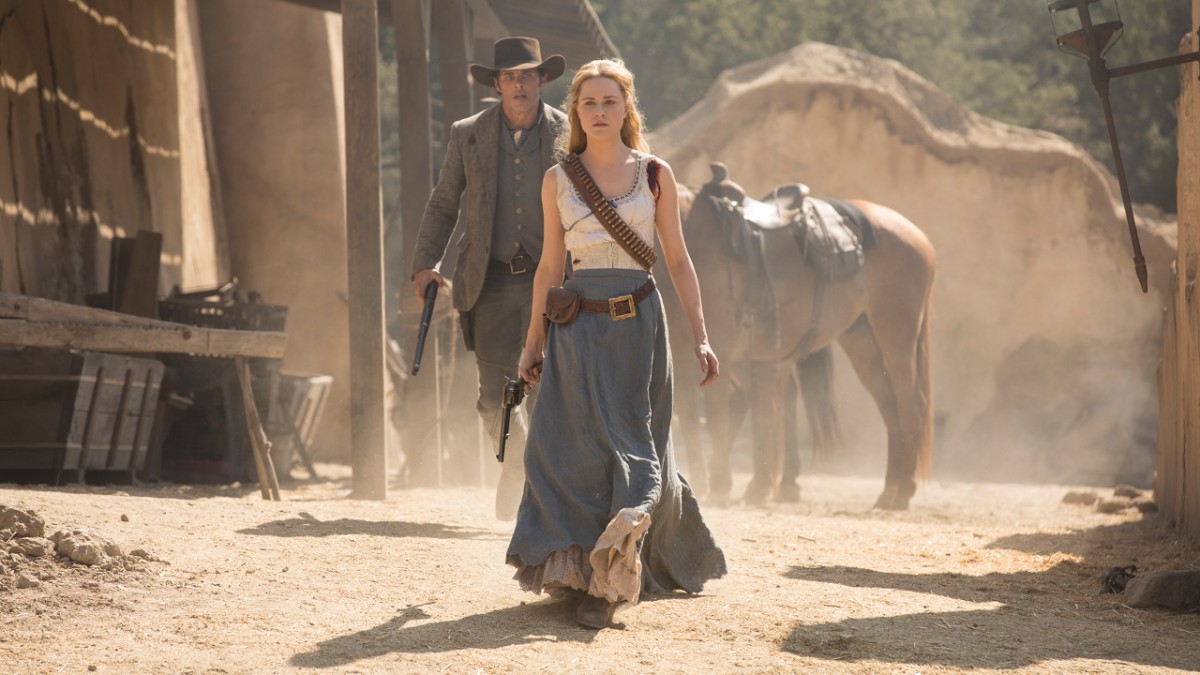 The third episode of Westworld gives us a huge showdown between humans and hosts, introduces us to our first new park (and it isn’t Shogun World), a possible mystery on a ‘man in white’, a new character called ‘Grace’, and some more evidence on the real purpose of the Ghost Nation. 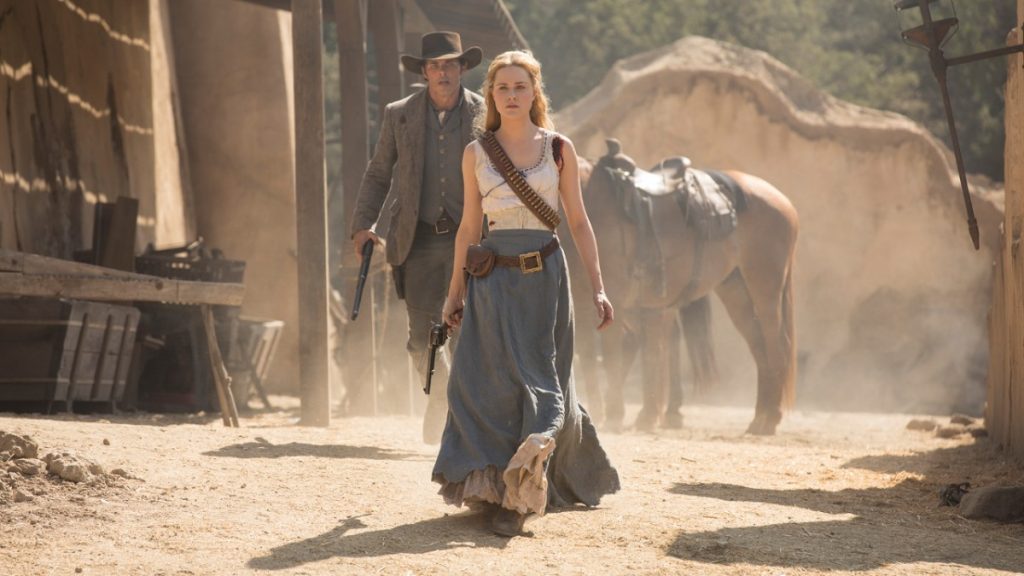 Logan is the ‘Man in White’:

The ‘Man in White’ in question features during the opening sequence of Episode 3, in which we finally see another park; ‘The Raj’. The Raj itself looks to be a 19th century Colonial India themed park, where guests can act as explorers and hunt exotic animals. We meet Katja Herbers’ ‘Grace’ who in turn meets up with Neil Jackson’s ‘Nicholas’. The two spend the night together, after Grace shoots Nicholas to make sure he’s a human.

The next morning the two are attacked by a Host, Nicholas is killed, but Grace manages to escape, only to be pursued by a Tiger, or better put ‘the’ tiger, and the scene goes on to explain how the Tiger gets to Westworld in the first episode of Season 2 (where Stubbs says hosts going form one park to another has never happened before). 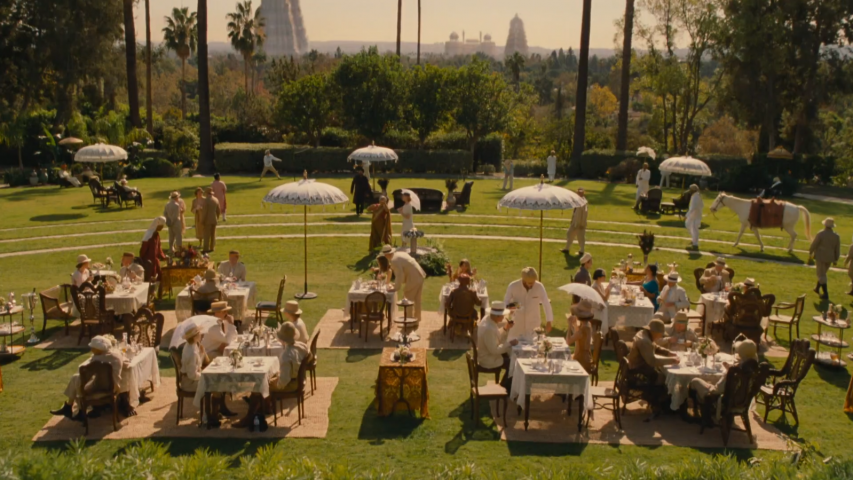 At the beginning of this scene (before the Hosts turn on the guests), during the establishing shots of The Raj we can see a man in a white suit and hat leaning over Grace who herself is sat at a table taking notes. The man is seemingly telling her something, perhaps telling her what to write (we later see in her notes that it is a hand drawn map of some sort). Shortly after, once Nicholas’ see’s Grace, the Man in White leaves.

The idea is that this man (who admittedly could have simply been a host setting up Grace for some sort of narrative) could be a future version of Logan, who we are yet to see out side of flashbacks. And that Logan is now playing some sort of game that outwardly goes against what William is doing (i.e the Man in White vs. the Man in Black).

This would be a great twist, and an awesome way to bring Logan into the most recent set of events that Westworld is showing us, but also deliver a great sense of symmetry. If we look to how William turned from an innocent, naive, sweet, white hat wearing ‘good’ guy at the beginning of the show into the crazed obsessive Man in Black, who even caused (seemingly unintentionally) his own wife to kill herself, and compare that to Logan who started out as this evil, entitled, villainous character (in the park at least). The comparison between the two essentially leads to the idea that they’ve switched roles, with Logan is now being the good guy out to stop William.

This is less of a solid theory, as there is no real evidence for it, with the only real thing we can gleam from the scene being that there may be more to the Man in White and what he was saying to Grace, regardless of who he actually is. 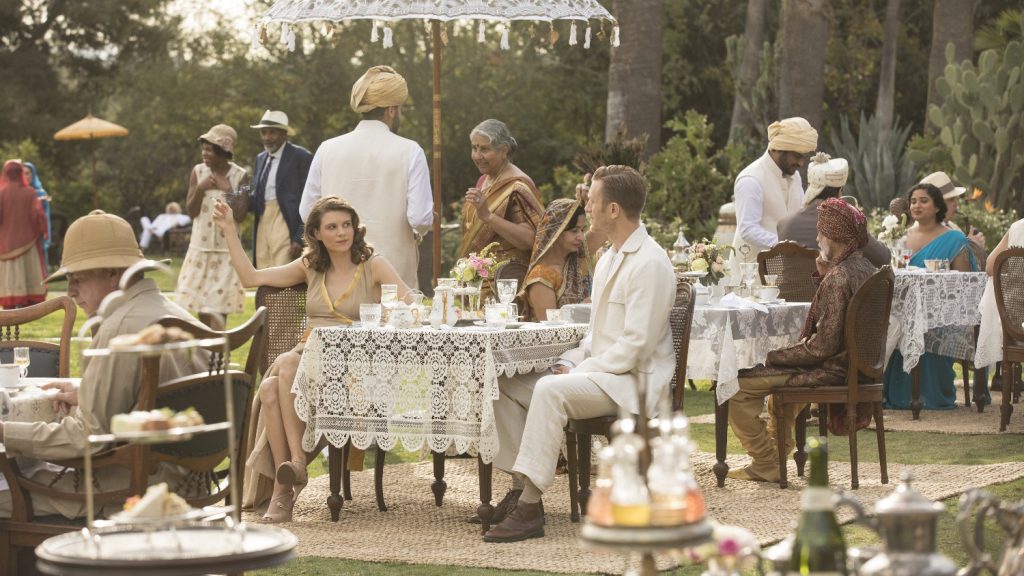 ‘The Raj’ Scene Takes Place During the Season 1 Finale:

Realistically this is less of a theory and more just putting together what we’ve seen, but the idea is that the Raj scene shows us events happening simultaneously to the dinner scene in which Ford was executed in the Season 1 finale.

The dinner scene plays out as the beginning of Ford truly setting Hosts on a path to freedom, and after Dolores executes him a number of Hosts join in on the killing spree, but as we see in Episode 1 of Season 2 (with the stable boy) not all hosts turned on the humans, and some stayed on their loops. This also looks to be the case in ‘The Raj’ where some hosts were playing along with their loop helping guide Grace and Nicholas to the tent in the forrest, but when they get there it seems some humans are already dead (at the hands of the Hosts), and so some have turned whereas others haven’t.

Again there is no concrete evidence for this, and if the reveries update is triggering different hosts in different ways, at different times there is no telling (at least from what we’ve seen) where the scene takes place. With the Bernard beach scene in doubt, the tiger doesn’t even necessarily help us place the scene, but having it at least ‘around’ the time of Ford’s speech makes a lot of sense. 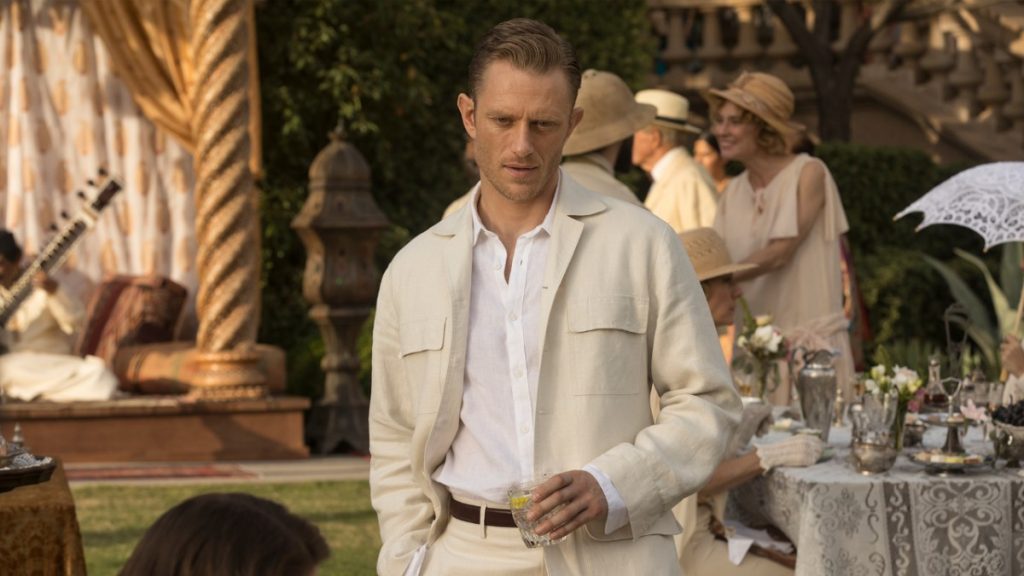 Who ‘Grace’ Really Is:

Ever since Season 1’s mention of the Man in Black’s wife and daughter all kinds of theories as to who they are and when we’ll see them have emerged. Now that we’ve seen William’s wife Juliet in the past, along with a brief glimpse at their daughter Emily (in Episode 2) we know a little more, but who his daughter is in the modern day is still a mystery, with ideas ranging from Charlotte Hale to nearly every other young female character we’ve met along the way.

The latest addition to the ‘she could be William’s daughter’ category is Grace, who we can see is a frequent visitor of the park(s), implying she is very wealthy or has some sort of special access (perhaps given that her father is the controlling member of the board), she knows a lot about the parks inner workings, seems skeptical of Delos and the hosts, and lastly much like the Man in Black seems to have some sort of ulterior motive with her visit to the park. None of it is concrete evidence (as is so often the case with Westworld theories), but it’s looking like a pretty plausibly theory so far.

Personally I was totally convinced when we first saw ‘Grace’ (who it’s worth pointing out, never gets named in the episode) was a younger version of Sidse Babett Knudsen’s Theresa Cullen (the head of QA in Season 1), not only does Grace look remarkably like Theresa but her mannerisms and the way she smokes in particular are all very reminiscent of the character. Of course the Tiger and the Host’s rebelling seem to place Grace’s timeline around the same time as Ford’s death (a little while after an older Theresa is killed), but that isn’t to say that what we’re seeing isn’t exactly what we think, and is perhaps a flashback to a previously covered up incident around the time of Theresa’s youth. 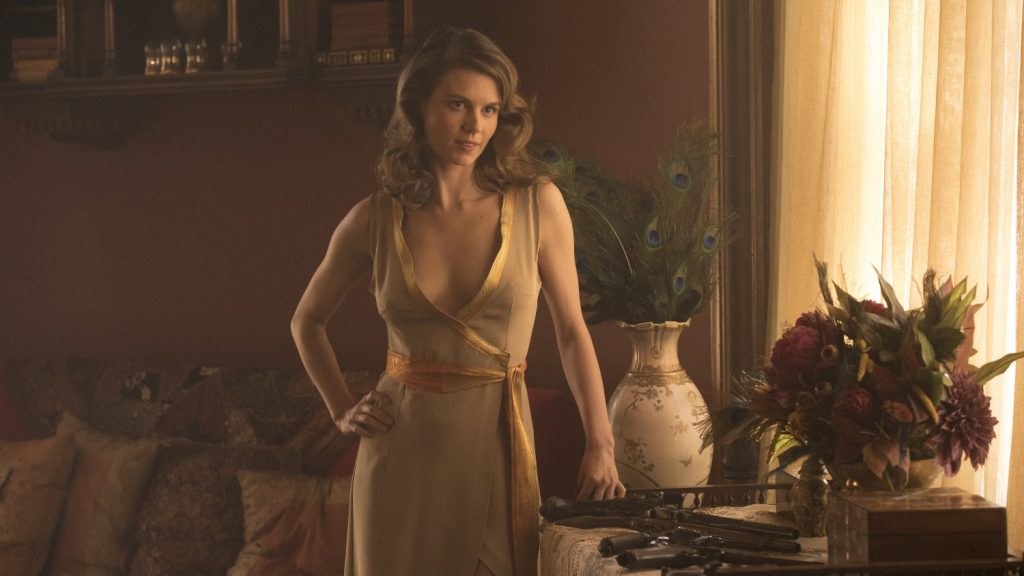 Bernard is in a Loop (on the Beach) [UPDATED]:

We see in Episode 3, Virtù e Fortuna, that Bernard actively hacks into Rebus and alters his personality to allow for much more compassion, this would seemingly explain his change in character and place the events in which Charlotte and Bernard are escaping the Host rampage sometime before the scene where Bernard wakes up on the beach (rather than being evidence of the beach scene being some sort of set up).

Bernard Downloaded the Data from Abernathy into Himself:

With Bernard finally meeting up with Abernathy (even if it was as a prisoner being forced to do some emergency repairs) it meant he got to see what it was Abernathy has in his head (kind of). Although the audience only learns that the file within Abernathy is huge and locked with a complex encryption, Bernard seems to see what it is, and with time running out he faces the decision to ‘use  the one time key’.

From there it seems unclear as to what Bernard does, does he use the key and see the information?  Does he delete the information (super unlikely)? Or did he instead download it to himself? If he did it could explain some of why he started to fail almost immediately after (aside form the technical issues we’ve already seen him dealing with), and why Charlotte and the other Delos employees seem so interested in what he knows in the future.

As an extension of this idea, the reason Charlotte and Strand could be so interested in putting Bernard through a loop in the future (on the beach scene) is that Bernard re-encrypted the data within himself, and it isn’t just the data they need from Bernard, but more specifically they encryption key he’s added to unlock it. 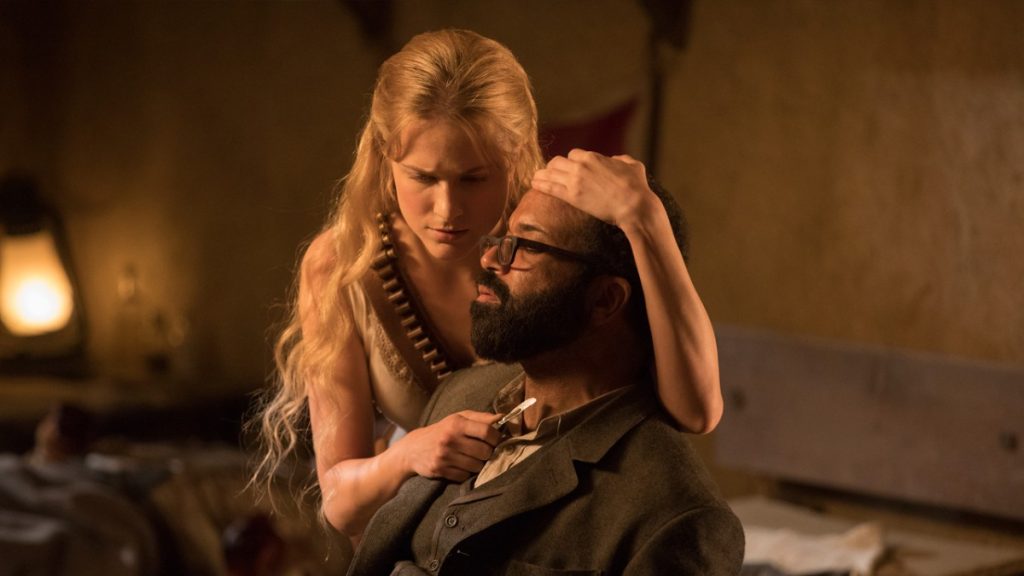 This idea comes out of trying to work out what exactly the Ghost Nation tribe might mean to the bigger story of Westworld. We haven’t really seen much of the Native American host tribe at all so far and all we really know about them is that they seem to have some sort of connection to ‘the maze’ and play a mysterious role in a number of narratives, and so we can’t say for certain when it is they’re role will become clear, if at all.

One thing that does seem clear however is that they look to be against directly harming humans. We saw them ominously tackle Stubbs to the ground at the end of season 1, only for him to reappear totally fine in season 2’s opening episode (assuming of course that version of Stubbs isn’t some sort of host copy or hologram), and then in Virtù e Fortuna we see them show up as ‘Grace’ lands in Westworld as well as seeming pretty interested in Lee, whilst not too bothered with Hector or Maeve (perhaps even wanting to take him away from them).

This apparent interest in humans could be seen as some sort of base programming to protect the human guests from out of control hosts or even just life threatening situations.The ghost nation would act as the perfect under cover security service for humans in the park as they are a pretty mysterious set of characters that rarely interact with guests or the main hosts. 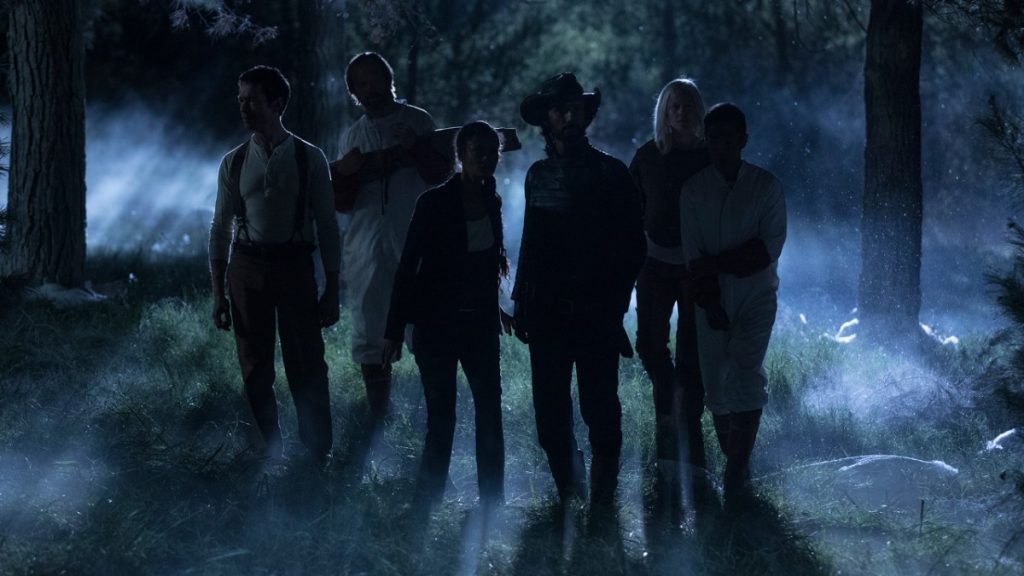