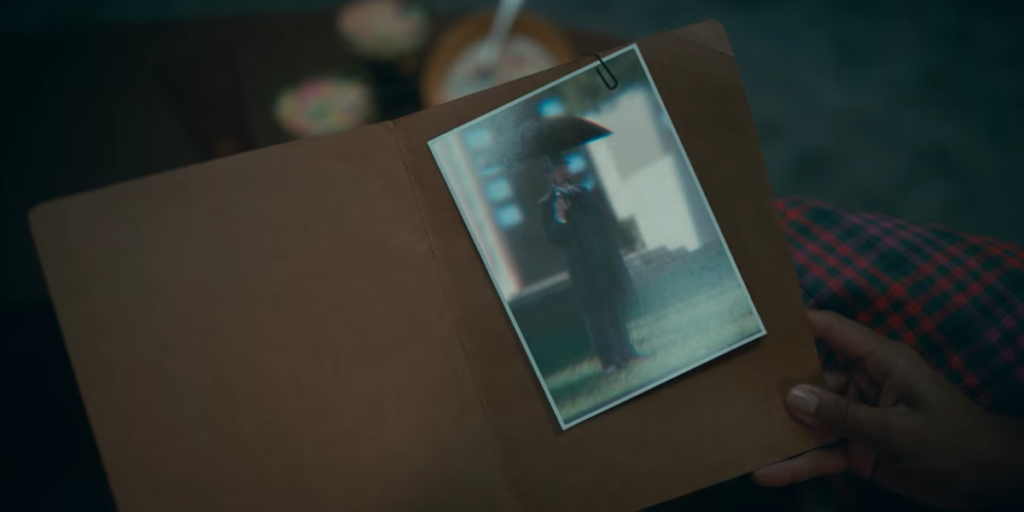 The second season of the Umbrella Academy revolves around the members of the team being dropped off in the early ’60s at separate points, but always in the same location. As most of them arrive, except for Luther and Diego, a different classic monster movie is visible as playing at a nearby movie theatre. For Klaus and Ben, who arrive in 1960, it is Curse of the Undead. For Allison, who shows up in 1961, it is The Curse of the Werewolf. Vanya and Number Five arrive in 1963, where the movie is Kiss of the Vampire. 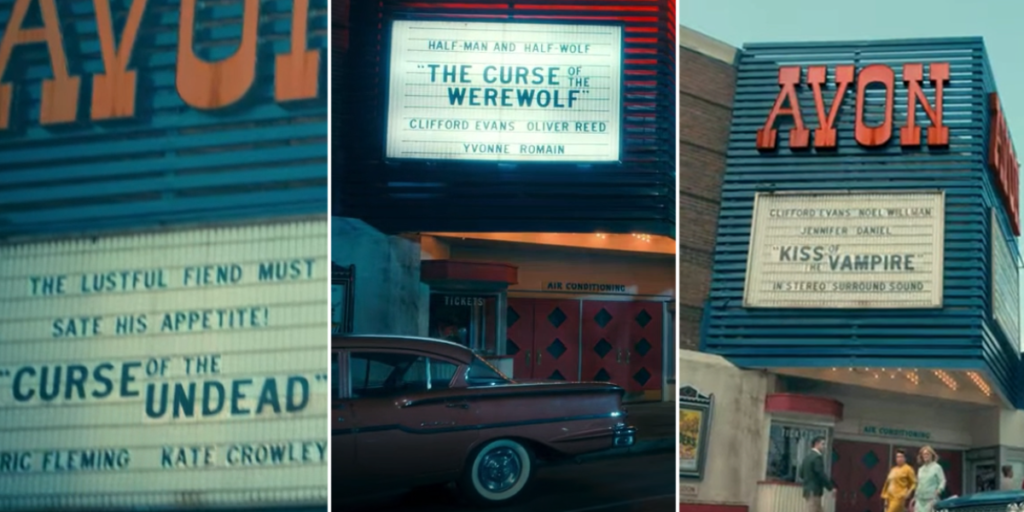 Admittedly AJ’s role is more involved than a simple cameo or reference, but he will be a welcome addition to the show for comic book fans. In the comics, AJ Carmichael was Number 5’s Handler while he worked for the Temps Aeternalis (the comic book version of the Commission). There he plays a similar, albeit (slightly) less villainous role, than the Handler in the show. 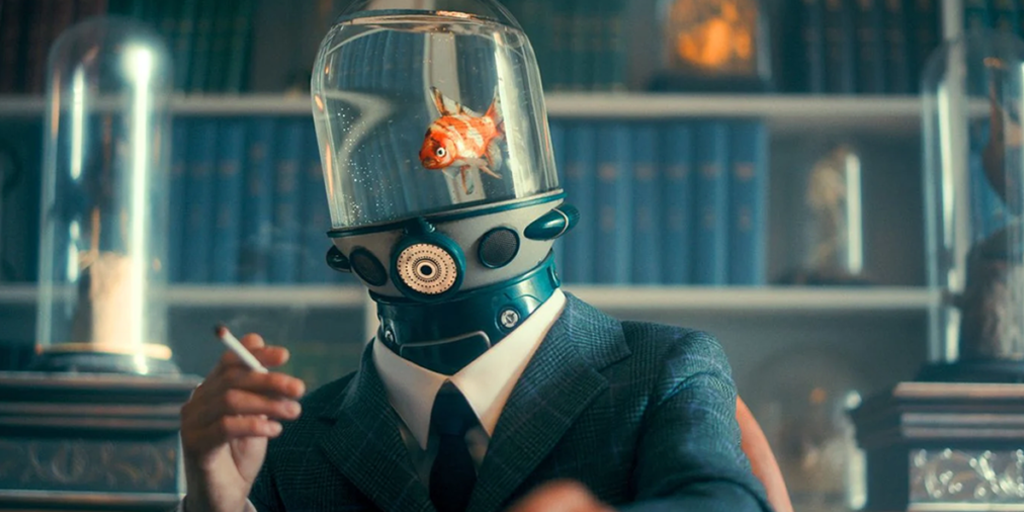 In what may be the most Klaus storyline ever, he decided to start a Cult after getting stranded in the 60s. But never one to work too hard, he used song lyrics for his proverbs and inspirational quotes.

The first line we hear him quote is “Don’t go chasing waterfalls. Stick to the rivers and the lakes that you’re used to” from TLC’s Waterfalls. Next, he says “As long as I know how to love, I know I’ll stay alive” from Gloria Gaynor’s I Will Survive. His last song quote is “Oh, my God, we’re back again, brothers, sisters, everybody sing. We’re gonna bring you the flavour. We’re gonna show you how” from Everybody by the Backstreet Boys (which plays right after his quote). The icing on the cake is the name of the cult: Destiny’s Children. 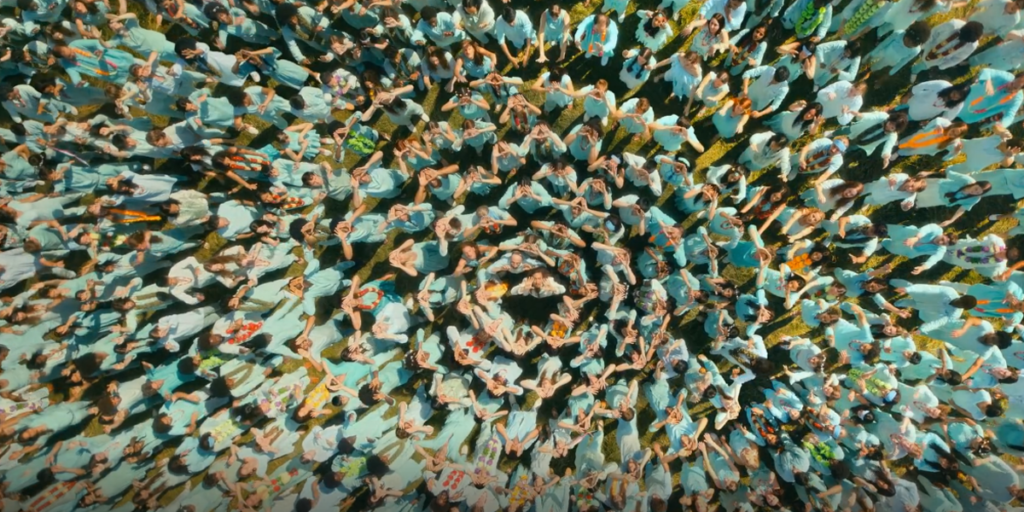 Part of Klaus’ ruse to build his cult and frame himself as a profit shows him having the ghost Ben lift him to make it look as though he is flying. This is a nod to the comics where flying is one of his abilities. 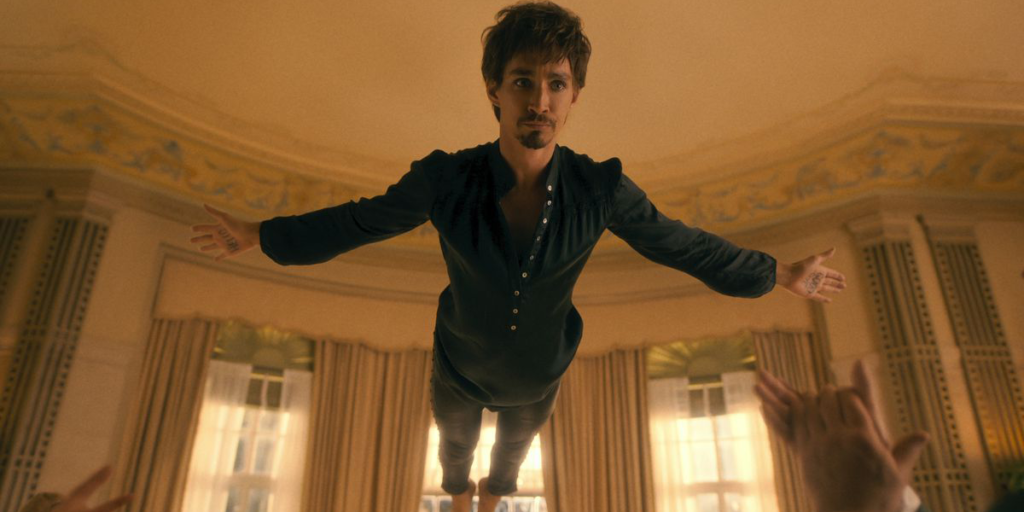 When Luther is running in his all grey tracksuit, the show makes a nod to Rocky, complete with the encouraging kids running alongside (until he trips and they mock him). 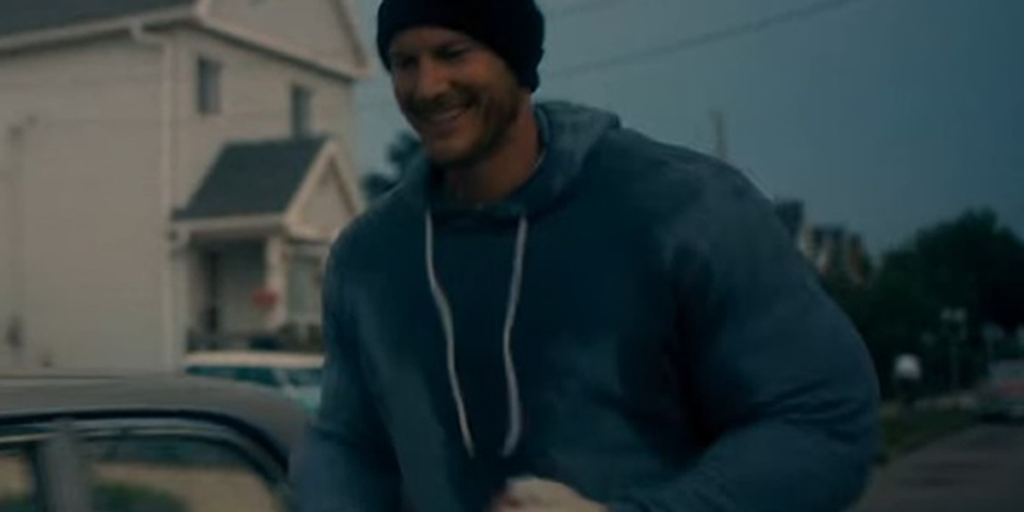 When describing Diego, Number 5 says “imagine batman then aim lower”, which is a harsh but decent description of Number 2 (although some hint of him having the ability to control knives and bullets in mid-air might be worth mentioning as well). 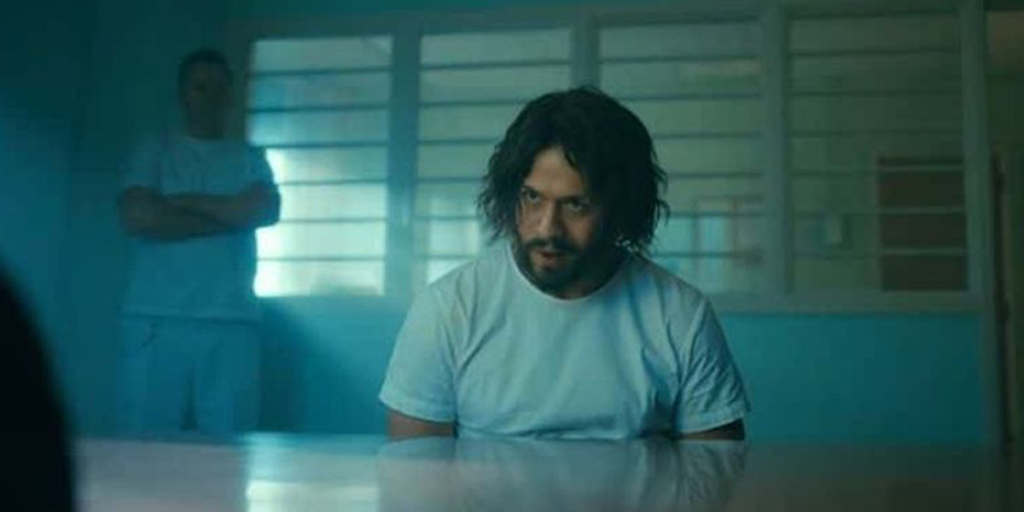 At one point a man is seen wearing a sign saying “the end is nigh”, which is a likely a reference to Watchmen, one of the most famous comics of all time, which Umbrella Academy creator Gerard Way cites as a significant influence. 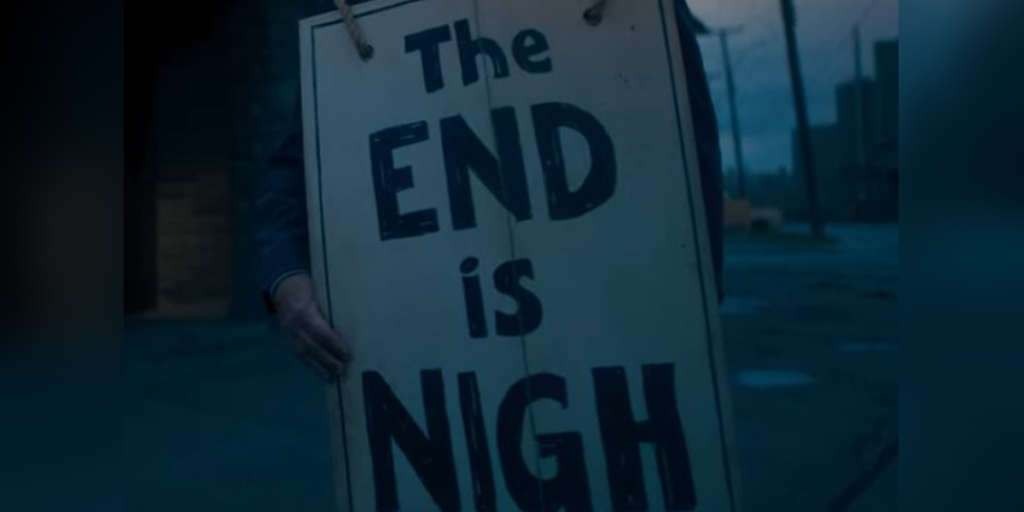 During the Academy’s investigation into their father’s role in the JFK assassination, they discover that he is a part of ‘The Majestic 12′. In real life, the Majestic 12 is rumoured to be a secret organisation established by U.S President Harry S. Truman to investigate aliens and UFOs. This is even further hinted at with the group implying they know something about Hargreaves’ origins and his interest in the moon (which could also indicate that he had a reason for sending Spaceboy to the moon, contrasting with what was implied in Season 1). 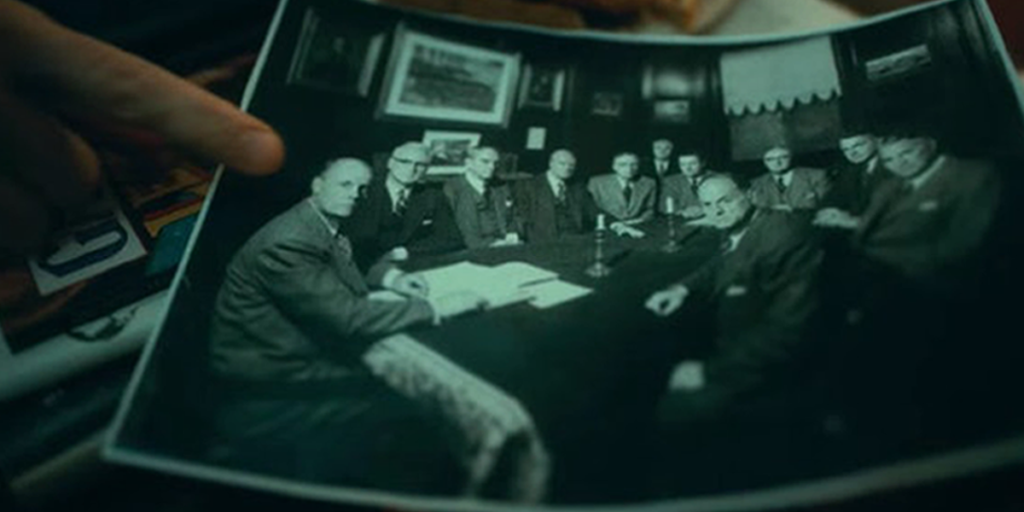 Shown very briefly in the opening pages of the comics, and further hinted at with some flashbacks to his origins in Season 1, Season 2 fully confirms Reginald Hargreaves to be an alien. The scene shows him remove his face mask and murder the other Magnificent 12 members. Additional hints include him arriving in America decades before the Umbrella Academy, but only looking slightly younger, and him on some kind of alien planet.

When the human Grace discovers Hargreaves’ secret room with plans seemingly detailing the JFK assassination, along with a picture of Fidel Castro, on the wall is some blueprints for the Televator. The Televator is a large part of the Umbrella Academy comics and is essentially an elevator that transports people from one place to another. 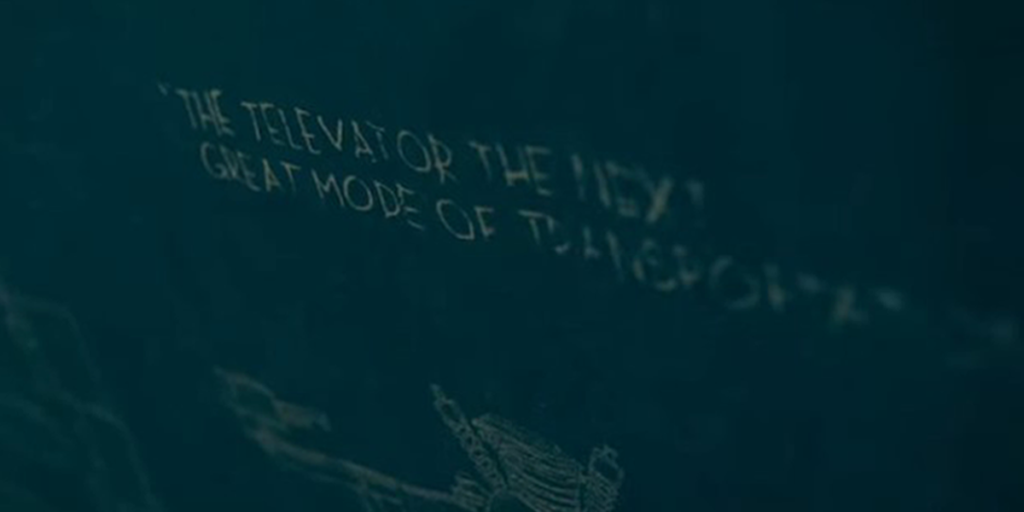 In the comics, when Luther, Diego and Klaus are stranded in the 60s, Luther gains a lot of weight (putting it lightly). In the show, Tom Hopper’s Luther doesn’t gain the weight of his comic book counterpart, but he is seen eating copious amounts regularly. It also gets a nod when he gets into the back of Vanya’s car, sinking the suspension, to which he tells no one to make a fat comment. 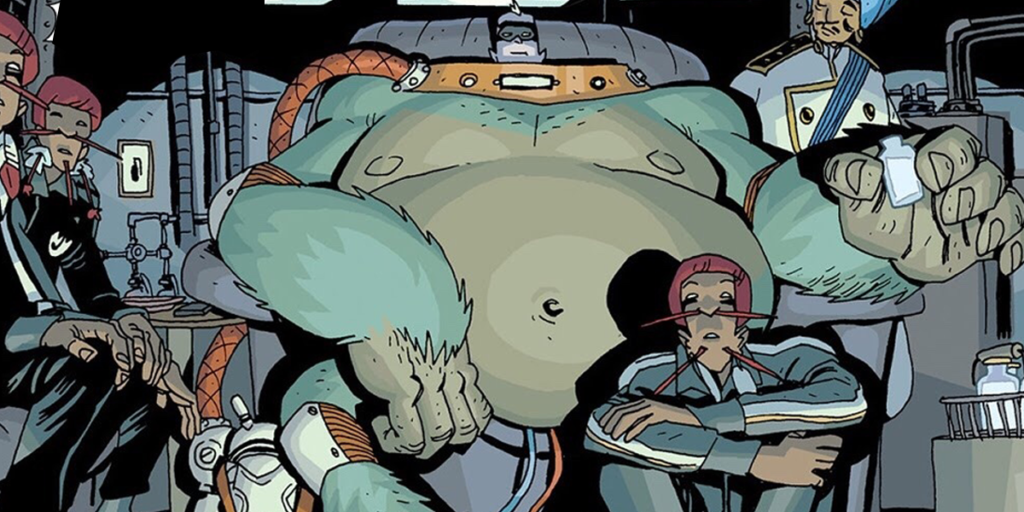 In the second episode the titular Frankel footage is revealed to be a home video of the Kennedy assassination, but one that shows Reginald Hargreaves to be stood on the grassy knoll with a black umbrella. The footage, at least for the show’s purposes, replaces the real-world Zapruder Film which was recorded by tourist Abraham Zapruder and is known as the most complete account of the JFK assassination. In the real footage, there is a man with a black umbrella who for years many believed to be part of a conspiracy and was perhaps a signalman for the assassination. 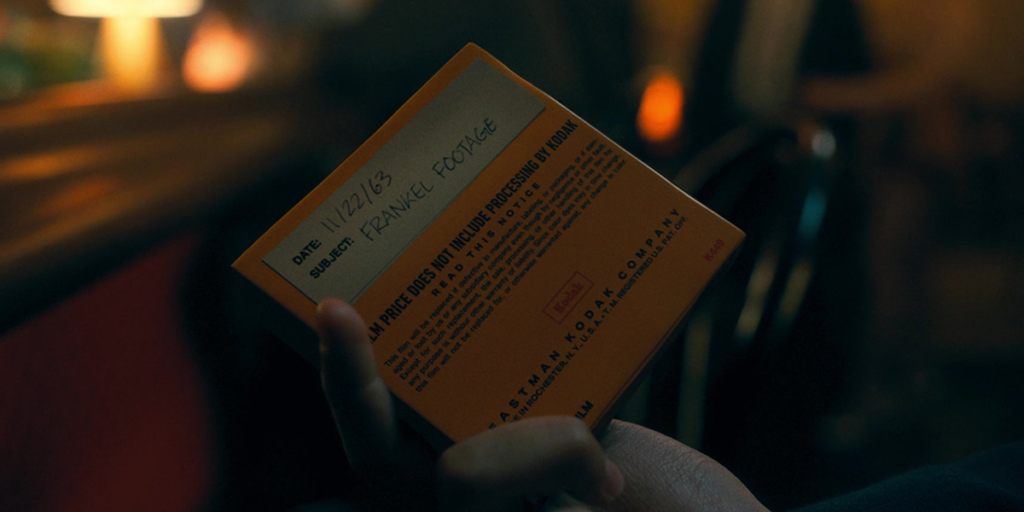 Luther is working as a bodyguard and amateur boxer for Jack Ruby. In real life, Ruby was the man who shot Lee Harvey Oswald. He owned a nightclub in Dallas and was suspected of having ties to organised crime. In the show, Ruby is played by John Kapelos. 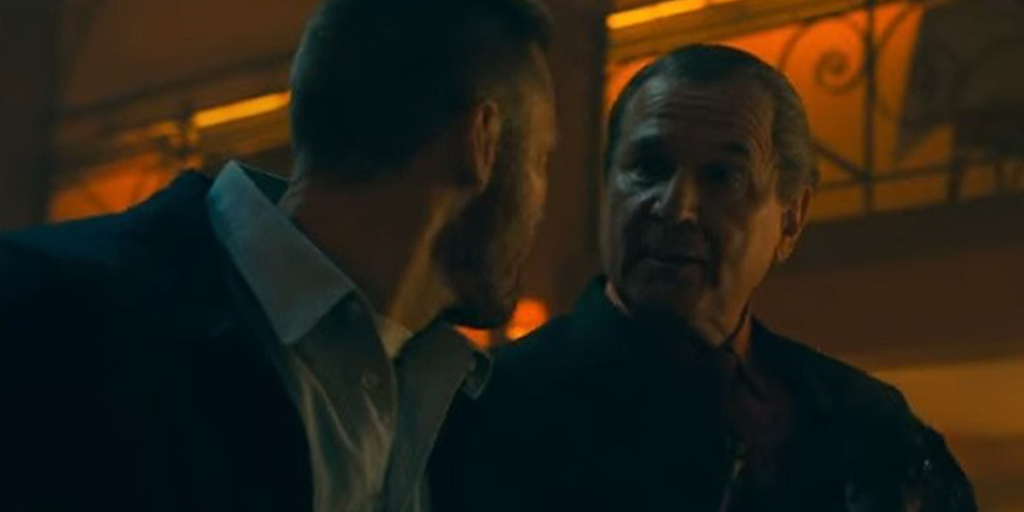 Although she doesn’t appear herself, Number Five’s long term girlfriend and mannequin, Dolores gets a nod when Klaus mentions how bad the whole family is at relationships; “Face it. The only healthy relationship in this family is when Five was banging that mannequin”. 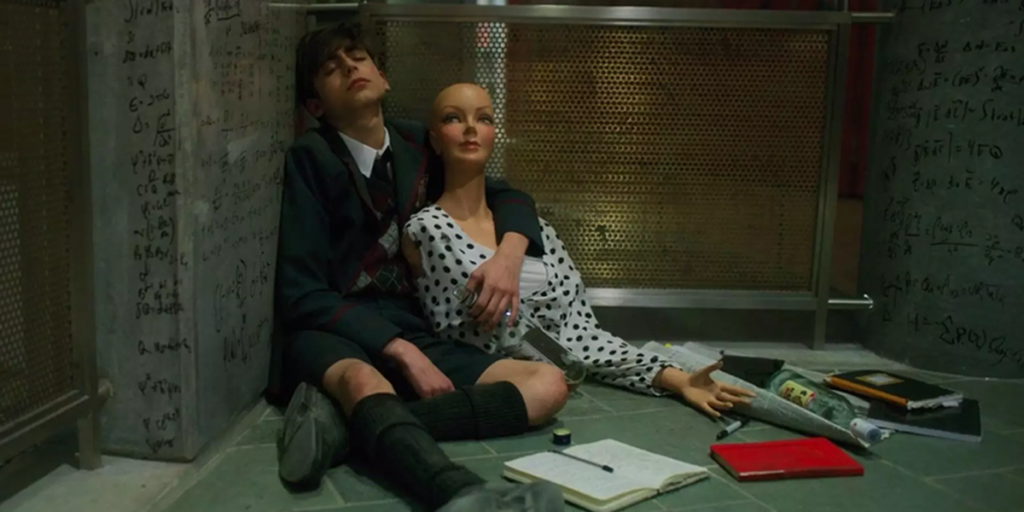 A candy bar in the vending machine in 1982, where Number 5 assassinates the Commission’s board of directors, is called Pogo-Gogos, a small nod to the talking chimp. 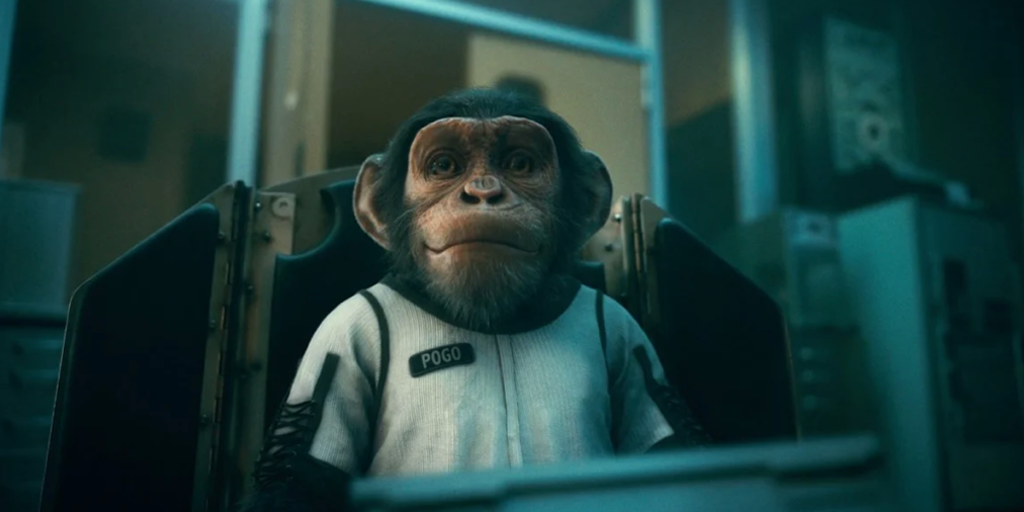 In the seventh episode, Öga for Öga, Number Five mentions a “giant sea serpent”. There is a reference to the team taking on a sea serpent in the short story, … But the Past Ain’t’ Through With You. In that short “a toymaker ticked off a sea serpent by producing a plush doll in its image”. 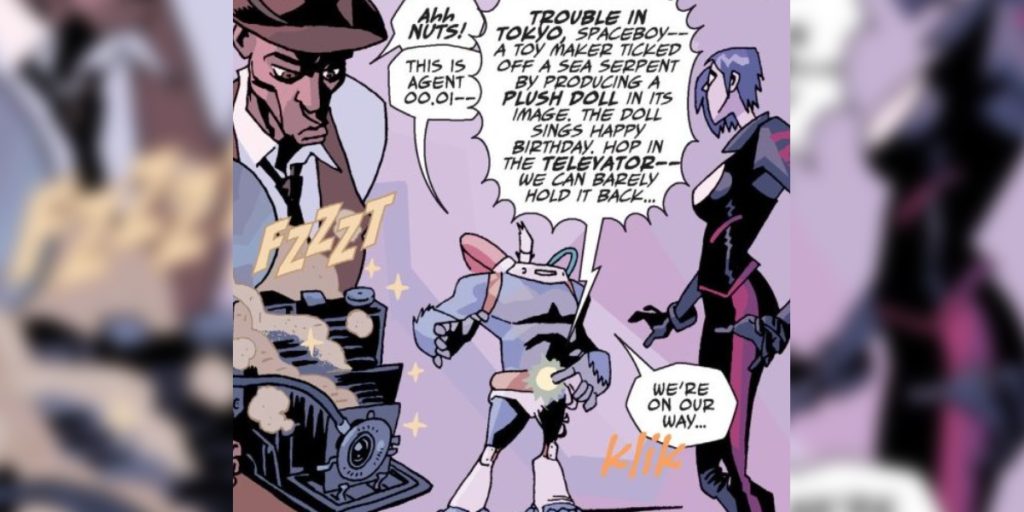 Although who kills him is different, AJ Carmichael is killed by being eaten alive. In the comics, Number Five does it, whereas in the show it is the handler. 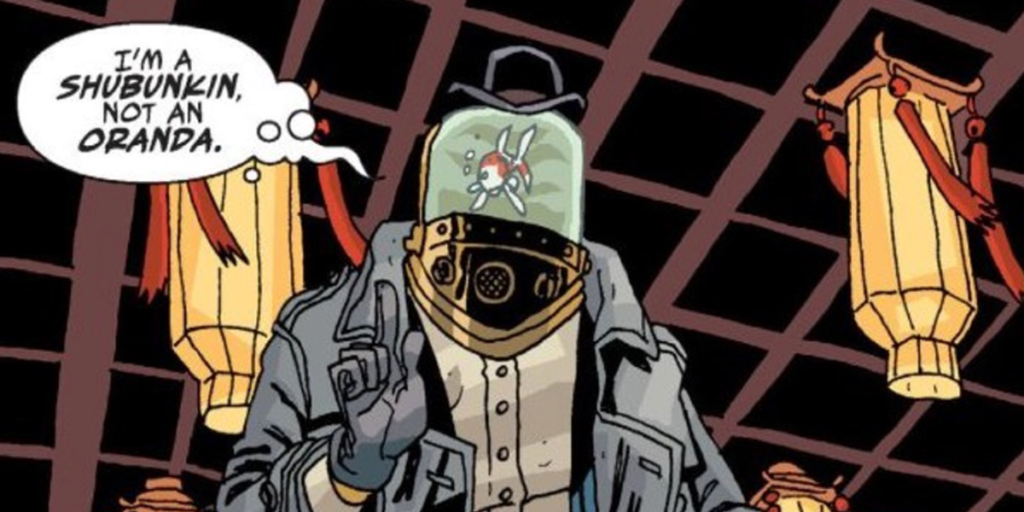 In the eighth episode, The Seven Stages, as Diego and Lila walk through the Commission’s headquarters, a woman walks by holding a large pink mask that looks a lot like Cha-Cha’s from Season 1. Someone else could have taken the mask after Cha-Cha’s death, or as we see later in the show, where plenty of other agents have similar masks, it could just be one like it. But according to Den of Geek The Umbrella Academy Showrunner, Steve Blackman said that “In the Commission, it’s always 1963, but it never changes time. So that very well could have been Cha-Cha holding the mask.” 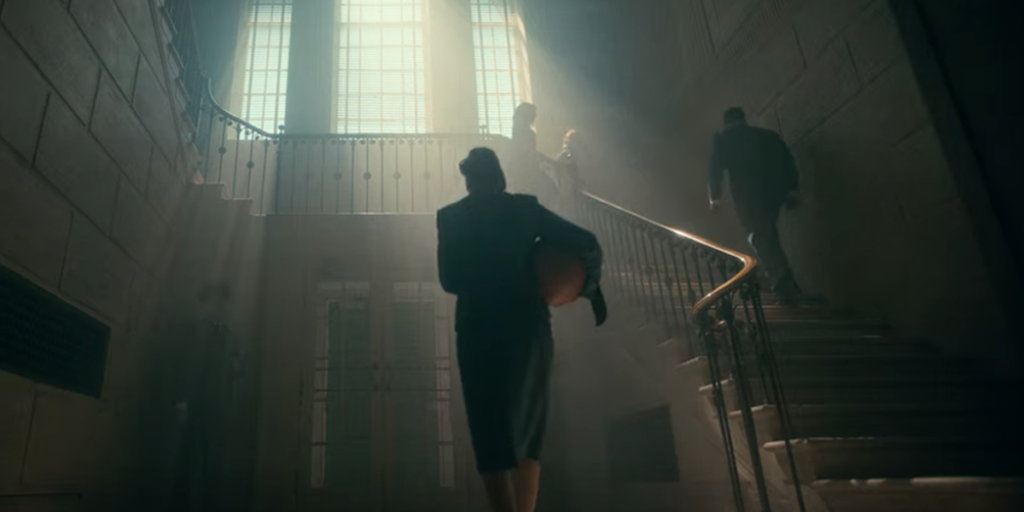 The end of these series reveals ‘The Sparrow Academy’, Sir Reginald’s team in the altered timeline. It seems likely that aside from Ben, they are a completely different seven of the forty-one children that were born without any preceding pregnancy on October 1st 1989. But there is also a chance they are just a different version of the existing team. 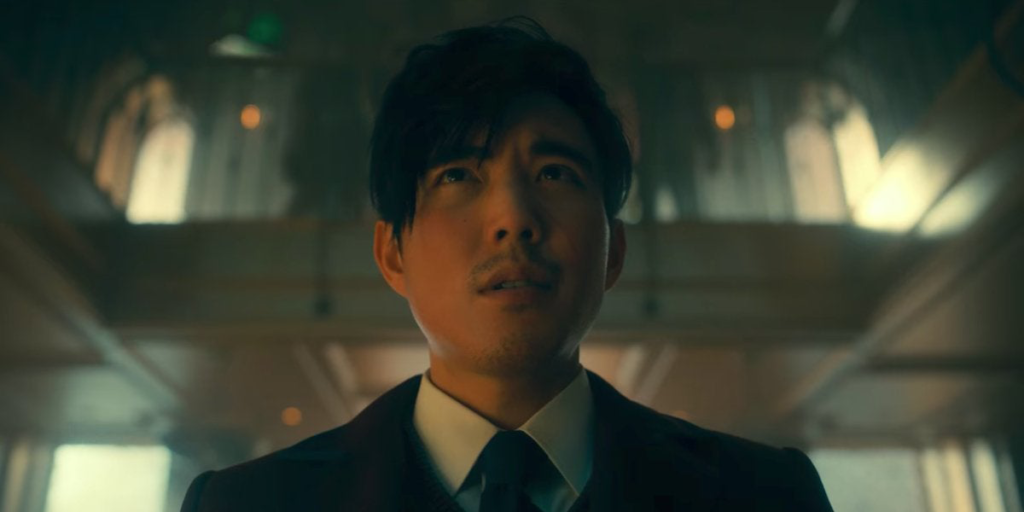 In the comics, the Sparrow Academy is the name for the upcoming fourth volume, and are revealed at the end of the third, Hotel Oblivion. In the third volume of comics, the team is a separate one that has apparently been raised similarly but separately to the Umbrella Academy, with Grace knowing all about them. They also have their own numbers and seem to be a happier and more functional team than their Umbrella counterparts.

Sparrows had been hinted at throughout the season, like on the Handler’s dress, but the biggest hint was Harlan’s toy that showed up repeatedly. The final scene of Harlan shows him levitating the toy in a car, and given that was in 1963, he could be heavily involved with the origins of the team later in his life. It’s also worth noting that Harlan is last seen heading into New Mexico, perhaps hinting at some kind of Roswell connection. 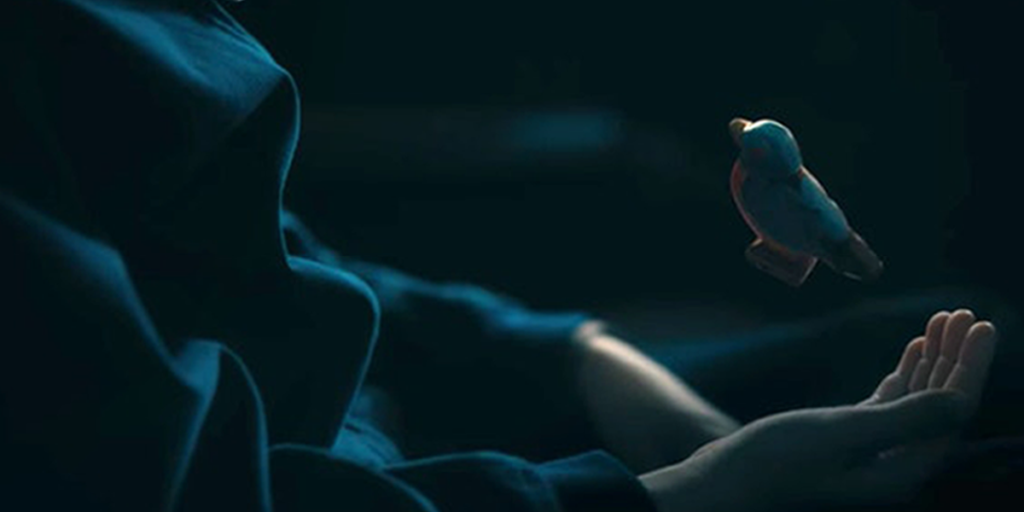 If you’ve enjoyed The Umbrella Academy Season 2 Easter Eggs, References and Cameos, be sure to check out our Season 2 Review, or our Season 2 Comic Book Differences post. 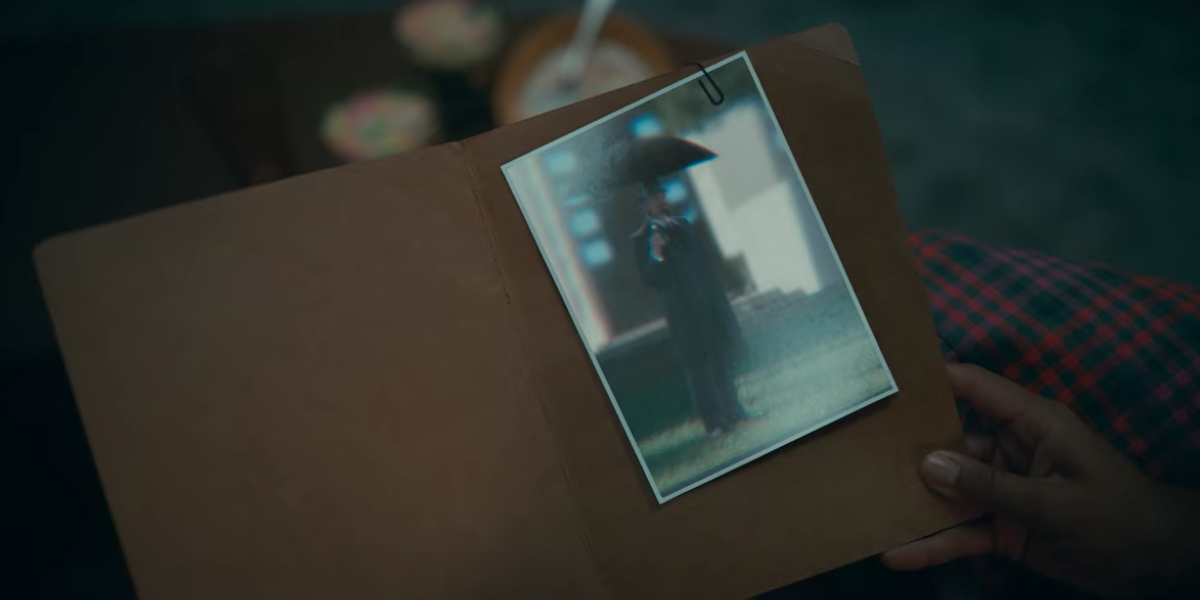