Netflix’s The Old Guard, a movie version of the comic written by Greg Rucka and art by Leandro Fernandez, is a great adaption that nails bringing the comic to the screen, and crams it full of even more gory action that the original. But as with any adaptation from one medium to another some things are altered and streamlined to make it work better for the screen rather than a comic book, in The Old Guard: The Biggest Differences Between the Movie and the Comics, we’re taking a look at the biggest changes we noticed.

One of the more subtle alterations established early on is Andy’s tech-savviness, in the comics Andy, Nicky and Joe can hardly work modern technology, and Andy doesn’t like that phones no longer have buttons (although Nicky points out she didn’t like phones with buttons at the time either). In the movie, however, she offers to take a picture for tourists in order to delete an image with her in the background, showing relative ease at removing the image and taking another – she also uses a phone multiple times without struggling. Undoubtedly a very subtle difference that has little impact on the overall plot, but one that implies the live-action version of Andy is a little more in touch with the rest of the world than the comic book version. 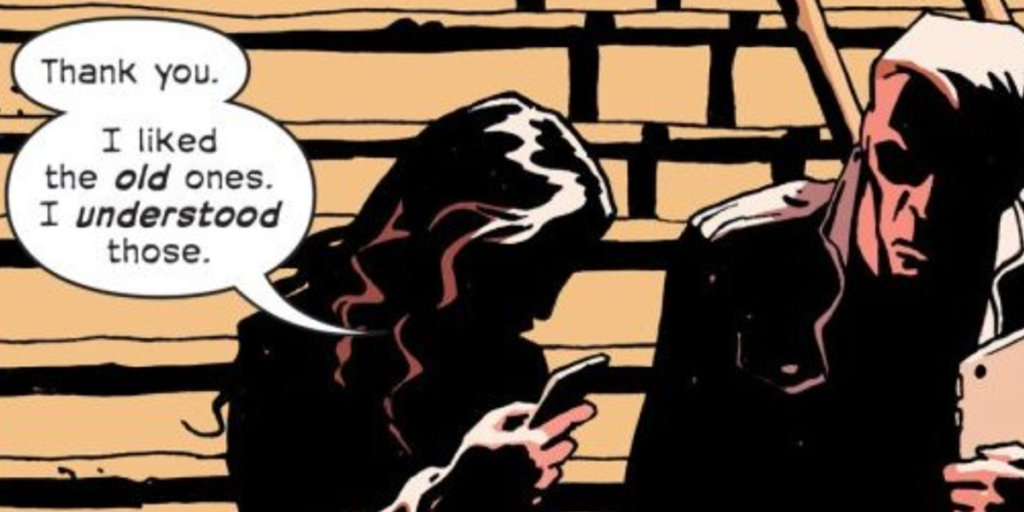 Another subtle shift in Andy’s character is a much more human Andy. Her darker side and long tortured past are revealed throughout the movie but she is extremely happy to be reunited with her team at the beginning, this is best shown in the scene where she deduces the ingredients of the Baklava. Andy’s fondness for Baklava and her joy at being reunited with her friends is a wholly new addition for the movie, as in the comics Andy is far too grumpy and serious to enjoy herself (or Baklava). Andy’s humanity is also shown in her despair for the state of the planet, and how she feels they aren’t helping. 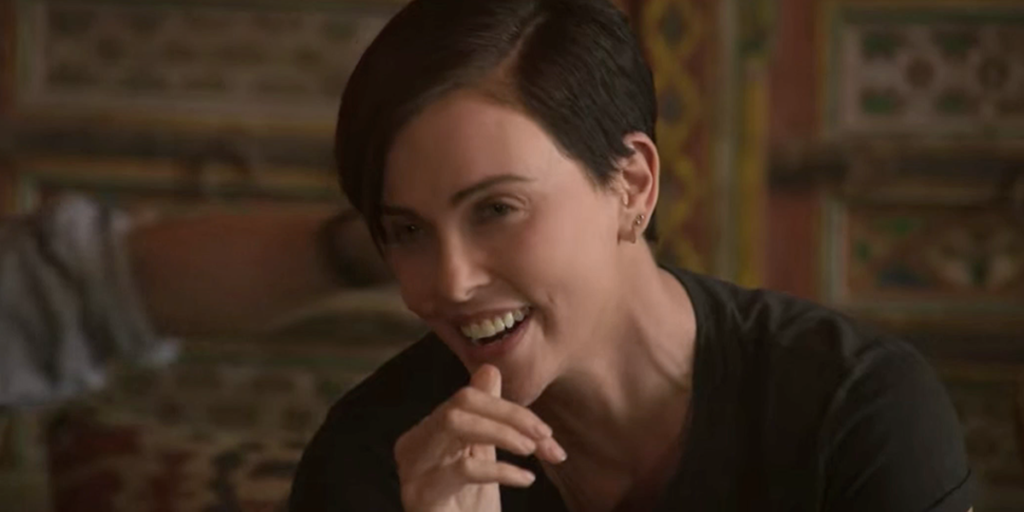 Part of why Andy is so pleased to see her team is that they have been apart and not working (or killing) for over a year according to Joe. In the comics, the team haven’t taken any kind of break and have seemingly stuck together for the most part. 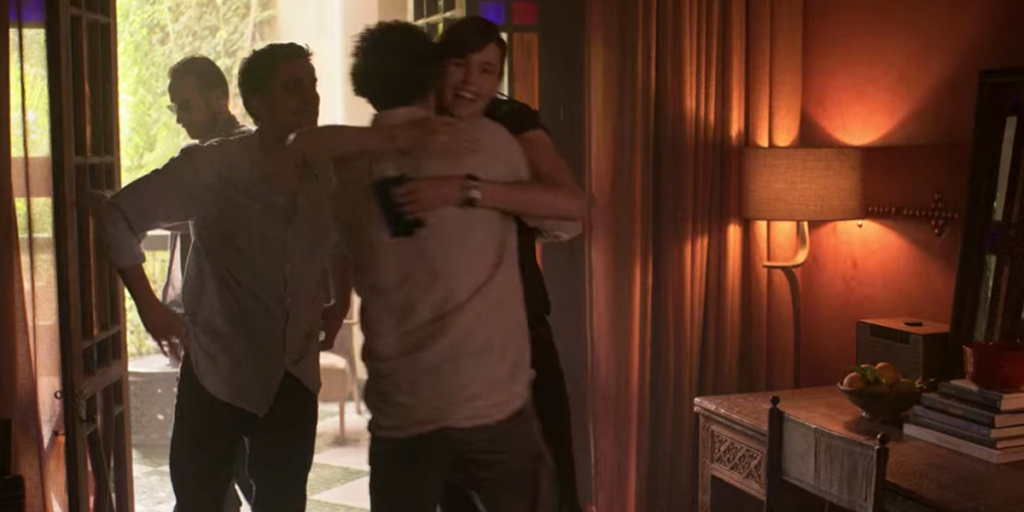 In the comIcs, Andy shoots Nile in the head to demonstrate she can’t die and then herself, showing that she has the same abilities. In the movie, Andy just shoots Nile, who then stabs her. 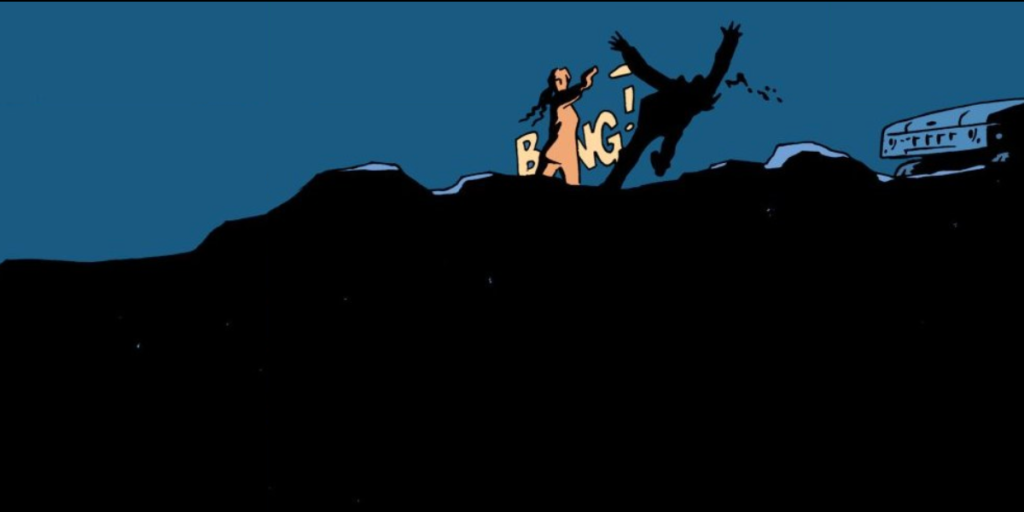 In the movie, Andy and Nile travel from Afghanistan to Paris on a drug smuggler’s plane and have a great fight along the way. The fight does some sold character building for both of them. In the comics, however, there is no fight and it is during the plane ride that Andy explains Nile needs to break ties with her family and destroys her phone. 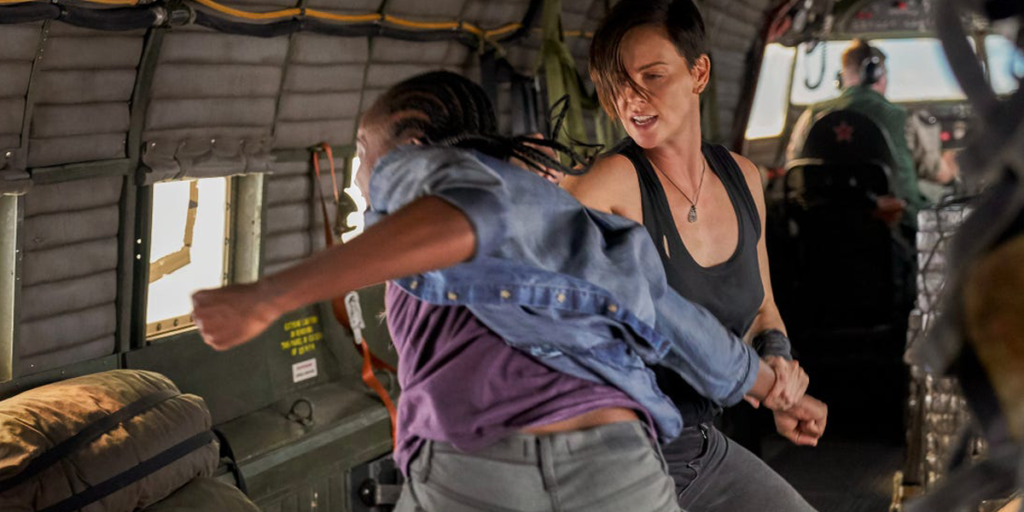 During her first night with her fellow Immortals, Nile dreams of a woman trapped underwater. She saw glimpses of this when her dreams showed her the others, but this time it was fully based around a lost immortal known as Quynh. This is a totally new addition for the movie as Nile doesn’t have these dreams in the comics. 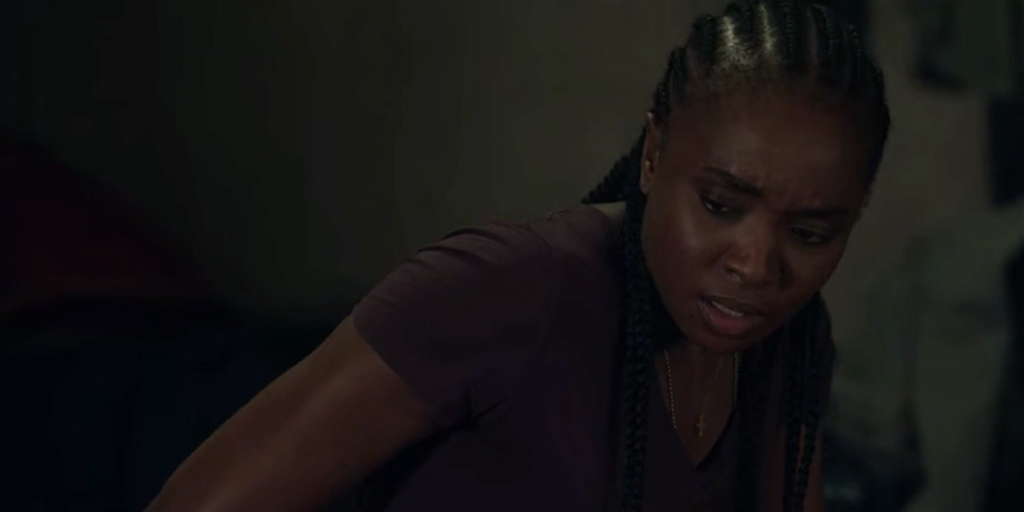 In the comics, the character of Quynh is named Noriko, and her backstory with Andy is a little different. Noriko was the first immortal that Andy dreamed of, but not the first she found – instead Andy first found another immortal, a man named Lykon.

In the comics, Andy met Noriko when she was fighting with Amir bin al-As against the Byzantine Empire – which places it around the year 640, but after years together Noriko fell overboard from a ship. In the movie, a significantly more sinister twist is added to the idea, where Quynh and Andy were convicted as witches and Quynh was put in an iron sort of coffin and dropped in the ocean. Andy, Joe, and Nicky looked for her for decades but could never find her. In the comics, Andy assumes Noriko to be dead. 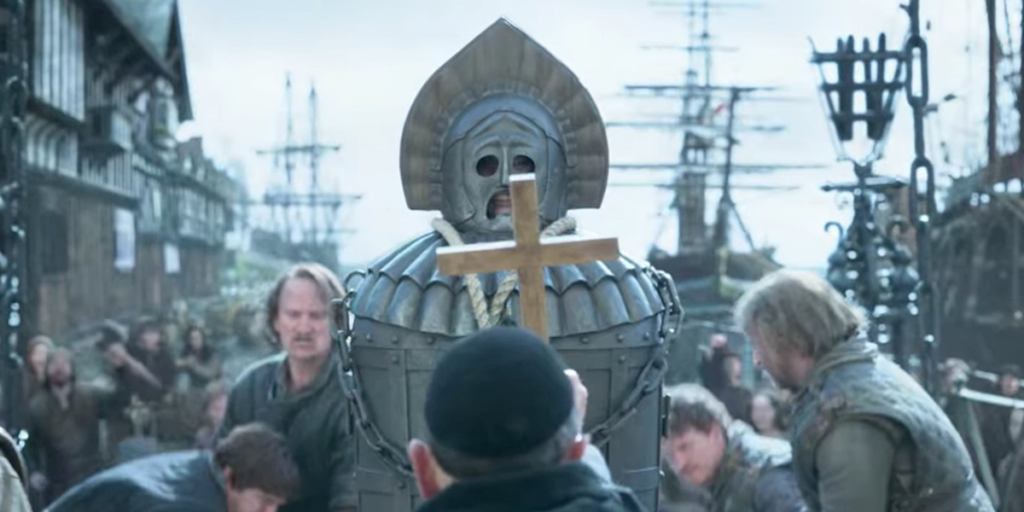 In the comics Andy had already met another immortal named Lykon before Nokiro, but left him to find her (as she had been dreaming about Nokiro before Lykon) – according to Andy, they met as Alexander conquered Judea, placing it around 332.

Lykon and Andy were together for around two thousand years until he died during the Italian renaissance, and so after Noriko drowned Andy must have returned to Lykon (or all three were together at the same time – as it looks like Noriko in the background of this panel, but that is never explicitly mentioned one way or the other, and Andy is implied to be romantically involved with both of them).

In the movie, there is a brief scene of Andy, and Quynh with another immortal as he dies (and Andy looks on upset and confused), but there is no indication of his name. 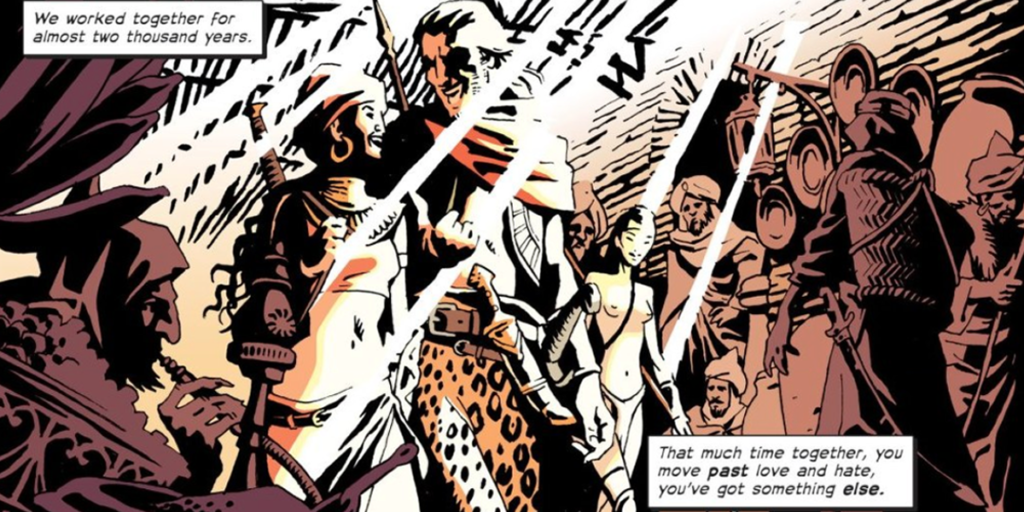 In the movie, the team is attacked and Nicky and Joe are captured whilst hiding out in an old church that has been abounded for years. In the comics, this sequence simply takes place in a regular apartment building in Paris – although much of the dialogue, Andy taking out tonnes of guys and her not so subtle signal is all taken straight from the comics. 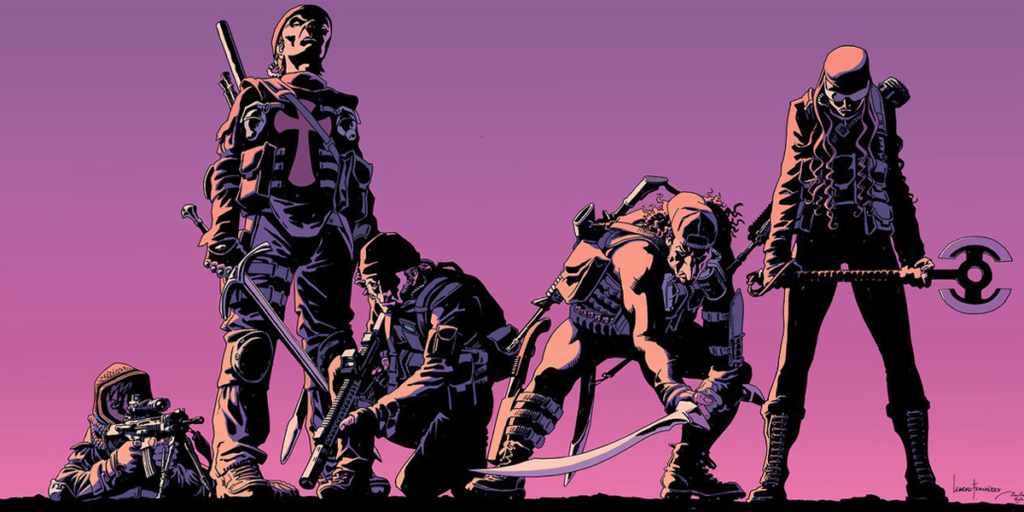 Harry Melling’ s Steven Merrick is undoubtedly a pretty terrible guy and doesn’t care about the lives of the immortals anywhere near as much as he does his profit margins. But in his defence, he is much tamer version of the character than we see in the comics.

When Merrick tests Nicky and Joe’s immortality he takes a few stabs with a devious smirk in the movie, but in the comics, he brutally stabs and murders both of them repeatedly to the shock and horror of Copley and Merrick’s security team. 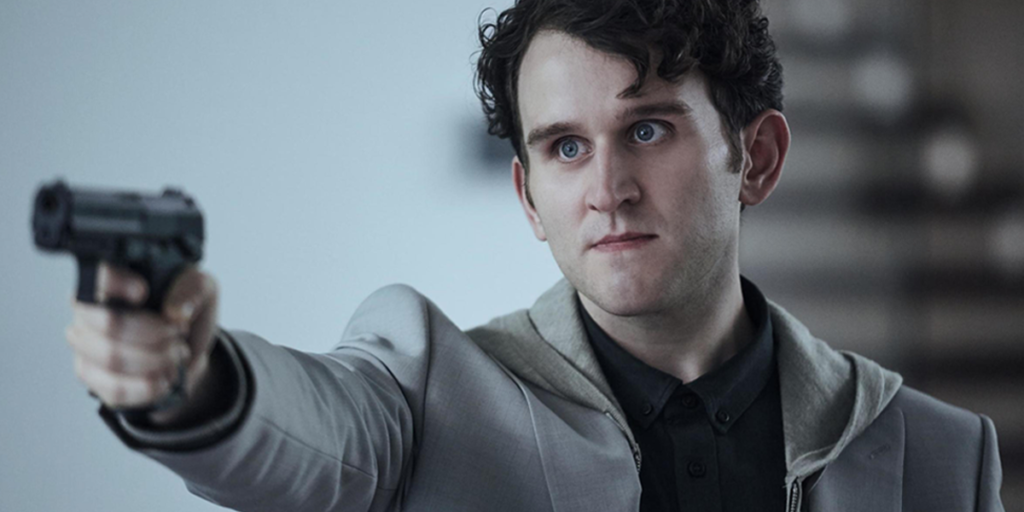 A huge part of the final act of the movie is Andy losing her powers. Although she survives the film, it will likely play a huge role going forward – this is a wholly new addition for the movie. Although. there is a definite feeling that the Old Guard comics may end with Andy’s death – she hasn’t started to lose her powers over the course of the first two volumes(with the movie being primarily based on only the first, the is a large departure). 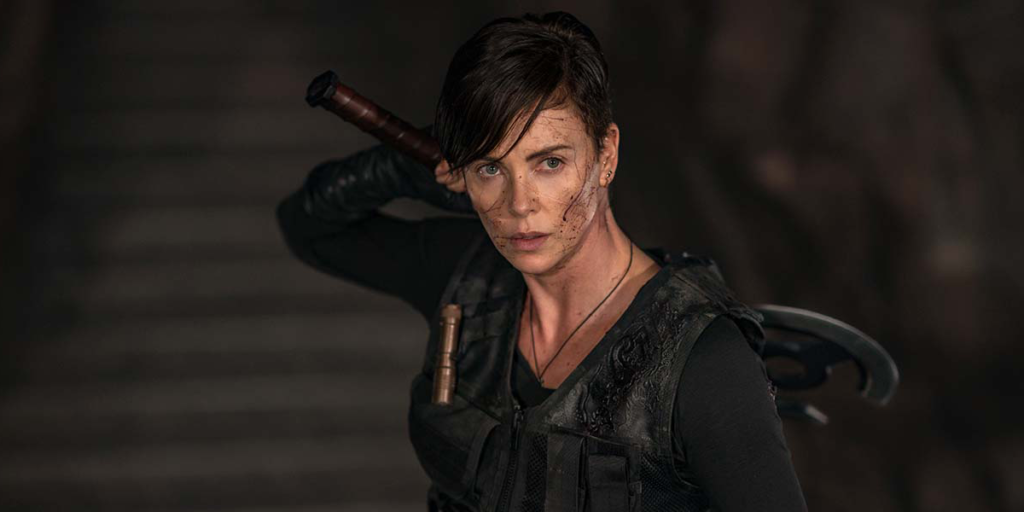 In the comics, Andy remembers Achillies, a former slave who fought for the British during the American War for Independence under the promise of freedom. He eventually ended up in London but was sent to a penal colony in Australia for stealing. There he met Andy, and the two lived together happily for decades until Andy left to avoid suspicion.

Nile sees a painting of Andy and Achilles in the cave, in the comics, which is also glimpsed in the movie – although there are no flashbacks to Achilles. 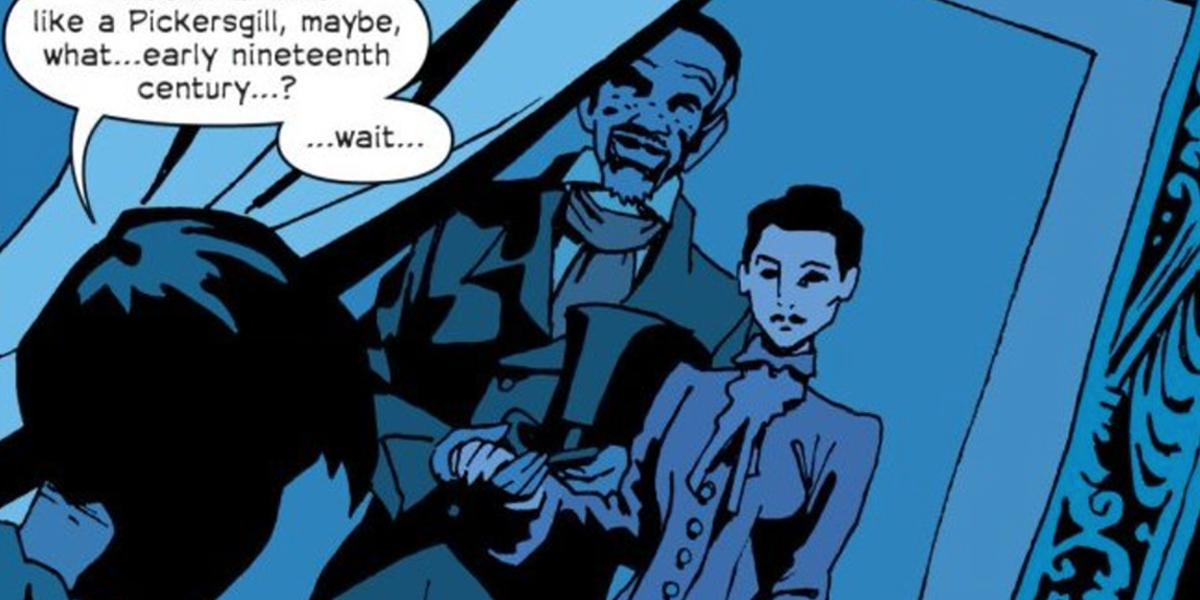 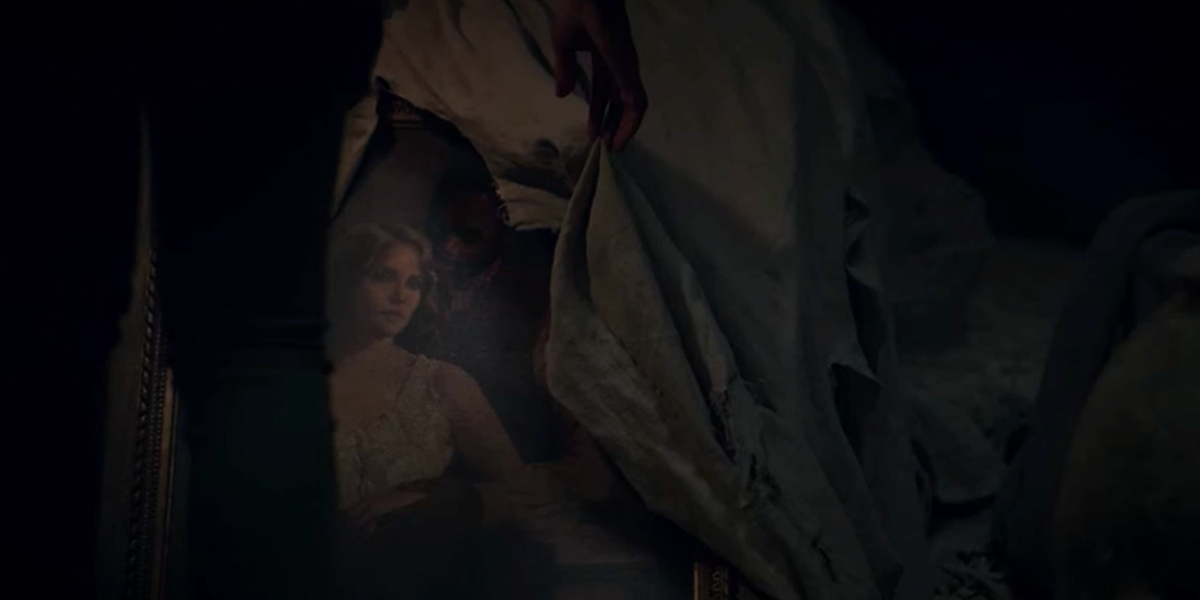 In the movie Nile decides she wants to return to her family and doesn’t want to join the Old Guard (or at least Andy and Booker) as they try and retrieve Nicky and Joe. She leaves and only returns to help after she realises Booker is a traitor.

In the comics Nile never leaves and gets her suspicions on Booker when he is pretending to research Copely’s location whilst in the cave in the middle of nowhere – Nile realises he is taking advantage of Andy not understating technology and already knows the location as he is working with Copley. This is referenced in the movie by Nile asking if Booker has a satellite link, to which he simply says yes. – he could still be lying, but it doesn’t have quite as much of an impact.

The movie version helps flesh out Nile’s character and gives her a bit more of a believable arc than just immediately being one of the team like we see in the comics. 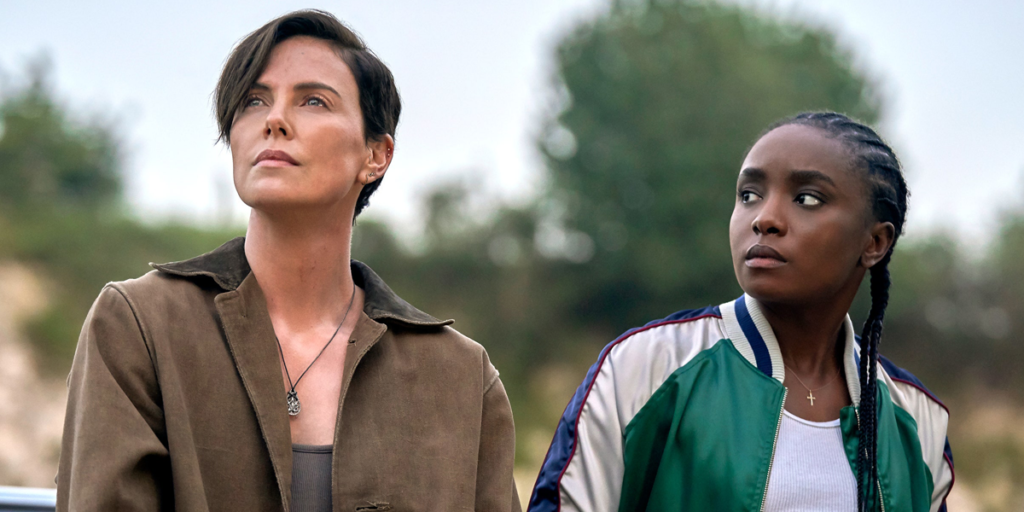 In the movie, Copley explains he began researching the team and got entangled with Merrick after his wife died from ALS. In the comics, he is simply a freelance spy who had worked with the Old Guard in the past and is now working for Merrick, whereas in the movie he believes researching the teams DNA could help the human race. Similarly, the first volume of comics doesn’t end with him helping the team on missions and covering up their tracks – although he does show up to help in The Old Guard: Force Multiplied. 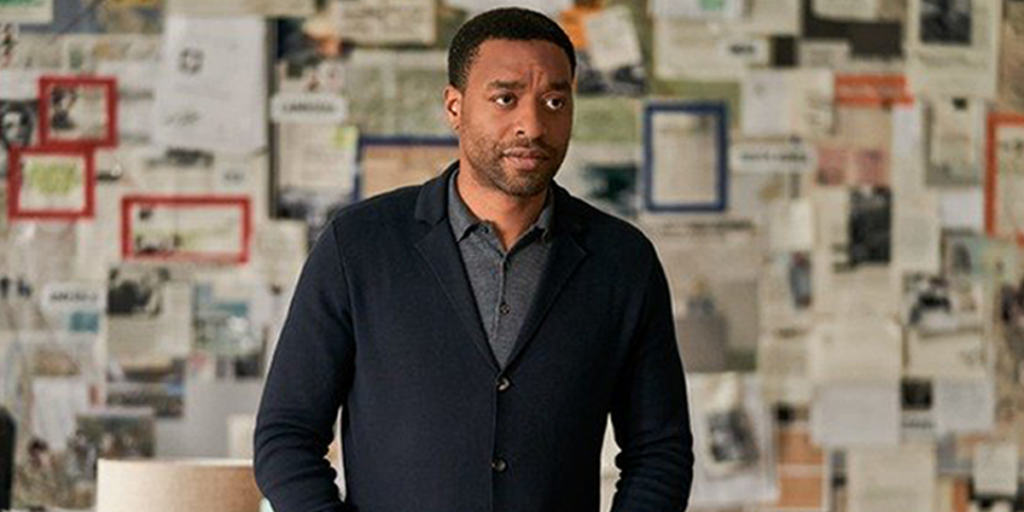 Copley explains to Nile, and then later the full team, that people they have saved throughout history have gone on (or their children, or even children’s children) have gone on – to help the world in hugely significant ways.

This is something Copely doesn’t reveal until the second volume of The Old Guard comics and says it only to Nicky and Joe in a bar. 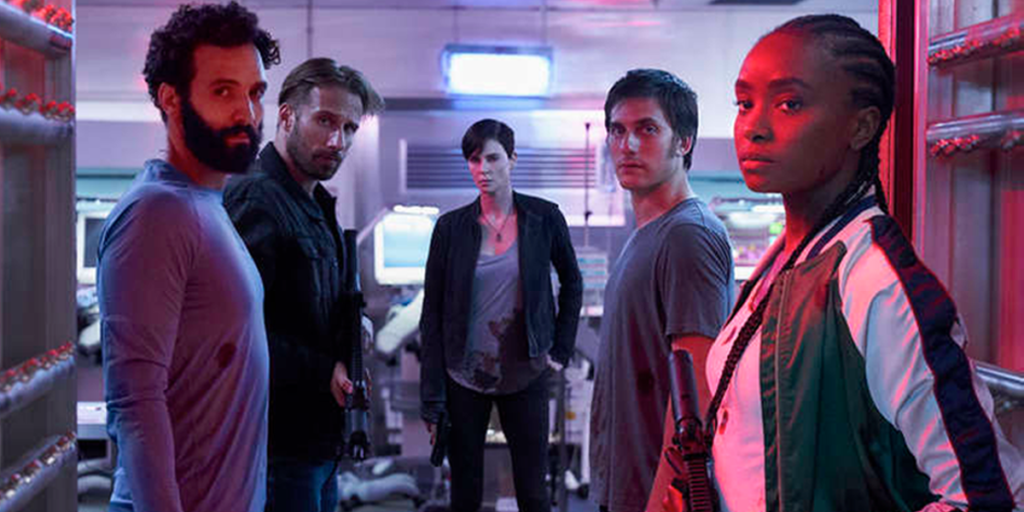 Amongst many great recreations, one of the best scenes from the comics is absent. After Booker’s betrayal is revealed, Copley explains that Booker thinks Andy is lying about not knowing her age. She admits it and says that she is “six thousand seven hundred and thirty-two years old, give or take a handful”.

It’s a great scene – although the movie has less of an emphasis on Andy saying she doesn’t know how old she is, with her being the eldest enough to serve the story. 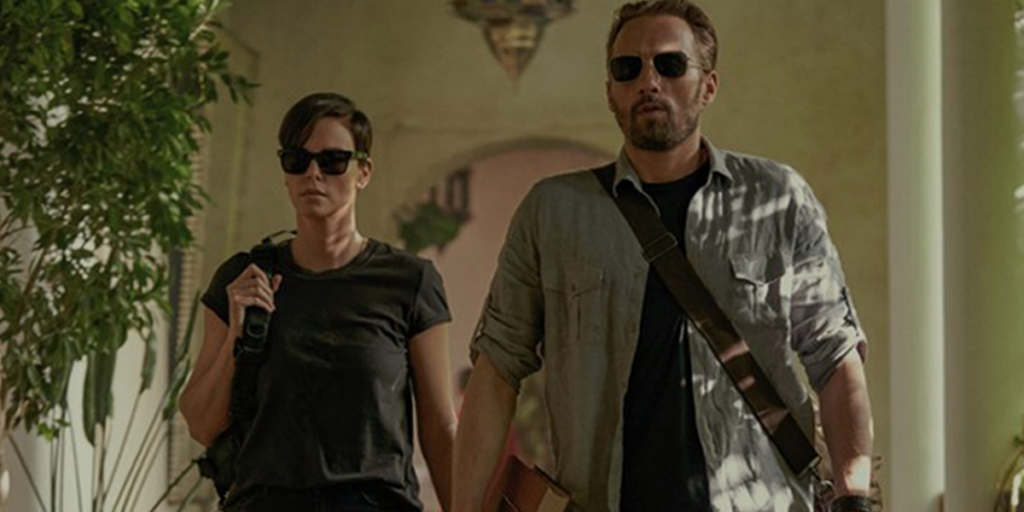 In the comics Andy and Nile jump from a skyscraper in the United Arab Emirates, which is Copely’s office. It’s just after Booker’s betrayal and they do it to escape. The movie version of the fall see’s Nile leap from Merrick’s skyscraper in London to kill him and save Andy. 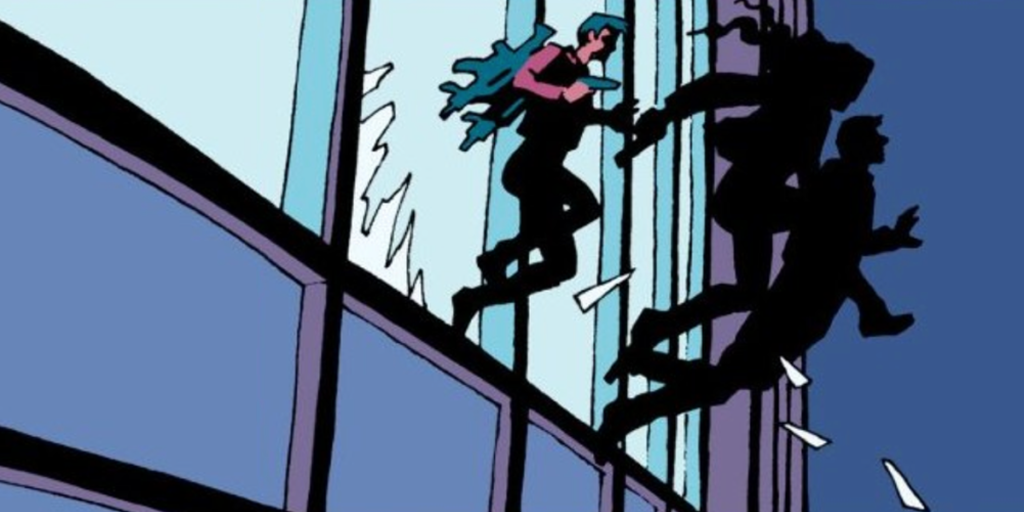 In the comics, Booker’s punishment for turning on the team is the same as in the movie – not being able to see the team for one hundred years. Except for the movie, this version has Andy losing her powers and so will likely be dead in one hundred years. It adds a tragic twinge as Booker genuinely did want to help his team die, and so not being with Andy, whom he clearly loves, as she dies is perhaps the real punishment. 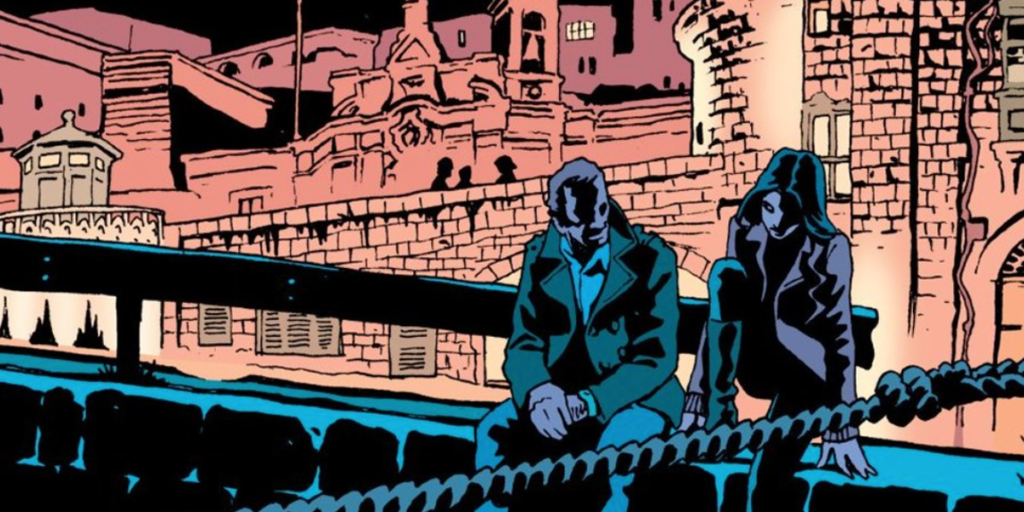 If you’ve enjoyed The Old Guard: The Biggest Differences Between the Movie and the Comics, be sure to check out our review, other videos, or our post on the differences in The Umbrella Academy Season 1, and MCU movies like The Winter Soldier, or Captain America Civil War.