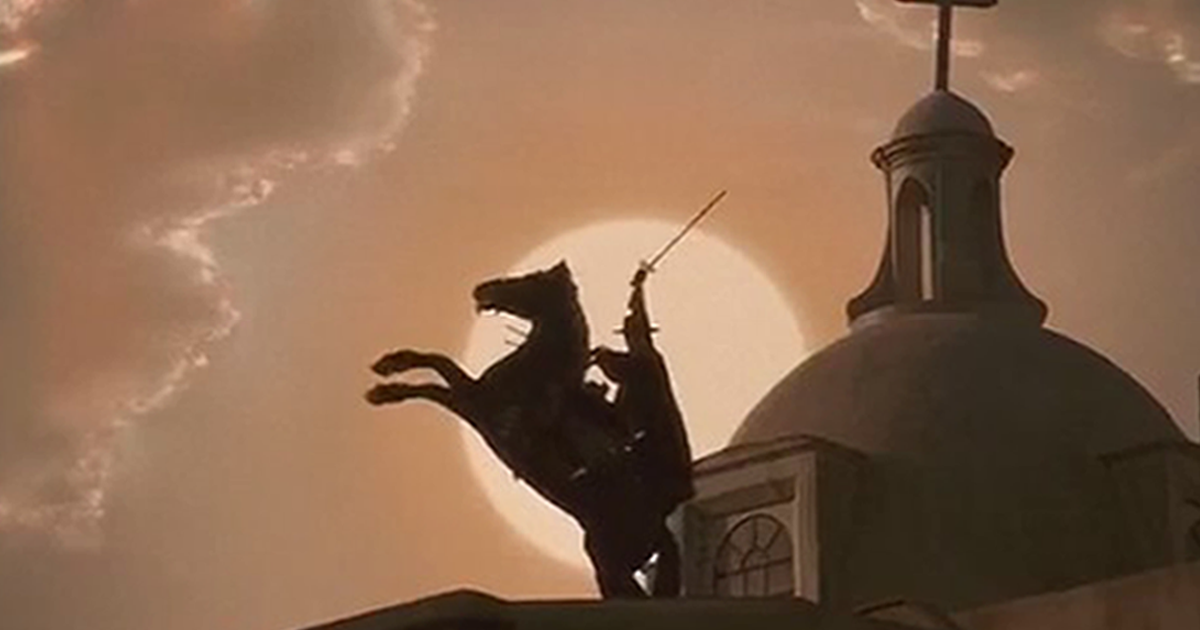 After his first appearance in Johnston McCulley’s 1919 story The Curse of Capistrano, a serialised adventure published in the pulp magazine ‘All-Story Weekly’, Zorro has since become a mainstay in pop culture, inspiring characters like Batman and appearing in numerous pulp magazines, novels, films, live action tv shows, animated tv shows, radio plays, and comics books. Even with his long history his most recognisable role (at least to a modern audience) is probably the 1998 movie The Mask of Zorro, starring Anthony Hopkins’ as the original Zorro, and Antonio Banderas as the successor to the mantle of Zorro, which still stands out as the definite take on the character and one of the best swashbuckling adventure films there is (two decades later). 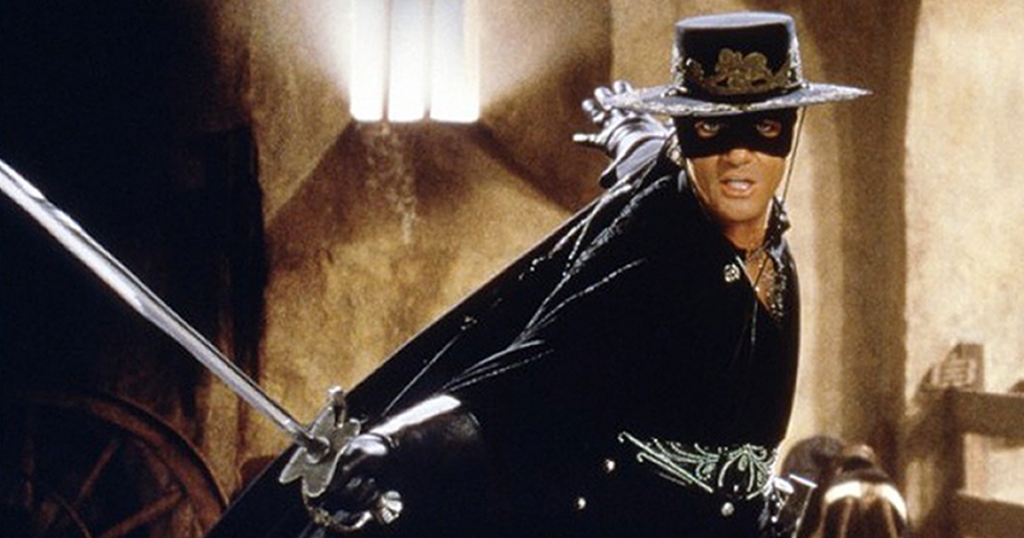 By 1998 a modern take on Zorro had been in the works for a number of years, and eventually found it’s footing with a deal from TriStar and Amblin Entertainment Stephen Spielberg’s production company (somewhere around 1991), with Spielberg going on to play a critical role throughout preproduction and filming.

After a few years of development, and a finalised script, director Mikael Salomon was hired, along with Season Connery set to star Don Diego de la Vega, the original Zorro. Eventually Salomon and Connery dropped out and Robert Rodriguez stepped into the director’s chair. Rodriguez cast Banderas as Alejandro (the younger Zorro), having worked with him on Desperado a year earlier. 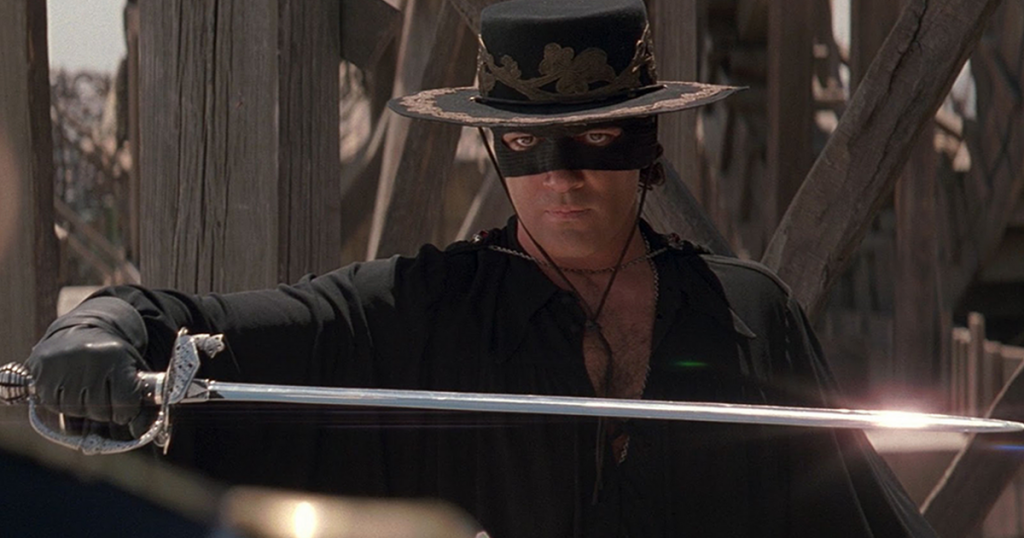 Shortly after however Rodriguez also left the picture, and Spielberg recommended Martin Campbell, who (by this point in 1996) was fresh off successfully rebooting James Bond with Pierce Brosnan in Goldeneye (and would also go on to reboot Bond again a decade later with Daniel Craig in Casino Royale). Campbell wanted to keep Banderas as Alejandro, and Antony Hopkins came onboard as Diego, he also cast Catherine Zeta Jones as Elena (Diego’s daughter, and Alejandro’s love interest) upon Stephen Spielberg’s recommendation.

In terms of story the plot revolves around both Zorro’s and their quests for revenge. Hopkins’ Diego de la Vega sees his wife killed and his daughter stolen from him by Don Raphael Montero, who hates Zorro and is forced out of California for being a ruthless tyrant. Diego then rots in prison for twenty years waiting for Raphael to return. Contrasting with de la Vega’s life of luxury as a wealthy and privileged Don (who helps the citizens of California by night), Banderas’ Alejandro starts out as a bandit who’s brother is killed by the US Army Captain Harrison Love, a young and sinister General Custer type. 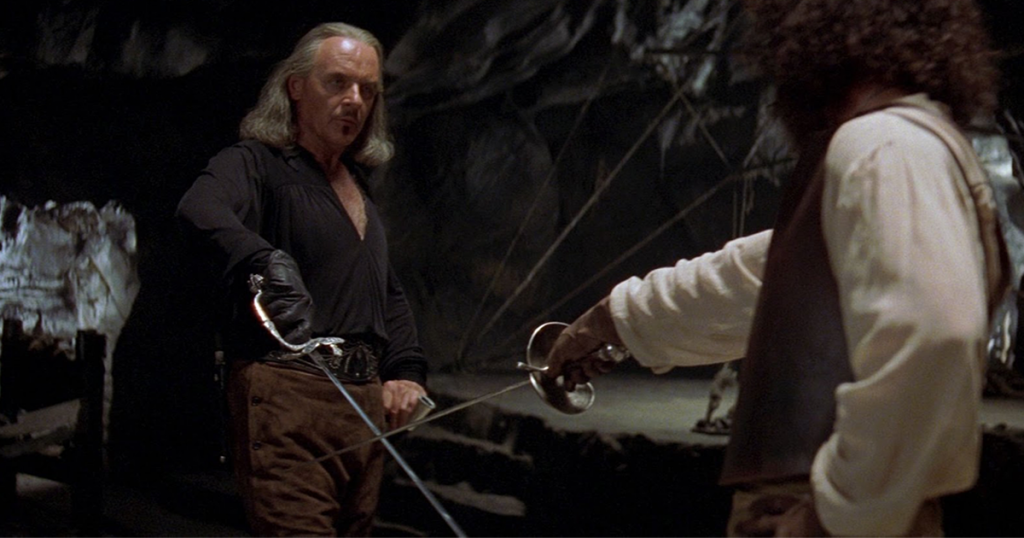 De la Vega and and Alejandro cross paths as Don Raphael and Captain Love are working together on a typically villainous and sinister scheme, and in an effort to further both of their needs for revenge de la Vega decides to train Alejandro as the new Zorro. Only complicating matters is Diego’s daughter Elena, who has been raised by Don Raphael (believing him to be her biological father), Elena starts to fall for Alejandro and Zorro (believing them to be two different people) whilst slowly realising that Diego may be her real father.

Overall The Mask of Zorro doesn’t really do anything overly original in terms of story, and follows a simple story of revenge and redemption with just enough side plots and character arcs to make it a solid piece when put together. I would however argue that simplicity is a large part of what makes the movie so much fun, and is why it endures two decades later. 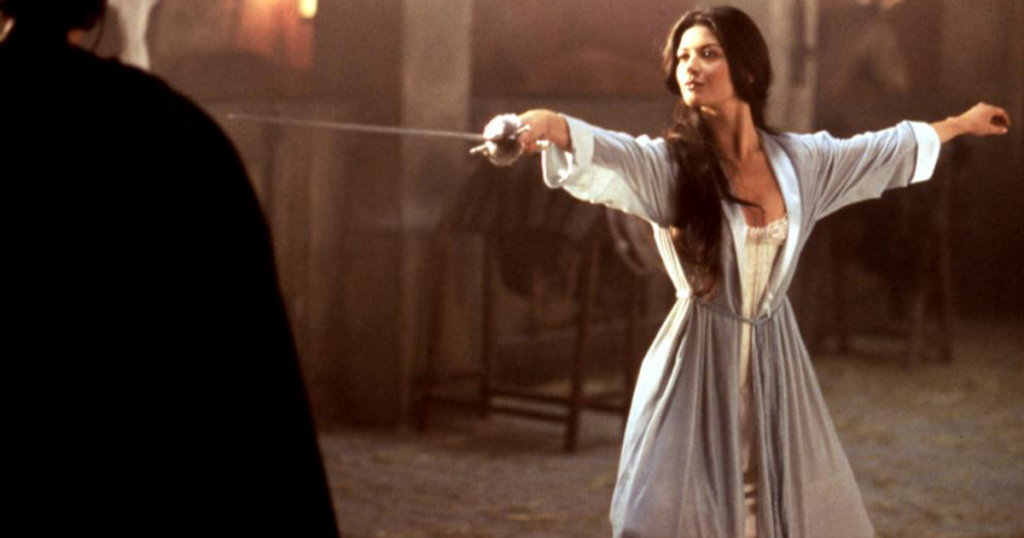 In fact, in an age of constant reboots and remakes we’re extremely used to meaningless cash grabs and the butchering of source material, but in comparison The Mask of Zorro the film goes out of it’s way to bridge the gap between the old and the new in a way that doesn’t feel to obvious or cheap despite employing a number of typical tropes. In short the real charm of The Mask of Zorro comes from it’s execution rather than it’s originality.

This is mostly helped by a stellar cast who bring so much depth to their roles, Banderas as Alejandro manages portray a particular nuance in his performance showing of his abilities as a sword fighter and incredible contrast between his bandit lifestyle at the beginning of the film against the over the top Don persona he puts on in public, with the real Alejandro being somewhere in the middle of the two. Similarly Hopkin’s brings his innate ‘Hopkinsness’ to the older Zorro, and manages to show a very layered character throughout as he struggles with revenge, learning about is estranged daughter and acting as a sort of surrogate father/mentor to Alejandro. 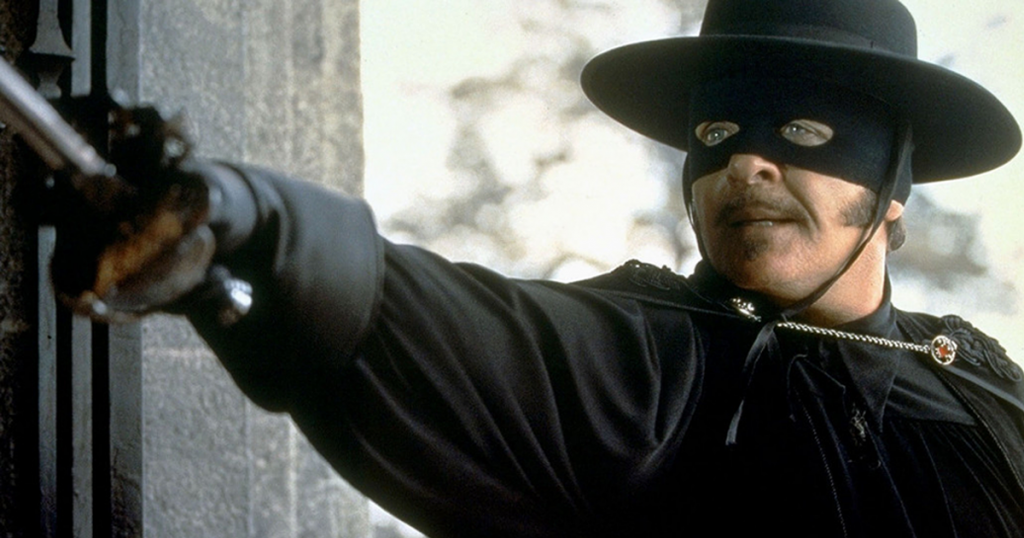 Stuart Wilson as Don Raphael is able to play more of a misguided and delusional bad guy than a simple scheming villain, whereas Matt Letscher’s Harrison Love takes more of that typical villain approach, but still manages to layer it with just enough emotion to make him fell (almost) compelling. Rounding out the main cast is Catherine Zeta Jones’ Elena, who has a solid discovery arc of her own, and is able to steal every scene she is in, with a number of the movies highlights being encounters between her and Banderas.

This chemistry between the cast, and how they play off each other is perhaps one of the bigger reasons as to why The Mask of Zorro is still so enjoyable, with the connection between Banderas and Zeta jones being so obvious and magnetic, that it doesn’t matter if Alejandro and Elena are fighting each other with swords, just making eye contact through a mask, or dancing together at a party you can feel the chemistry between the two radiating from the screen. 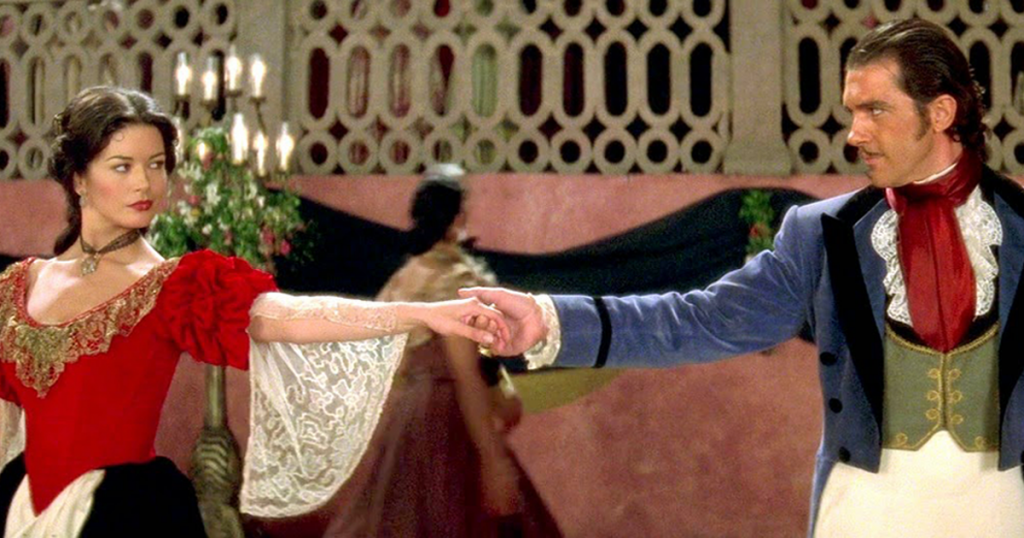 One thing you can’t help but notice with The Mask of Zorro is the incredible establishing shots brilliant use of colour, the impeccable sets, scenery, flawless sword fights, and of course the music. Almost the entire film was shot on location in Mexico (with a few reshoots taking place on the Sony lot in the US). The production team renovated a number of old hacienda’s for the film and also built a full scale gold mine set into the side of a cliff for the movies’ closing sequence. All of this work in Mexico meant that the The Mask of Zorro (at the time of filming) was the biggest movie production in Mexico’s history. Along with the sets, almost all of the costumes and jewellery were custom made for the film ensuring an extra level of authenticity, as well as making it feel that much more unique.

As all of the main cast received extensive sword fighting training it allowed for some impressive actions scenes that (when combined with the wider camera shots) are able show off clear scenes of the characters fighting, rather than the trend in modern movies to focus on close ups and hide the faces on wider shots to mask the using of stunt doubles. After all of that, the one thing that really puts the icing on the cake for The Mask of Zorro is James Horner’s musical score, with the main highlight being the flamenco dancers audio playing over the sword fights (with no orchestral accompaniment at all over most of the fights). 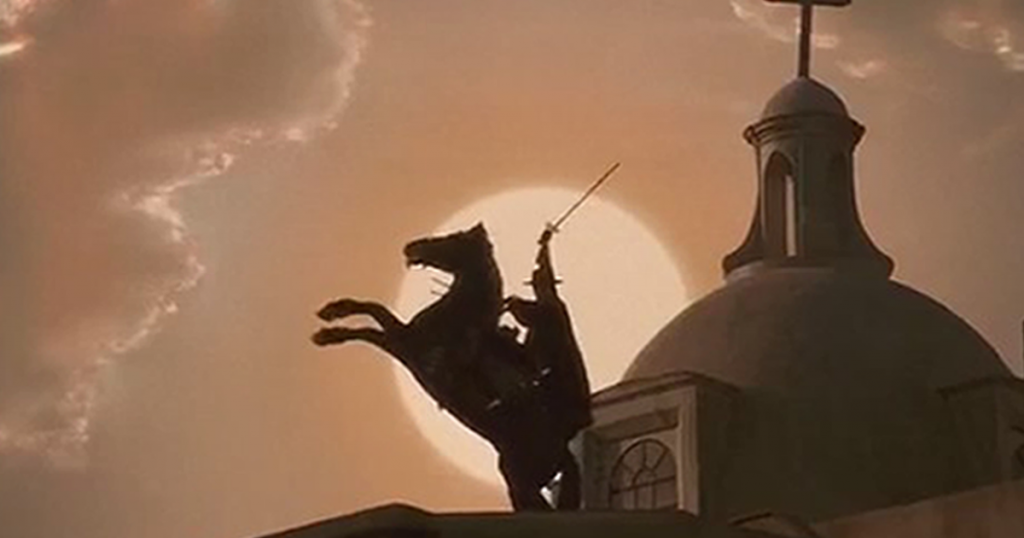 All in all everything in The Mask of Zorro really adds up to a grand, swashbuckling, adventure film that puts it’s characters, their chemistry, and their individual arcs at the forefront whilst also showing off some incredibly picturesque scenes, seamless action, and a great soundtrack, all of this gives the film an almost timeless charm, making sure that two decades on it’s still one of the best swashbuckling, sword fighting, and adventure films out there.