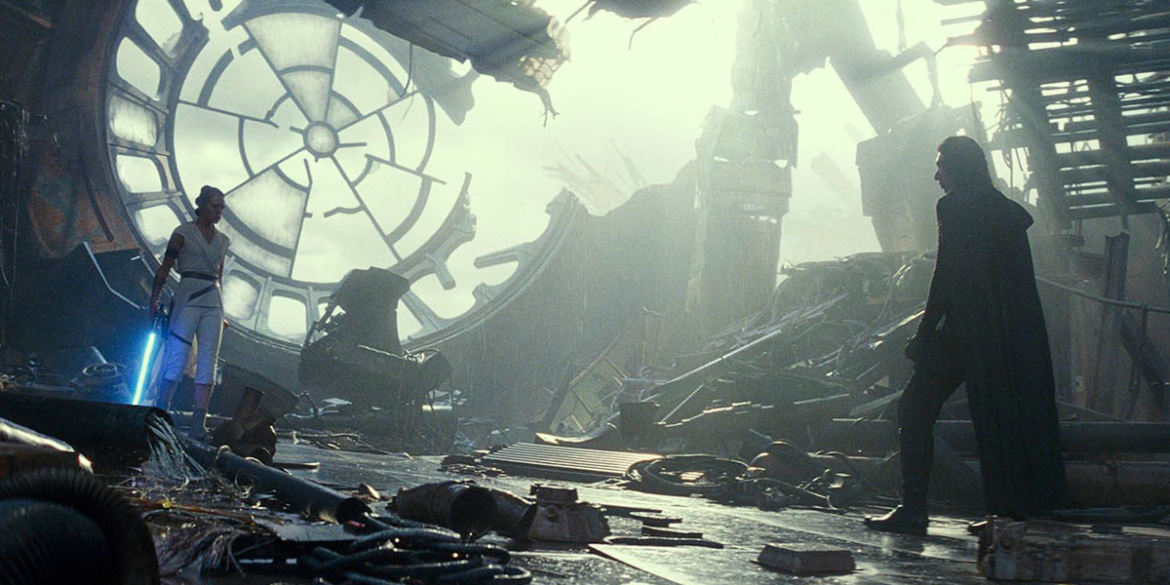 The realm of Star Wars speculation is an endless, confusing and often overly complicated space, which is something that will likely ‘rise’ to a new level in the lead up to The Rise of Skywalker. And although it’s worth taking the trailer with a grain of salt, with Disney altering scenes and adding totally new (or alternate) ones to both Star Wars and MCU trailers in the past, there is still a lot worth noting in the final trailer for Episode IX, so read on for our Star Wars: The Rise of Skywalker Final Trailer Breakdown. 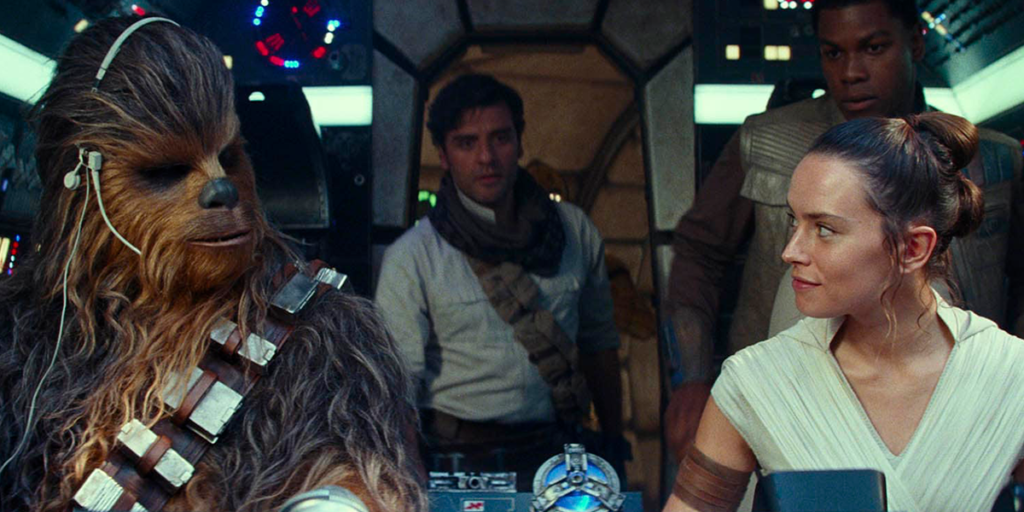 In the original Expanded Universe Palpatine’s Force spirit survived Vader’s attack in Return of the Jedi and managed to inhabit a number of clone bodies. The Emperor went on to further torment Luke, Han, and Leia for years after his original death (a more detailed account of which you can watch HERE). But as the Expanded Universe was mostly wiped clean with Disney’s purchase of Lucasfilm, making way for their own sequel trilogy it was unclear whether or not the Emperor’s survival would still play a role. Ian McDiarmid’s return as Emperor Palpatine was then confirmed at 2019’s Star Wars Celebration, although the specifics remained uncertain, with only a familiar cackle following Luke’s foreboding “no one is ever truly gone” in the initial teaser.

But the final Rise of Skywalker trailer appears to shed a little more light on how the Emperor will return, or at least the form that return will take. The latest trailer features more shots of Empire era ships emerging from ice, along with a voice-over from Palpatine, where he claims that the Resistance’s unification will be their undoing. His knowing threat and taunt gives off some very Return of the Jedi vibes and feels very reminiscent of his confrontation with Luke at the end of the original trilogy. The biggest reveal, however, is the sideways glance we get of what appears to be Palpatine himself, hidden in his signature hood, but clearly in a physical form confronting Rey whilst in an appropriately menacing-looking throne. 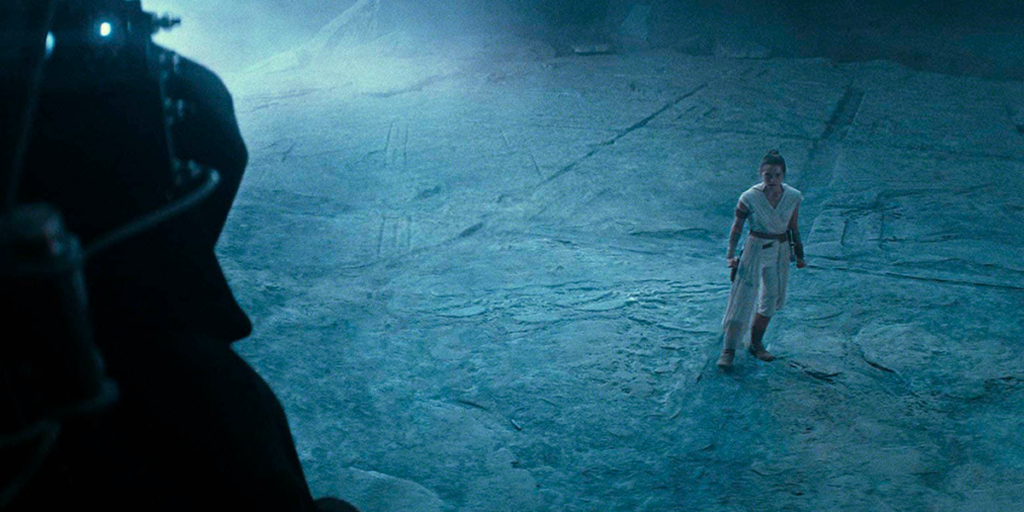 Star Wars fans have seen Sheev Palpatine occupy more than his fair share of elaborate thrones throughout the Skywalker saga, but perhaps none more elaborate than his latest one. According to Phil Szostak, who wrote the ‘Art of…’ books for The Force Awakens, Solo, and The Last Jedi,  this throne is taken from an unused Ralph McQuarrie concept for Return of the Jedi. Recycling older ideas is a method much of the sequel trilogy has utilised, repurposing lots of unused art and ideas from the original trilogy, in particular, that of Ralph McQuarrie, the artist Lucas brought on board early on and who almost single-handedly defined the look of Star Wars. 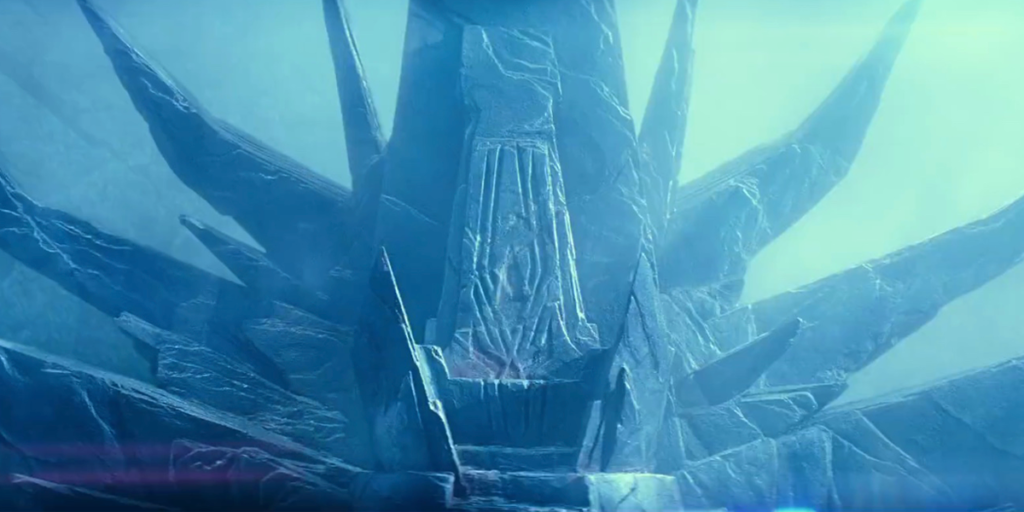 The mysterious connection between Rey and Kylo Ren is one of the core pillars of the sequel trilogy. Kylo embraced his darker side in The Last Jedi after it looked as though he may be on the path back to the light side thanks to Rey, but seeing Luke pushed him over the edge and what little good remained looked to disappear. Similarly, Rey dabbled with a look at the darker side of the Force but came out of The Last Jedi as all that is left of the now fabled Jedi Order. And yet the two characters seem connected through the Force, in a way we haven’t seen before.

With the two now back on opposite sides, leading their respective factions, it looks as though the Rise of Skywalker, will continue to play on this mysterious connection between the two characters. The original teaser and promotional material focussed on the two fighting once again, and yet a brief scene in this final trailer show more of that fight scene but another shows them working together. 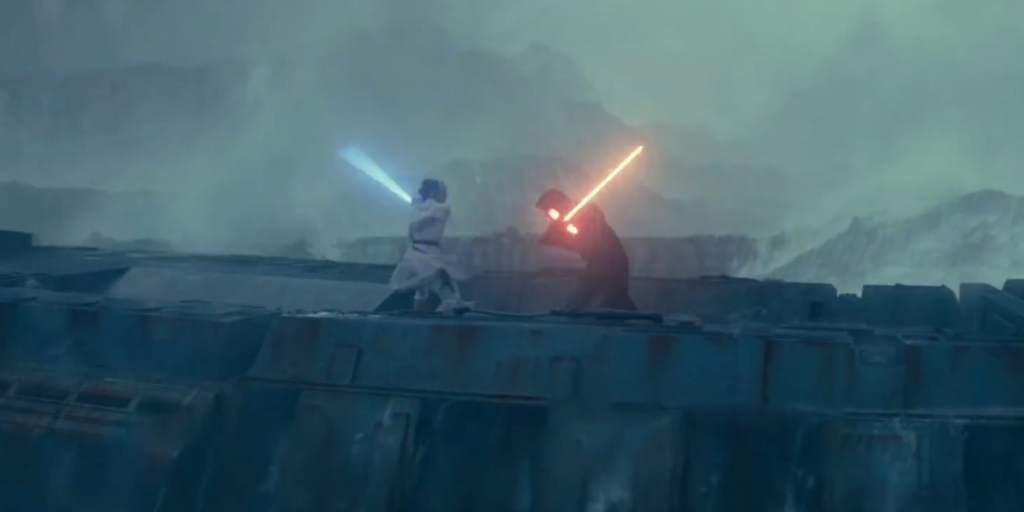 The scene in which Kylo and Rey work together sees the duo destroy what looks to be some sort of shrine to Darth Vader. Vader’s legacy, or a version of it, looms over Kylo Ren, with both his actions and appearance being an attempt to emulate his grandfather’s darker side. The Force Awakens shows Kylo talking to what is left of Vader’s mask, but the shrine looking object in the Rise of Skywalker looks a little different to that one.

It does appear to have Vader-type mask on the top, but it looks much bigger than the stand Kylo has for Vader’s helmet in The Force Awakens, and the setting around it feels different to Kylo’s ship. The design of this new area feels reminiscent of the Empire, but it’s not as dark or sinister as most Empirical or First Order ships we’ve seen. It could possibly be an occupied version of somewhere like Kamino, a place that is also very clean, almost medical looking, and made up of prominently white, brightly lit panels. If it was Kamino, it could perhaps hint at some sort of cloning of either Vader or Palpatine (or even Rey or Kylo, or Luke, or Jar Jar, or anyone really…).

Another interesting part of this scene is that Rey is wielding what looks to be a hand made dagger, a new weapon for her that adds to her staff, lightsaber, and the red lightsaber pike she has at the end of the first trailer (check out our post on that style of lightsaber, where we’ve seen it before and was it might mean HERE). 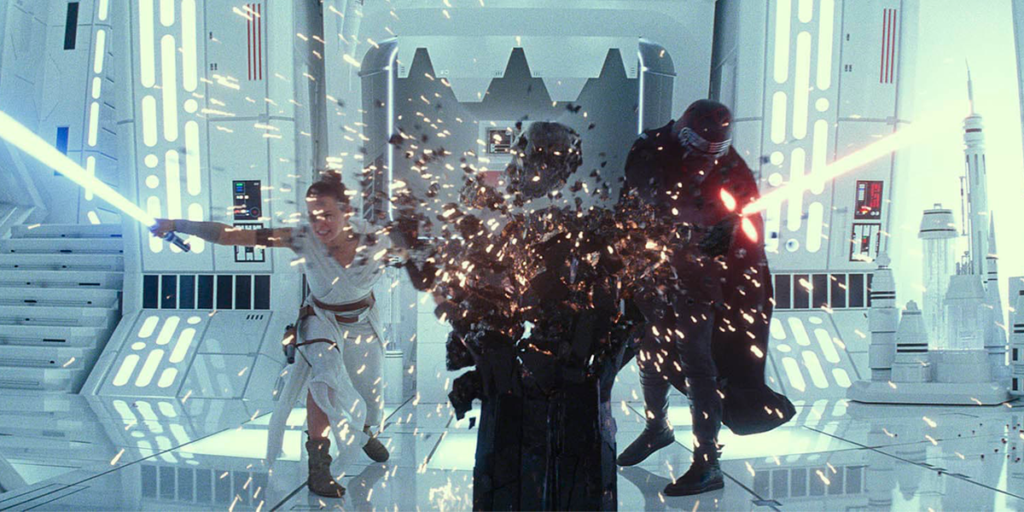 Dominic Monaghan rose to prominence as Merry in the Lord of the Rings Trilogy, and later starred as Charlie Pace in Lost, a series co-created and produced by J.J Abrams, the director of both The Force Awakens and The Rise of Skywalker. Not much is known about Monaghan’s role in Episode IX, but he has publicly made his interest in being in a Star Wars film clear for years, and the final trailer finally gives fans their first look at him. 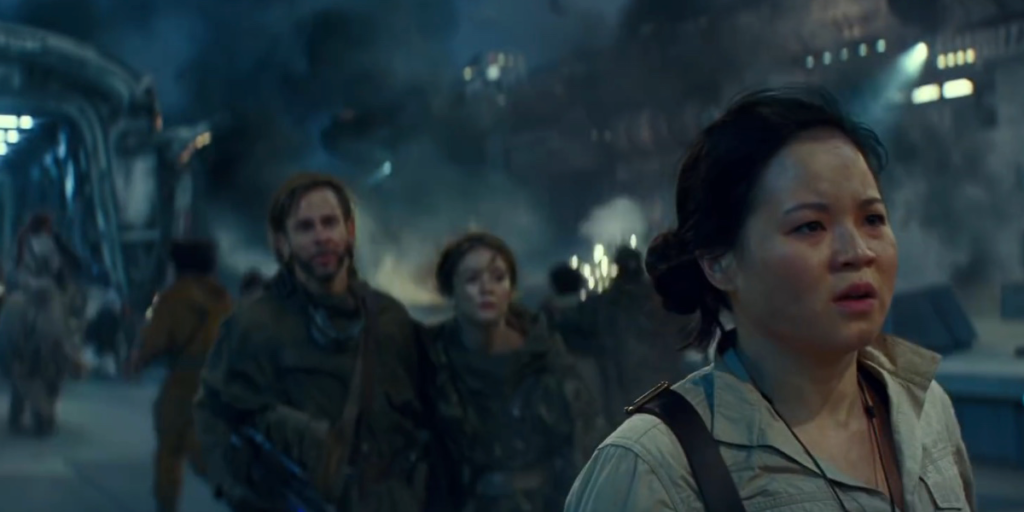 As Star Wars has expanded into various animated shows and live-action spin-offs, the universe has become that much more interwoven. One of the best examples of this was the subtle references to the Star Wars Rebels animated series in Rogue One. The Rebels series focusses on an early band of insurgents that play a key role in forming the rebellion. Although the ultimate fate of a number of main characters was left ambiguous at the end of the fourth season, some characters had a more clear path ahead of them, one of those being Hera Syndulla.

Syndulla herself is the daughter of Cham Syndulla, a recurring character in Rebels’ precursor series Star Wars: The Clone Wars, and featured in both shows, as well as getting a few nods in Rogue One. These references included an appearance of the Rebels ship ‘The Ghost’ as the rebel fleet rallied above Scarif in the climactic battle of the film. Another was the call for the now ‘General Sendula’ in the background of a scene at the Rebel Base and the last was the live-action debut of Chopper, the Ghost crew’s faithful but temperamental droid.

It looks as though General Syndulla is still a big part of the Rebellion turned Resistance, or at the very least her legacy is, with what looks to be the Ghost appearing once again, this time right next to the Millennium Falcon, as the Resistance fleet assembles. 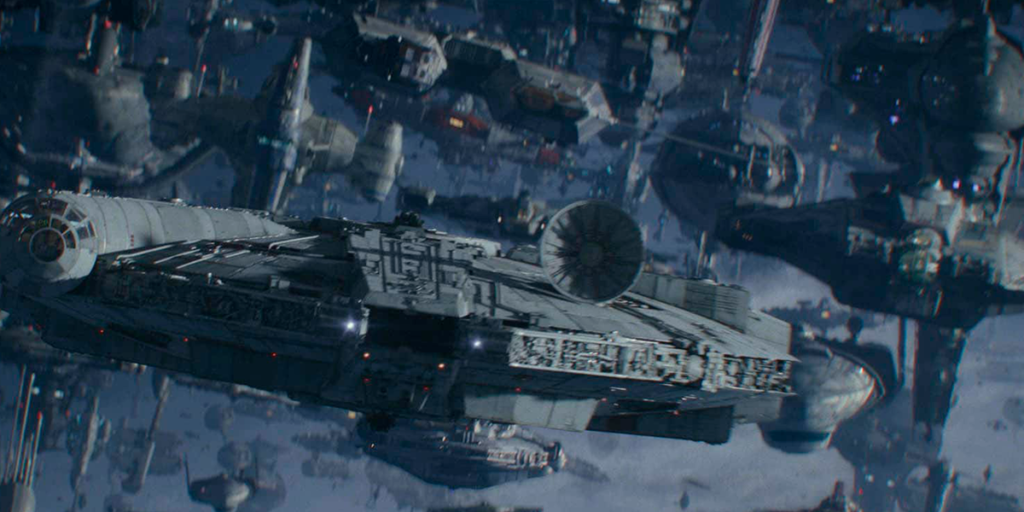 The Emperor’s (apparent) end came in his throne room aboard the second Death Star at the end of Return of the Jedi, the iconic location of the final confrontation between Luke, Vader, and the Emperor makes a return in The Rise of Skywalker. Amongst a number of shots of damaged areas, one is notable as clearly being the remnant of Palpatine’s Death Star Throne Room. 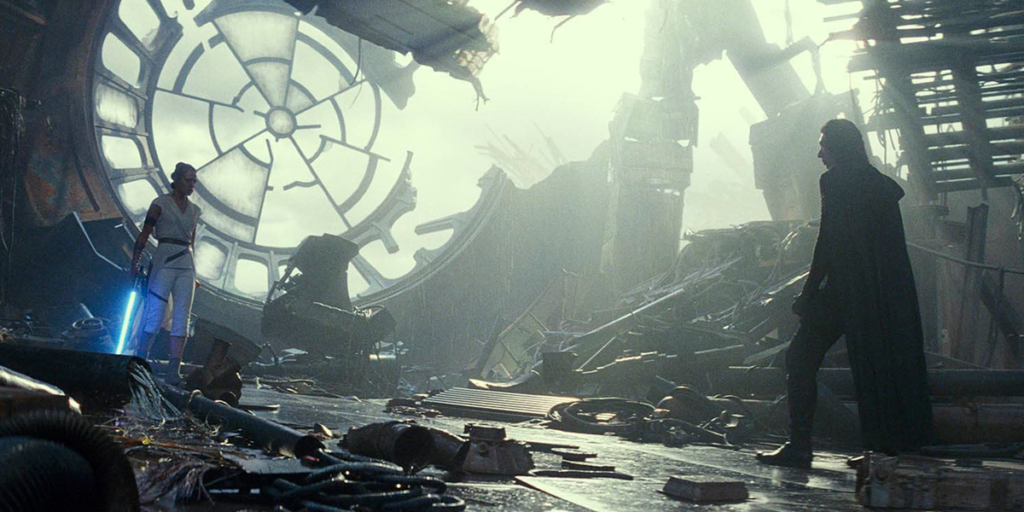 Billy Dee Williams had long been rumoured to be making a return to the Star Wars Universe, and is finally doing so in The Rise of Skywalker. Although his exact role is still vague, it does look key as we’ve now seen him piloting the Falcon alongside Chewbacca and in what looks like a Resistance planning meeting alongside Poe. Whether Lando has always been a part of the Resistance and has simply been absent or missing so far, or he returns in the wake of Han, Luke, and (presumably) Leia’s absence is yet to be revealed. 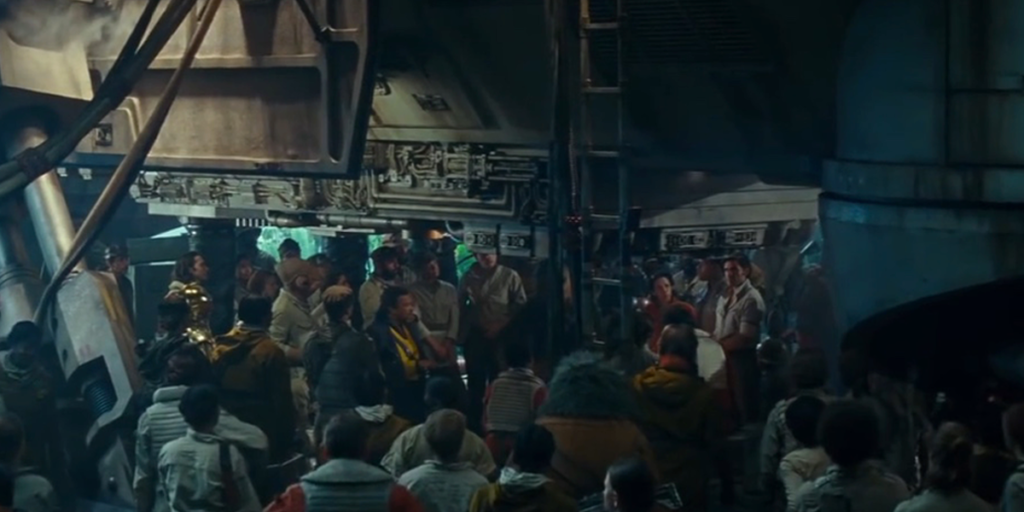 C-3PO was, of course, the first character to speak in the original Star Wars movie, being a key part of the franchise ever since. Anthony Daniel’s well-meaning, if not a little stuck up protocol droid has featured prominently in both the live-action and animated parts of the Star Wars Universe.

The first trailer for The Rise of Skywalker showed a red-eyed C-3PO, which seemed to hint that he’d been hacked or taken over, and so it looked as though he’d be playing what may be his biggest role yet. The final trailer slows down for what may be it’s longest individual scene on a C-3PO sequence that has him hooked up to some wires and saying he wanted one last look at his “friends”.

A strangely emotional beat for the often heartless protocol droid appears to imply that C-3PO may sacrifice himself for a Resistance victory. Although sad, C-3PO who has been such a key part of the series and is, along with R2-D2, one of the few surviving original characters may serve an appropriately symbolic and fitting purpose by dying in the final film. 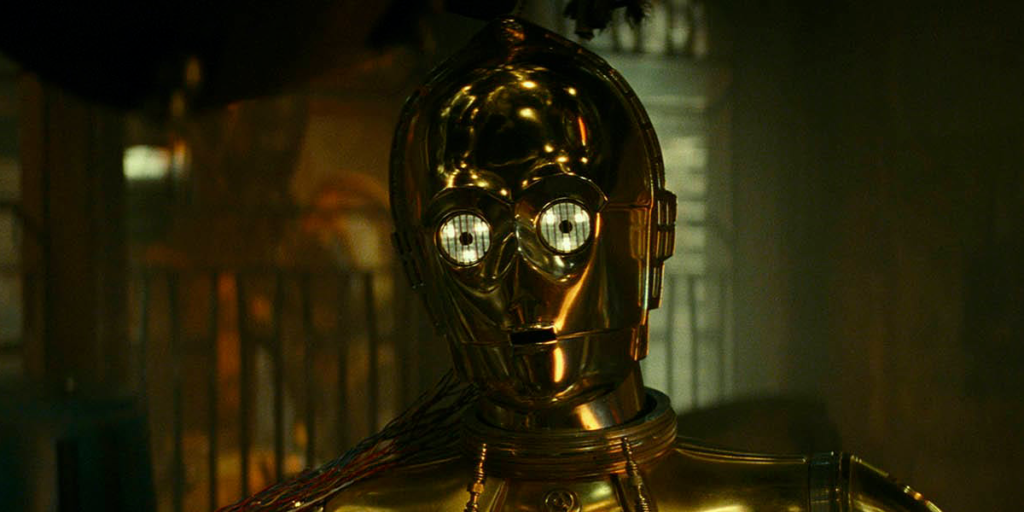 The ninth episode of Star Wars will see the Skywalker Saga, which began with the original movie in 1977, finally, come to a close, and so Luke, his sister Leia, his nephew Kylo Ren, and possibly even Darth Vader/Anakin Skywalker will likely play a large role in one form or another.

The trailer delivers even more voiceover from Luke, despite his apparent death in The Last Jedi, it also shows Rey and Kylo destroying a Vader shrine, and features another glimpse of Leia. And so whether Rey is revealed to have a more literal connection to the Skywalker’s, or it’s more thematic, with ‘Skywalker’ possibly becoming a new term for more balanced Force users (neither light nor dark) is yet to be seen, the only thing that is certain is that the Skywalkers will take centre stage one last time. 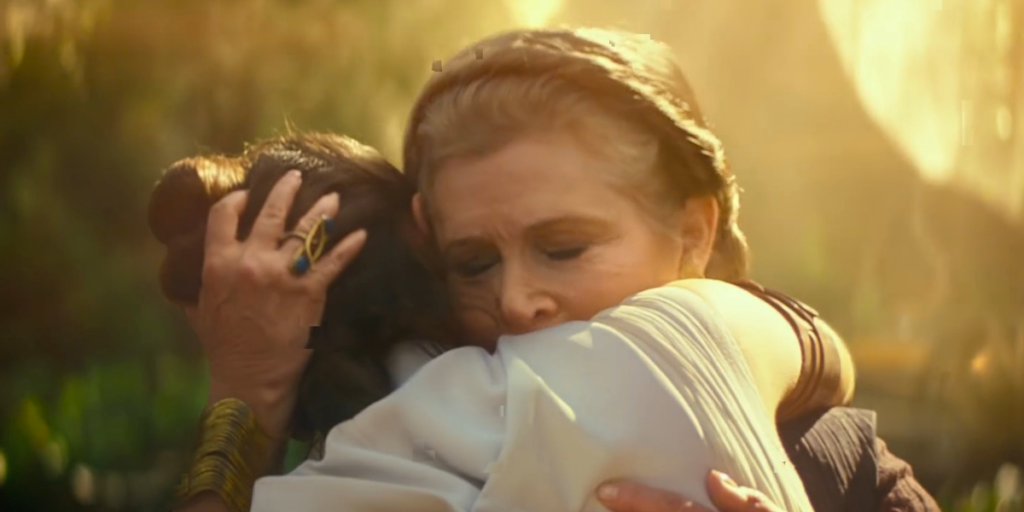 To watch the trailer for yourself see it on YouTube: