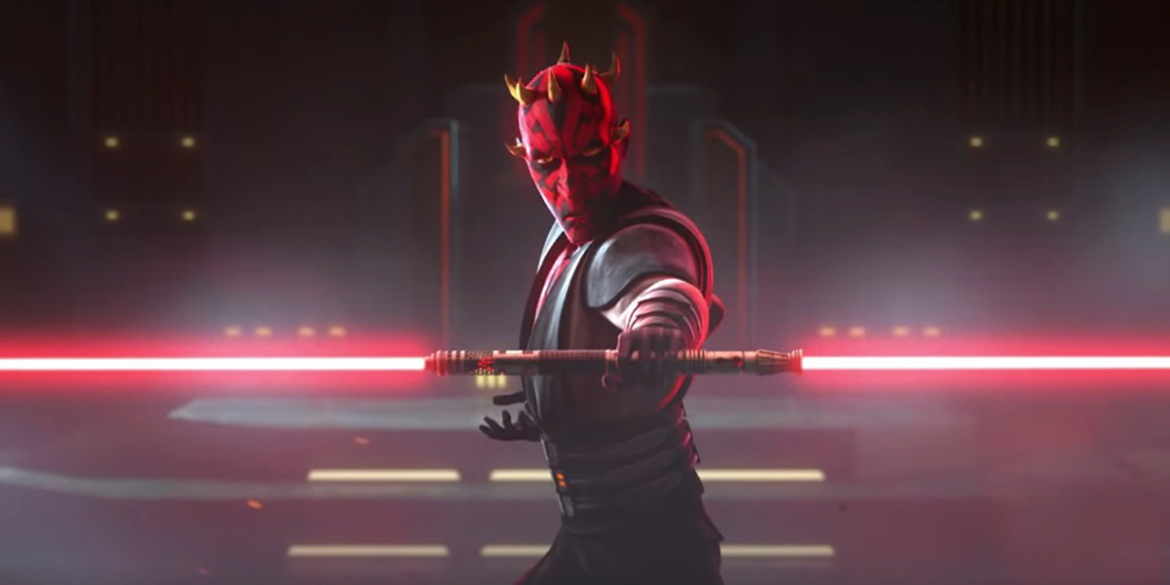 The Clone Wars animated series is one of the Star Wars franchises most popular properties, One that has gathered a giant fan base since it began with a feature film in 2008. Although it had a consistent stream of success, delivering some silly family-friendly fun in some episodes, but some deeper and more emotional arcs that massively expanded on Star Wars lore in others, the show was cancelled after six seasons when Disney bought Lucasfilm (during early production on its next season). Disney then launched their own animated Star Wars show with Star Wars Rebels. Nearly five years later, however, Disney announced a return to the unfinished series with a seventh and final season on the Disney + streaming service. In our Star Wars The Clone Wars Season Seven Trailer Breakdown we take a look at the biggest hints and easter eggs at what’s to come for the end of the Clone Wars. 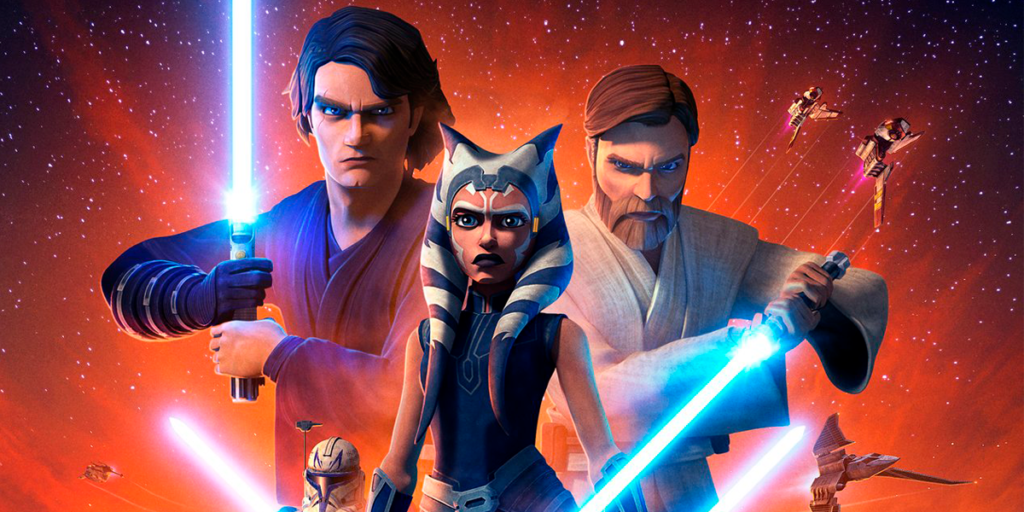 One of the biggest things from the trailer is the number of hints that at least part of the final season takes place during Episode III. The whole Clone Wars has so far been focussed around telling the story in-between Attack of the Clones and Revenge of the Sith, and so venturing into the events of Episode III may seem like an unexpected turn. But the move allows the series to showcase how characters like Ahsoka and Rex, both fan favourites who don’t appear into the movies, deal with the events of the Clones turning on the Jedi, and the birth of the Empire.

The teases for this include what appear to be some directly recreated scenes of the Jedi Council discussing “a plot to destroy the Jedi”, Ahsoka on Mandalore, and a conversation between Anakin and Padmé. 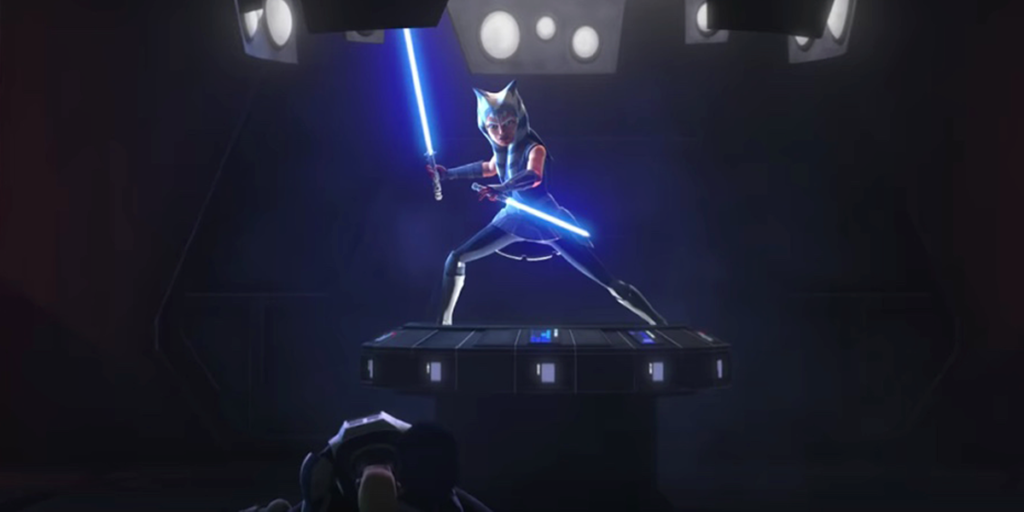 For most Clone Wars fans, Ahsoka’s story is the biggest draw for the final season of the show. Undoubtedly she is the series biggest success, and fans have already seen what happens to most of the shows other characters. The trailer puts a heavy focus on the young former Jedi and shows her arriving on Mandalore and taking on Darth Maul.

From the 2016 Ahsoka novel, we already know that Mandalore is where Ahsoka was during Order 66, and that is where she and Rex parted ways (until the events of Rebels). What wasn’t mentioned in the novel was a dramatic showdown between Ahsoka and Maul, or tearing up with Death Watch (both of which are glimpsed in the trailer) and so her arc in the seventh season will likely be one of the most intriguing. 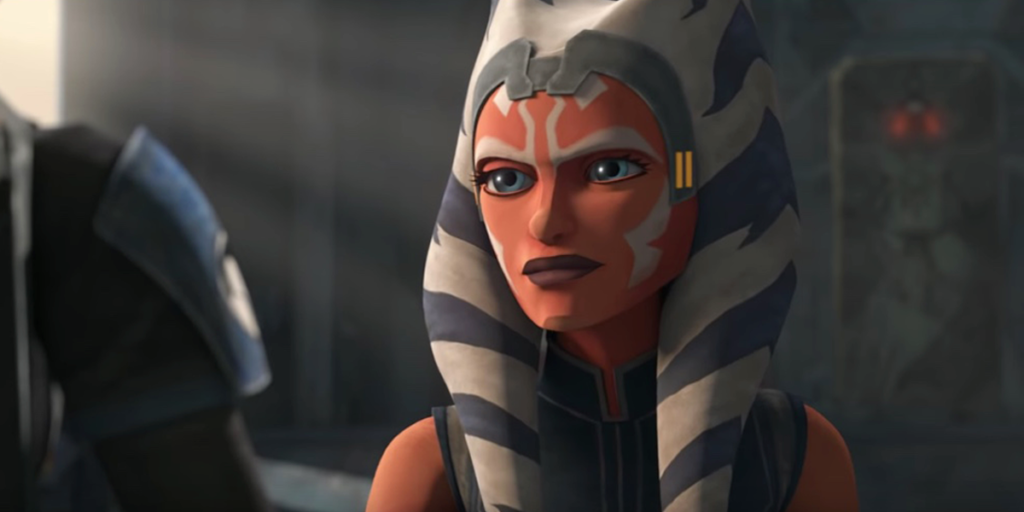 Early in the trailer is a scene where Maul uses the Force to painfully probe a Clone’s mind. It’s very reminiscent of Kylo Ren in the Force Awakens, which was the debut of this kind of Force mind reading. 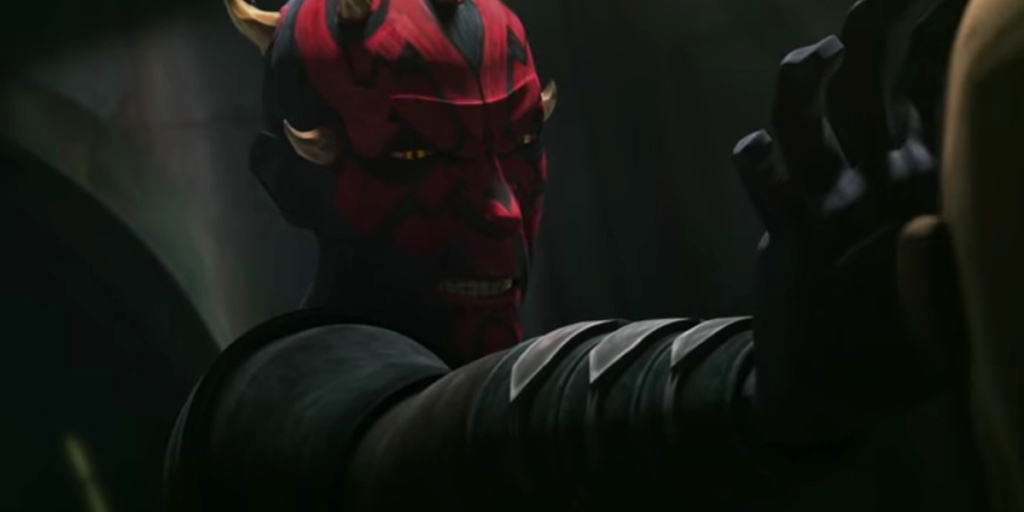 In some of the Mandalore scenes, Bo-Katan Kryze can be seen. Kryze is a Death Watch lieutenant during the Clone Wars, later leader of the Nite Owls, and eventually goes on to play a prominent role in Star Wars Rebels. In Rebels, she wields the Dark Saber and unites Mandalore. Although her eventual fate hasn’t been shown, the Mandalorian Purge is mentioned throughout the Disney + Mandalorian Show, and so likely happens after Kryze takes charge of the warrior race. In the trailer Kryze can be seen joining forces with Ahsoka, presumably teaming up with the former Jedi to liberate her planet from Darth Maul. 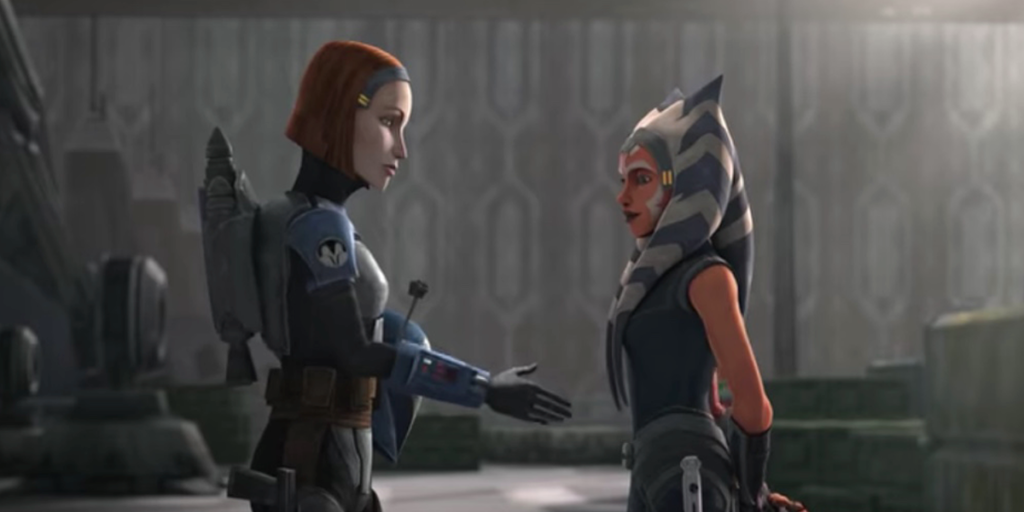 A brief shot shows Anakin talking to a hologram of Padmé, in the scene she is visibly pregnant implying this takes place after the opening of Revenge of the Sith, where Anakin first discovers he is a father to be. Much of the trailer has a foreboding sense around Anakin’s actions, seemingly showing more of his descent into the dark side. The scene appears to be even more evidence of some of the series being concurrent to Revenge of the Sith. If the scene does take place after the beginning of Episode III (but before it ends) it could even be shortly before Anakin’s attack on the Jedi Temple, when he has already been knighted as Darth Vader. 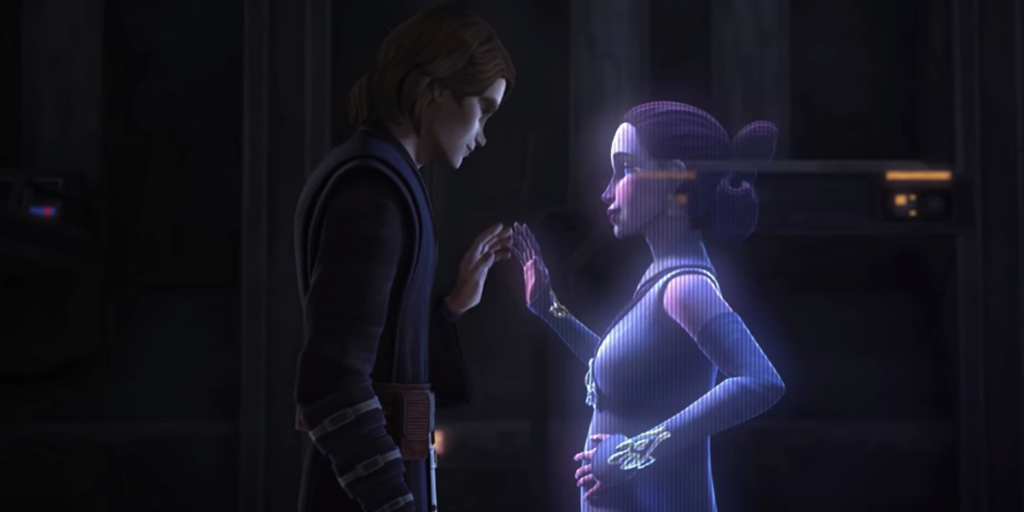 Despite being cut in half by Obi-Wan Kenobi in Episode I, Darth Maul returned in the Clone Wars and Rebels animated shows. The former Sith Lord took over a series of criminal gangs and Mandalore, all in an effort to enact revenge on Obi-Wan. He then appeared in 2018’s Solo in a very brief, unexpected, and completely unexplained cameo. Much of Maul’s planned Clone Wars arc was repurposed into the Darth Maul: Son of Dathomir comic, showing how he escaped the Emperor, which is where the Clone Wars left him.

The seventh season looks to expand on his criminal empire, setting the stage for his Solo cameo. In the trailer, his repaired lightsaber looks like a combination of his original and a new one (perhaps parts form his brother Savage Opress), which could also explain his double-ended saber in Solo. (which he doesn’t have by the time of Star Wars Rebels). 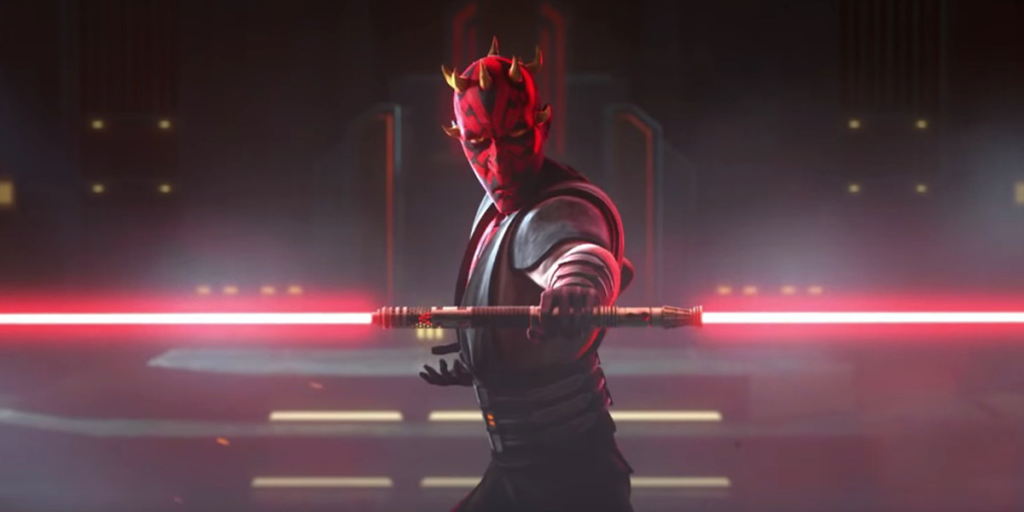 Some of the Clones glimpsed in the trailer are in an all-black customised suit of armour. More of these clones can be seen on the latest official poster for the final season. These are likely the ‘Bad Batch’ of clones that Dave Filoni has previously explained were to be a part of the final season. According to Filoni the Bad Batch is a group of Clones that have evolved past the regular Jango Fett template. 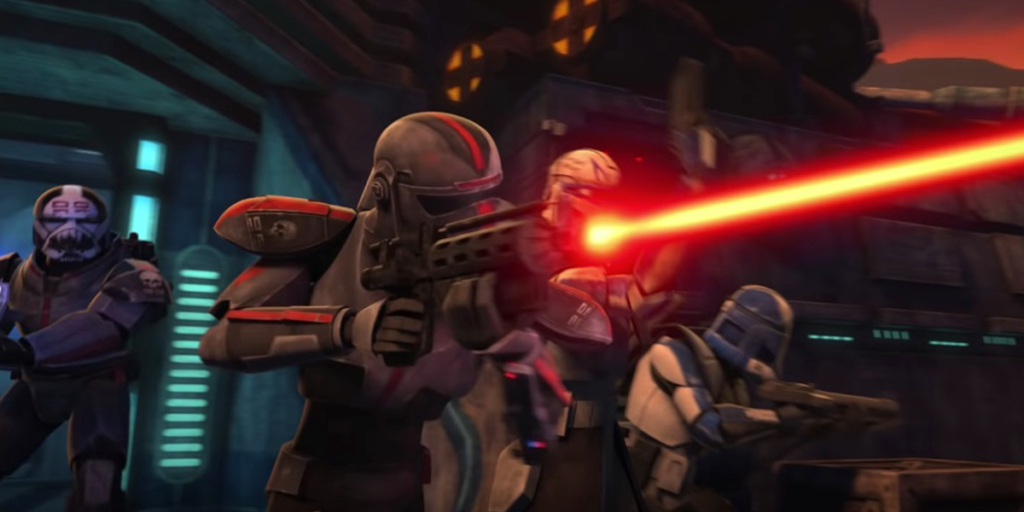 A brief shot of some Jedi discussing the fate of the Jedi shows Jedi Master Depa Billaba and what appears to be her young Padawan Caleb Dume. Caleb survives Order 66, thanks to his master’s sacrifice, and eventually changes his name to Kanan Jarrus, one of Star Wars Rebels’ main characters. According to Dave Filoni, the mind behind both Clone Wars and Rebels, although Kanan/Caleb and Ahsoka didn’t know each other they had met and trained together. The full story of Kanan/Caleb’s survival and journey into the early rebellion features in the comic book “Kanan: The Last Padawan”. 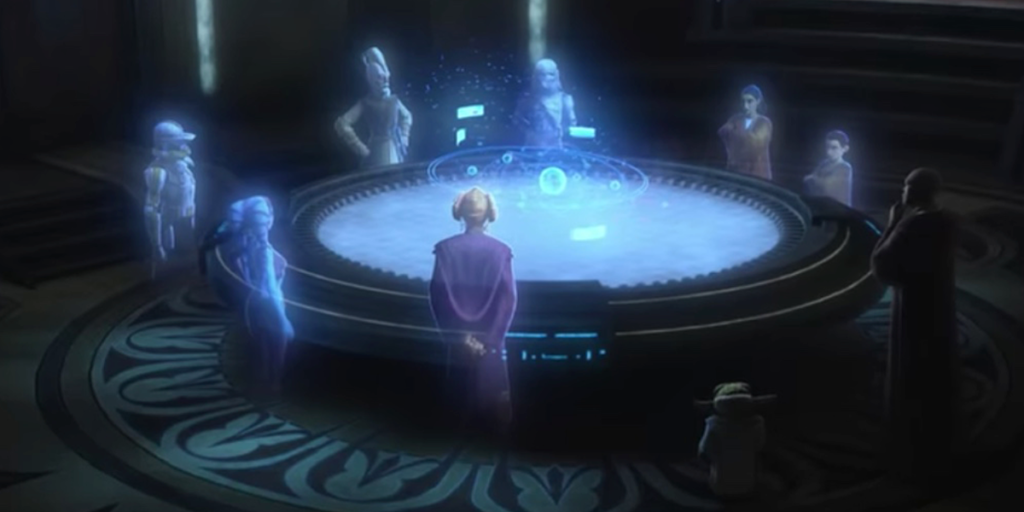 Amongst a few shots of a more villainous-looking Anakin Skywalker he seemingly confronts Admiral Trench. The spider-like Admiral first appeared in the Season 2 episode Cat and Mouse, and has survived more than his share of apparent deaths. That streak looks like it’s coming to an end as his confrontation with Anakin is likely another part of the Jedi General’s fall to the Dark Side. 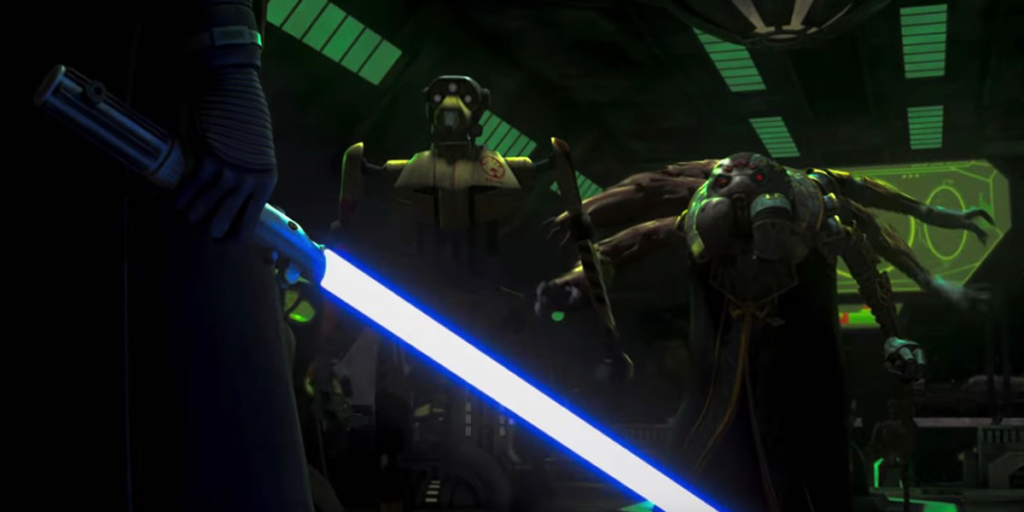 During the scene where Depa Billabe and Caleb Dune can be seen amongst other Jedi around a hologram table, Clone Commander Bly is next to Aayla Secura. Bly is a trained ARC trooper and appears throughout the Clone Wars series. He eventually turns on Secura during Order 66 and kills her, as seen in Revenge of the Sith. 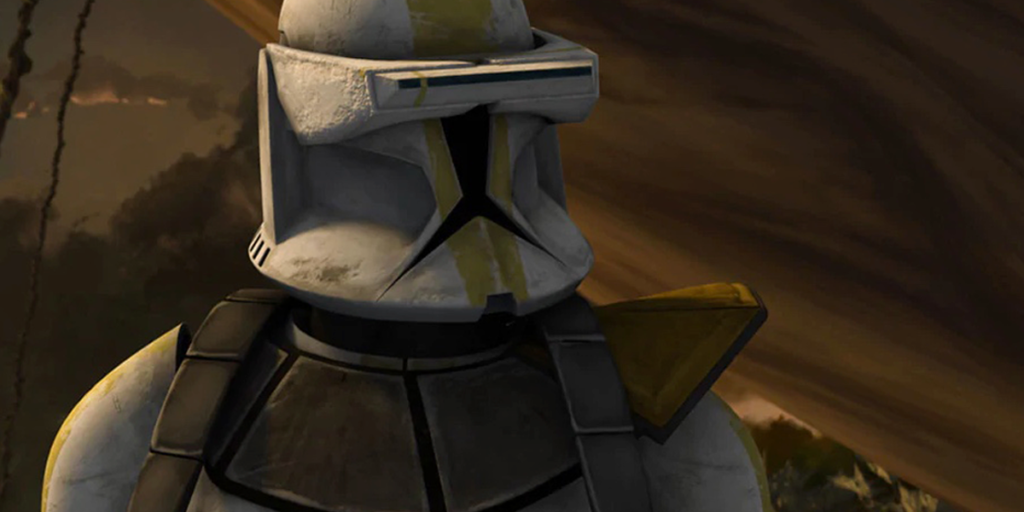 Also at the Jedi hologram table is Commander Bacara, who has a rather distinctive helmet. Bacara’s Clone Trooper designation is CC-1138, a reference to George Lucas’s first film THX 1138. The seventh season of the Clone Wars is Bacara’s first appearance in the series, and his only one since Revenge of the Sith, where he leads Ki-Adi-Mundi’s execution. 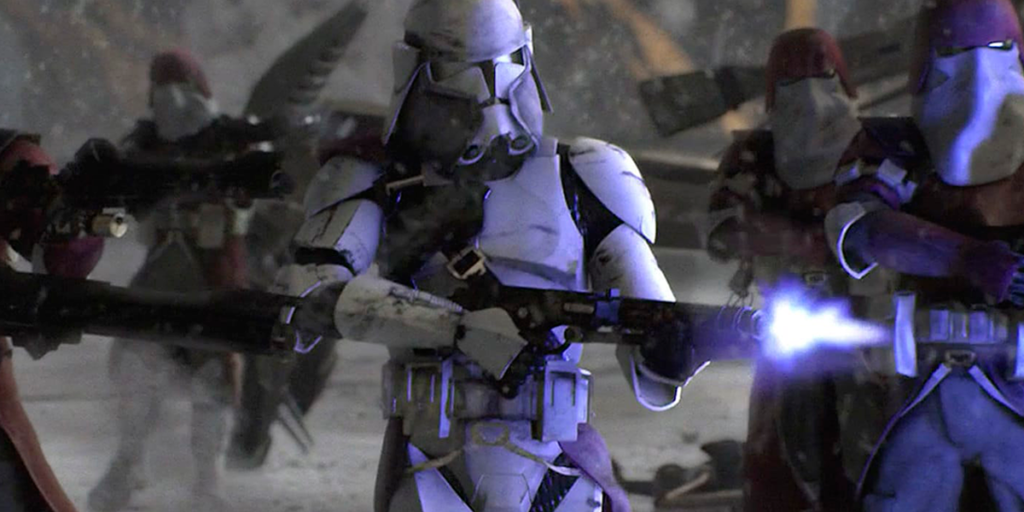 Although no longer a Jedi, it looks as though Ahsoka is given command over a squadron of Clone Troopers whilst trying to take back Mandalore. This could perhaps lead to some question in her confidence as a leader, which the Clones look to have responded to by painting their helmets to match the pattern and colours of Ahsoka’s Tendrils. 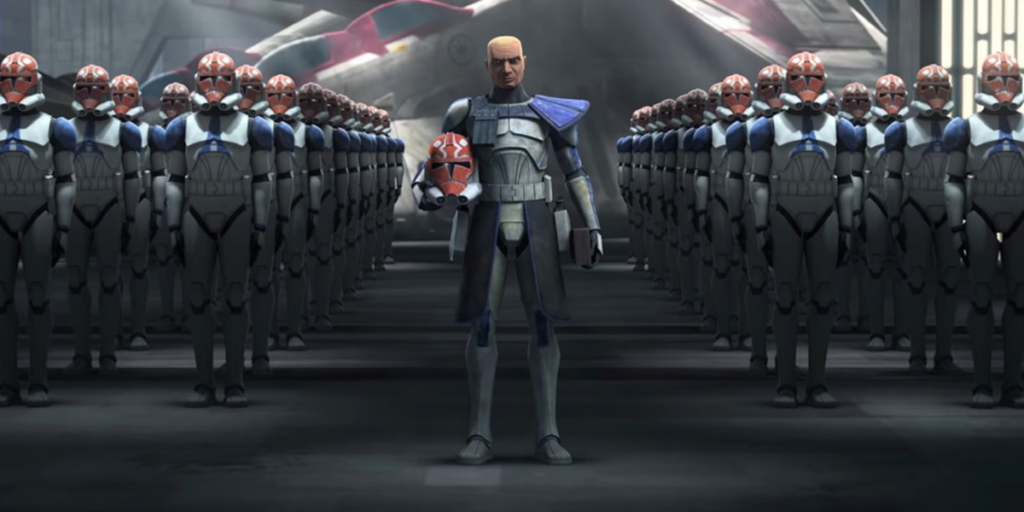 For more Star Wars check out our Easter Eggs Post for The Mandalorian and The Rise of Skywalker, or our video on How Star Wars Jedi Fallen Order Shows There is More to the Force than Just Light and Dark.