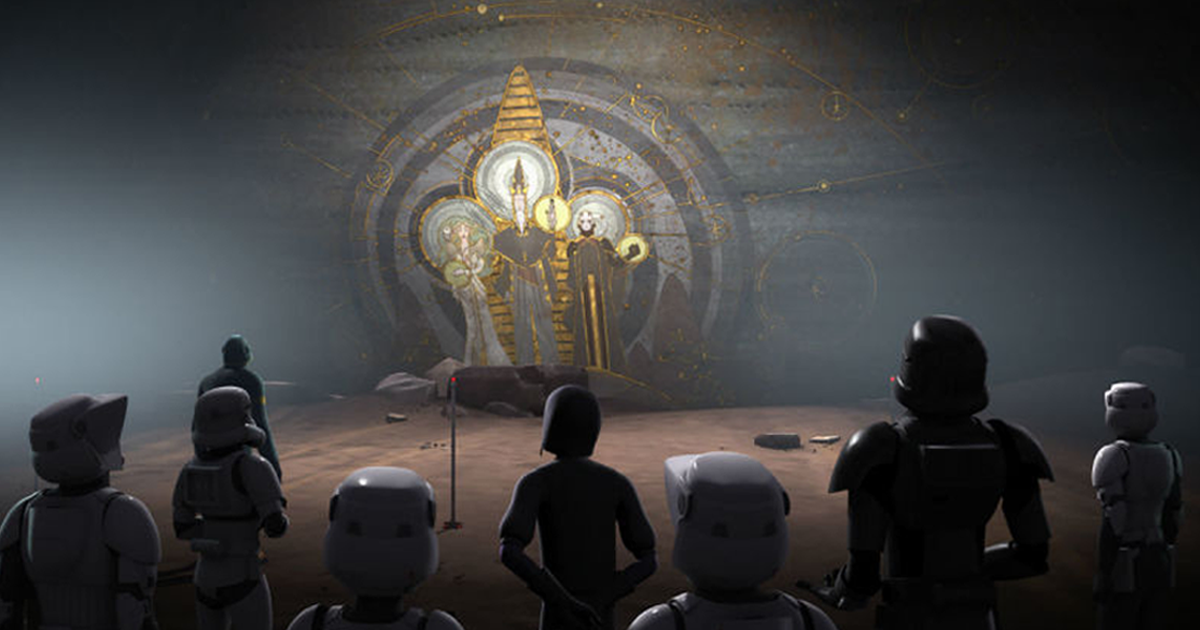 Star Wars Rebels: All the voices Ezra Hears in the World Between Worlds

In the last few months alone Star Wars as a franchise has been totally upended and altered, and between the Last Jedi and recent episodes of Star Wars Rebels we’ve seen the Force do a number of things we’ve never seen before. In Star Wars Rebels’ penultimate episodes we learn a lot of new information about the Force, with the key revelation being that it exists outside of time and space, and can facilitate actual time travel. 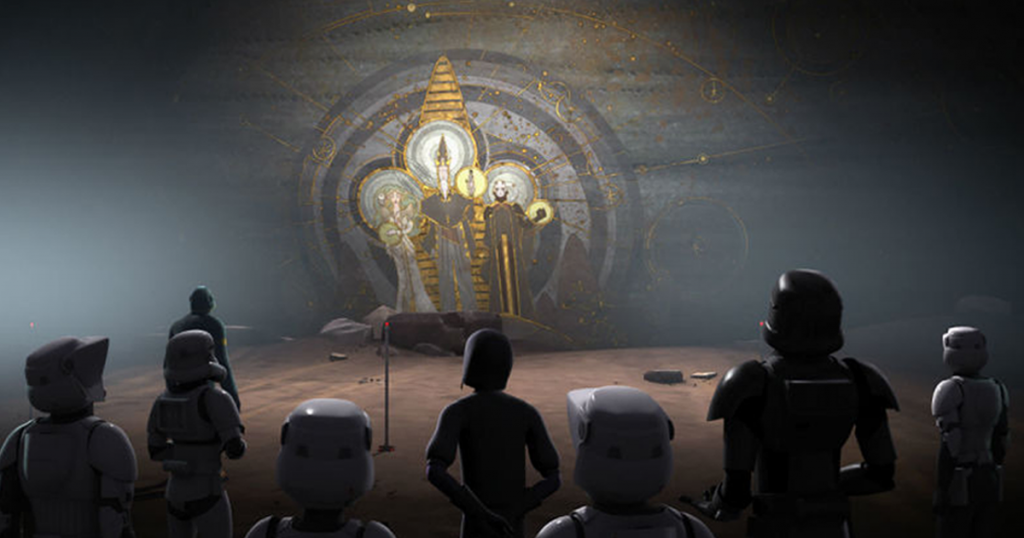 The episode is quick to make it clear only very special force users can access the place known as ‘the world between worlds’ and also makes a clear point to destroy the Jedi temple on Lothal (through which Ezra accesses the portal). But before the temple is destroyed we get a number of hugely important scenes. The story really starts to dig deep into the Star Wars mythology pretty much as soon as the second episode begins. We see a scene in which Ezra actively hears (rather than them simply being played as some sort of narration) a number of important Star Wars quotes from across all eras of the franchise (here is a list of all, or at least most, of them).

As soon ‘A World Between Worlds’ begins we start to hear a number of familiar characters echoing equally familiar lines, the first load of which start as early as Attack of the Clones and continue on to include a number of the movies, the Clone Wars animates series, and Rebels itself:

“Truly wonderful the mind of a child is”

– Yoda speaking to Obi-Wan in Attack of the Clones.

“What is this place?” “A conduit through which the entire Force of the universe flows”

– Obi-Wan and Qui-Gon in Star Wars: The Clone Wars, “Overlords”.

– Yoda talking to Luke in The Empire Strikes Back.

“Just when you think you understand the force, you find out how little you actually know”

– Ashoka to Ezra in Star Wars Rebels, The Mystery of Chopper Base.

“Train yourself to let go of everything you fear to lose…”

– Yoda speaking to Anakin in Revenge of the Sith.

“What you need, you already have. Unfortunately, you seem to be letting it all go.”

– Kanan to Yoda in Star Wars Rebels, Path of the Jedi.

“The Force is what gives a Jedi his power. It’s an energy field created by all living things. It surrounds us and penetrates us. It binds the galaxy together.” 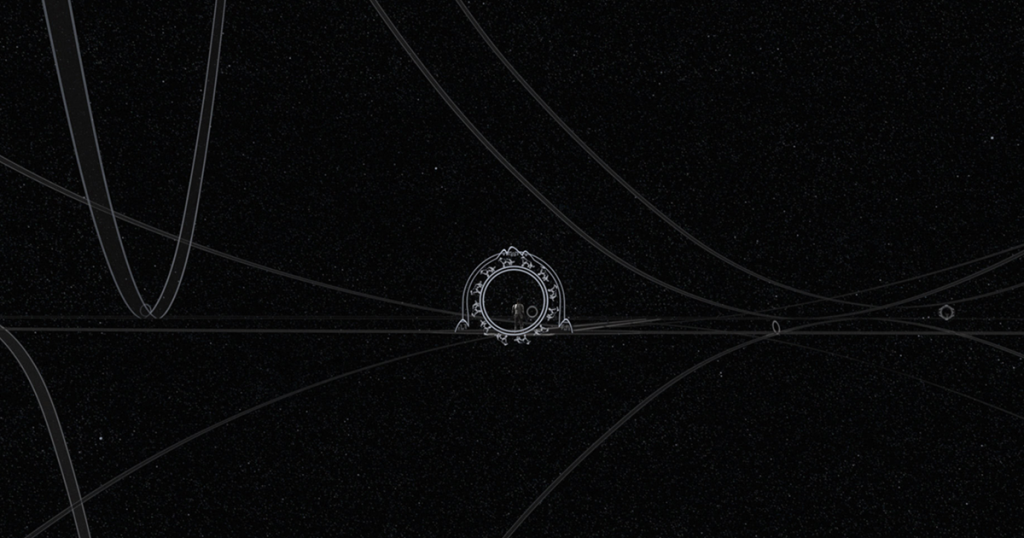 After this first glimpse of important moments throughout the Star Wars franchise, all of which seem to focus on the Force itself, Ezra starts to follow the path he is on. Pretty soon after the first set, we get another section of quotes, these shift from the earlier movies to also include dialogue from Rogue One, and the Force Awakens. Although this batch of quotes is a lot more overlapped and harder to work out (often being only small parts of a full line), the focus is clearly more centred on change, resistance and rebellion, leading up to the big reveal of the episode:

“Death is a natural part of life. Rejoice for those around you who transform into the Force. Mourn them do not. Miss them do not. Attachment leads to jealously. The shadow of greed, that is.”

– Yoda speaking to Anakin in Revenge of the Sith

“Dear child. I see your eyes. You already know the truth. Whomever you’re waiting for on Jakku, they’re never coming back, but, there’s someone who still could. The belonging you seek is not behind you… it is ahead.”

– Maz Kanata after meeting to Rey in The Force Awakens

“I am one with the Force, and the Force is with me”

– Chirrut Îmwe (repeatedly) in Rogue One.

“The time to fight is now!”

– Jyn Erso rallying the Rebellion in Rogue One.

“We’ll see each other again. I believe that.”

– Rey to Finn in The Force Awakens.

“Forgive me. I feel it again… The pull to the light… Supreme Leader senses it. Show me again… The power of the darkness… And I’ll let nothing stand in our way… Show me… Grandfather… and I will finish… what you started.”

“The Resistance will not be intimidated by you.”

– Poe Dameron as he is captured by Kylo Ren in The Force Awakens.

“This is our most desperate hour. Help me, Obi-Wan Kenobi. You’re my only hope.”

And then after the Convor hoots, leading Ezra to a specific doorway;

“You’re reckless little one. You never would have made it as Obi-Wan’s Padawan, but you might make it as mine.”

– Anakin accepting Ashoka as his Padawan in the Clone Wars movie. 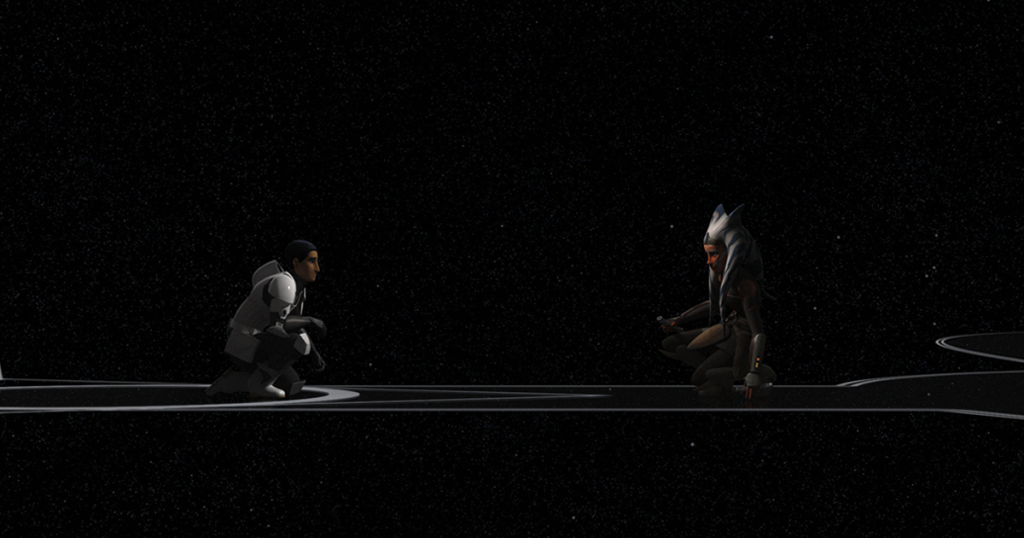 After this we of course get the huge, franchise altering, reveal that Ezra (through the Force) reaches back in time and saves Ashoka. Whilst Ezra catches Ashoka up on what’s happened in the two years she has been missing, eventually leading to the two realising their final lesson is to accept that their master’s are lost, we hear a few more quotes:

“Obi-Wan has taught you well” (as Ezra names Vader)

– Darth Vader to Luke in Return of the Jedi.

“You don’t know the power of the Dark Side”

– Darth Vader to Luke in Empire Strikes Back.

“I am the daughter” (as Ezra repeats the name Morai, that Ashoka gives to the covor)

“You can learn what it truly means to be a Jedi.”

“Kid, I’m about to let everyone in on the secret.”

– Kanan to Ezra in Star Wars Rebels, Spark of the Rebellion (Part 2).

“I survived one war; I’m not ready for another one.”

– Kanan to Hera in Star Wars Rebels, The Siege of Lothal.

– Kanan to Ezra on Rex and the Clone War in Star Wars Rebels, The Last Battle 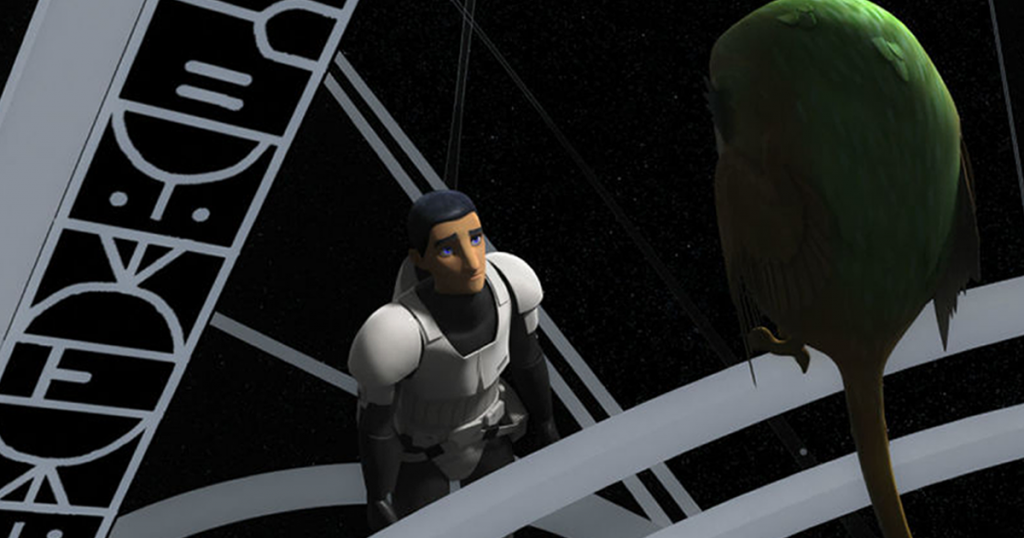 The two part story of ‘Wolves and a Door’ and ‘A World Between Worlds’ is not only hugely impactful in terms of Rebels, or even characters like Ashoka (who has played a prominent role in both Clone Wars and Rebels), but the Star Wars franchise as a whole. The episodes showed us a number of new things that we’ve never seen the Force do before, the biggest of which being actual time travel. How this affects Star Wars going forward is yet to be seen.