In Shazam’s Best Easter Eggs, References, and Cameos we’re taking a look at 2019’s Shazam! Which is packed full of references to the comics, the rest of DC’s on-screen universe, and some hints at what the future of Shazam! could look like. 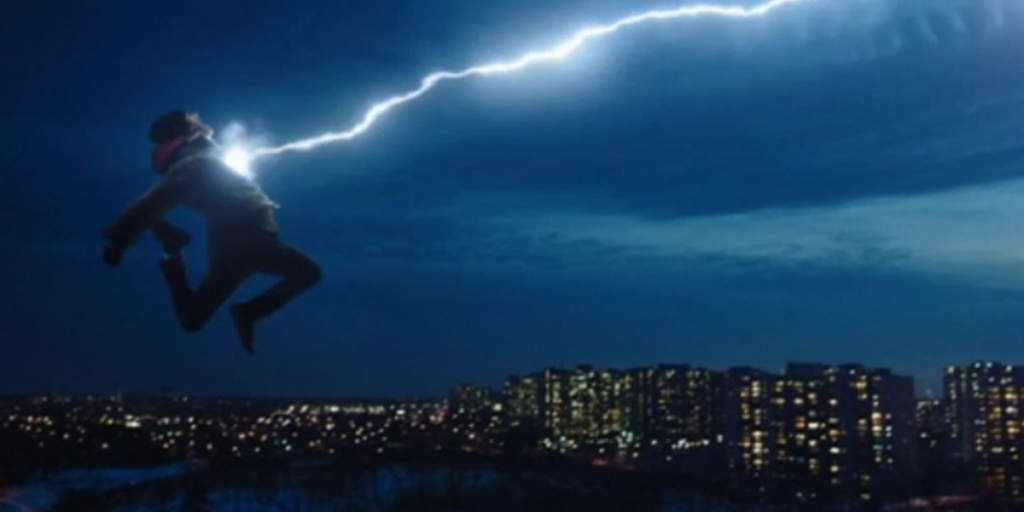 The prologue that shows Thaddeus Sivana’s first interaction with the wizard Shazam at the Rock of Eternity is set in 1974. In the real world, 1974 is the year the original live-action Shazam! tv show, starring Michael Gray as Billy Batson, debuted. 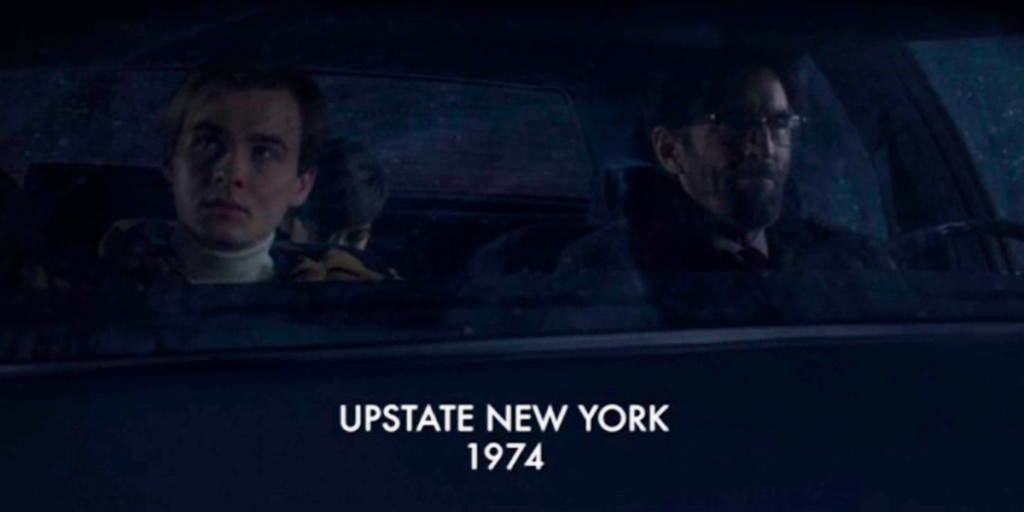 John Glover’s role as Mr Sivana, Thaddeus’ father, is one of several significant DC characters the actor has played. He was the Riddler in Batman: The Animated Series, Dr Jason Woodrue, the man who created Poison Ivy, in 1997’s Batman and Robin, and Lionel Luthor the father of Lex in Smallville. 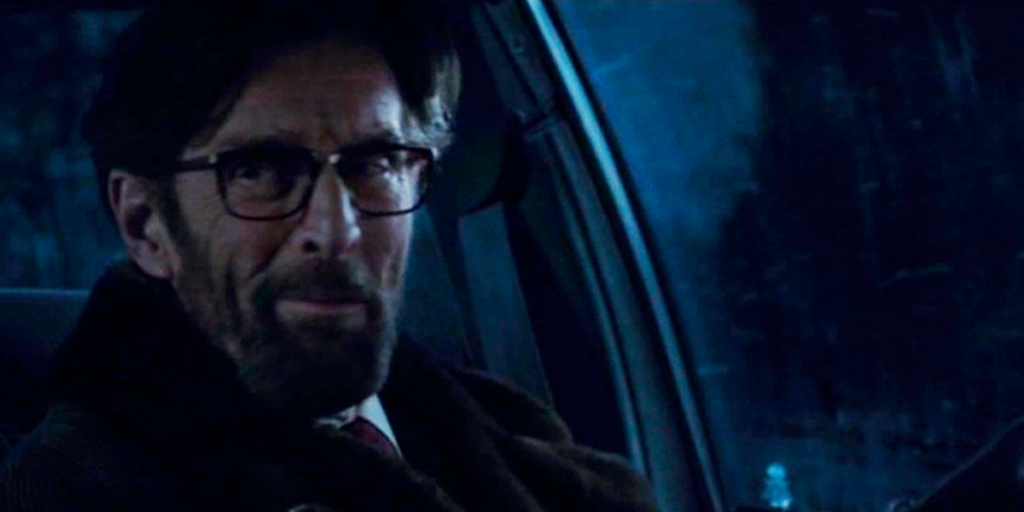 Billy Batson’s first line in the movie is “holy moley”, which was the original comic version of Billy’s catchphrase. He first said it in Special Edition comics #1. 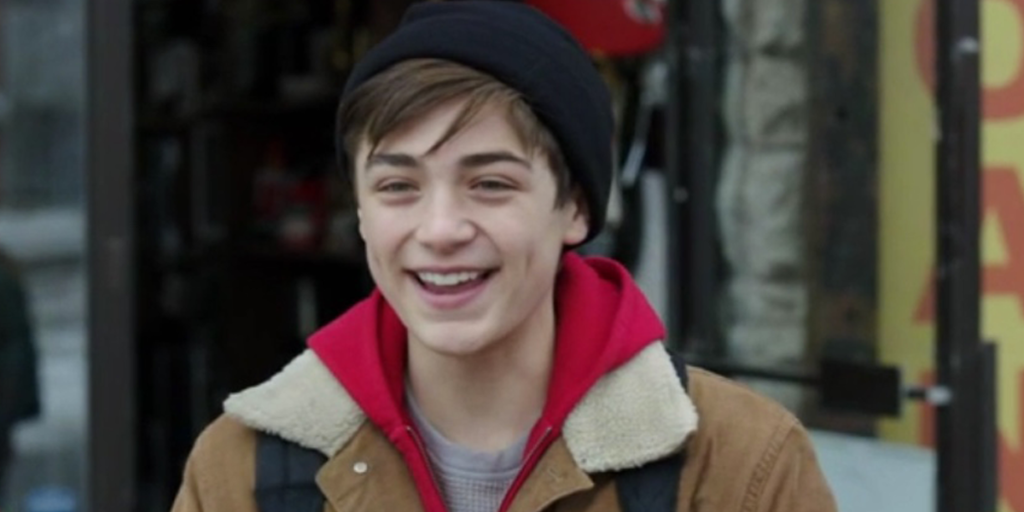 As a nod to Director David F. Sandberg’s past directorial efforts with the horror movie Annabelle: Creation and James Wan, who directed DC’s Aquaman and The Conjuring. An Annabelle doll  (which features in the Conjuring and it’s ‘Annabelle’ centric spin-offs) can be seen in the pawnshop near the beginning of the film. 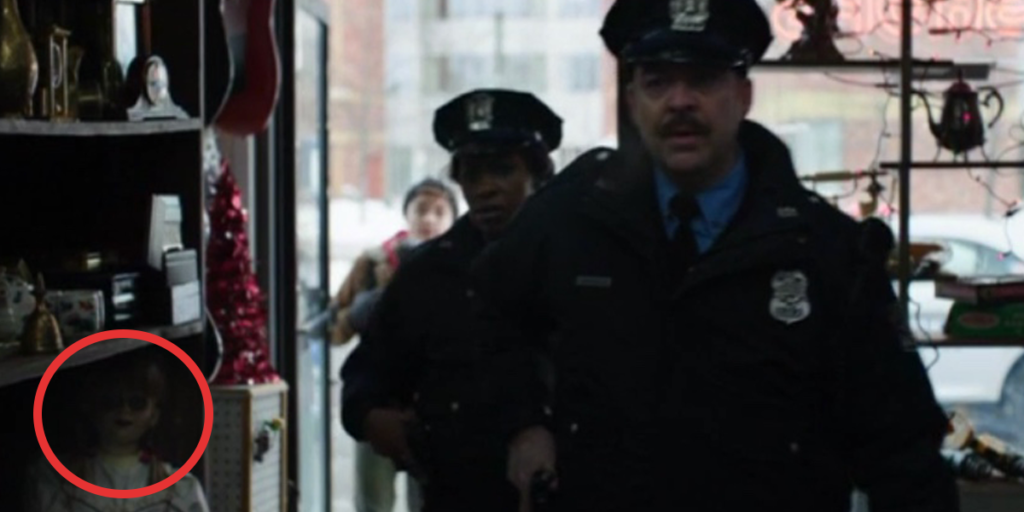 When Billy is being told he will be moving in with the Vasquez family, several bright yellow smiley face badges can be seen on the desk. This is a reference to DC’s Watchmen and the Comedian’s badge. 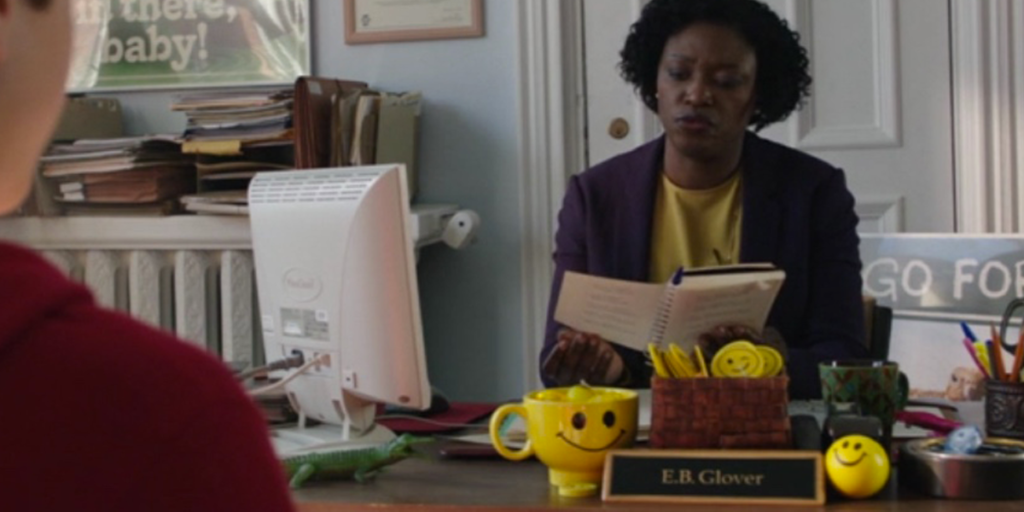 The Time Magazine cover that is part of Freddie’s collection shows the Kryptonian World Engine from Man of Steel. This firmly places Shazam! Within the DCEU and gives some insight into how the regular world is reacting the debut of Superman, alien attacks, and superheroes saving the day. 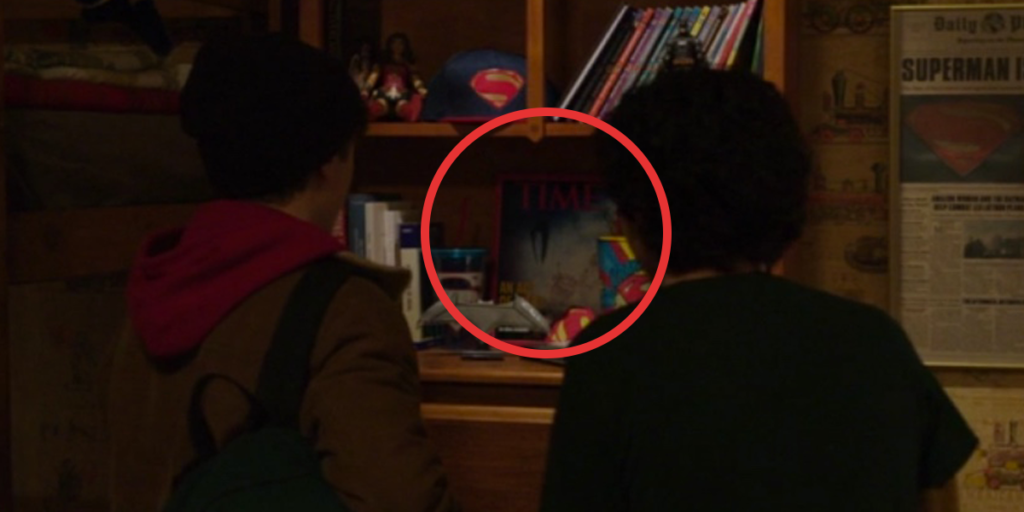 The Bullet and Batarang

Freddie owns an authenticated bullet that apparently ricocheted from Superman, and one of Batman’s Batarangs. Both play a role in the movie as Billy steals the bullet, intending to sell it, and the Batarang helps out the Shazam! family in the final battle against Sivana. The Batarang is the same style used by Ben Affleck’s Batman in Batman vs. Superman: Dawn of Justice and Justice League. 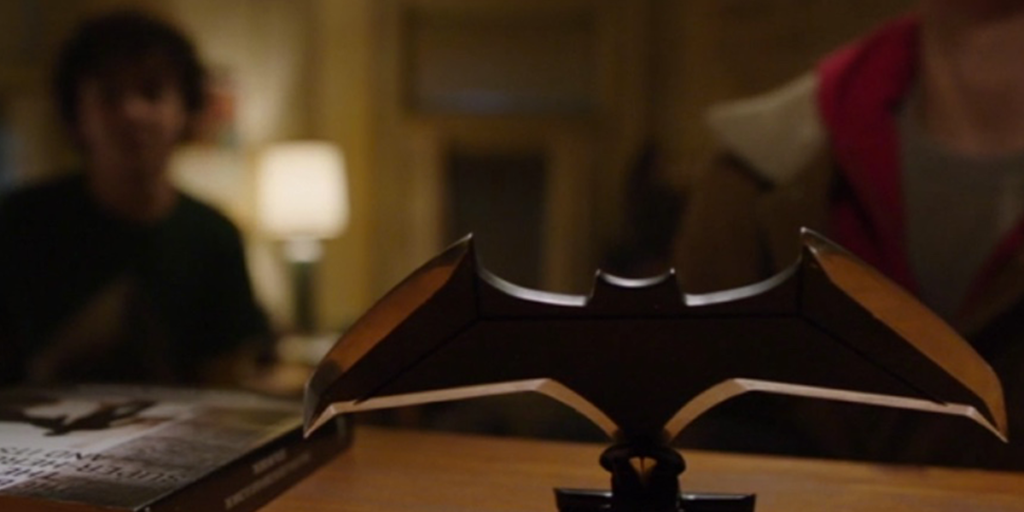 Although a fully established part of the DC Universe now, the Shazam family was originally created by Fawcett Comics. DC eventually sued Fawcett for similarities between the character of Captain Marvel and DC’s Superman, only to license and then outright buy the character years later (renaming him Shazam!). Fawcett comics gets a nod in the high school the children attend, “Fawcett Central”. 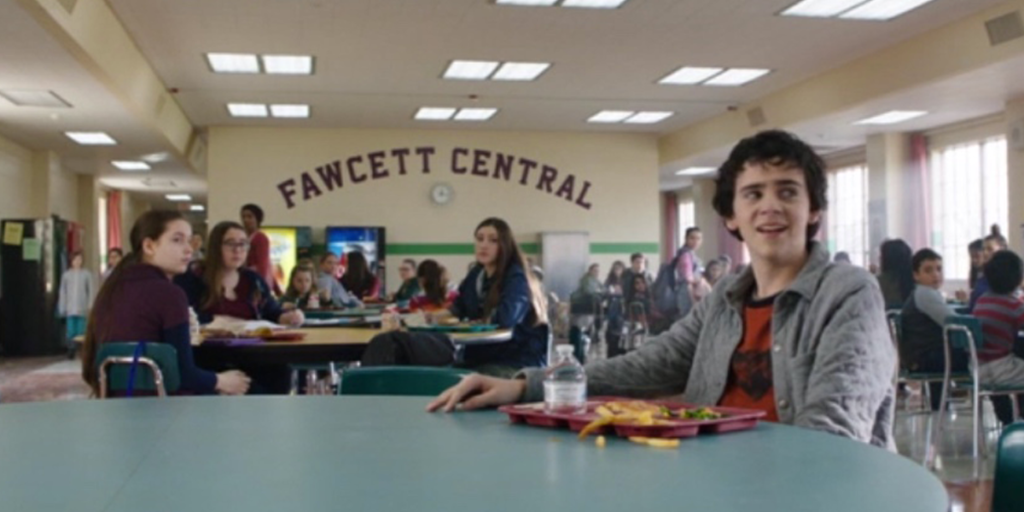 Inside the Rock of Eternity, a magic mirror known as the Mirror of Francesca can be seen. The mirror is straight out of the original comics and was often used to give Shazam guidance. 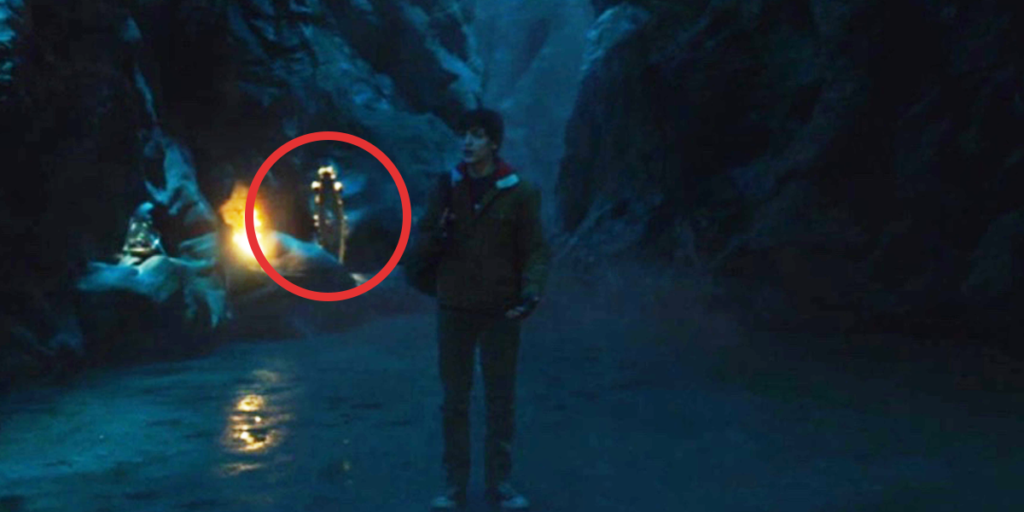 When the wizard Shazam explains his powers to Billy, he mentions that another once held the power, but used it for evil. The explanation is accompanied by a magical recreation that teases the Shazam! villain Black Adam, who will be played by Dwayne “The Rock” Johnson in an upcoming film. 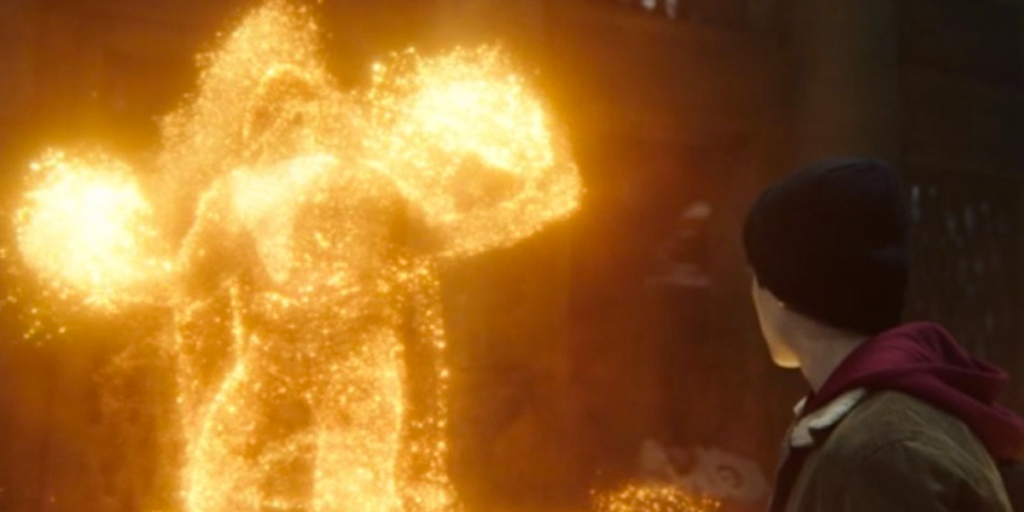 Even further emphasis that the heroes of the DCEU have taken over the world’s merchandise is that several superhero logos can be seen on clothing throughout the movie. Primarily on Freddie, the logos we see include Batman, Aquaman, and Wonder Woman. 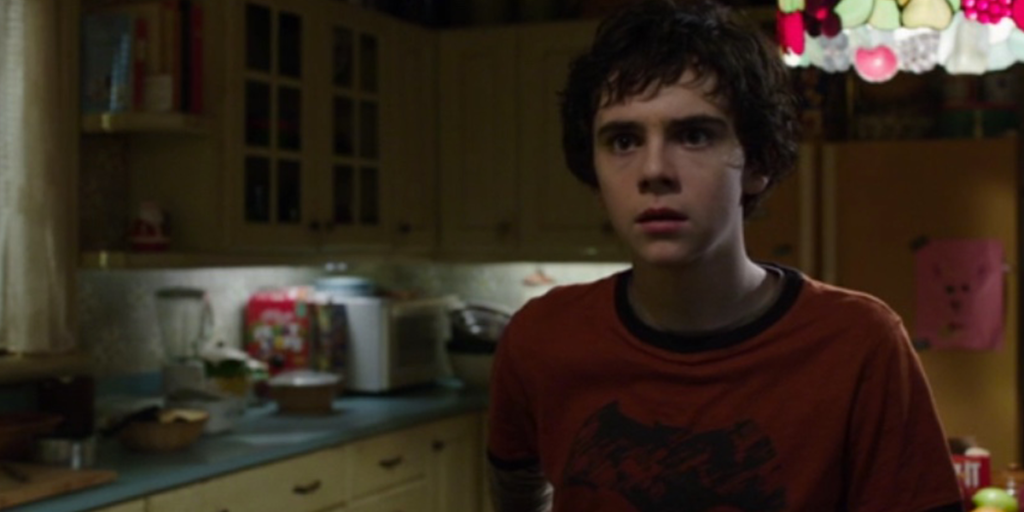 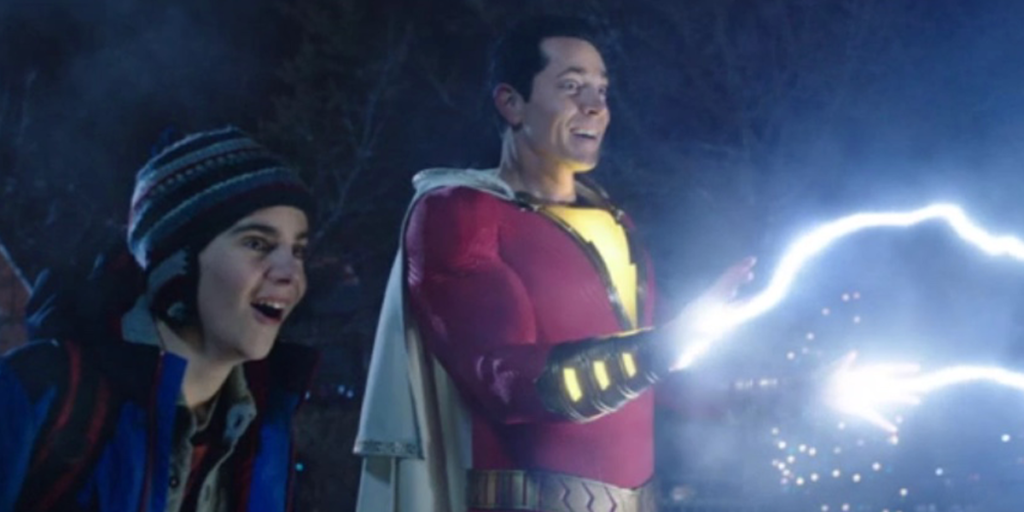 Whilst testing his powers Billy attempts to fly on a heavily graffitied skate ramp. On the (screen) right-hand side ‘Arione’ can be seen. Although the addition of the ‘e’ at the end throws off the easter egg a little, it is a clear nod to DC comics character ‘Arion’. It even has a star in the middle of the ‘o’ just like the comic book logo. 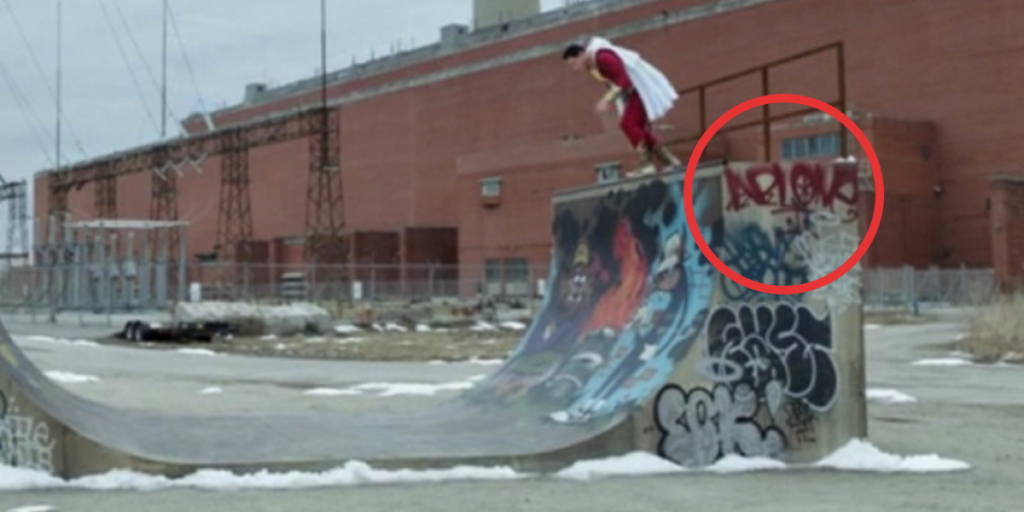 Freddie and Billy test out Billy’s new Shazam powers inside an Ace Chemicals building. Ace chemicals is an iconic DC Comics company, most prominently known as the (metaphorical) birthplace of the Joker and Harley Quinn. The company has appeared in Batman vs. Superman, Suicide Squad and Birds of Prey. Director David F. Sandberg explains in the Shazam!’s audio commentary that the warehouse used for the scenes was also the same building used as Ace Chemicals in 2016’s Suicide Squad, which gives an extra real-world reason for the easter egg. 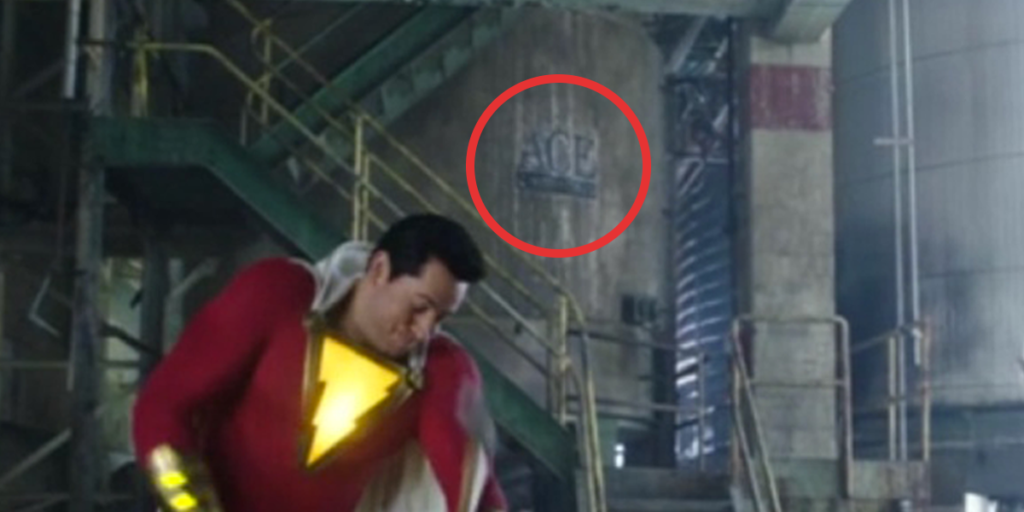 Most of Shazam! takes place in the US city of Philadelphia. One of the most famous movies to take place in the city is Rocky, and so it’s fitting that Shazam! has a big Rocky reference. Whilst Billy shows off for money he is playing “Eye of the Tiger”, whilst at the top of the stairs outside of the Philadelphia Museum of Art, homaging the scene where Rocky does the same, with Eye of the Tiger hitting the nod home. 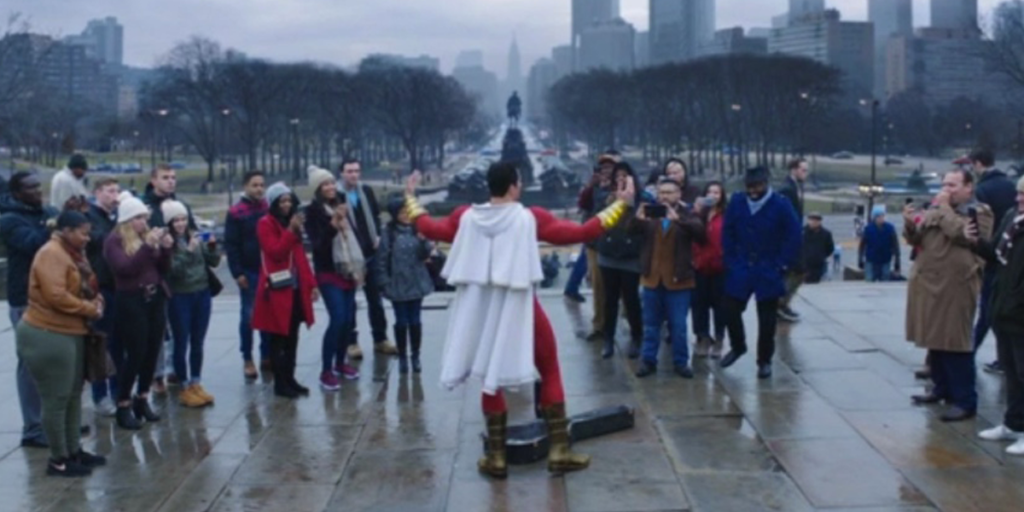 Whilst Shazam and Sivana fight in the shopping mall they end up in a toy store that is filled with real-world DC Comics toys. Figures of Batman, Superman, Wonder Woman and Cyborg can be seen, showing that in the DCEU the heroes are pop-culture icons, just like in the real world. 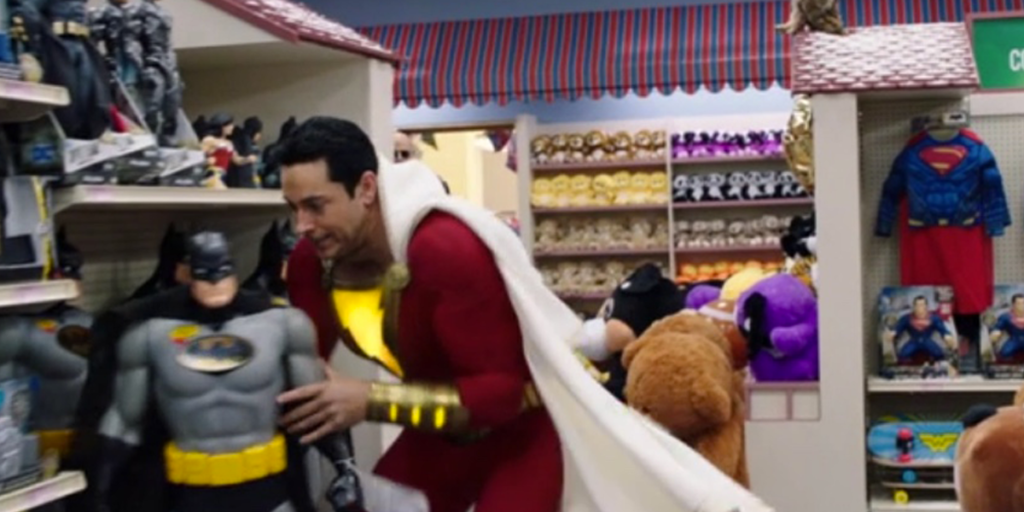 Shazam shares a lot of similarities with Penny Marshall’s ‘Big’. The 1988 movie stars Tom Hanks as a young boy who finds himself in the body of a fully grown man after making a wish at a carnival. Shazam references Big when Billy runs across a giant floor piano in the toy store, homaging one of Big’s most iconic scenes. 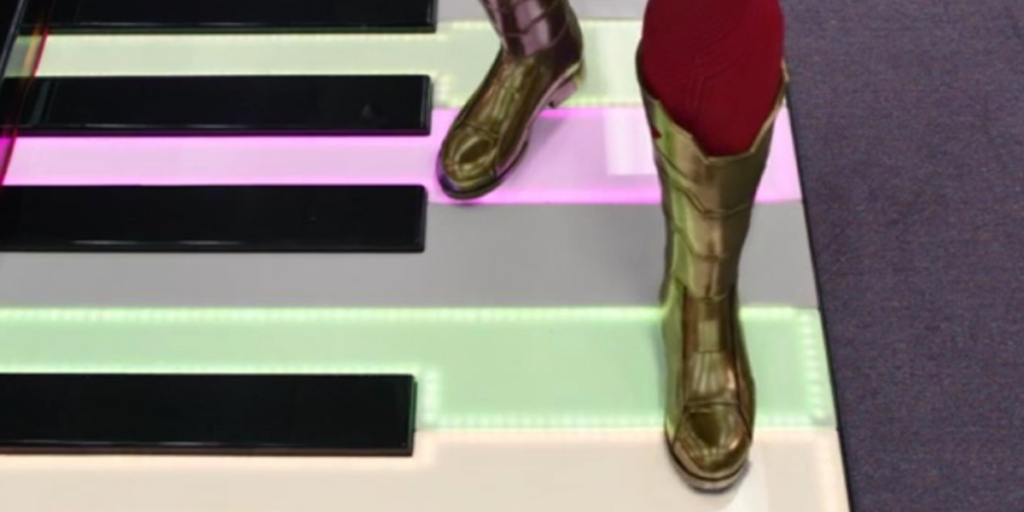 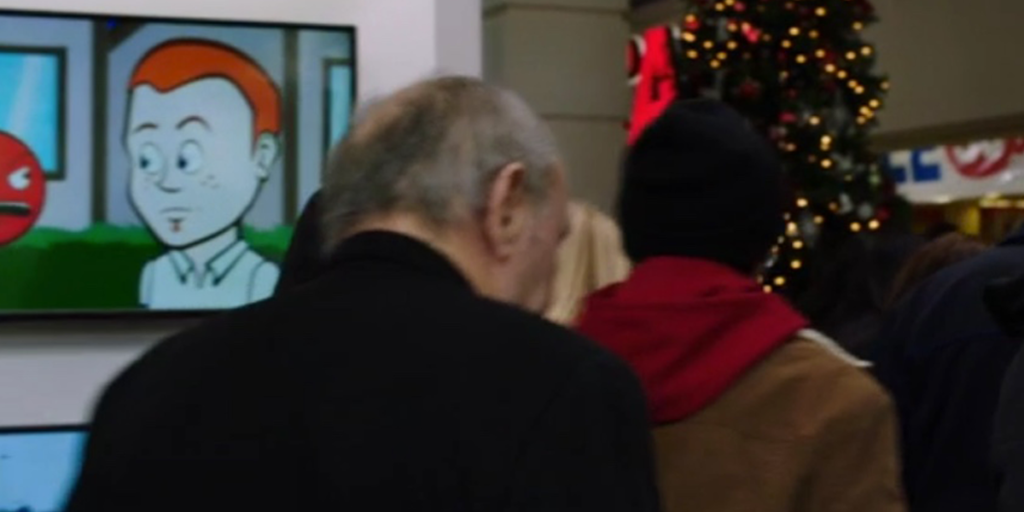 The TV channel that shows up throughout the movie is the Galaxy Broadcasting System, a DC comics tv network that first appeared in 1970’s Superman’s Pal Jimmy Olsen Vol #133. 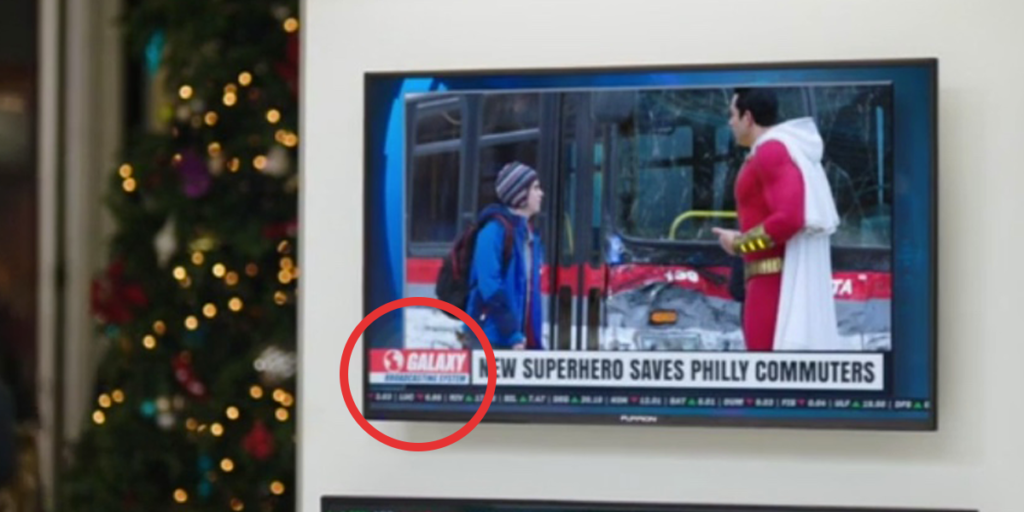 In amongst Freddie’s superhero collection are several references to Superman, Batman and the past events of the DCEU, but of one the more subtle nods to DC’s past is a newspaper headline next to Billy’s bed. The title reads “CAPED WONDER STUNS CITY”, which is the exact headline when Superman first appears in 1978’s Superman from Richard Donner, starring Christopher Reeve. 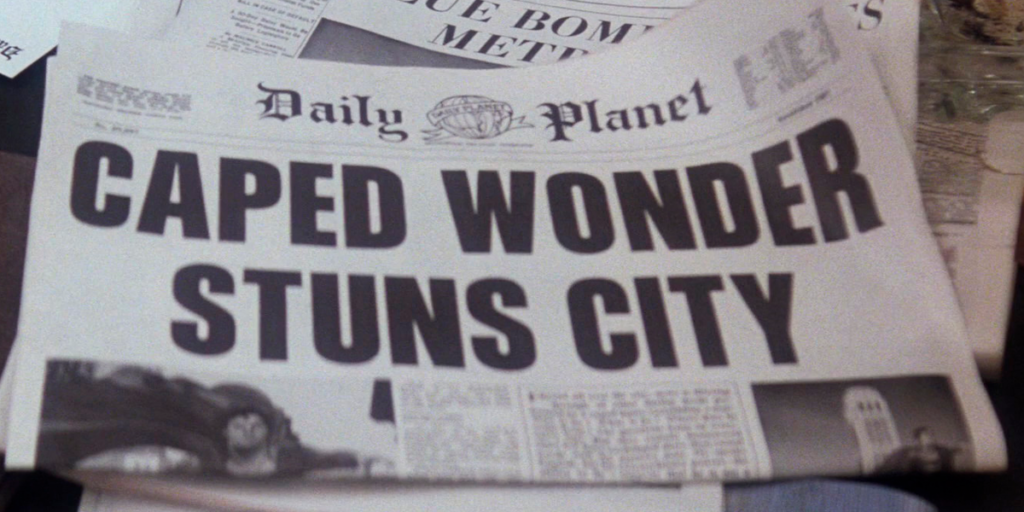 When Billy discovers his parent’s identity, he sees his father was named C.C. Batson. This is his father’s name from the comics, which was taken from the original artist behind Shazam C.C. Beck. Beck co-created the then Captain Marvel with writer Bill Parker. 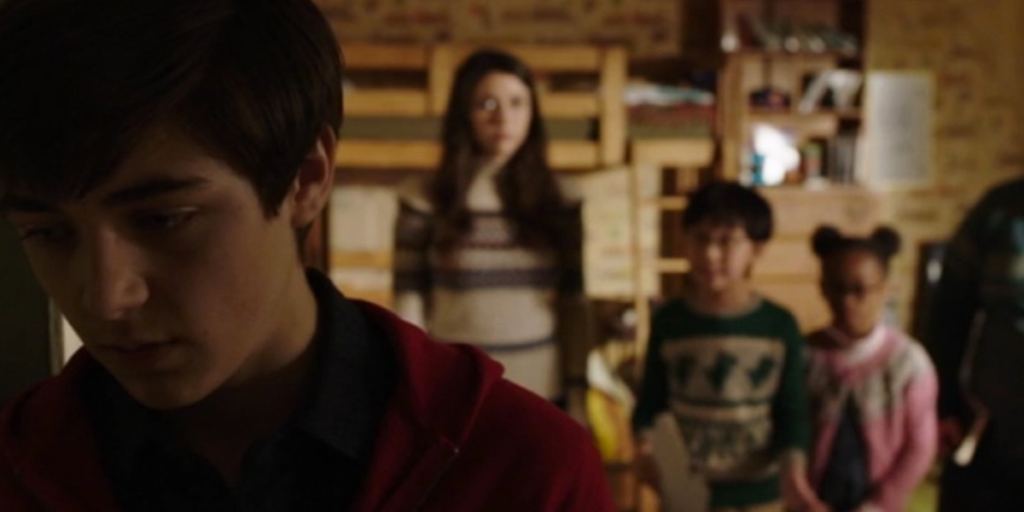 As Billy rushes to save the Vasquez family from Dr Sivana after a disappointing reunion with his mother, he recreates the cover of Frank Miller’s Dark Knight Returns #1 from 1986.

As the family tries to escape the Rock of Eternity one of the doors they open is on to three Crocodile men playing cards. All three of the Crocodile men were played by Shazam! director David F. Sandberg, and are a reference to one of Shazam!’s classic villains, first appearing in Captain Marvel Adventures #31. 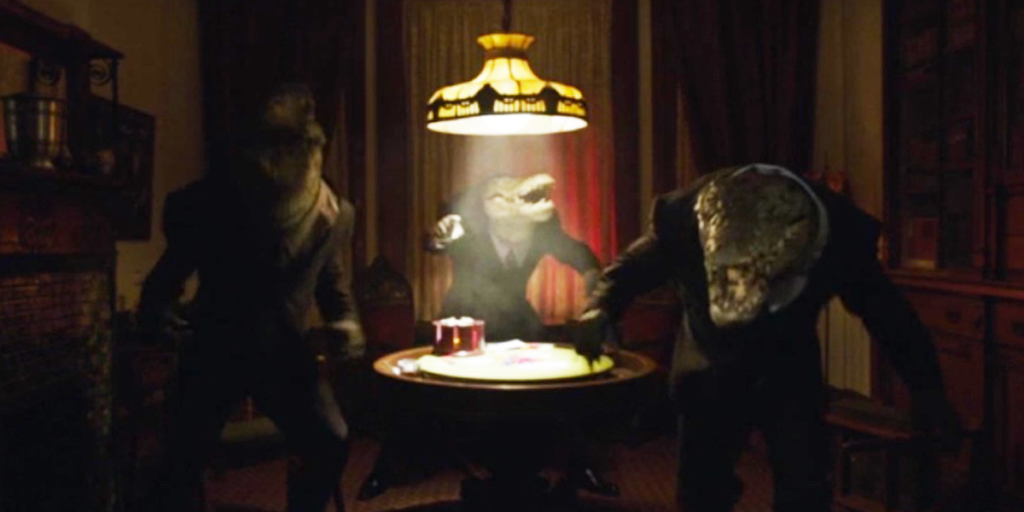 In the comics, Tawky Tawny is a talking Tiger that has appeared in various incarnations since his debut in 1947. Originally Tawny was simply a talking Tiger who travelled to America from India, but in later versions, he was a stuffed toy who came to life.

The stuffed toy version of Tawny gets a nod as Billy hands a frightened girl a stuffed Tiger, as young billy asks his Mom for a toy, in the toy store, and through the circular burtons that keep the Shazam suit’s cape in place. billy also has a tiger patch on his bag. 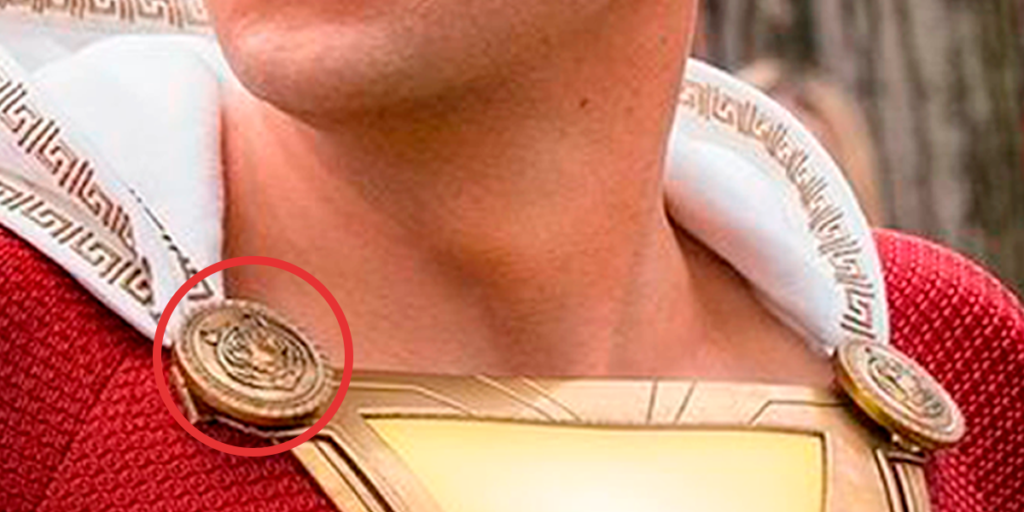 When Shazam fails to show up at lunch, he also fails to prove to Freddie’s schoolmates that he and the superhero are friends as he claimed. Freddie is bullied even more than usual as a result. The payoff to this falling out between Freddie and Billy comes in the final scene of Shazam! Now a fully established superhero Billy invites a fellow hero to lunch with Freddy. To the cafeteria’s shock, Superman arrives (with his own lunch tray).

Making the moment extra special is the use of John Williams’ classic theme from the 1978 Superman. Although Henry Cavill was interested in reprising his role, he couldn’t fit in the scene with his schedule. So Zachary Levi’s stunt double wore the suit instead. 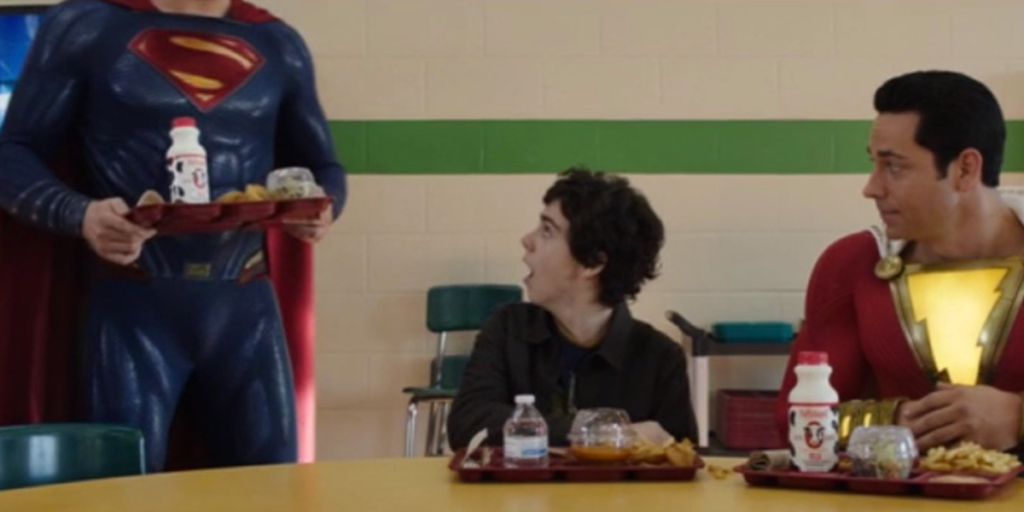 The mid-credits scene reveals the infamous Shazam villain and alien worm, Mister Mind, has escaped captivity on the Rock of Eternity. The glass case holding the worm can be seen destroyed when Billy first arrives to receive his powers. In another director cameo, Mister Mind is voiced by David F. Sandberg. 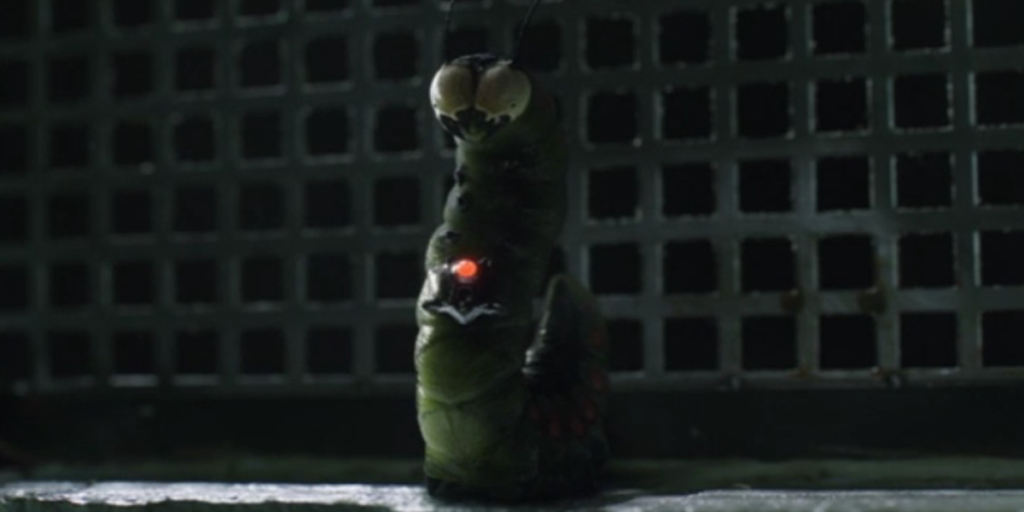 If you’ve enjoyed our post on Shazam’s Best Easter Eggs, References, and Cameos, don’t forget to check out our YouTube Channel and our other Easter Eggs videos. 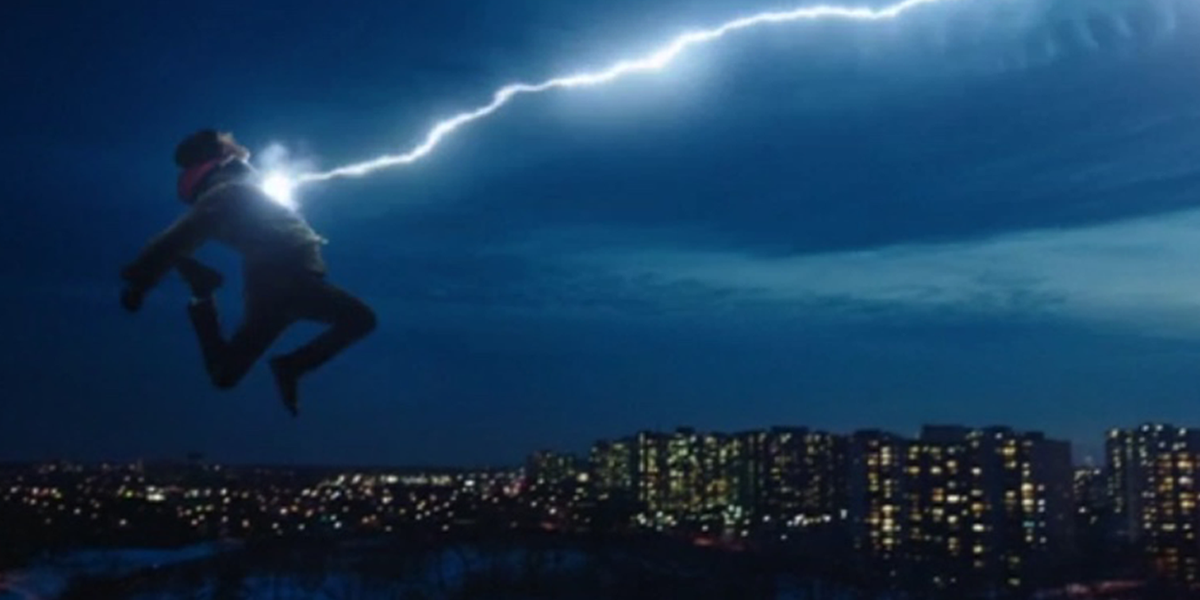 February 21, 2020
Previous articleHow Birds of Prey Connects to the Wider DCEU
Next articleThe Making of Disney’s The Little Mermaid