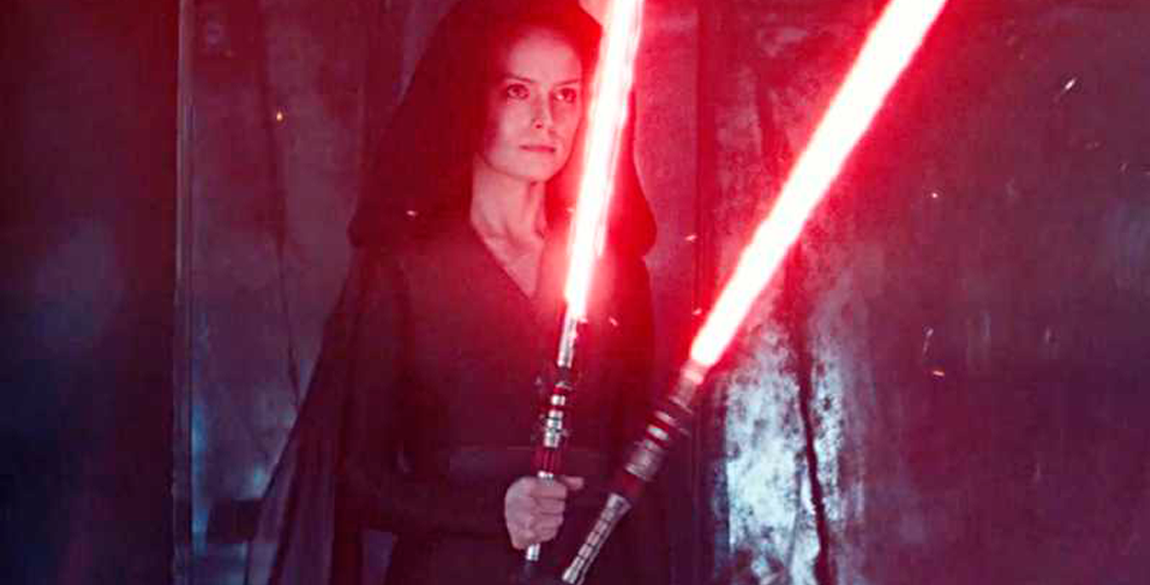 The original Star Wars trilogy showed off several lightsabers, and although the colour varied the hilt design was relatively conventional across Obi-Wan’s, Darth Vader’s and eventually Luke’s saber. In fact, at least in the movies, a different style of the lightsaber wasn’t introduced until 1999’s Phantom Menace and the iconic shot of Darth Maul’s doubled bladed lightsaber. After Maul’s double-ended saber, Dooku debuted a curved hilt, Grevious wielded numerous saber’s at once, and in the sequel trilogy Kylo Ren’s hilt known as a ‘Crossguard’ shows off yet another style of Force user weapon. 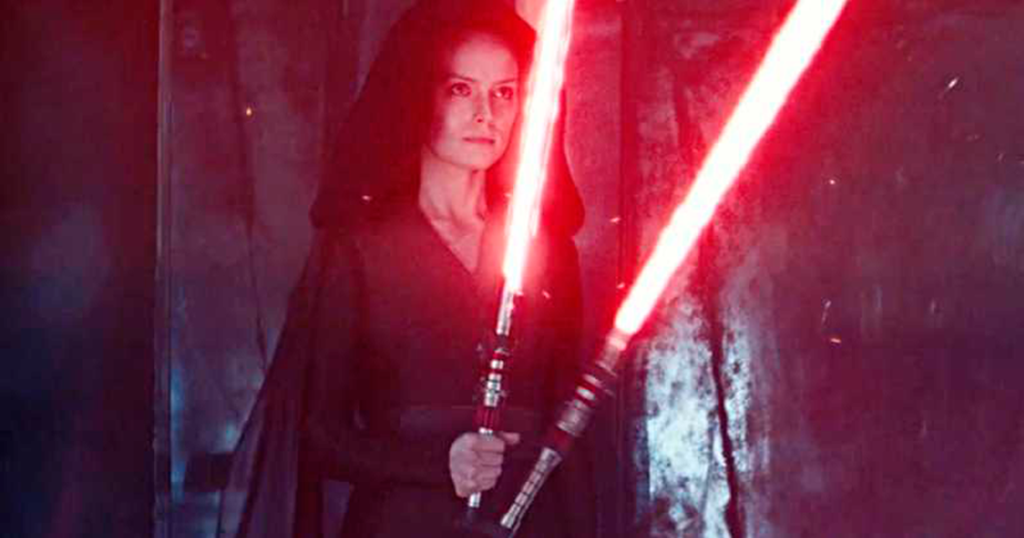 And so given that the different styles of lightsabers (mostly) tend to debut with a Dark Side user, at least in terms of live-action, the second Rise of Skywalker teaser shows off not just a new style of lightsaber, but what appears to be a Dark Side version of Rey wielding it. How exactly Rey’s path leads to this is uncertain, but there are perhaps some hints in the style of her new lightsaber which has made some brief appearances before.

Variations on the double-bladed lightsaber have appeared throughout the movies, animated shows, video games, comics and novels, but the first time Star Wars fans got to see a double lightsaber hilt that was foldable on screen was in the animated Star Wars: The Clone Wars. During the five-episode Umbara arc, we see Jedi Master Pong Krell, who is an infamously effective but ruthless war general, slowly reveal his allegiance to the Dark Side and his aspirations to become Count Dooku’s newest apprentice.

Krell, who has four arms and two double-bladed lightsabers, shows off his devastating lightsaber skills and then simply folds up his hilts and attaches them to his belt. An interesting thing to note here, that could possibly be a hint at Rey’s fate, is that Krell, the first on-screen character we see with this type of blade, starts out as a respected Jedi Master who turns to the Dark Side thanks to a vision of a Jedi Order in ruins (which would ultimately be proven correct). And so the idea of someone falling from light to dark is the first type of story we see surrounding this type of saber. 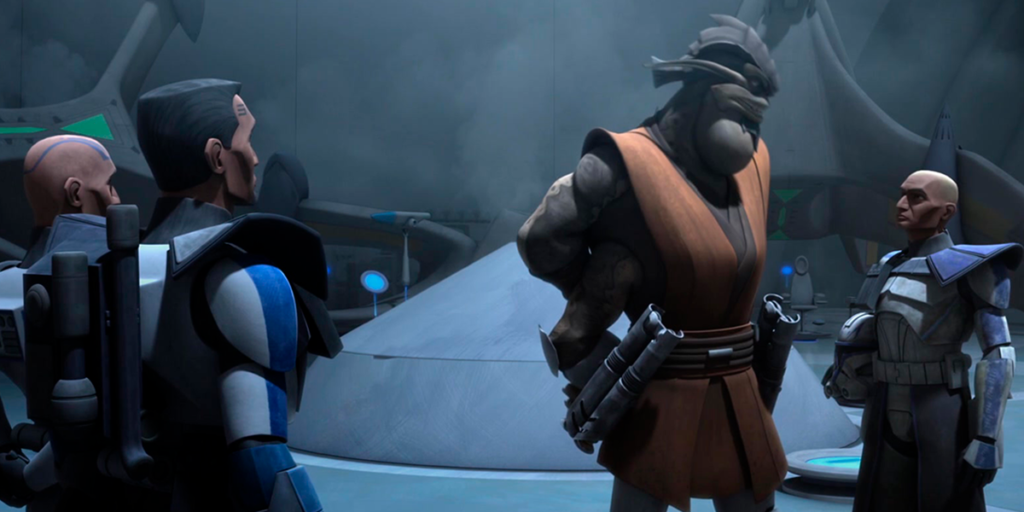 The second time we see a foldable double saber is during the Clone Wars’ successor series; Star Wars: Rebels. In the second season’s seventeenth episode ‘Shroud of Darkness’ we see a lightsaber with a foldable hilt and two yellow blades. This time the blade is in the hands of a Jedi Temple Guard, who are a relatively mysterious sub-sect of the Jedi that seemingly have their own distinct set of rules.

The interesting part to this foldable lightsaber reveal scene is that not only is it a Force vision (inside the Jedi Temple on Lothal), but it shows us that the Grand Inquisitor, a Force wielding Jedi-hunting Dark Side Acolyte, who has been the primary villain of the show so far, was once a Jedi Temple Guard. This was a big twist for Rebels, with the revelation that the Inquisitor and top Jedi hunter was once a Jedi himself, explaining his skill and knowledge, but also putting forward a lot more questions than it answered.

And so although it may be a bit of a leap (but let’s be honest, in the realms of Star Wars speculation what isn’t), we can say that both on-screen users of the foldable lightsaber were Jedi that fell to the Dark Side, perhaps hinting at this same fate for Rey.

With the Emperor involved he may well of given Rey this foldable lightsaber as a hint to this, see either his face as he retells the story of Darth Plagueis the wise, or his smirk as he names renames Anakin Darth Vader (‘Dark Father’) as reference for his love for cruel irony and symbolism. 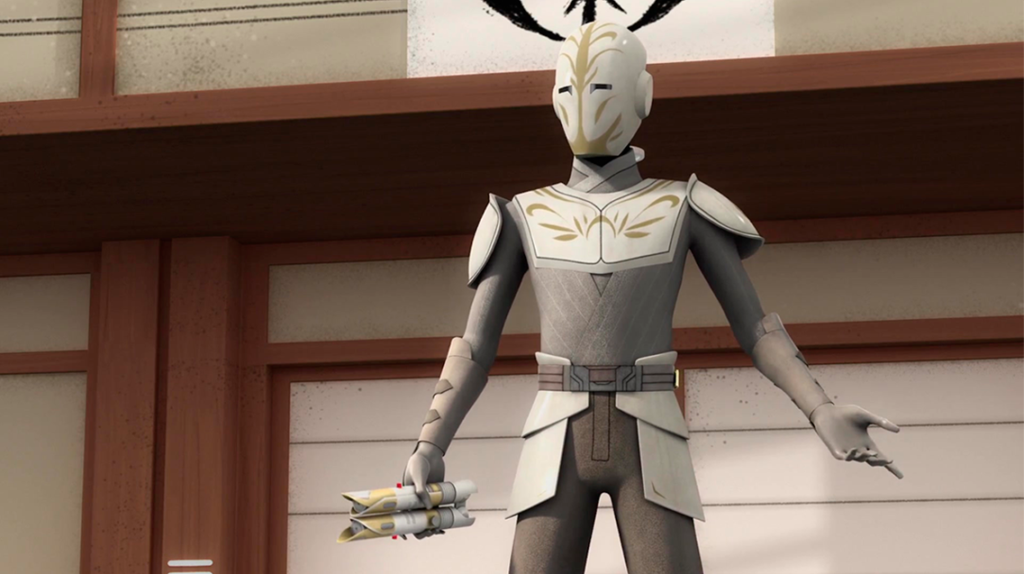 How exactly Rey with a switch-blade style lightsaber will play into the Rise of Skywalker is still a pretty big unknown, and whether it’s a Force vision, some deception by Palpatine, or simply evil Rey, a clever trailer misdirect or something completely different remains a mystery, and likely will until fans can see the end of the Skywalker saga in December.