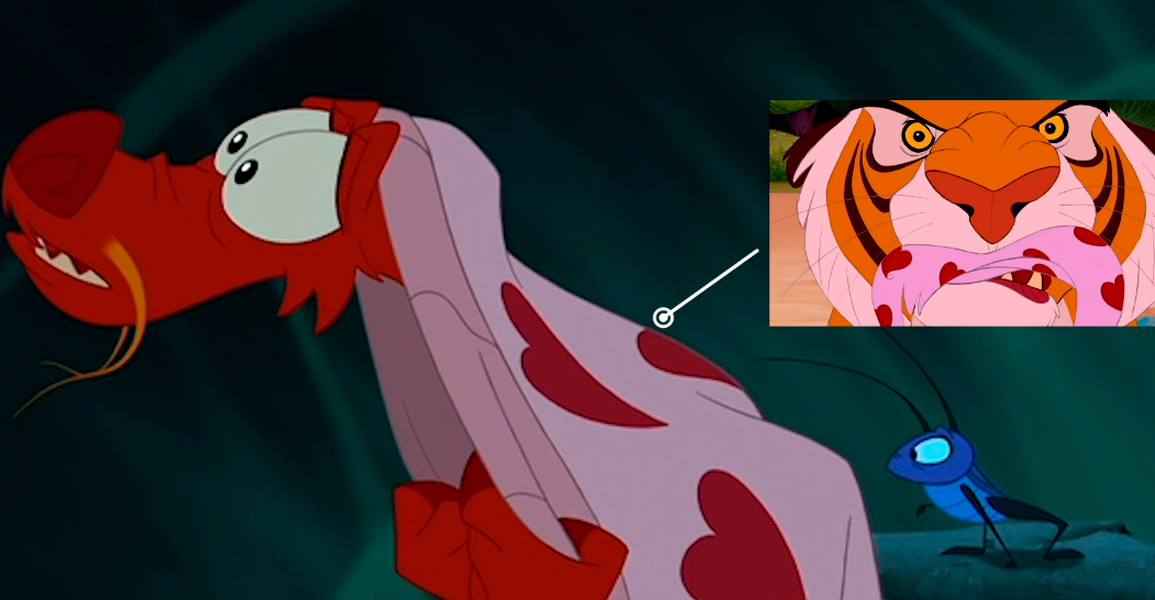 In our Disney’s Mulan’s Best Easter Eggs, we’re taking a look at the best easter eggs, references and cameos in Disney’s iconic 1998 animated feature film. If we missed your favourite Mulan Easter Egg, or you want us to do another Disney Easter eggs video, let us know in the comments below…

Disney Animators in the Temple

As Mulan’s ancestors wake up the Chinese symbols in the temple are the names of Disney animators who worked on the film. 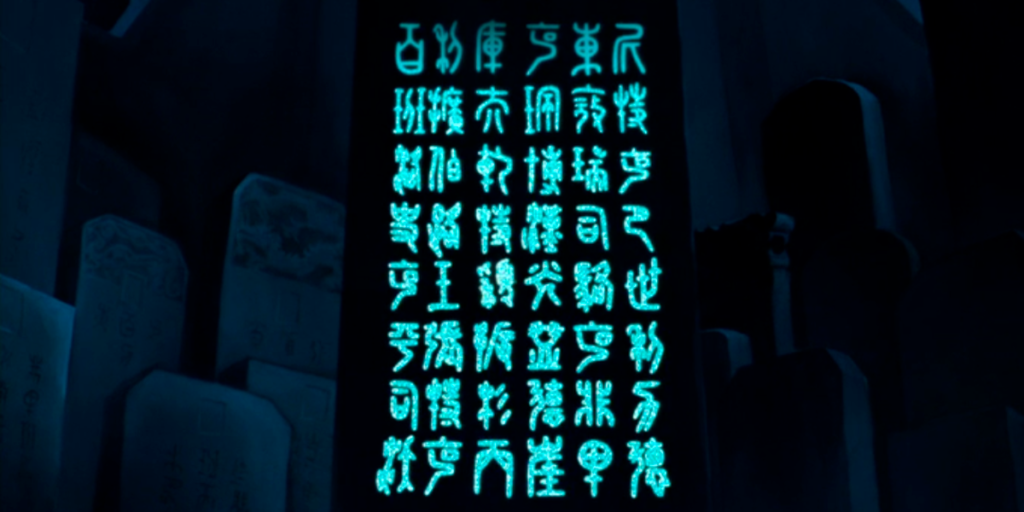 As Mushu first wakes up his arms are outstretched as an homage to Frankenstein, as he says “I live”. 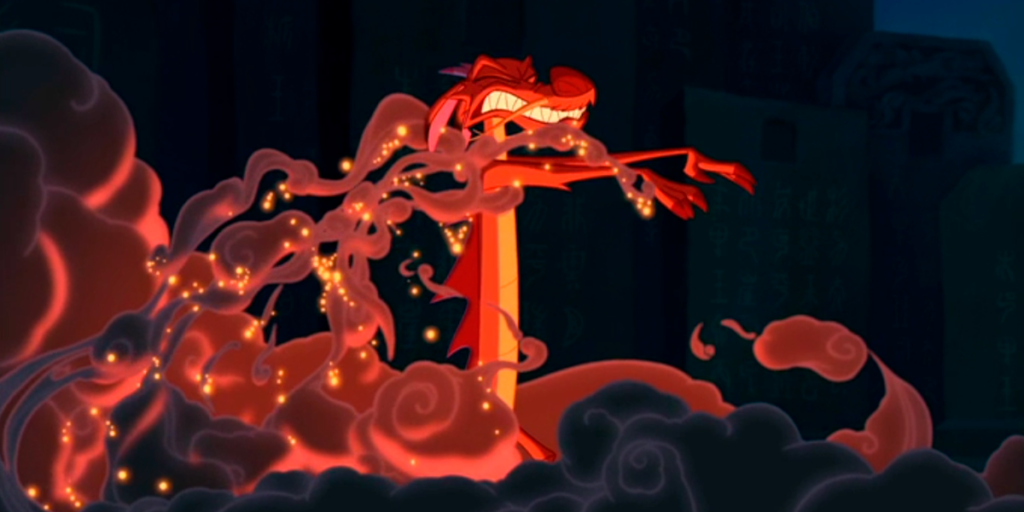 As Mulan’s ancestors discuss the repercussions of her choice to take her father’s place in the army two members of the Hua family worry that they may lose the family. The ghosts bear a striking resemblance to the farmers in Grant Wood’s iconic painting from 1930, American Gothic. 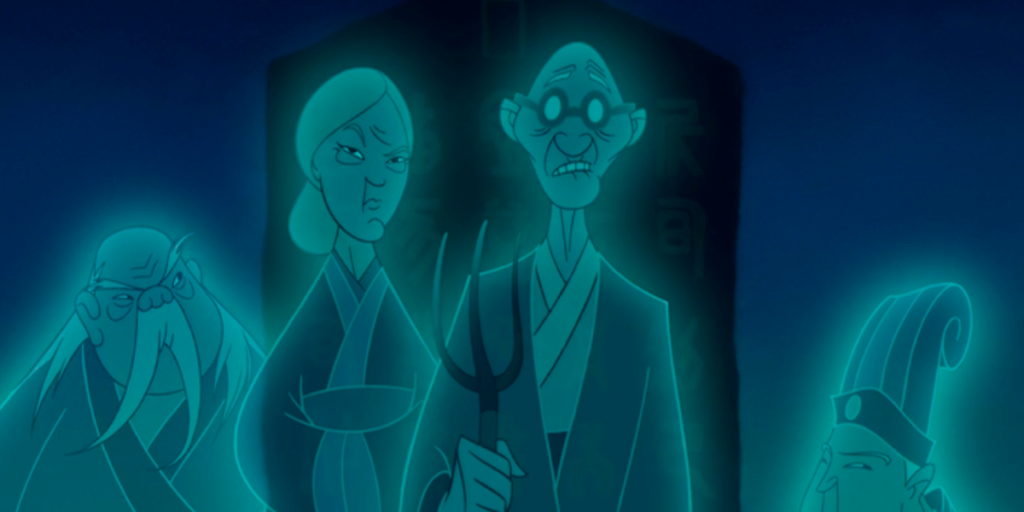 The dragon is an extremely symbolic creature in Chinese culture, embodying power, strength and good luck. Dragon statues can be seen continuously throughout Mulan, where the directors envisioned that each was a window through which Mulan’s ancestors could watch over her through. 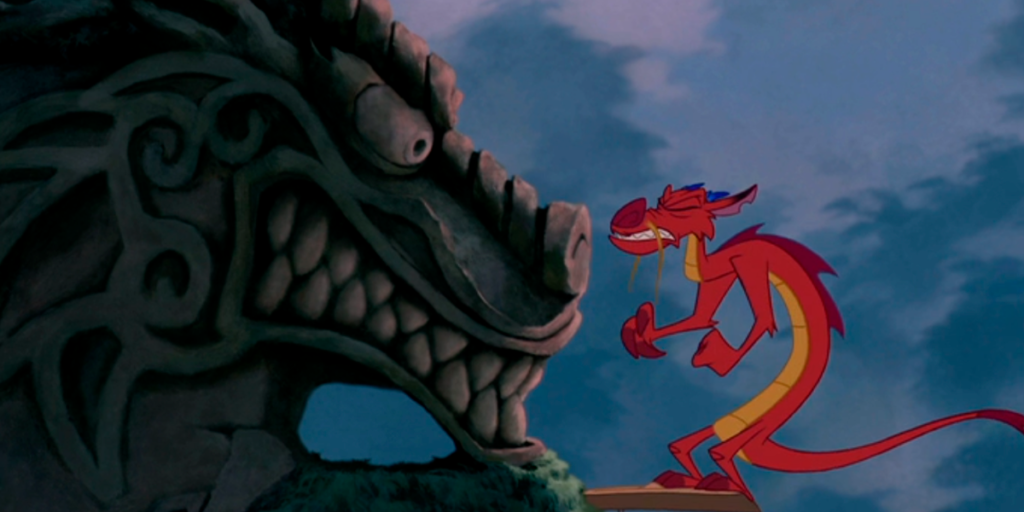 As Mushu wakes Mulan he says “rise and shine sleeping beauty”, referencing one of Disney’s most famous animated feature films. 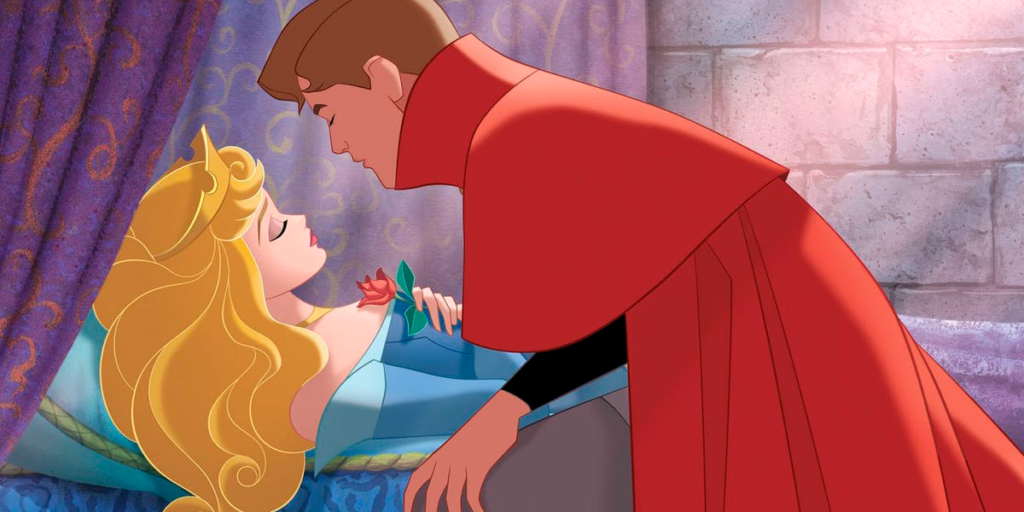 The love heart-themed underwear, which are an animation trope, which is thrown on Mushu are the same ones Prince Achmed was wearing in Aladdin, as he was attacked by the Princess Jasmine’s tiger Rajah. 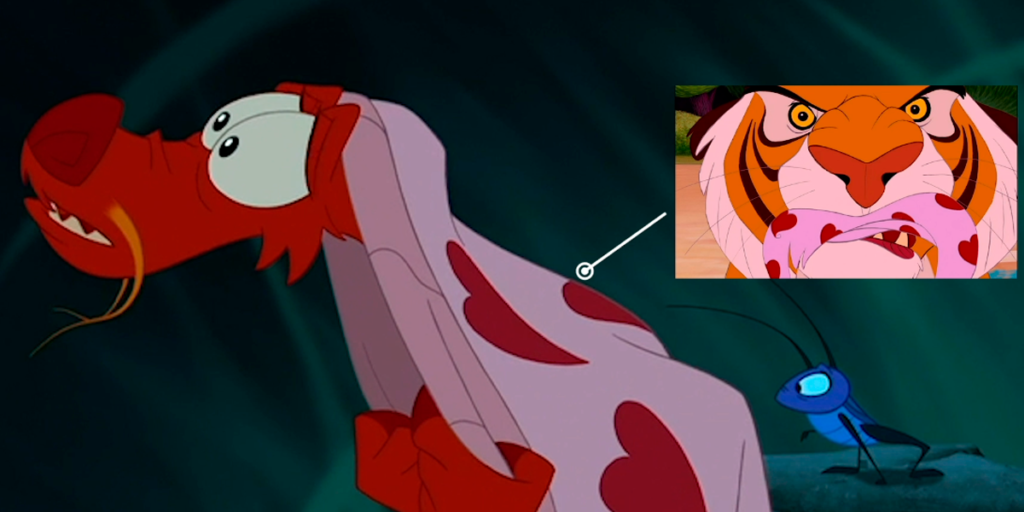 The song “Honor To Us All” features the lyrics “A girl can bring her family great honor in one way, by striking a good match”. Mulan later struggles to light a canon, but uses Mushu as a ‘match’ to light it, and destroy the Hun army with an avalanche. At the end of the movie, Cri-Kee and Mushu light the firework with a. match, whilst Mulan fights off Shan Yu. 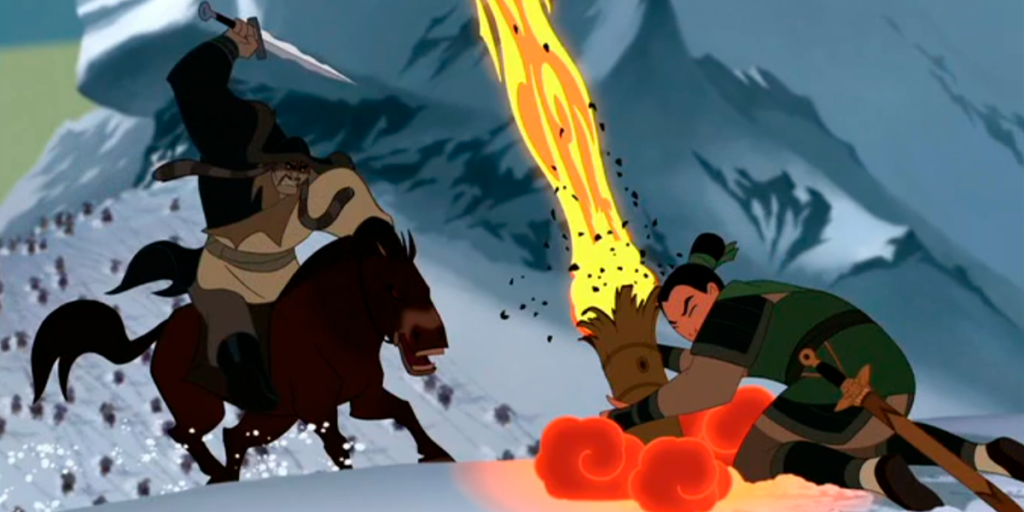 The two men that Mushu scares during the final battle, as he demands firepower, are animated versions of Mulan’s directors Tony Bancroft and Barry Cook. 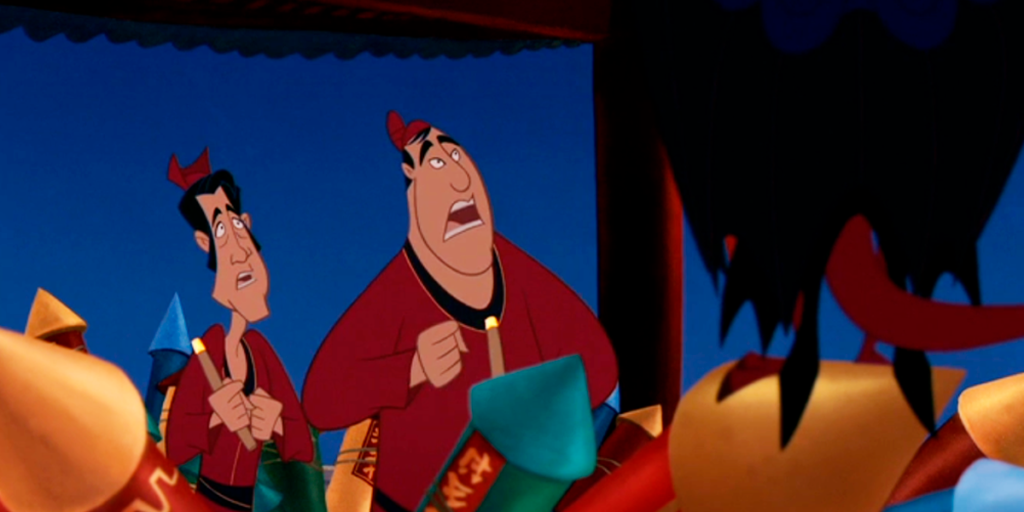 As Mushu arrives in a Batman-like fashion to demand “firepower” one of the men asks “who are you?” to which he replies “your worst nightmare”. This echoes the exact same lines form Sylvester Stallone in Rambo III. 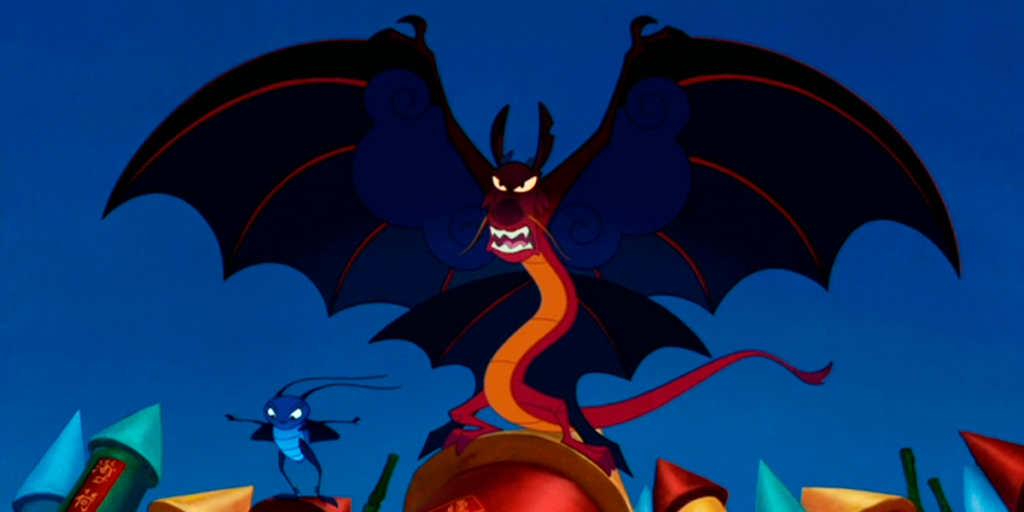 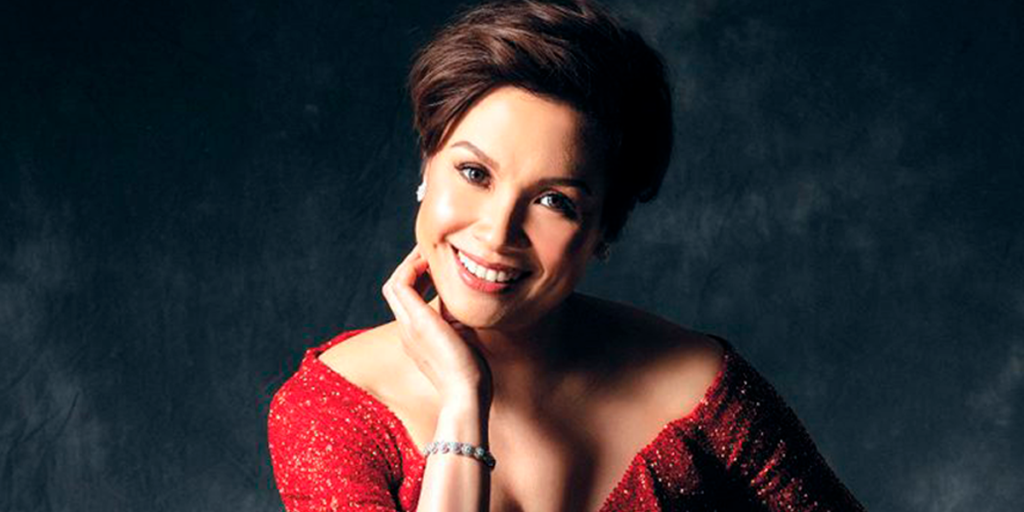 If you’ve enjoyed our Disney’s Mulan’s Best Easter Eggs post, be sure to check out our Aladdin Easter Eggs, or Hercules Easters Eggs, and for more Disney see our mini making of Documentaries detailing the story behind some of Disney’s most iconic movies…