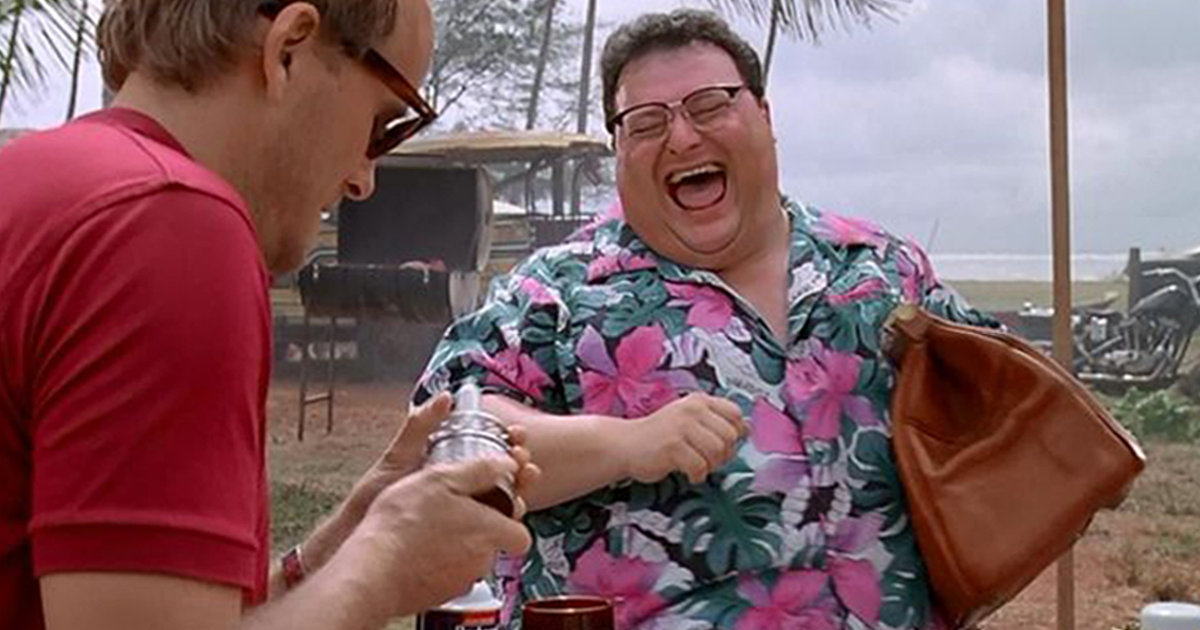 With Jurassic World: Fallen Kingdom being the fifth instalment to the Jurassic franchise, it’s filled to the brim with hints to the other four, as well as a number of other easter eggs, references and cameos, here’s our pick of the top twenty. 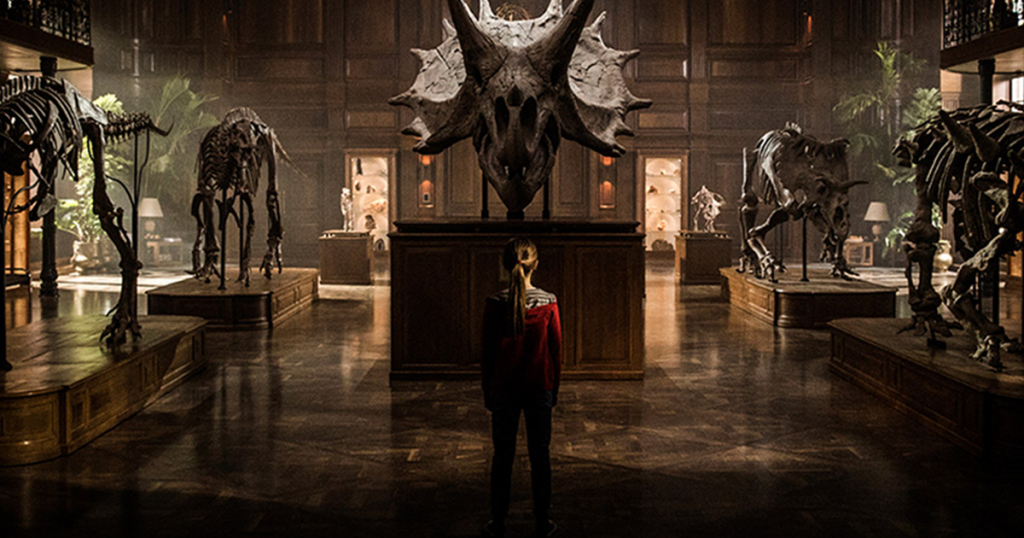 One of the main antagonists of the first Jurassic park movie is Wayne Knight’s disgruntled Dennis Nedry, who in essence caused most of the problems for InGen and the original park. In an effort to make Nedry even more distinctive than Knight already is, the character is seen showing off a number of particularly distinctive floral shirts. In what has to be an homage to Nedry, at the beginning od the movie we see one of the exploration sub’s pilot’s also wearing a particularly noticeable floral shirt in an otherwise pretty monotone scene. 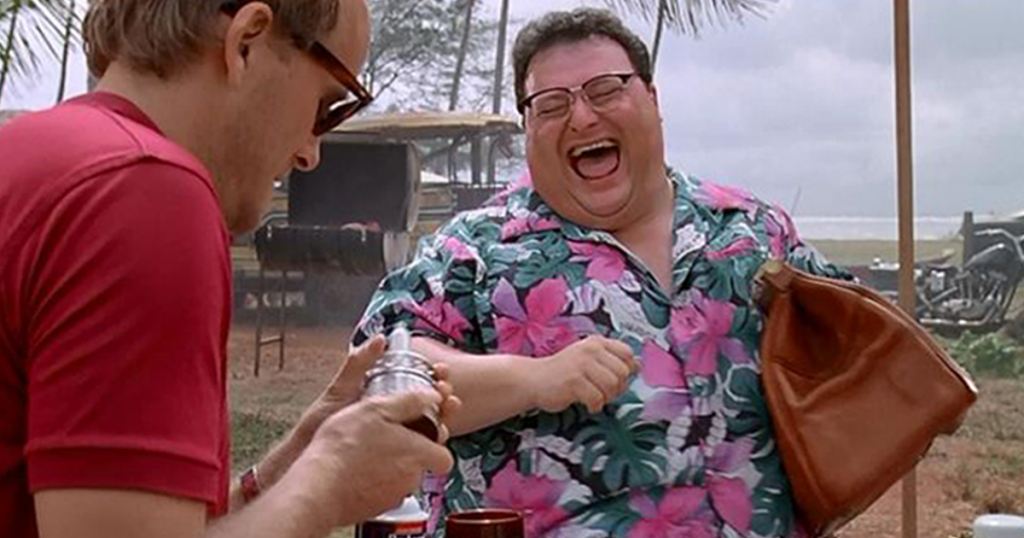 Probably the most recognisable scene of Nedry is his death, which shows him trying to escape the park only to be caught in the storm in his iconic Jurassic Park yellow rain jacket. Just after the opening underwater scene in Fallen Kingdom we see the mercenaries trying to get the DNA off the island, one of the techs (actually the guy controlling the door to Jurassic World) is caught in the huge tropical storm in a bright yellow rain jacket. 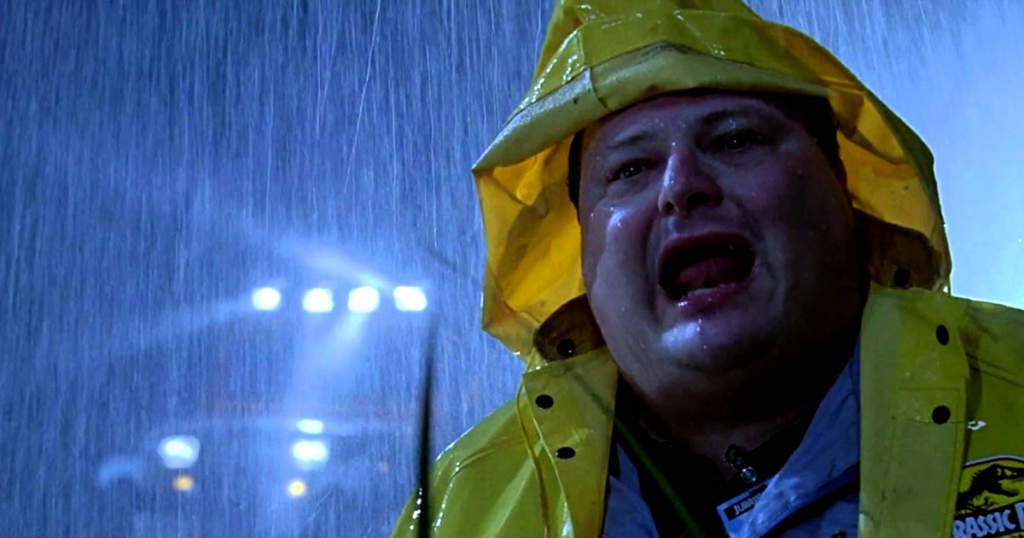 The return of B. D. Wong’s Dr Henry Wu in Jurassic World (originally appearing in the first Jurassic Park) was not only a nice tie in to the original movies, but his character served a hugely important purpose in getting the dinosaur DNA out of the park towards the end of the movie. In Fallen Kingdom he plays a similarly small but still villainous role and is shown to behind Mills’ plans to create the wepaonised dinosaurs. 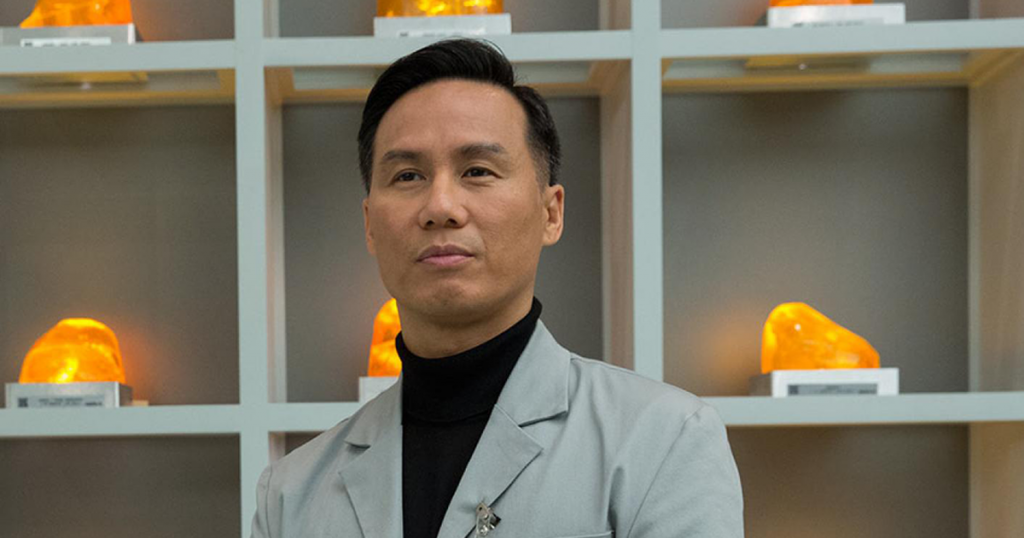 The first Jurassic World showed us a fully functioning park, that featured a number of 21st century upgrades to what we’ve seen before. One of those is the futuristic ‘gyrosphere’ that takes passengers in a sort of dinosaur safari around the more tame parts of the park. 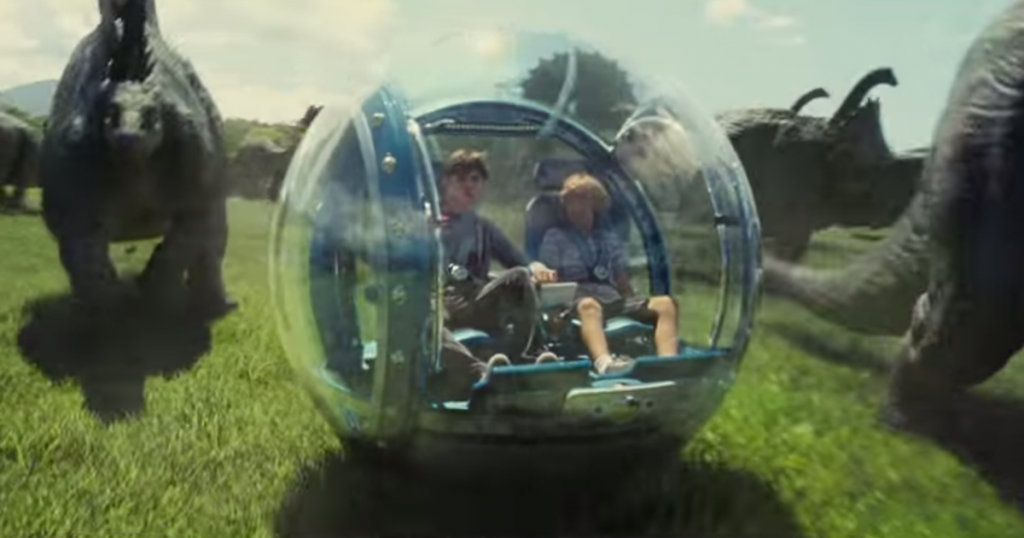 Gray and Zach (Claire’s nephews) eventually end up pushing their gyrosphere to its limits and barely survive an encounter with a more predatory dinosaur than the sphere’s are used to coming across. In Fallen Kingdom we see a similar escape scene in a gyrosphere, and as Owen runs on foot from the volcano eruption Claire and Franklin drive a gyrosphere away from the lava and dinosaur stampede.

A number of moments in Fallen Kingdom echo not just the original Jurassic Park movies, but the first Jurassic World movie as well. One of the more obvious connections is Claire going out to recruit Owen. In the first movie is was on Isla Nublar when they needed his help in tracking the Indominus Rex, and this time it’s when Claire needs his tracking down Blue. 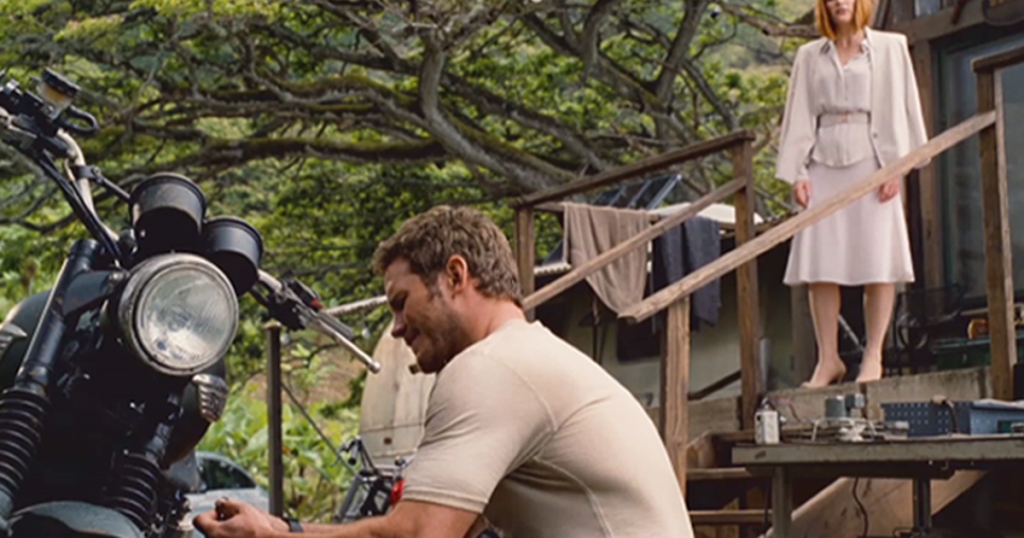 The scenes are almost a direct parallel, with the framing, context, a lot of the dialogue, and even Owen doing smothering Uber manly (first fixing up his motorbike, and now building his own cabin) to reinforce how badass he is.

In another Jurassic World parallel we see the Mosasaurus jump up out of the ocean and eat a human, it’s the exact same way it did it in the first Jurassic World when the audience watched a shark held above the Mosasaurus’ (showing off the massive size of the dinosaur) tank in a a SeaWorld-esque scene. 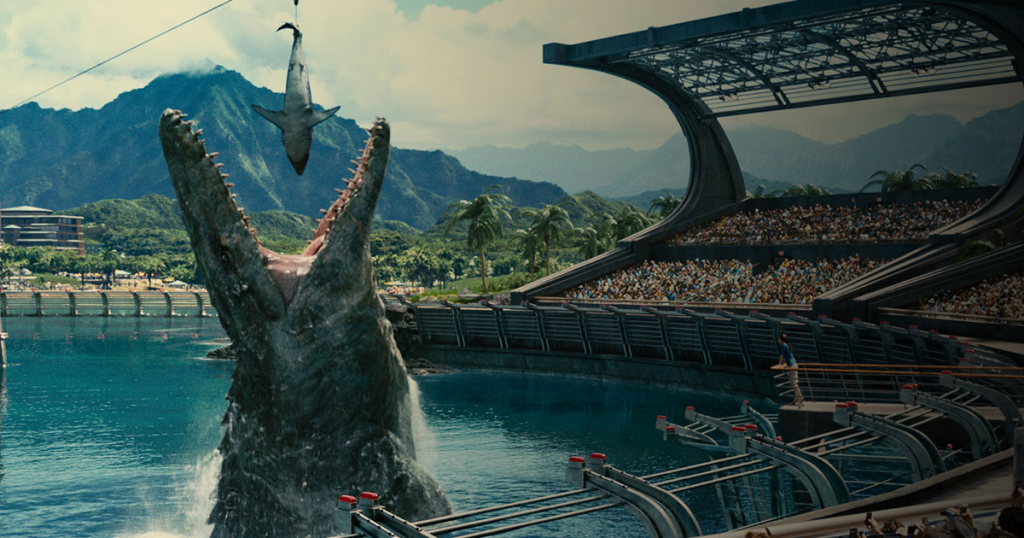 Whilst the Indorpator hunts Maisie throughout Lockwood’s house, we see a scene of a toy horse in the foreground and it’s shadow, or at least what looks to be it’s shadow, in the background. We soon work out that the shadow is of the dinosaur as it creeps forward and opens it’s mouth. This scene is a direct homage to a similar one in the original 1993 movie. 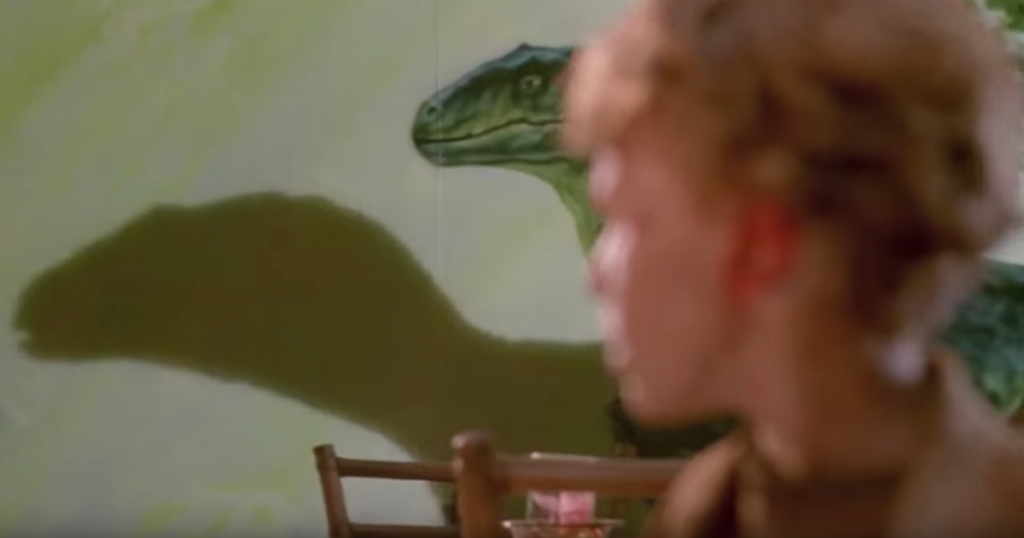 Fallen Kingdom features yet another wholly new species of dinosaur, the indoraptor, but it also features a number of other dinosaurs that we’ve seen before, and some we haven’t seen in a while. The most prominent of which is the Compsognathus (the very small ones) that featured prominently in all three of the original Jurassic Park movies. 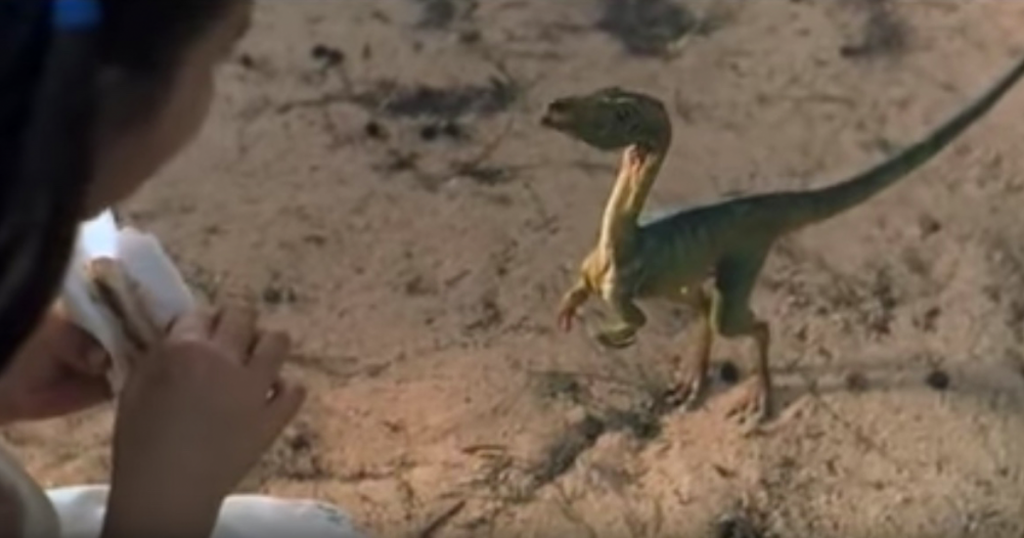 A large part of the beginning of the movie revolves around the volcano on Islar Nublar erupting, and getting the dinosaurs off the island in time. When Mills’ double cross is revealed and Ted Levine’s Ken Wheatley turns on Owen, Claire, Franklin and Zia we see Owen having to outrun the volcano’s lava and a dinosaur stampede. 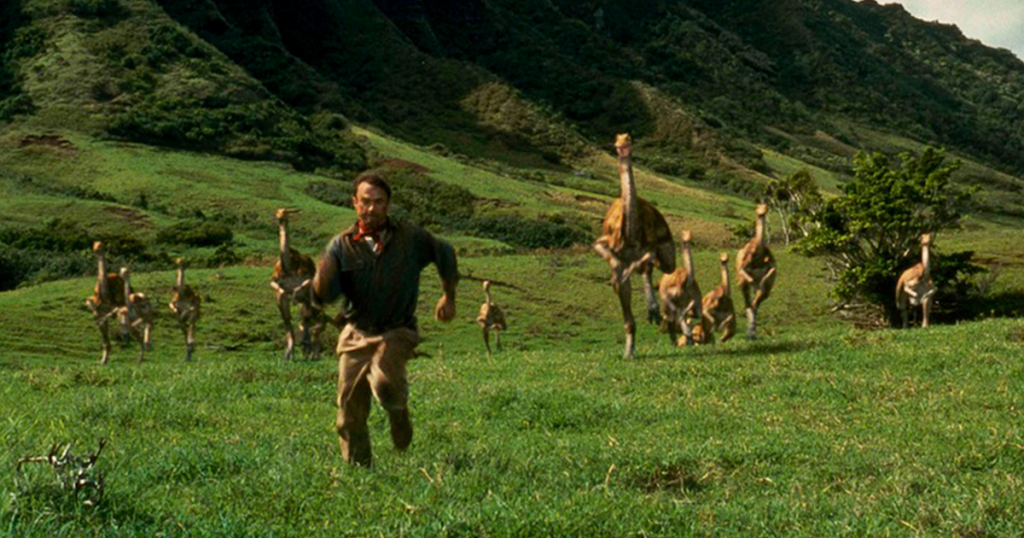 The scene that follows is a clear homage to Sam Neil’s Dr. Alan Grant running from another dinosaur stampede in the first movie (albeit that one wasn’t quite as deadly and didn’t have a load of lava).

In yet another homage to past films, the scene in which Dr. Zia Rodriguez performs a blood transfusion on Blue, gives us a number of camera angles and call backs to a similar scene in The Lost World where Jeff Goldblum’s Dr. Ian Malcom helps a baby T. rex (right before it’s parent’s crash in). 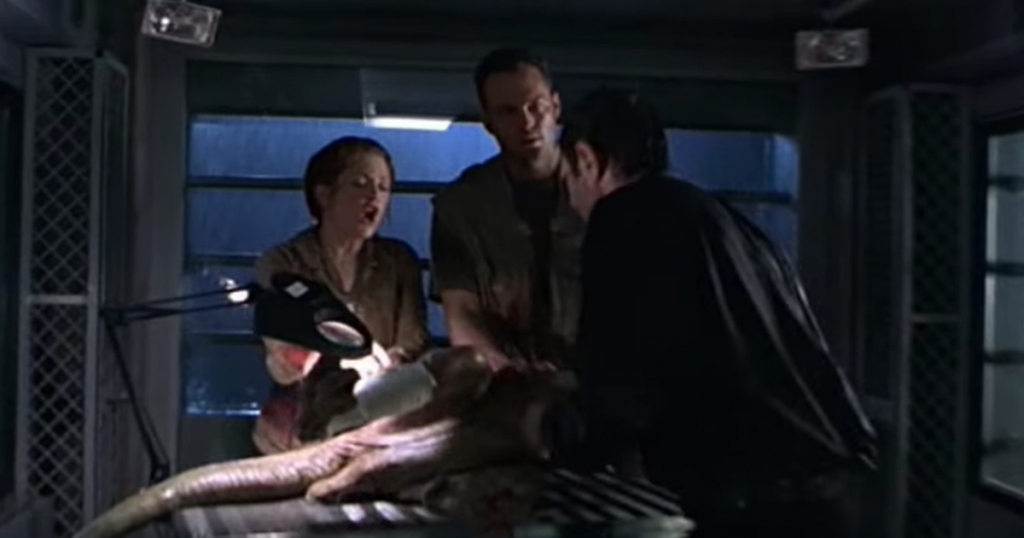 In a more classic, and less Jurassic Park related, Easter Egg, the code to the secret dinosaur making/auctioning facility underneath Lockwood’s estate is 7337. The movie makes a clear point of showing us the code prominently at least three times. This easter egg actually relates to the movies direct J.A Bayona, whose award winning short film (that really kicked off his career) was called 7337. 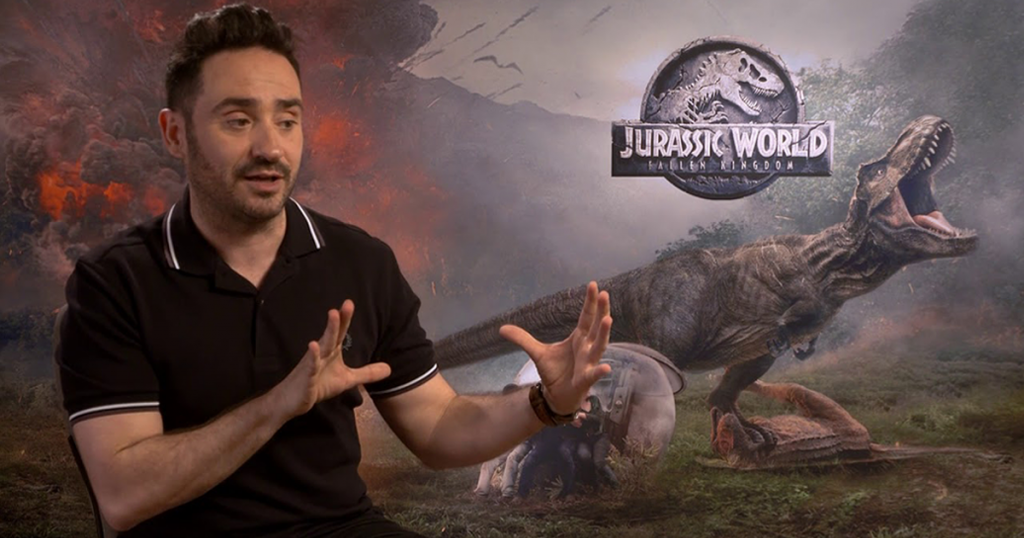 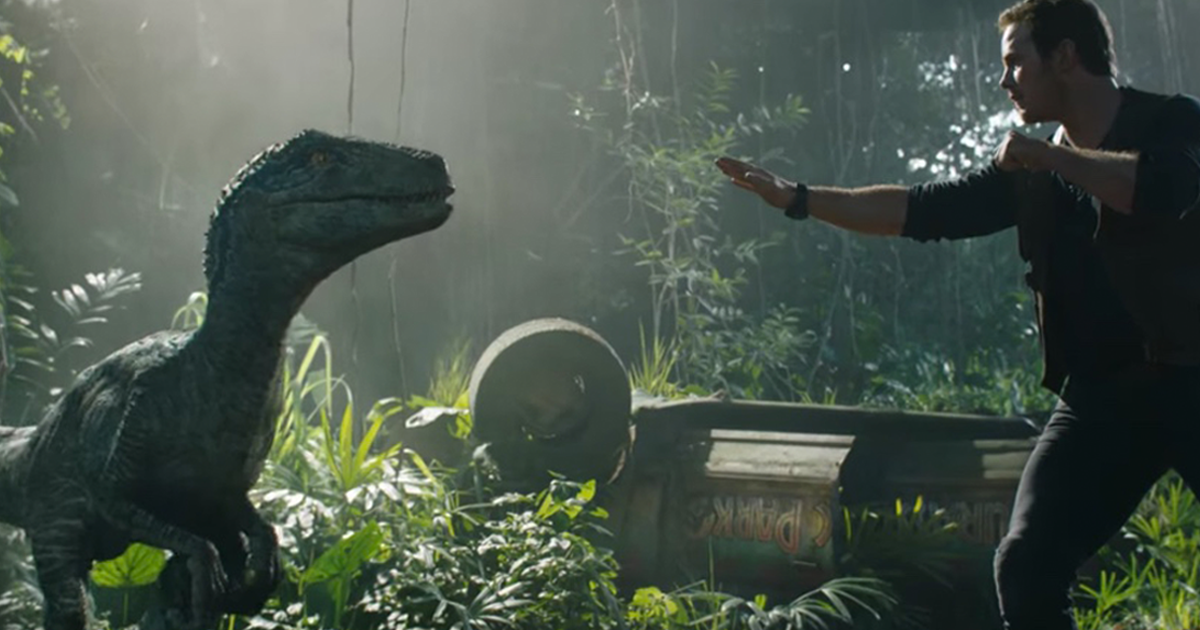 A truck (likely the same one from the first Jurassic world, given how most of the original parks assets have been long forgotten) is upturned and in the background of Owen’s reunion with Blue, and mirrors an overturned truck in the first movie.

Lockwood’s mansion is a treasure trove of dinosaur goodies, and Jurassic Park easter Eggs, the most obvious of which is a scaled down model of the original Jurassic Park. It shows that even though Lockwood and Hammond parted ways before the original movie, Lockwood’s influence on the park was crucial. 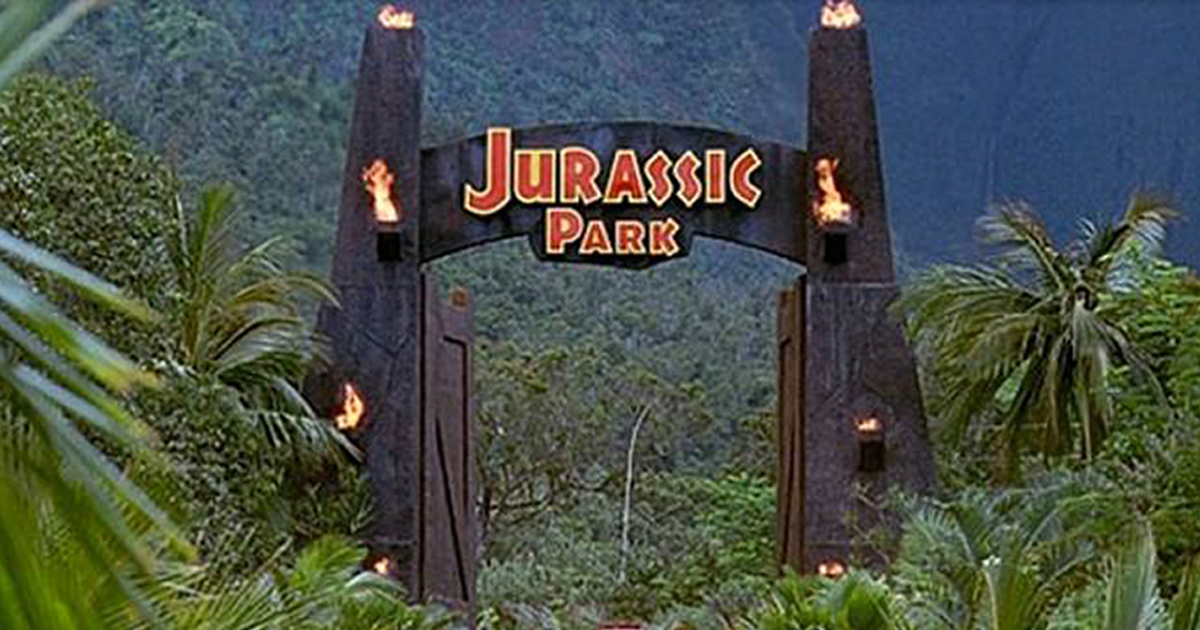 There’s no doubt that if Richard Attenborough was still alive he’d of played a relatively prominent role in the Jurassic World franchise, or at the very least took on a version of Simon Masrani’s storyline form the first movie. Instead however the first Jurassic World showed off the legacy of Hammond, along with a number of pictures, and a statue to show his continuing influence. 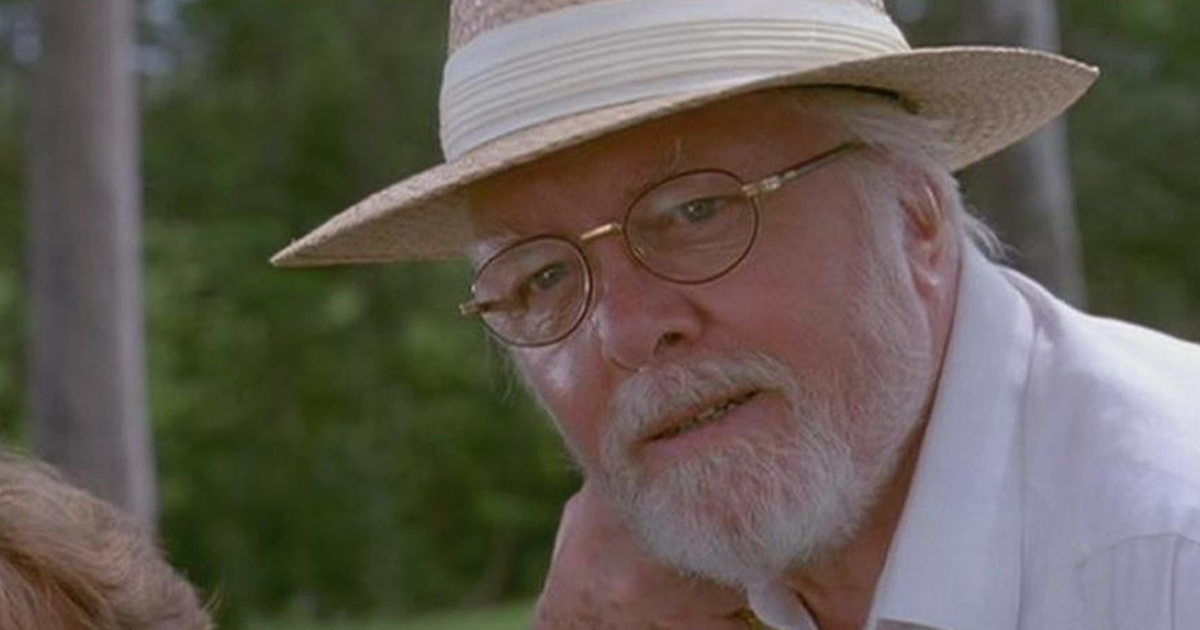 Here all of that is exaggerated, with the reason behind why he and Lockwood decided to bring the dinosaurs back in the first place being a prominent theme. We also see a large painting of Hammond in Lockwood’s house.

One of the most identifiable things about Jurassic Park creator, John Hammond, was his cane. Instead of a traditional handle it had an ‘amber’ sphere at the top, the same amber Hammond (and Lockwood) used to extract the DNA from to recreate the original dinosaurs. Here we find out that Lockwood also has an amber topped cane. Whether it is actually Hammond’s or his own (the second option being more likely) is unclear, but it’s a clear nod to both Hammond and the original movies. 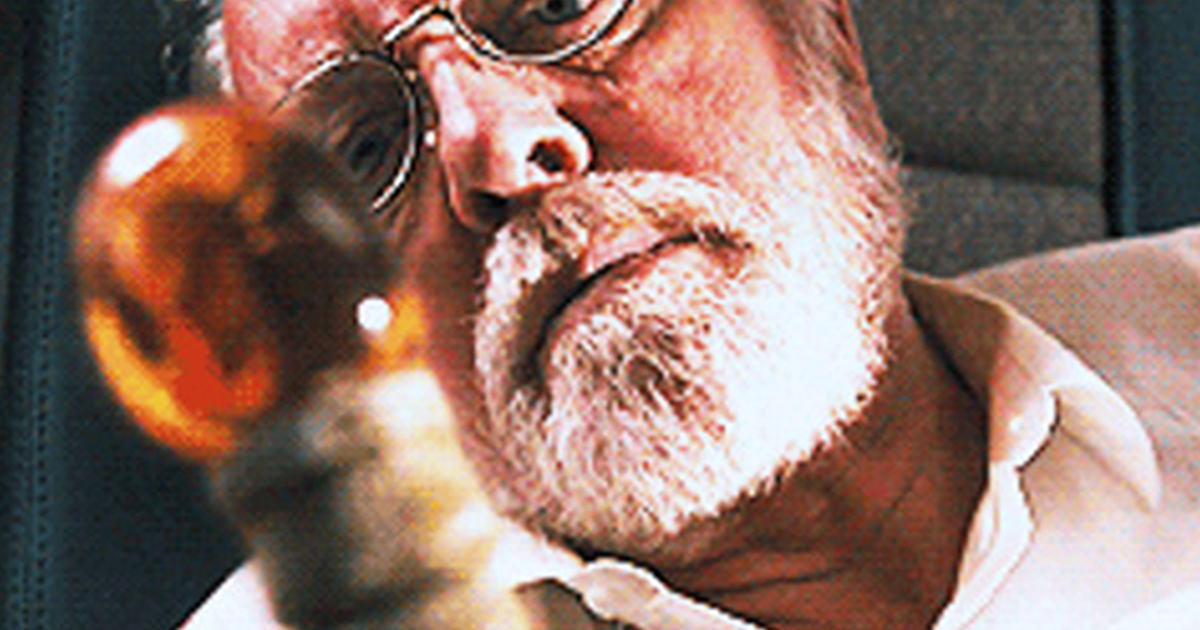 Even though Jeff Goldblum himself explained that his role in Jurassic World: Fallen Kingdom was no more than a cameo, most viewers of the final movie would likely be surprised that the marketing featured him so prominently (in fact most of his dialogue in the movie is in the trailers, including the closing line). That said it’s still the return of Dr. Ian Malcom, an important character in both Jurassic Park books by Michael Crichton (Jurassic Park and The Lost World), and of course the first two movies (also called Jurassic Park and Jurassic Park: The Lost World). 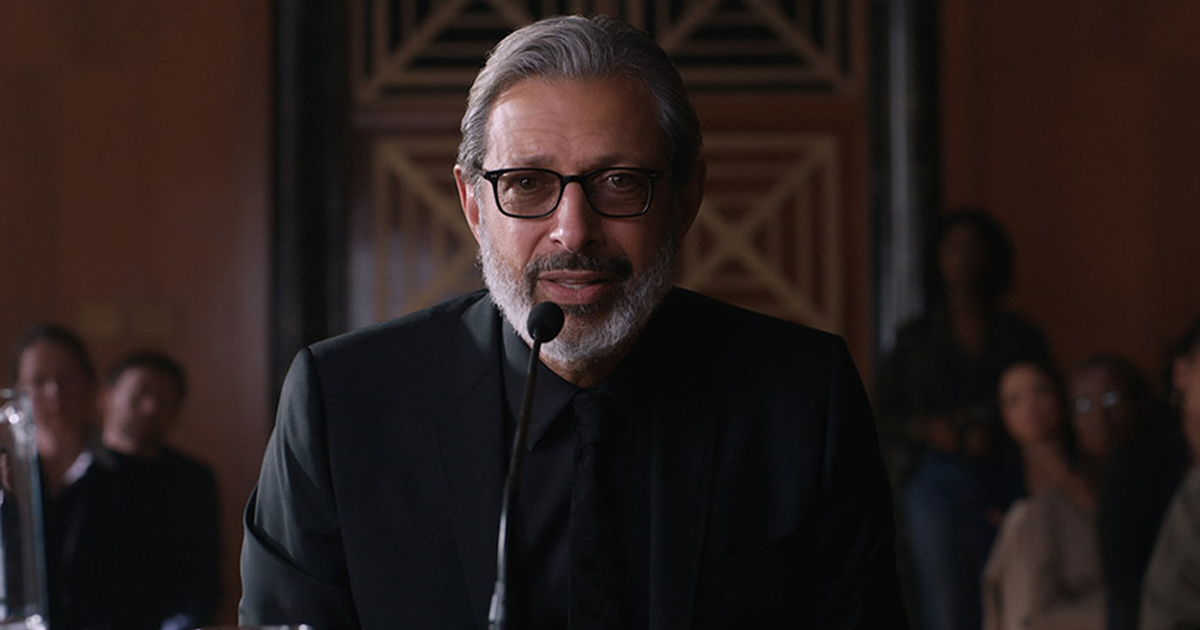 The first Jurassic Park movie had a large focus on people encountering dinosaurs for the first time (with them becoming more common place and accepted as the franchise continued), and the first time we see dinosaurs is in the iconic shot where a number of characters come across their first species, the long necked Brachiosaurus. 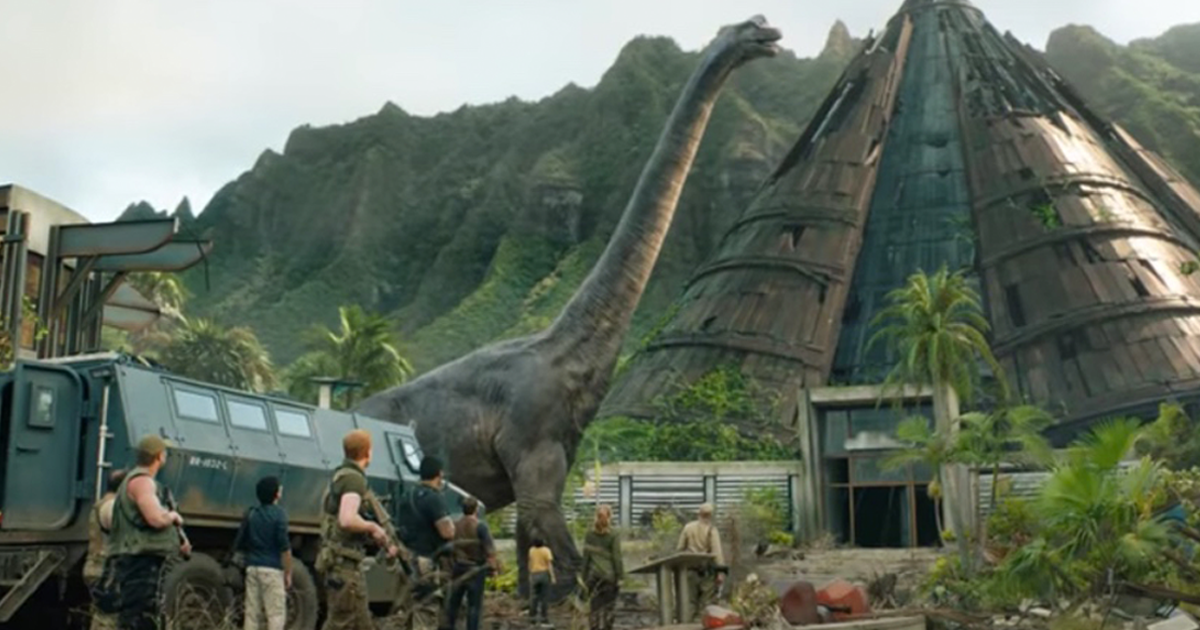 This scene is echoed both visually and thematically in Fallen Kingdom, where Daniella Pineda’s Dr. Zia Rodriguez see’s dinosaurs for the first time (and of course they’re Brachiosaurus).

Although Isla Nublar is the better known dinosaur island, both the second movie, The Lost World: Jurassic Park and Jurassic Park III take place on Isla Sorna. The second island is revealed to be a staging area of sorts, where InGen bred and raised the dinosaurs, in preparation for them heading over to the park on Isla Nublar. 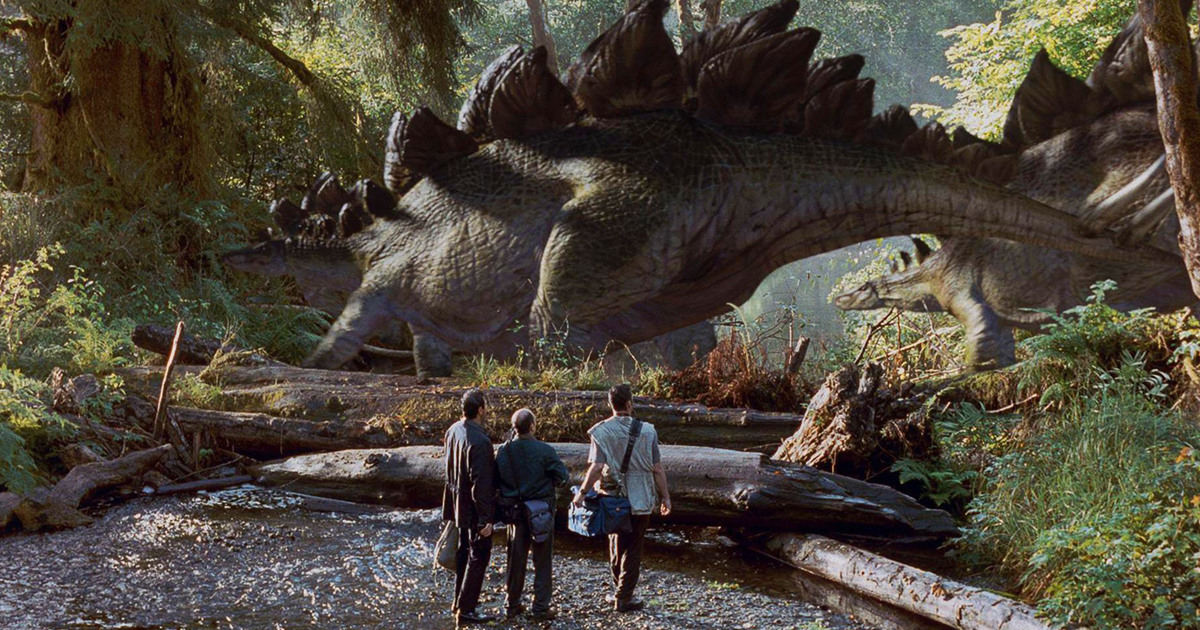 Although the second island wasn’t featured in Jurassic World, Lockwood himself mentions the island when detailing his plan to save the dinosaurs with Claire.

One of the biggest issues with the first movie wasn’t the impracticality of dinosaurs being brought back from extinction, or even that these people would, for whatever reason, trust InGen after numerous dinosaur disasters, it was of course Bryce Dallas Howard’s Claire wearing high heels through the entire movie. As she runs through all terrains and especially right at the end (from a T. rex) Claire’s heels are prominently in focus and the fact that she never tried to change them proved an issue for some viewers. 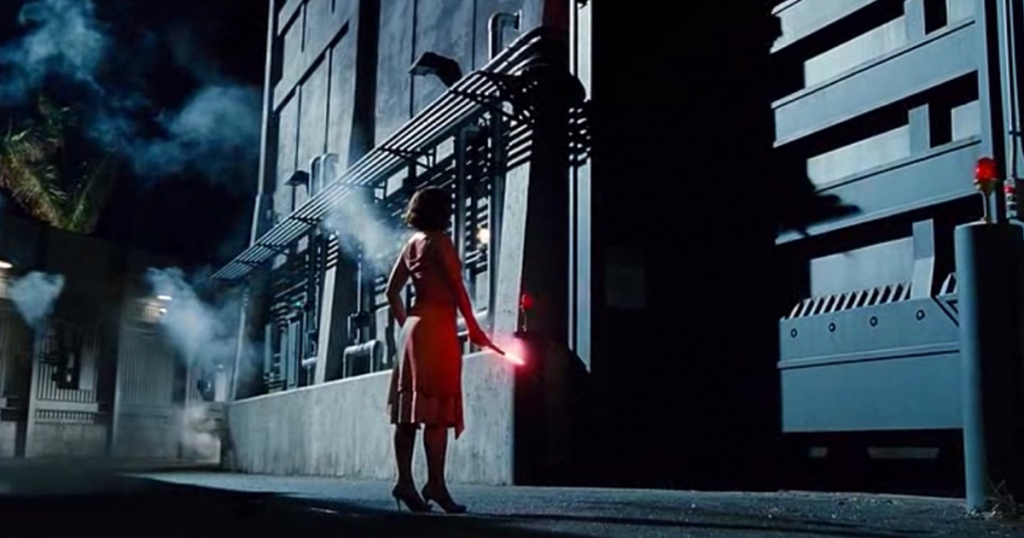 As if to address that point directly, the very first shot of Claire in Fallen Kingdom is her yet again her heels, with a later sequence that shows her getting off the plane on Isla Nublar showing her now in some much more adventure appropriate boots.

The T. rex was in many ways the hero of the original Jurassic Park, and it was only her intervention that allows the heroes to escape the raptors in the Visitor Centre. When Colin Trevorrow made Jurassic World he made a point of making the T. rex in that film being the same one as the first film, and thus it’s the same one in Fallen Kingdom. As she did in Jurassic Park the T. rex saves the humans from smaller (or bigger) dinosaurs in both Jurassic World and again in Fallen Kingdom (actually multiple times here), and exactly where she’ll end up is yet to be seen. 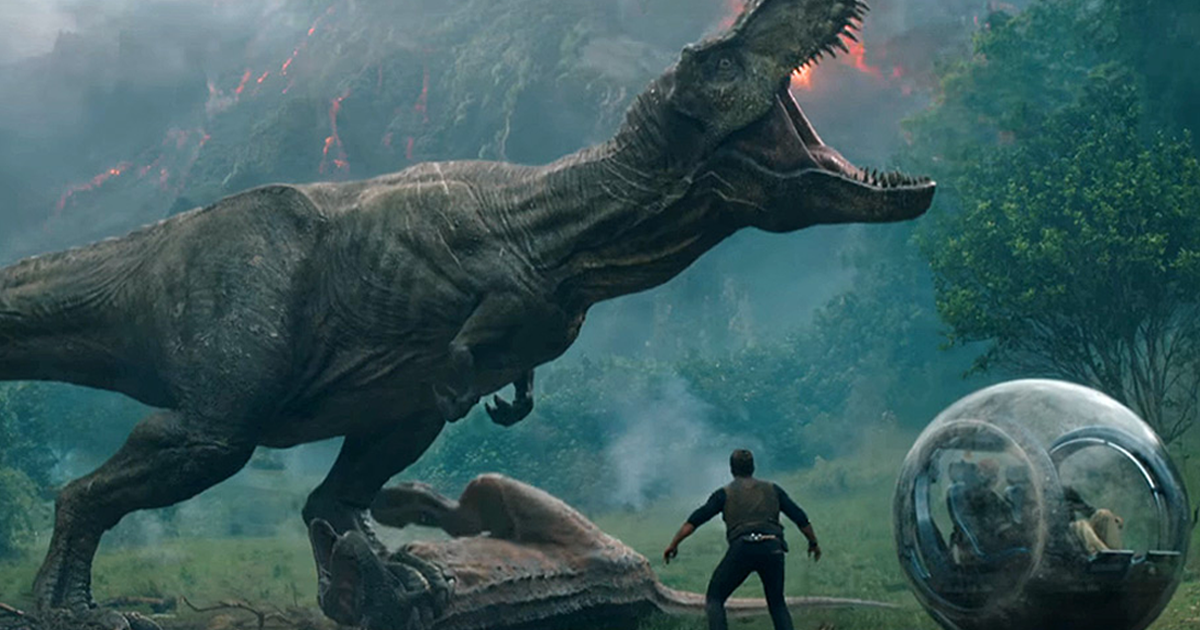