Amongst many other things SuperEpic: The Entertainment War is a Metroidvania style adventure that sees a raccoon and his llama best friend (who of course lets him ride him into battle) take on a villainous corporation literally ran by pigs. The corporation has destroyed the gaming industry by flooding the market with repetitive games designed to make money through microtransactions and further the pigs’ control over the world. There are giant toilets for save points, grandma’s umbrella, and plungers for weapons, vampire pigs, real-world QR codes, angry monkeys, and bulldog guards, all of which total to SuperEpic sounding utterly mad on paper. But in reality, the game delivers some great visuals, some hilarious easter eggs and references, all backed up by some solid gameplay and an entertaining story. 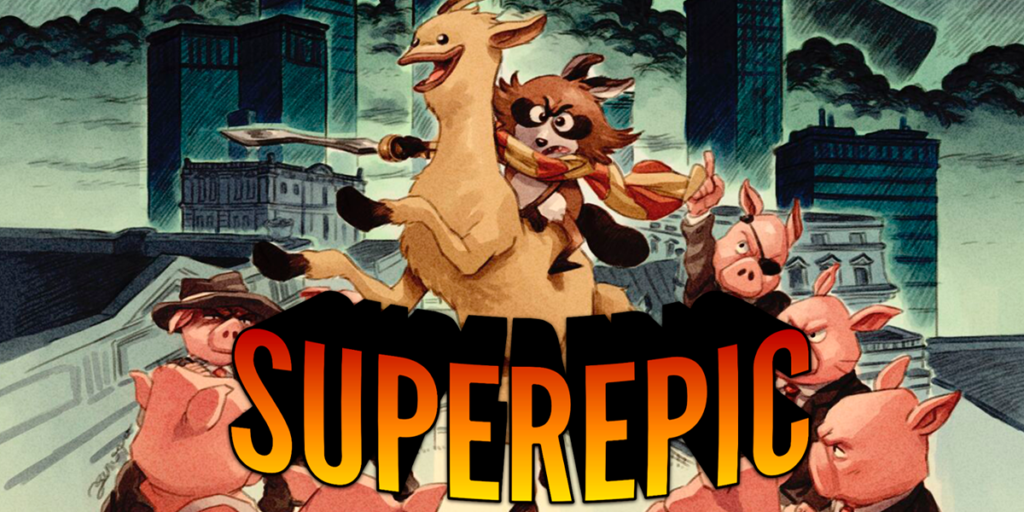 From Numskull Games and the indie team Undercoders SuperEpic’s story sees a dystopian future where real story-based video games are a thing of the past, the world has instead been taken over by repetitive and brainless games designed to distract people and take their money. A small resistance forms and the game’s star, a raccoon, and his trusty llama sidekick are contacted by this mysterious group to help storm the headquarters of Regnantcorp, the company behind the sinister video games and world take-over.

The game makes no effort to sugarcoat its message, and instead proudly outlines its commentary on the (possible) direction of modern video games at every possible opportunity. As the player explores the Regnantcorp headquarters they overhear a number of pigs discussing their latest schemes to ensure player addiction and make sure they can make as much money as possible. With the conspiracy and control the pigs have over society becoming clearer as the game goes on.

In terms of gameplay as with any Metroidvania game, SuperEpic is filled with several unlockable abilities, upgradable weapons, and lots of revisiting locations for new collectables, upgrades, perks, and areas. The game’s economy sees money earned based on combat performance and hit streaks. The player is then able to invest in upgrading either their health, ability power, stamina, weapons and gear, or simply buy new ones, leading to some varied gameplay, and a real sense of making the adventure your own. 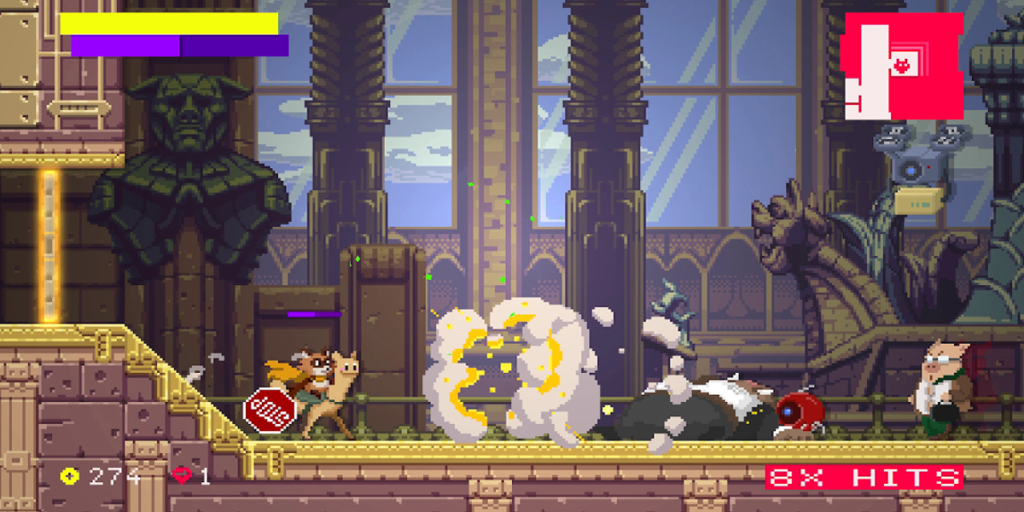 The enemies on SuperEpic are extremely varied, and often require smart use of different weapons or moves depending on their type. Although not especially difficult one on one (except for the bosses which can prove challenging) it is easy enough to be swarmed by groups, meaning that care and consideration need to be taken – only adding to the game’s immersion.

One of SuperEpic’s more unique features (aside from the flying vampire pigs and toilet save points) is the real word QR codes that take the player (via a smart device) to real-world mini-games. Some take you to the games that the pigs of Regnantcorp have created to enslave and manipulate the world, whereas others allow the player to unlock a sort of banking system, which lets them a deposit and retrieve money in different parts of the map. After completing the mini games games codes are rewarded and new areas of the game can be accessed.

In addition to the regular story-based mode, a dungeon crawler roguelike mode is unlocked relatively early on during the main game (as an in-development Regnantcorp test that the company think may be a waste of time as it’s too much of a real game). This mode sees the player start from scratch and work their way through several procedurally generated maps that compile the main game’s various assets in new and often very random ways.

SuperEpic’s biggest plus, however, is its aesthetic, style and sound. The past few years have seen plenty of beautifully realised throwback games, ones that deliver a modern take on the 8,16, and 32-bit games of the past. The likes of Shovel Knight and Axiom Verge prove that a particular style of game is almost timeless, combining a great sense of nostalgia, and production value with solid gameplay and a great soundtrack. SuperEpic follows in that vein, with some great visuals and a core game that is responsive and rewarding. 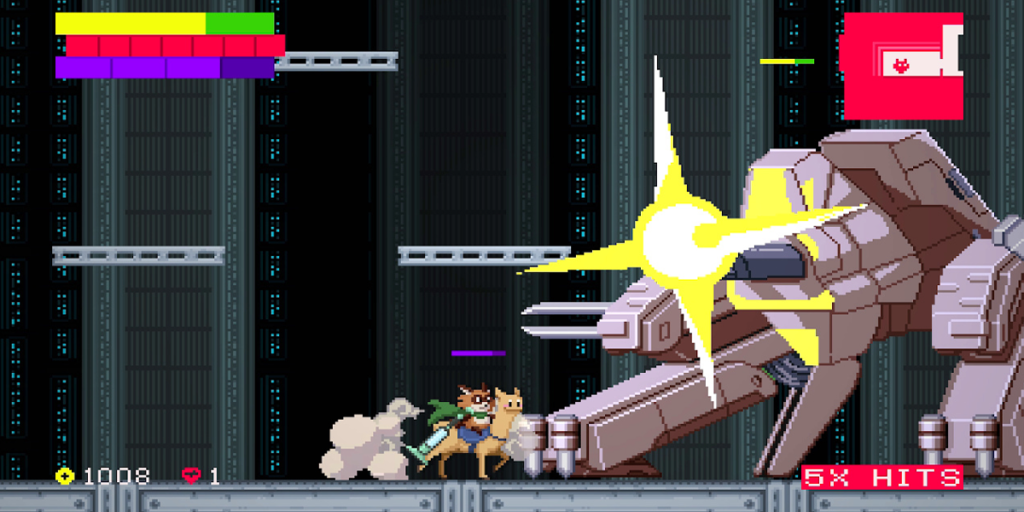 All in all SuperEpic showcases a great retro adventure with some top quality gameplay, visuals, and music. Although it is by no means subtle in its overarching commentary on the larger gaming industry, it presents those ideas hilariously and thankfully backs it all up with a great core game of its own, one filled with hidden details, clever easter eggs, and rewarding gameplay. For more on SuperEpic check out the trailer on YouTube. 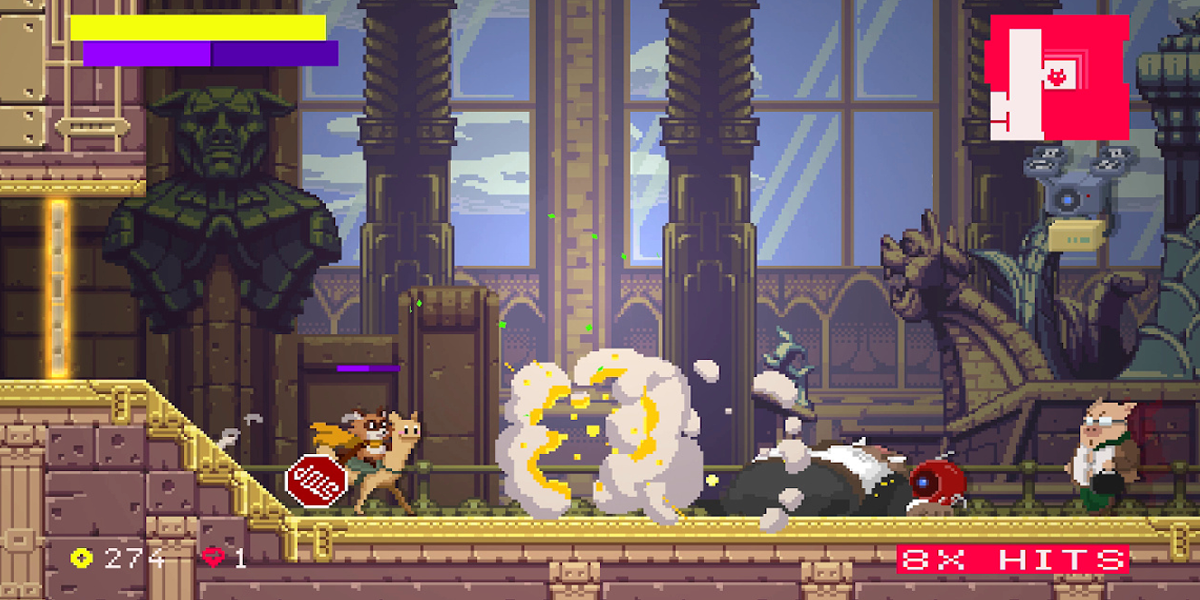