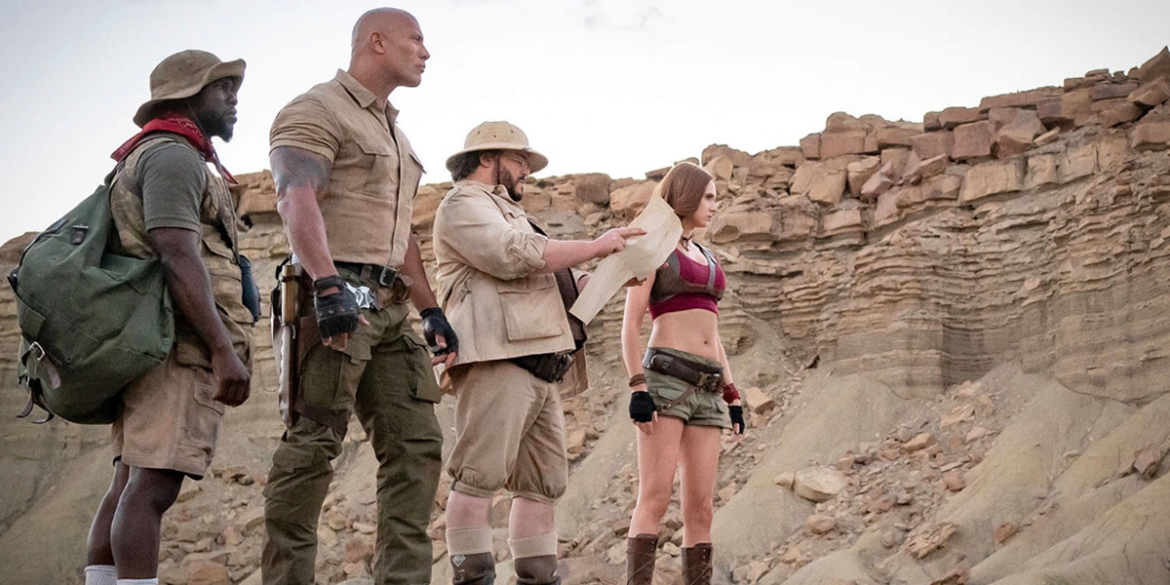 How Jumanji: The Next Level Brings the Franchise Back to Where it Began

When Jumanji: Welcome to the Jungle was announced it initially hit a strange balance between seeming like just another franchise for Dwayne Johnson to lead, or a needless follow up to an iconic nineties movie, all of which felt even stranger in the wake of Robin William’s death. In reality, however, the film managed to deliver an updated take on the world of Jumanji, an interesting look at going into Jumanji (rather than Jumanji coming into the real world as in the original movie), and above all else showcased a poignant look at a group of high schoolers and their respective struggles with self-identity. 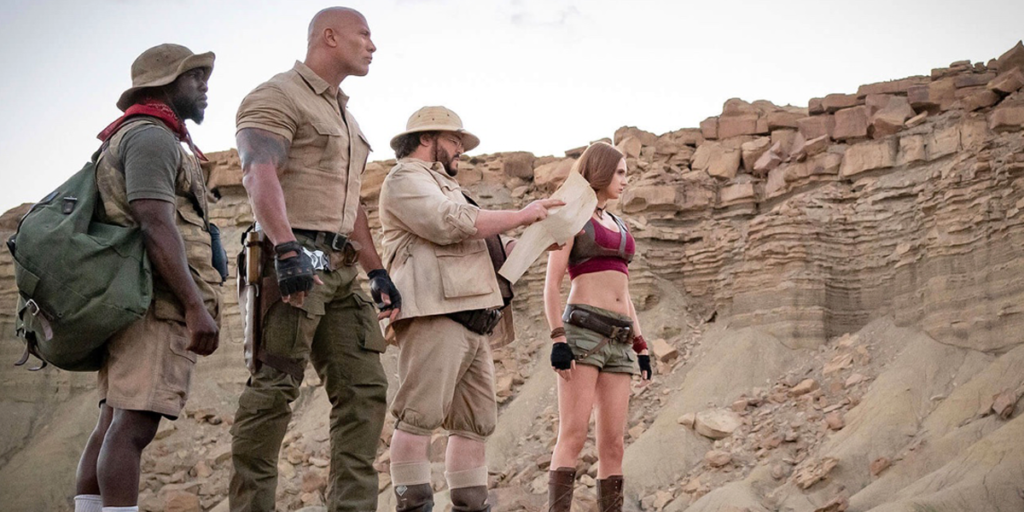 But as solid as Welcome to the Jungle was, and as worthy as a sequel it turned out to be, it didn’t set itself up for a sequel of its own at all. Where the 1996 original film ended with the magical board game washing up on a beach, waiting to throw another group of unsuspecting people’s lives into disarray, Welcome to the Jungle instead ends with the game being destroyed.

And yet Jumanji: The Next Level sees the same group of Spencer, Martha, Bethany and Fridge once again sucked into the world of Jumanji. This time however it’s a whole new adventure, with new characters, abilities, weaknesses, villains, and most importantly outfits.

The movie starts with Martha, Bethany, and Fridge happy with how their lives have unfolded following the events of the first film, but Spencer who is at college in New York (and unsure on his relationship with Martha) has quite a different attitude. After going home for Christmas, and having to share a room with his Grandpa Eddie (played by Danny DeVito) Spencer decides to re-enter the world of Jumanji. 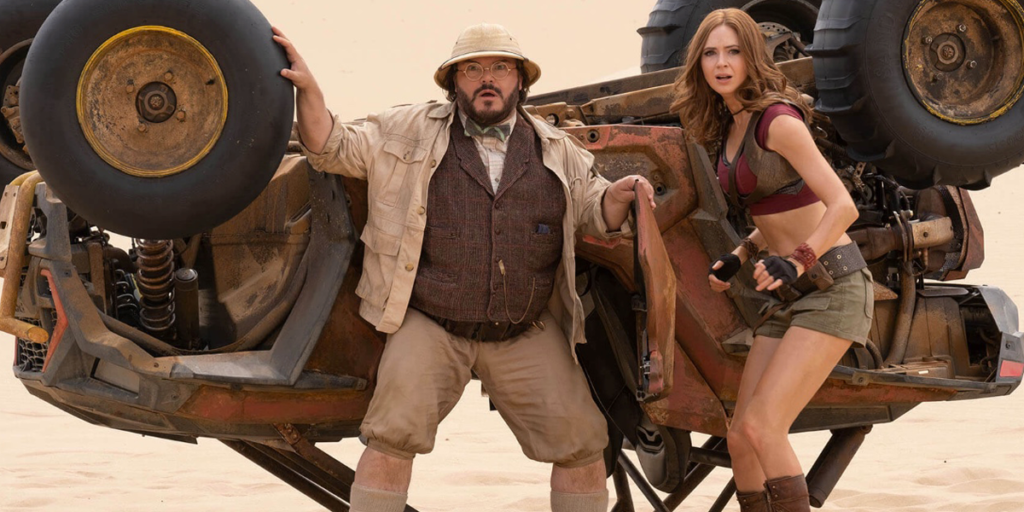 When he doesn’t show up for breakfast with his friends and doesn’t reply to their calls or texts they go looking for him. At his house, they find the partially repaired Jumanji video game they believed to be destroyed at the end of the last film. The game then sucks Fridge, Martha, Grandpa Eddie and Eddie’s estranged former business partner Milo (played by Danny Glover) into Jumanji (with Bethany and the adult Alex Vreeke joining later).

Although some of the movies more interesting twists were spoiled by the trailers, like Eddie (rather than Spencer) taking Dwayne Johnson’s Dr Bravestone avatar, and Bethany being a horse, later followed by a switch where Bethany gets to be Jack Black’s Shelly Oberon once again. There are enough twists and turns that left out of the trailer to deliver a very interesting film, and one that definitely succeeds is using the same vehicle as the first, to tell another story about self-identity and self-discovery, but adding even more weight this time around.

The movie manages to pack a surprising amount of emotion into each of its arcs, even the newer additions of Eddie and Milo, who are portrayed by three separate sets of actors (one being a horse) only making the feat even more impressive. Heading into the world of Jumanji allows Eddie and Milo to reconnect after years apart, and helps Spencer admit to his friends that he is struggling in New York, in particular with how it compares to how he feels as Bravestone. 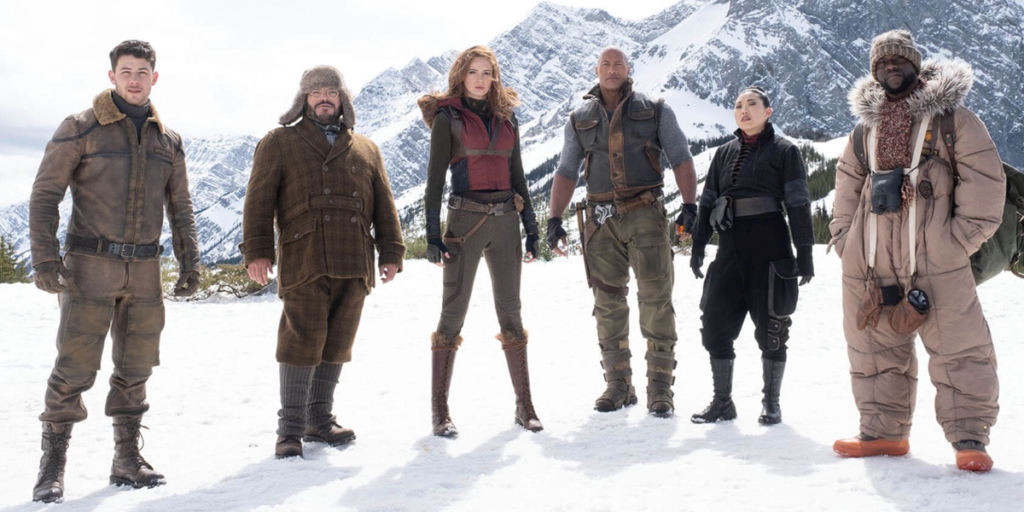 This is what makes The Next Level such an enjoyable continuation of the series, although it retreads some familiar ground from its predecessor, it does so by developing the characters even further, making the consequences and events of Jumanji: Welcome to the Jungle matter and taking the franchise in a new direction at the same time.

Of course, someone who had lived in the body of the Rock, but with actual superpowers, inside a video game world would want to go back, even if they weren’t unhappy with their own life. And so Spencer’s story answers a very real follow up to that first movie, but more than that his arc in this film doesn’t undo his one from Welcome to the Jungle, a trap many sequels often fall into, instead, it uses it to create an even bigger problem for him to overcome.

I do however think that some of the poignancy the film touches upon with Spencer is ultimately lost when the characters switch to the in-game avatars of their choice. When he first enters Jumanji in Welcome to the Jungle, Bravestone symbolises everything he feels like he isn’t but reveals who he really is within. This time he hopes to be Bravestone again, but instead ends up as Ming Fleetfoot. He complains that she is small, crafty and that her weakness is allergies – so she is basically him as he is in the real world. It feels like Jumanji is trying to tell him something, to simply believe in himself, and that going back to being Bravestone isn’t the answer. Even more than that he would have actually succeeded in stealing the key to the chest containing the jewel all on his own as Fleetfoot if the other players hadn’t intervened. 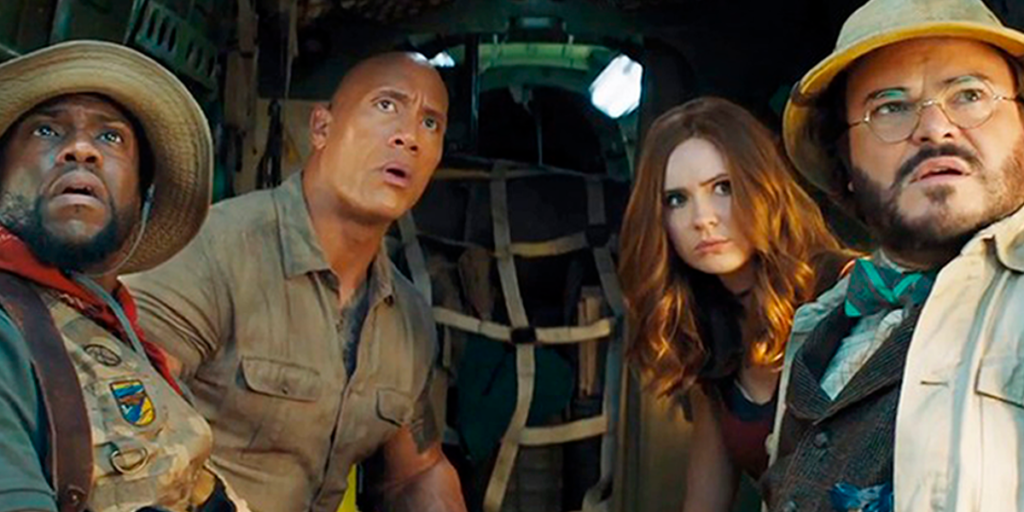 Unfortunately, this direction is abandoned when the players are easily able to switch into who they really want to be, with Spencer becoming Bravestone once again (arguably showing that Spencer being Bravestone is the answer and losing some of that emotion it feels like the movie was initially going for). But I’d also argue that overall most of Spencer’s arc still works and seeing a more heroic, and typically Dwayne Johnson, version of Bravestone definitely works in the favour of the movie.

But where The Next Level succeeds the most is in what it sets up for the future of the franchise. Welcome to the Jungle ended on a seemingly definitive note that didn’t set up a sequel at all, The Next Level sees the characters promise to never return to Jumanji, only for Jumanji to come to them. A brief scene shows New Girl’s Lamore Morris find the broken Jumanji game, the shot then goes to Spencer, Martha, Bethany, and Fridge leaving Nora’s (which is mentioned numerous times throughout the movie and is actually one of it’s coolest easter eggs) only to see several ostriches, just like the ones they escaped from inside the game, running past them in the real world.

Not only does this bring the series back to the plot of the original movie, with Jumanji leaking out into the real world, but it also sets up an interesting dynamic where the characters will have to take on Jumanji in their own bodies without any powers, and could perhaps even meet the likes of Bravestone, Mouse Finbar, Ruby Roundhouse, and Shelly Oberon in their ‘true’ video game forms, but this time in the real world. 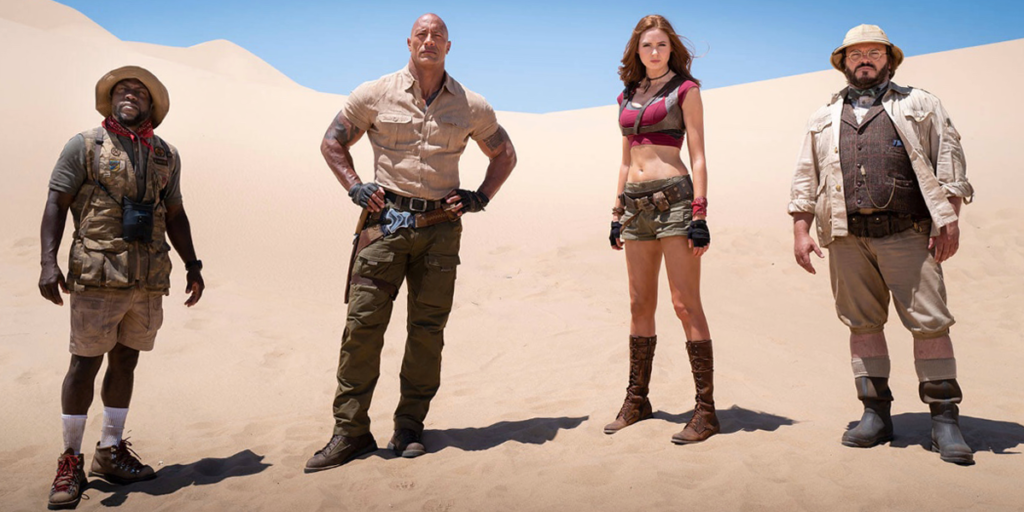 Ultimately Jumanji: The Next Level does everything a sequel (to a sequel) should do. It deepens it’s characters and continues their development and emotional journey from the first in a familiar and yet interesting enough way. The movie is filled with references to its predecessors, solid characters arcs, some great action, and sets up for another instalment that aims the series in a totally new direction or at least one more like the original, which feels fitting for both the characters involved and the franchise as a whole.