In Disney’s Aladdin’s Best Easter Eggs, we’re taking a look at the best secrets, references and cameos in Disney’s 1992 animated feature. If we missed your favourite Aladdin Easter Egg, or you want us to do another Disney Easter eggs post, let us know in the comments below… 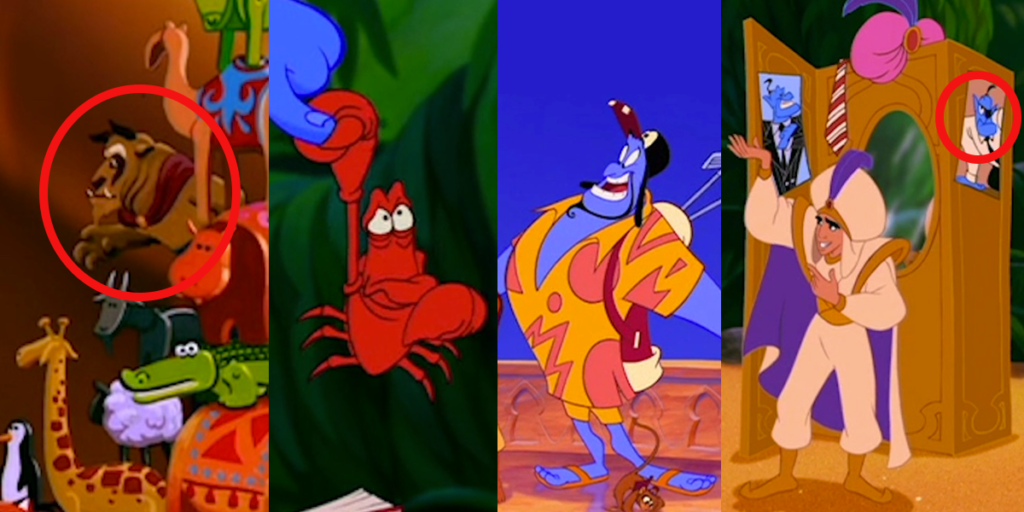 The Peddler, the character that opens the film by breaking the fourth wall and talking directly to the audience, was originally planned to be revealed as the Genie. The reveal scene was cut from the final version of the film but later confirmed by directors Musker and Clements.

The Peddler is also voiced by Robin Williams, wears a genie blue robe, has the lamp, and is the only other character than the Genie to have four fingers. As an added detail almost all of the Peddler’s lines were improvised as Williams was given random objects by the animators. 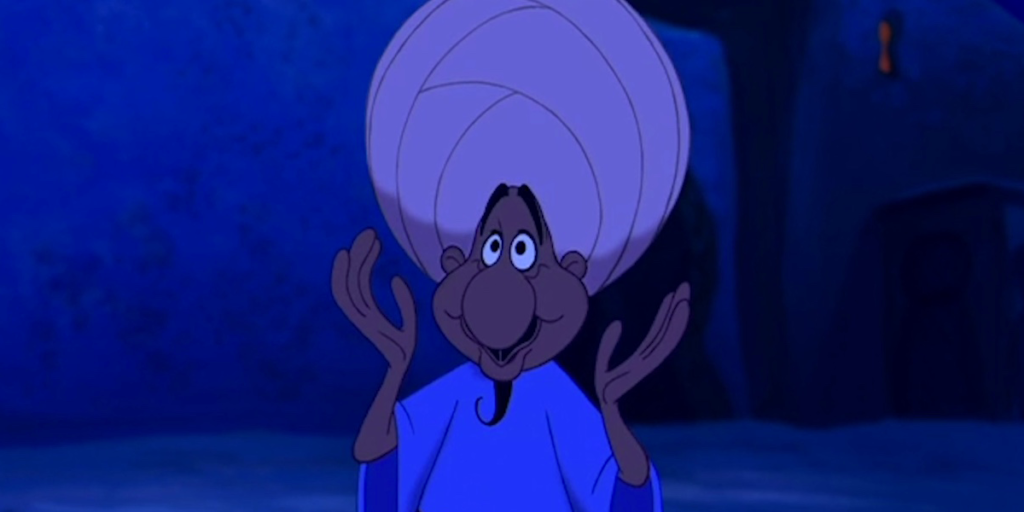 Aladdin’s directors, John Musker and Ron Clements, also headed the production on 1989’s The Little Mermaid, 1997’s Hercules, 2002’s Treasure Planet, 2009’s The Princess and the Frog, and 2016’s Moana. They have made animated cameos in several of those movies, with Aladdin being no exception. The iconic animation duo appears during the crowd that forms as Jasmine’s first on-screen suitor, Prince Achmed, arrives. 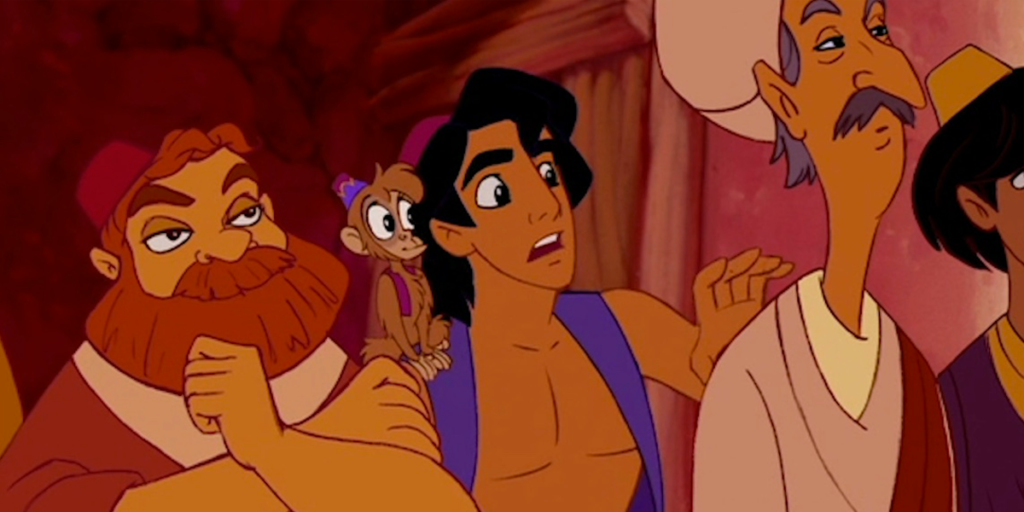 For help with Aladdin’s design animator Glen Keane, who also led animation on The Beast, Pocahontas, and Tarzan, looked to MC Hammer’s “U Can’t Touch This” music video for reference on Aladdin’s baggy pants. 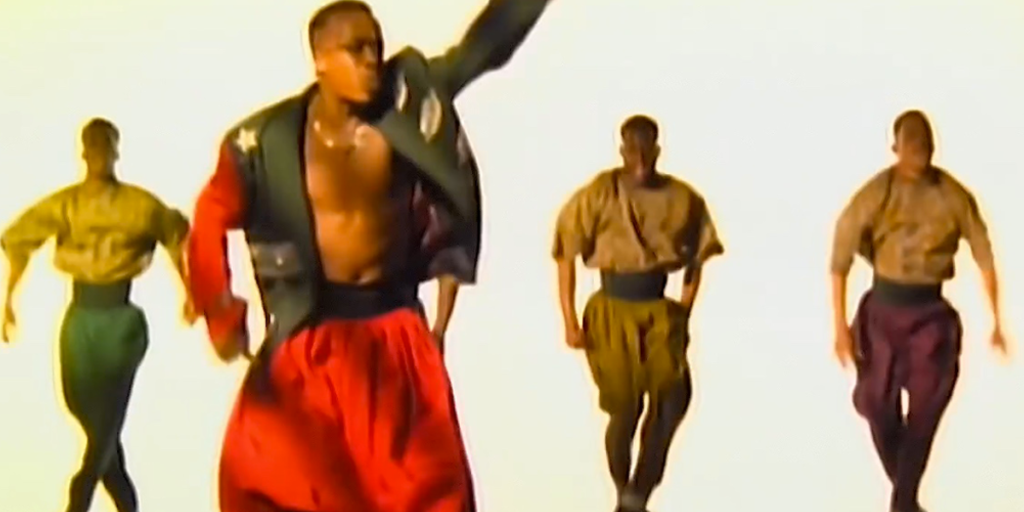 Originally the plan for the Flying Carpet was to be one of the first full CGI characters, but after some tests, the studio decided to hand animate the shape of the carpet and only use CGI for a more intricate pattern. The design is actually a reference to the events of the film and features the lamp, flames, and the Tiger Headed entrance to the cave of wonders. 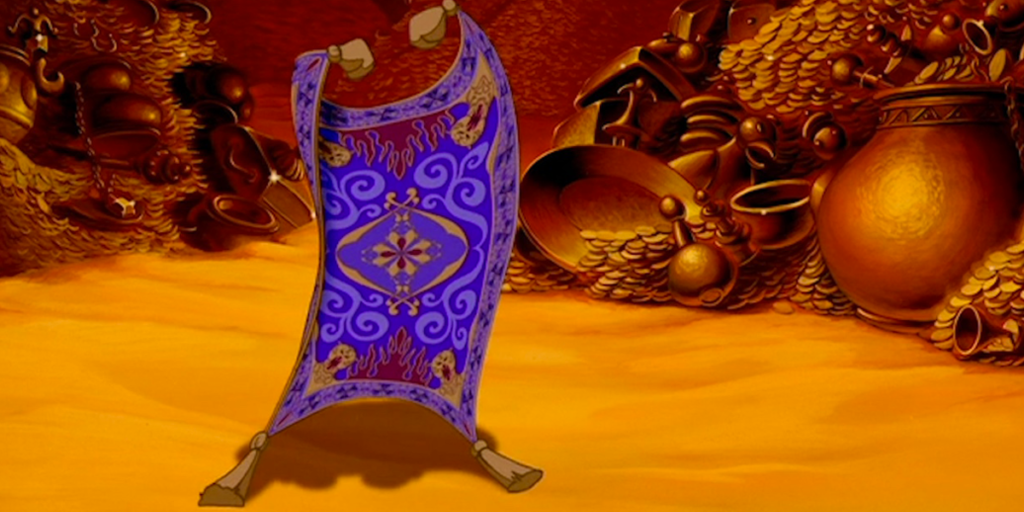 One Thousand and One Nights

Aladdin is based on the original story from the book Arabian Nights, also known as One Thousand and One Nights. During “Friend Like Me” the Genie says that “Scheherazade had a thousand tales”, each of the stories in the original collection was written with a woman named Scheherazade as the narrator. 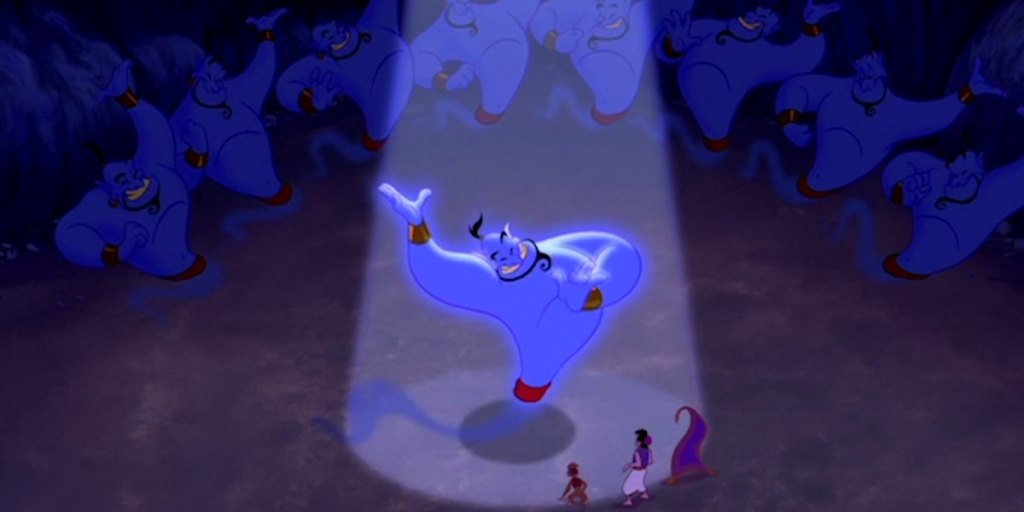 Ali Baba and the Forty Thieves

The Genie also mentions “Ali Baba and the Forty Thieves”, another story from One Thousand and One Nights, which provided the basis for the third Aladdin movie, Aladdin and the King of Thieves. 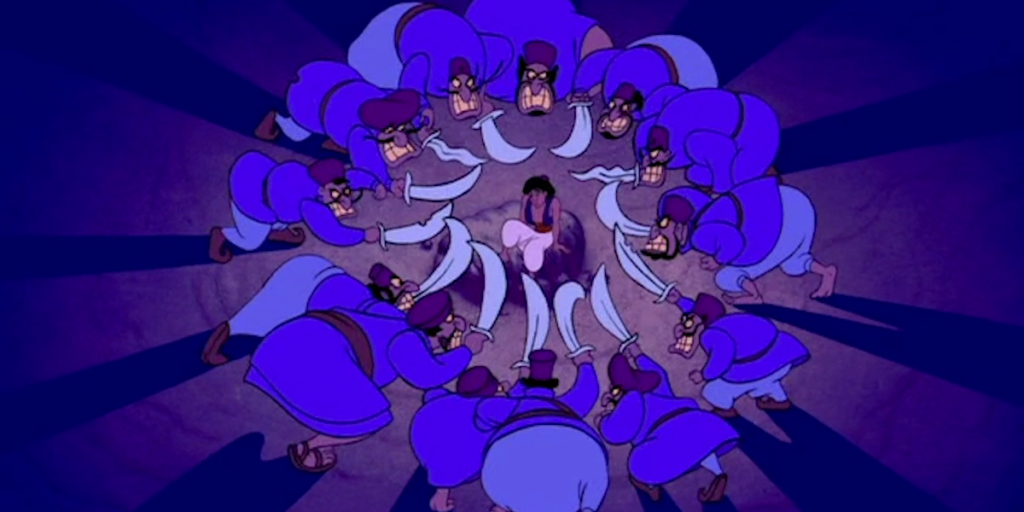 The “Applause” sign that appears above the Genie after “Friend Like Me” was to encourage audiences to get involved with the film. Before the sign, not many audience members were overly excited, whereas after it was added people applauded Friend Like Me and most songs afterwards. 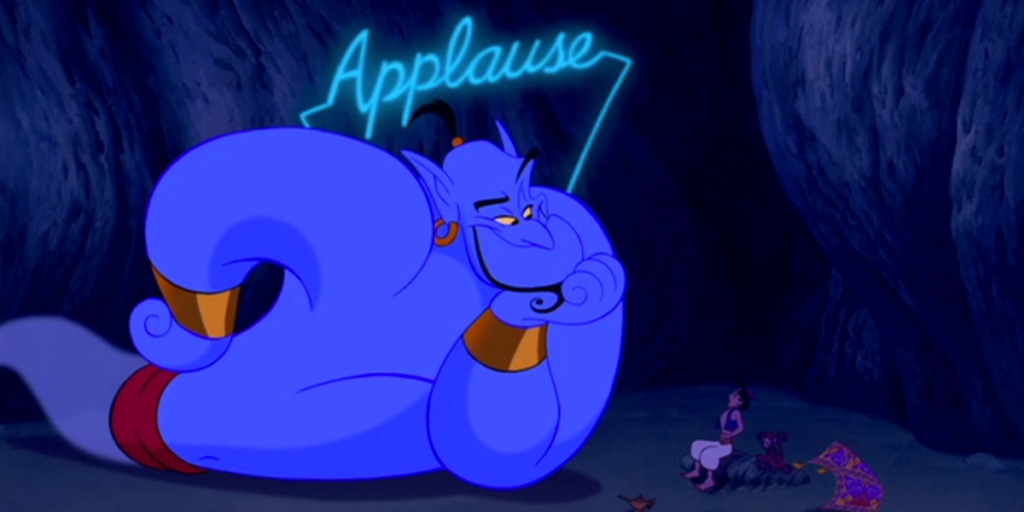 The Many (Many) impressions

Robin Williams’ incredible stand-up and improvisation skills revolutionised the animation industry and paved the way for the future of animated films. He brought a number of contemporary references, jokes, and impressions to the Genie that include Arnold Schwarzenegger, Groucho Marx, Robert De Niro, and Jack Nicholson. 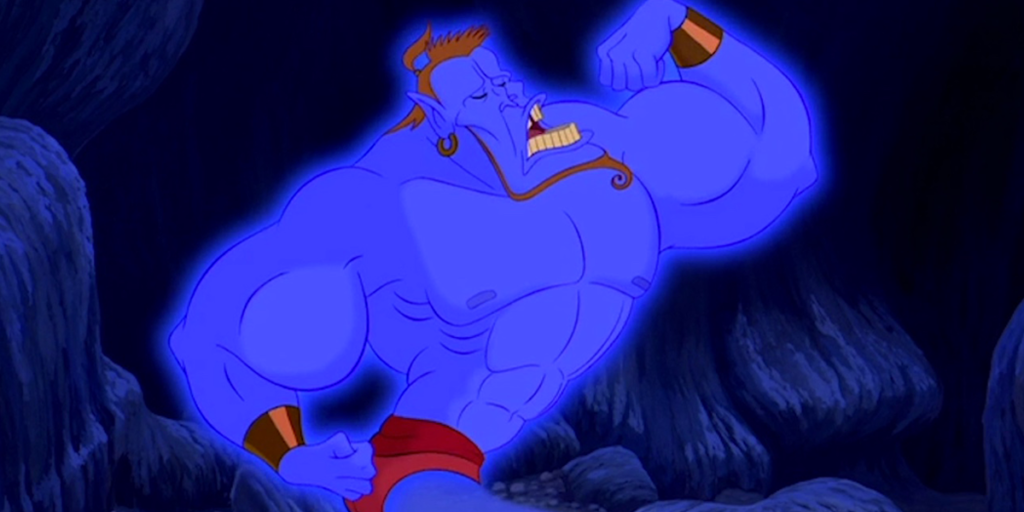 When Aladdin first says he will use his final wish to free the Genie, the Genie shows his disbelief by turning his head into Pinocchio, the exact same version seen in the Disney Classic from 1940. 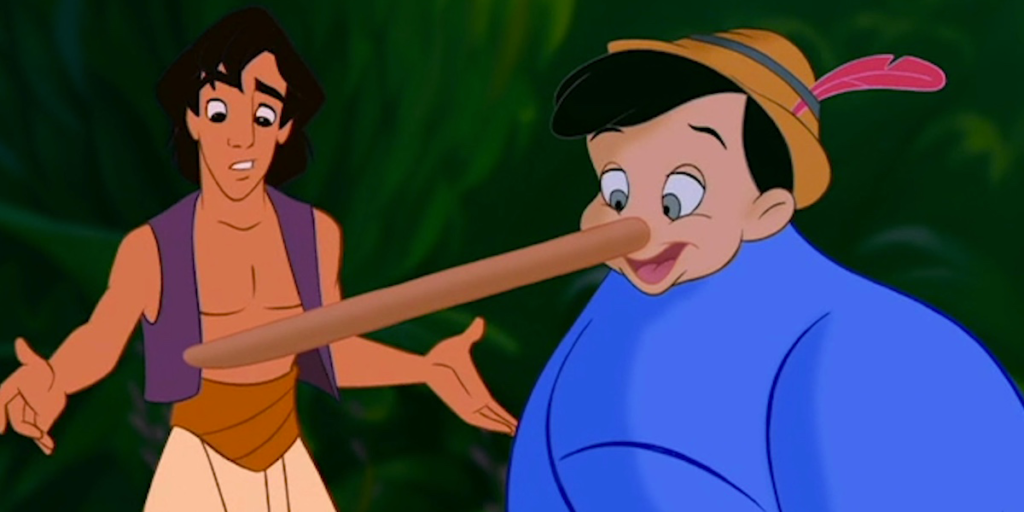 After Aladdin wishes for the Genie to make him into a prince the genie looks through a book to check how to do it. One of the first recipes he comes to is King Crab, he then pulls Sebastian the Crab from The Little Mermaid out of the book. The Little Mermaid was also directed by Ron Clements and John Musker. As Sebastian appears a brief version of “Under the Sea” can be heard. 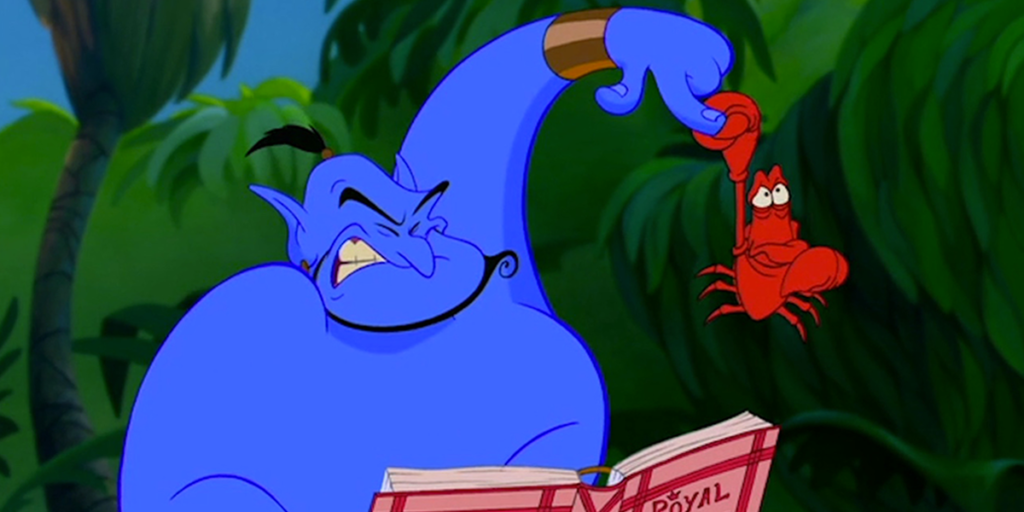 The next recipe, before the Genie gets to turning Aladdin into a prince, is a Caesar Salad. As he reads this a Roman Toga appears around the Genie and a knife welding arm attacks him from the book. He says “Et Tu, Brute?” The famous line from William Shakespeare’s play Julias Caesar, where Ceaser utters the line as Marcus Junius Brutus stabs him. 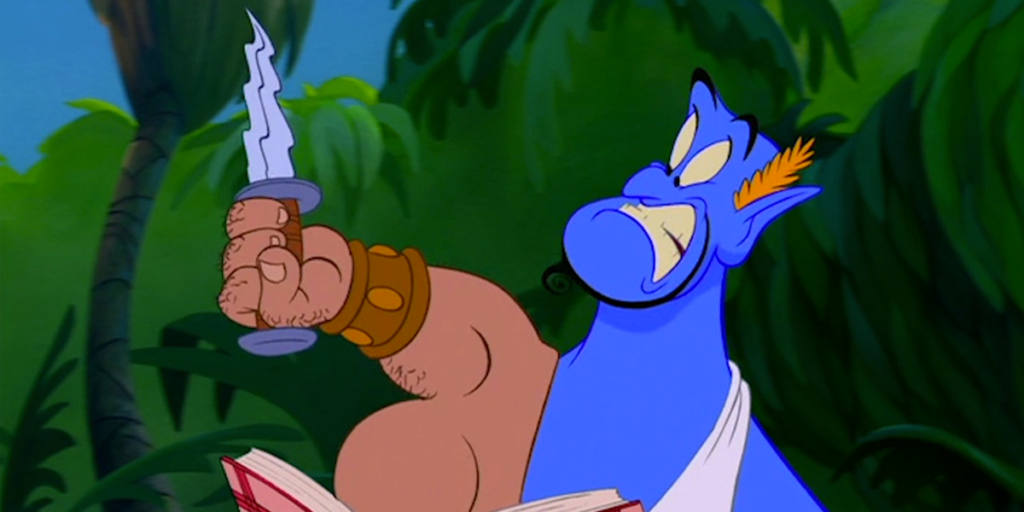 The Man in the Hathaway Shirt

As the Genie begins to restyle Aladdin as a prince, one of the pictures behind Aladdin shows the Genie with an eye patch in a side shirt and tie. This homages the famous “The Man in the Hathaway Shirt” ad campaign for the C.F. Hathaway Company. 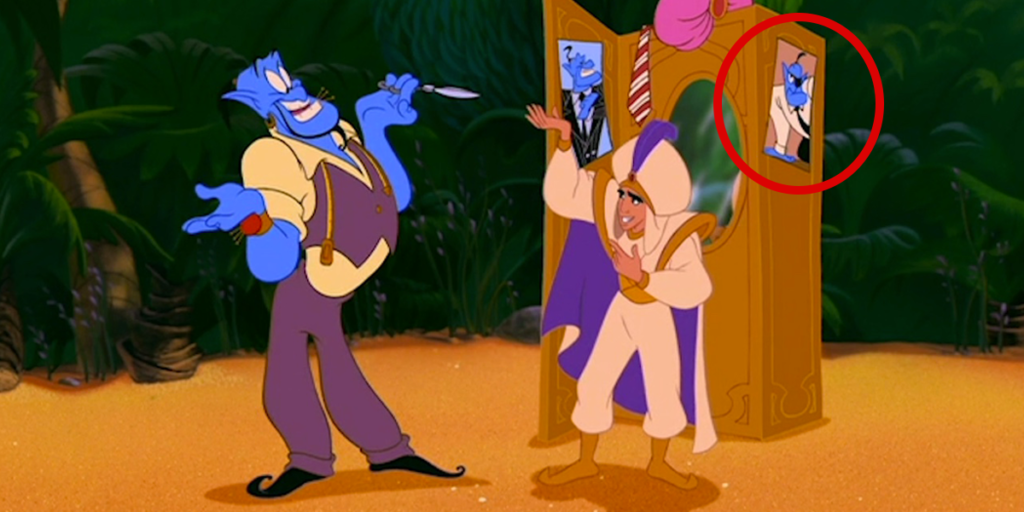 Aladdin’s monkey sidekick is named Abu. The ancient Egyptian city of Abu (now known as Aswan) was also known as Elephantine and was symbolised by a hieroglyph of an elephant. As a nod to the origins of the name Abu is fittingly turned into an Elephant during Prince Ali’s entrance to Agrabah. 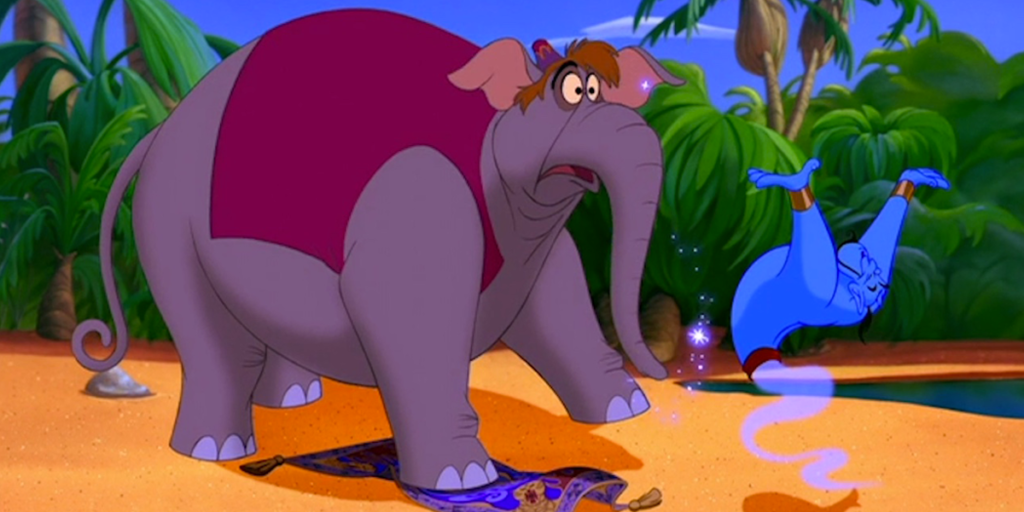 As the Sultan plays with his toys one of the Beast (from Beauty and the Beast) can be seen. Although links have been made to other animals and characters from Disney’s long history, The Beast is the only one fully confirmed by the animators. 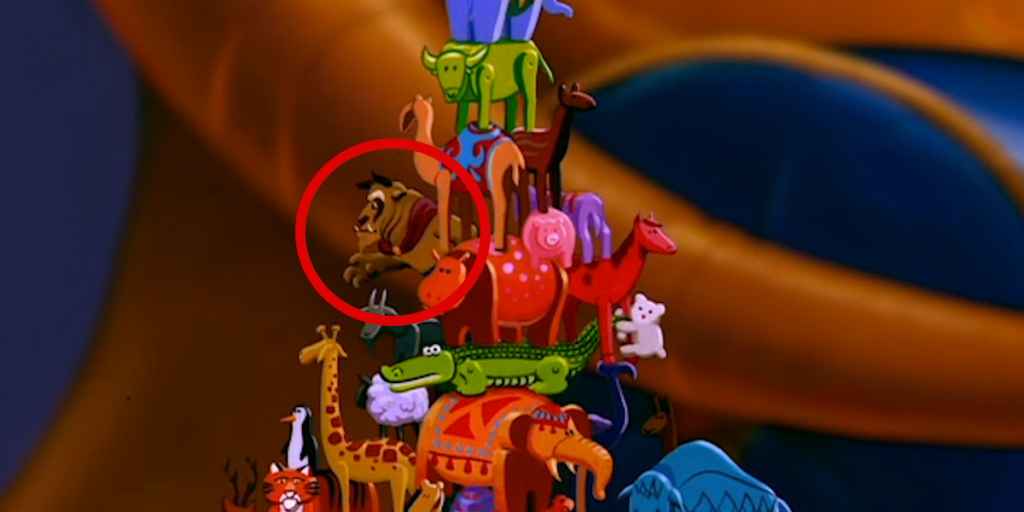 What Are you Going to Do Next?

After Aladdin finds out he will become the Sultan (and his guilt over lying to Jasmine sets in) the Genies asks “what are you going to do next?” As he says this he makes a camera frame with his hands so that the scene references the famous “I’m going to Disney World” Super Bowl Ads. Running since 1987 the iconic ads see a player from the winning team asked what they are going to do after winning, to which the answer is “I’m going to Disney World”. 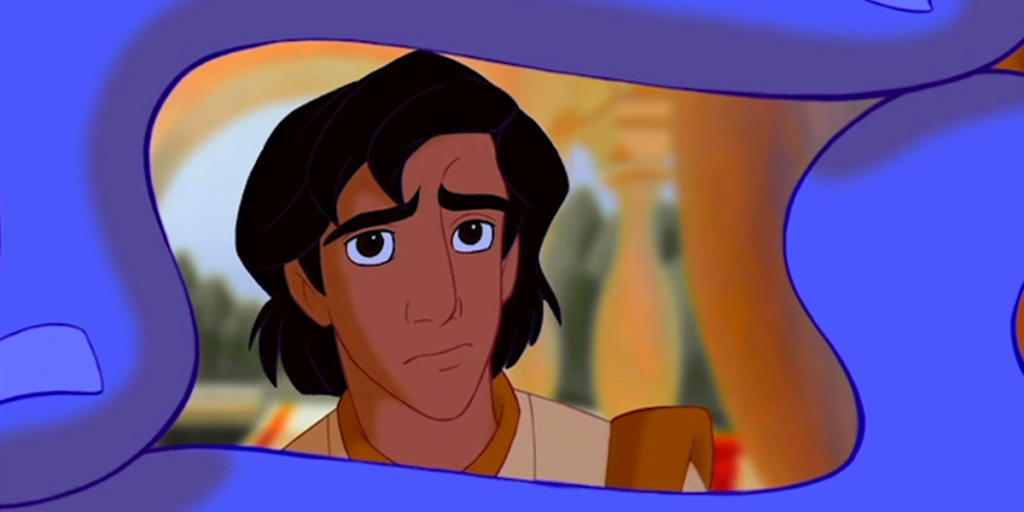 Once Aladdin frees the Genie he gets ready for his own adventures, complete with a jazzy shirt and a Disneyland goofy hat. The outfit may look like just another Disney reference or even a nod to Robin William’s real-world dress sense, but in fact, it’s both. The outfit is a recreated version of what Robin Williams was wearing in the Back to Never Land animated short from 1989 that gave a behind the scenes glimpse at the animation process (by adding a Lost boy version of robin Williams into 1953’s Peter Pan). 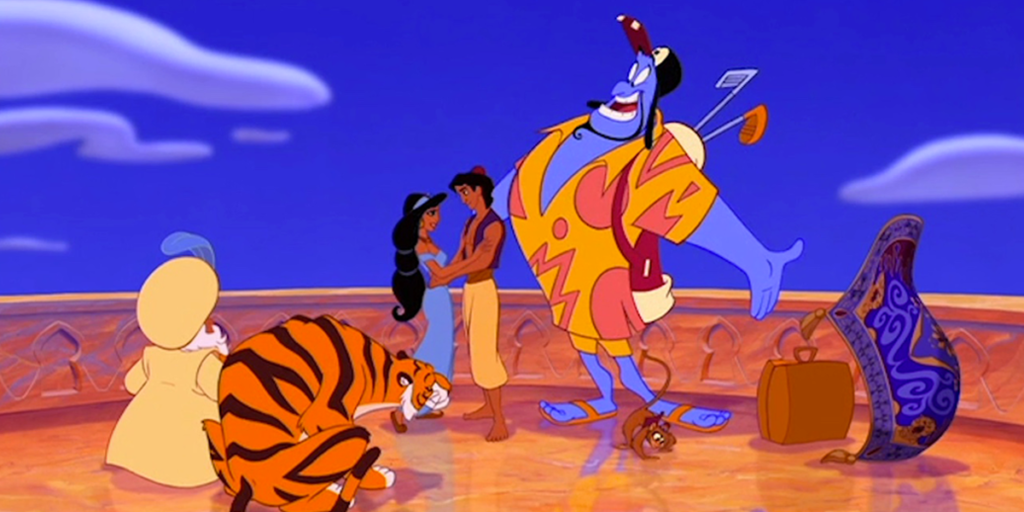 The last line of the movie (aside from Genie’s jokes over the closing credits) is the Genie saying “made you look”. This is also Robin Williams last line from Good Morning Vietnam when he says goodbye to Forrest Whitaker’s Edward Garlick (aside from his prerecorded final farewell recording). 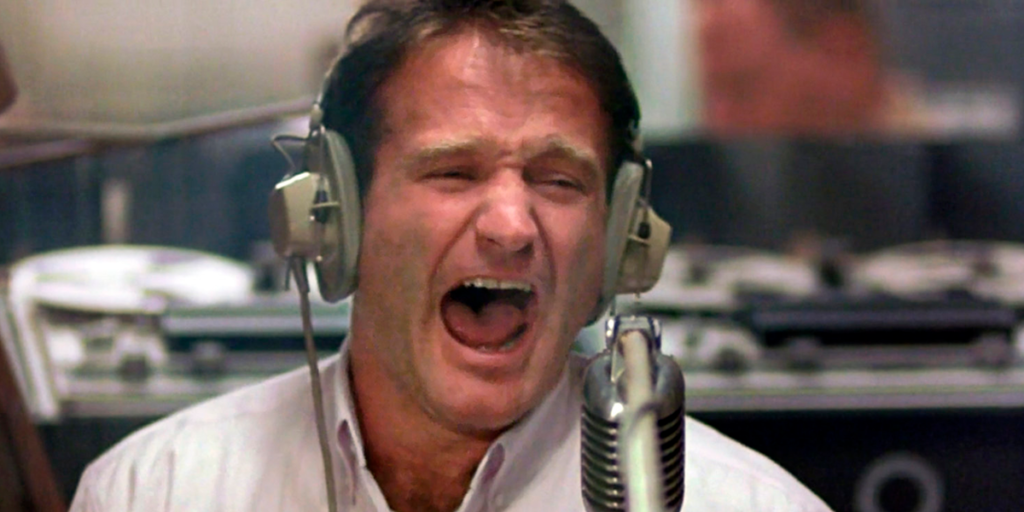 When the Genie lifts up the screen at the end of the movie the bottom right corner of the scene he lifts says BG-1454, this is the actual scene reference used for animating the movie. 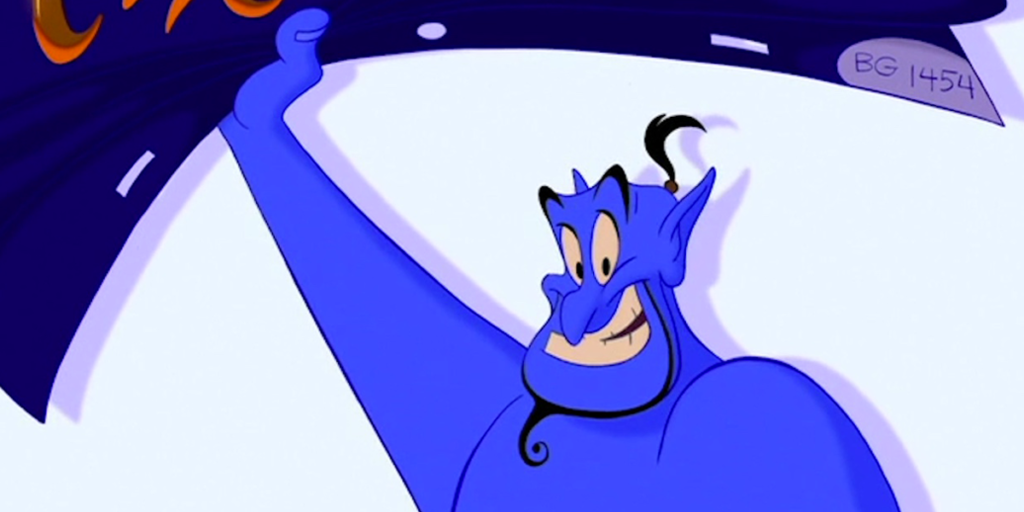 For more Disney check out our ‘The Making of’ mini-documentaries on the story behind The Lion King, Beauty and the Beast, and Aladdin or our Brief(ish) History of The Disney Rennaisance 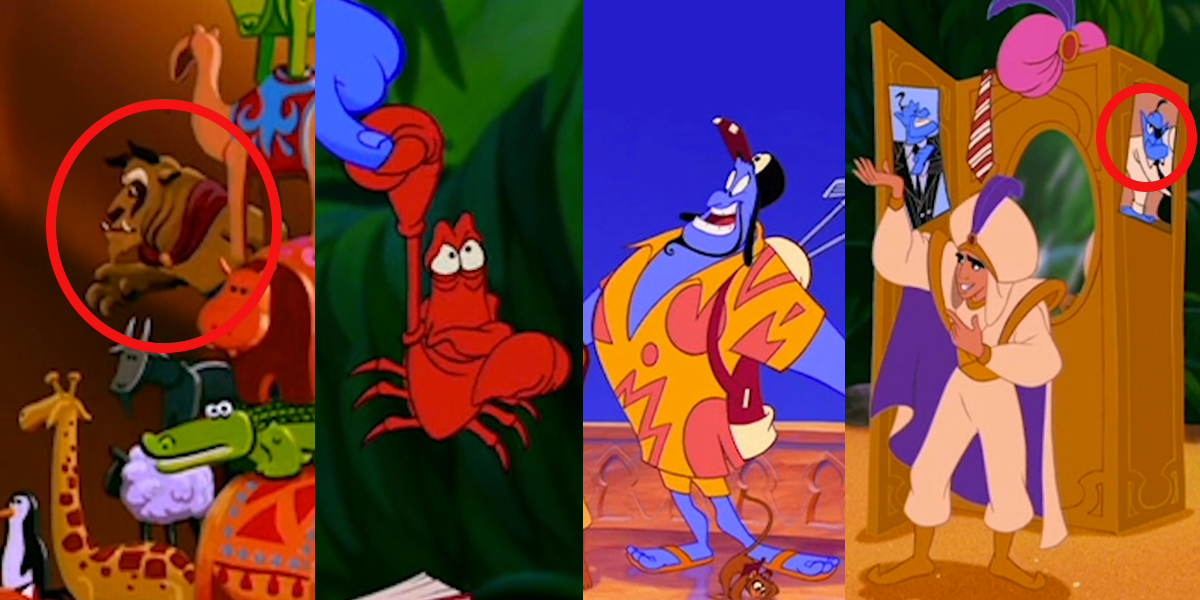