Kicking off Scott Snyder and Greg Capullo’s incredible fifty issue run on the New 52 Batman, The Night of the Owls arc manages to weave in a brand new enemy for the Caped Crusader, in the ‘Court of Owls’, an organisation that has secretly been running Gotham for decades. As an arc The Night of Owls delivers absolutely everything you need in a big Batman storyline, with cameos from almost all of the Batfamily, an off his game Batman who manages to triumph in the end, and a cleverly woven conspiracy that has the perfect balance of detective work, misdirection and reveals. 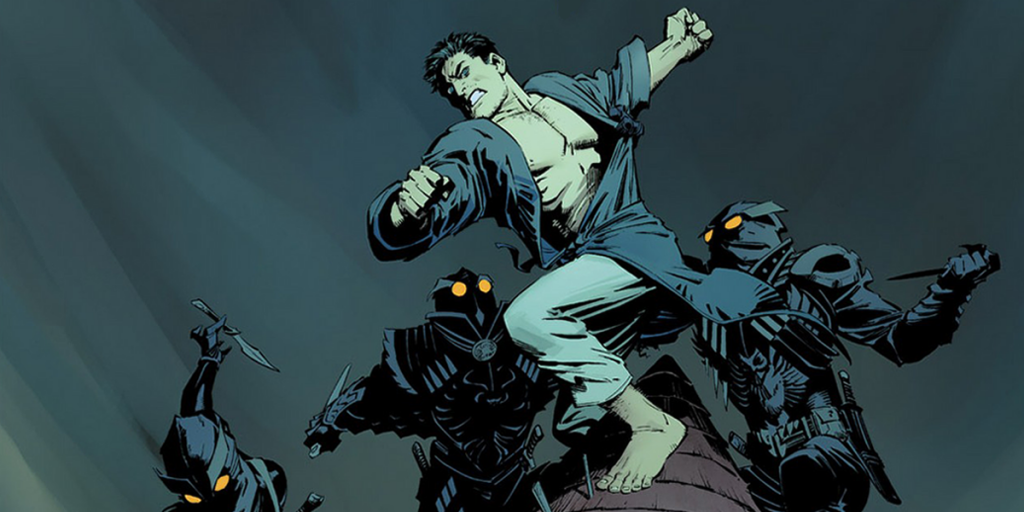 The Night of the Owls storyline is preceded by issues #2 to #7 of the New 52 Batman run, which spend most of their time introducing us to a Batman that feels he has total control over Gotham, a Bruce Wayne with big plans for citywide renovation, and teasing the existence of the mysterious organisation known as The Court of Owls.

The fabled Court of Owls are what seems to be a dictional group that y watch over Gotham, controlling and influencing it, with the help of their ‘Talon’ (a sort of henchman assassin who acts out the Courts will). A nursery rhyme instills the idea of the Court into the children of Gotham, but their actual existence is dismissed by most (especially Batman), seeing it as nothing more than a fairy tale thought up to scare the children of Gotham into doing what their parents tell them (despite the mounting evidence to the contrary).

Bruce’s staunch resistance to the Court’s existence comes from possibly his first investigation as a child, trying to prove the Court existed, and that they were behind the death of his parents. Ultimately he found nothing, and has been set on the Court being nothing more than a story ever since. 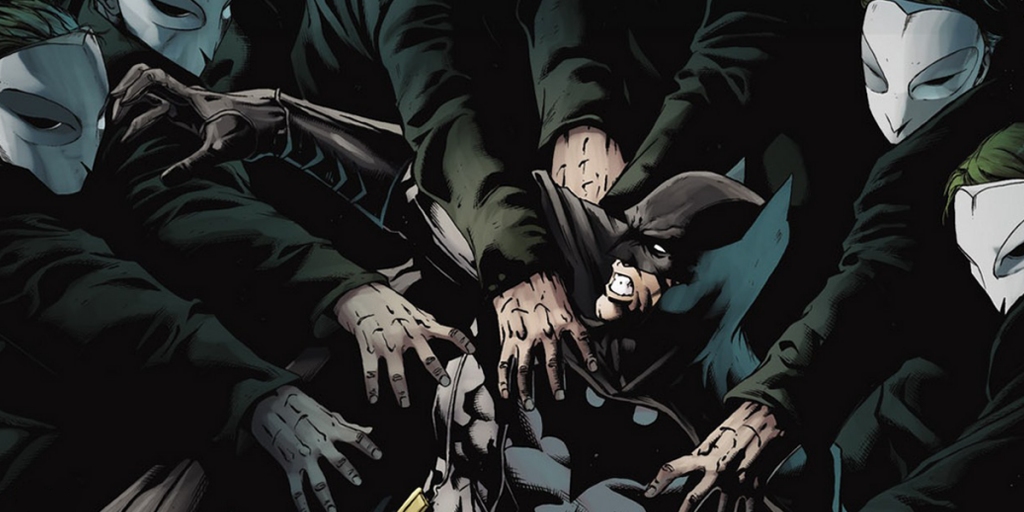 Batman #2 throws a spanner in the works for Bruce’s teas on the Court when he is attacked (as Bruce Wayne) by a Talon. The assassin claims that the Court has sentenced Bruce to death. Bruce manages to overpower the assassin, leaving the Talon to fall from Wayne Tower to his death (or so he thinks). The next few issues dig deeper into a number of clues that the Court is real and are deeply intertwined with both the Wayne and Grayson families.

Eventually Batman traces the Talon who attacked him to a secret base (or ‘nest’) on the thirteenth level of Wayne Tower, discovering that one of these nests has been placed in a new Wayne building across each decade for the past one hundred and fifty years. Batman follows the Talon’s trail into the sewers where he is again attacked, and this time forced into a giant underground maze.

Left there for over a week, being tortured and tormented by the Court of Owls, Batman finally accepts the Court has been pulling Gotham’s strings for centuries. He escapes after fully defeating the Talon, who he later discovers is William Cobb, the grandfather Dick Grayson (the first Robin, part-time Batman, and current Nightwing). Batman also realises that Dick was in line to be this generations Talon, but when his parents died and Bruce took him in it ruined the Courts plans. 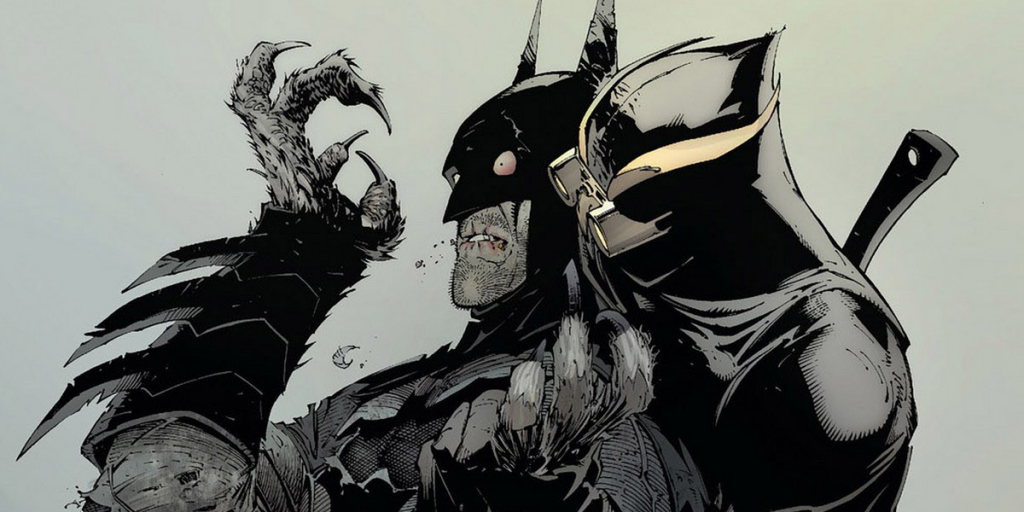 The Court of Owls wakes up all of their Talons (who are kept in a sort of undead state following their death) and releases them into Gotham, to hunt down Batman and a number of Gotham’s more influential citizens, beginning ‘The Night of Owls’.

As the Night of Owls begins a still injured Bruce recovers from his time in the maze at Wayne Manor, but the Talons attack, getting more than they anticipated with Bruce still able to hold them off. Bruce sends Alfred to the Batcave while he draws the Talons away, eventually heading to the cave himself. Once there Alfred begins decoding a data file Bruce got from one of the Talons, but the rest of the assassins converge on the cave, discovering Bruce is Batman and attacking Alfred.

Bruce and Alfred head to the Armoury, and start to decrease the temperature in the cave (in the hopes that it will stop the Talon’s regenerative powers).  Bruce realises the doors won’t hold the Talons off for long enough, and so heads out to fight the Talons in a giant mech suit. 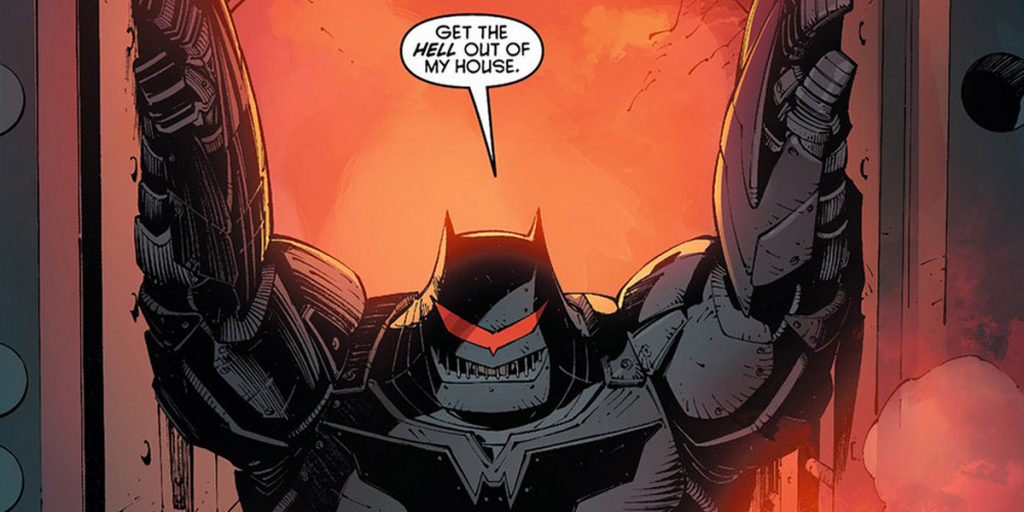 As Bruce is fighting with (and losing to) the Talons, Alfred decodes the data file, and realises it’s a hit list for a number of the most prominent and influential figures of Gotham. On Batman’s instructions Alfred puts out ‘the call’ to the Batfamily asking all of them who are in Gotham to help rescue as many people from the list as possible. This section of Batman #8, ‘The Call’, was released as a promotional short before the Night of Owls crossover event. The various Batfamily books splinter off from here, into different directions following each member trying to fight the Court and save Gotham.

Back in the Batcave the Talons eventually overpower Batman before the temperature decreases enough to stop them, but as they close in on a defeated Batman,, he remembers the story of the first Wayne’s to live in the Manor.

Bruce remember’s that Solomon and Joshua Wayne didn’t live in the house for a few years after buying it, mainly due to a large bat infestation, and to get rid of those bats they brought in owls. These owls hunted and killed all of the bats until the infestation was gone. Bruce notes how this story mirrors his own situation, with the Owls and Talons having infiltrated the cave and hunting him to near death. 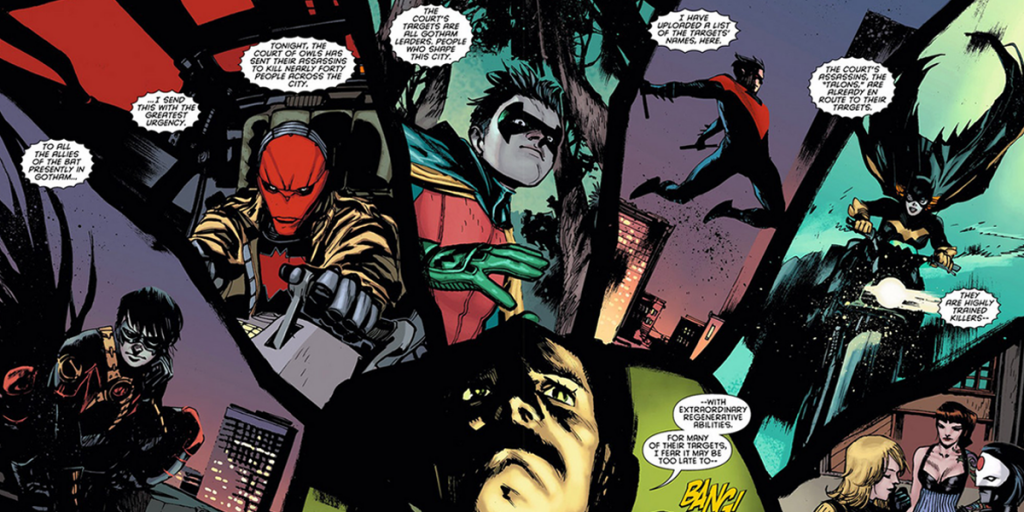 Bruce then remembers that once the owls left, the bats came back, and that they’d simply gone deeper into the cave, to a place where the owls couldn’t. Batman echoes this, and does just that, coming back from near death as the temperature drops and taking down all of the remaining Talons.

Once back on his feet, which in true Batman fashion is in a matter of seconds, he heads out into Gotham (despite Alfred’s protests). He first heads to Arkham Aslyum to save Jeremiah Arkham, defeating an escaped Black Mask and opening the cell doors of pretty much every Arkham inmate to slow down the Talon’s hunting Jeremiah.

After he rescues Arkham, Batman heads to Lincoln March, a prominent Gotham citizen hoping to work with Bruce to make the city a better place, but Bruce finds March mortally wounded by a Talon. As March dies he asks Batman to give Bruce Wayne a message, showing him some of his research on the Court of Owls. From there Batman takes a slight detour and helps Robin and Nightwing take down a recently escaped, then captured, and then ‘re-escaped’ Mr Freeze, showing off Freeze’s revamped New 52 origin story, and the crucial role Bruce Wayne played in creating the super villain. 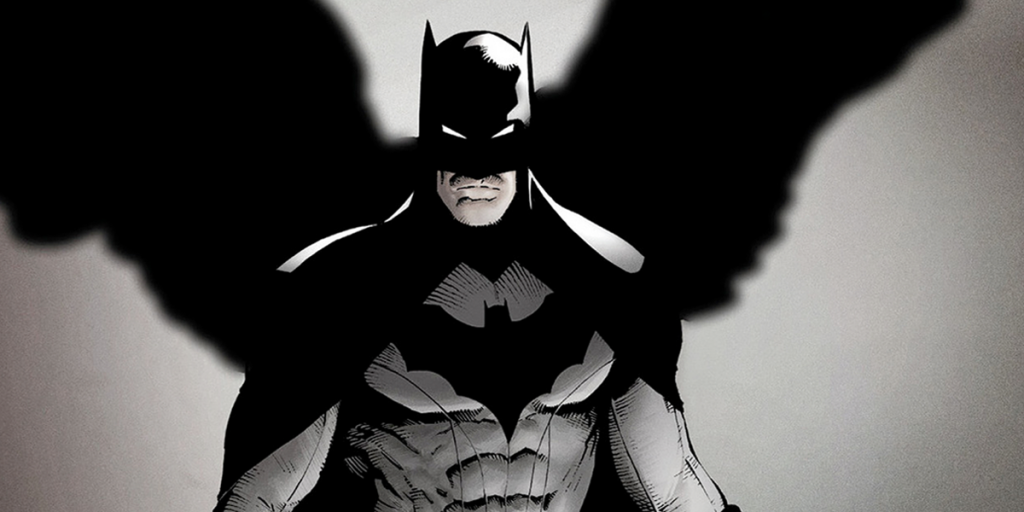 Batman then follows the names March gave him to the house had traced the Owls to as a child, he gets there thinking he is about to finally catch them in the act, but finds the entire Court dead, having seemingly committed suicide.

With the Talon’s captured and the Court (or at least the Gotham continent of what may be a much larger organisation) dead, it seems Batman’s work is done, and yet Bruce notices that something doesn’t quite fit. Eventually he realises what it is, and to an old abandoned orphanage where he finds out who was really behind the Court’s plans.

Bruce confronts a very alive Lincoln March, who reveals himself to be the ultimate Talon, and who believes he is another son of Thomas and Martha Wayne, abounded in the orphanage as a child. 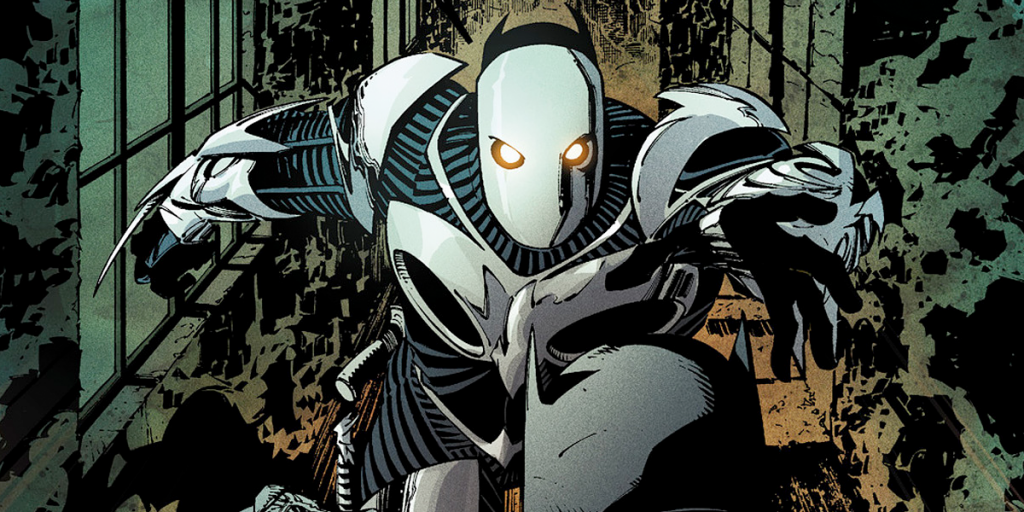 March deals some solid physical and emotional blows, providing a solid case for him actually being the brother Bruce never knew about, along with clearly overpowering an already very injured Batman. Eventually though, Batman manages to defeat March (who then disappears) leaving Bruce with a lot of questions on his parents, the Court of Owls and the true identity of Lincoln March.

With Batman following the main threat of the Court and March, it’s left to the rest of the Batfamily to deal with the various Talons attacking Gotham and it’s citizens. Nightwing’s storyline sees him embroiled with the Court of Owl’s plans perhaps more so than Batman, as it’s revealed he was to be this generations Talon, that Haly’s Circus has been a training ground for the Court for decades, and ends with him taking on his great grandfather William Cobb.

Similarly Batwing protects a Batman Incorporated fund raising and celebratory gala, Robin saves US Army General Burrows from a Talon with a vendetta, Batgirl takes down a female Talon with a harrowing backstory after a pretty brutal fight, Red Hood and the Outlaws (Red Arrow and Starfire) stop their talon from killing Mr Freeze, The Birds of Prey (Katana, Black Canary, Starling, Batgirl and Poison Ivy) chase a Talon through Gotham, and Catwoman leaves her Talon with the rest at GCPD. All Star Western #9 sees Jonah Hex taking on a Talon in the past. 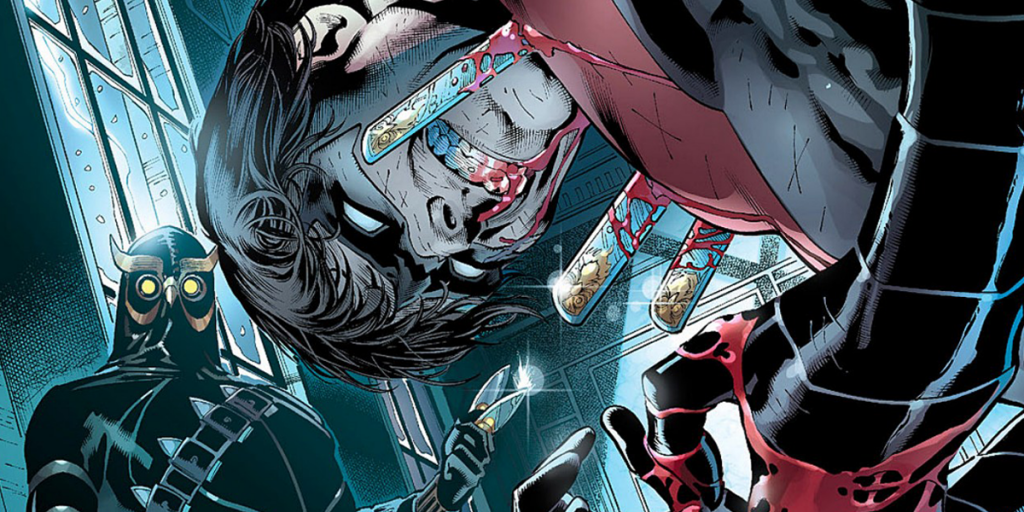 As the first Batman arc of the New 52, and start to Scott Snyder and Greg Capullo’s character defining run with the Dark Knight, The Court of Owls proves to be the perfect Batman story, starting out with an overly confident, self assured and seemingly in control Batman, and turning his world upside down, making it as hard as possible for him to win, and yet showing how he does it all same. Snyder’s uncanny understanding of what makes Batman tick, and how to tell a great Dark Knight story that blends the action, detective work and mystery combines perfectly with Cappulo’s incredible artwork, totalling to a solid start for the New 52’s Batman. 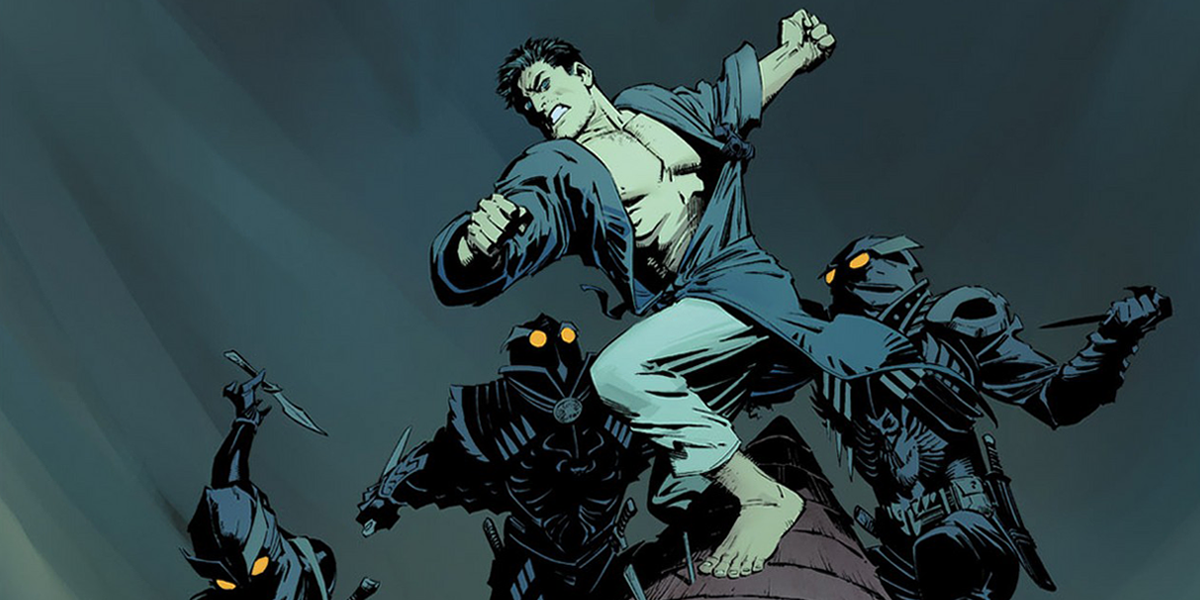 25
October 5, 2018
Previous articleThe Best Marvel Universe Locations to Visit in Marvel’s Spider-Man
Next articleWhy Assassin’s Creed: Odyssey is the Best in the Franchise (So Far…)