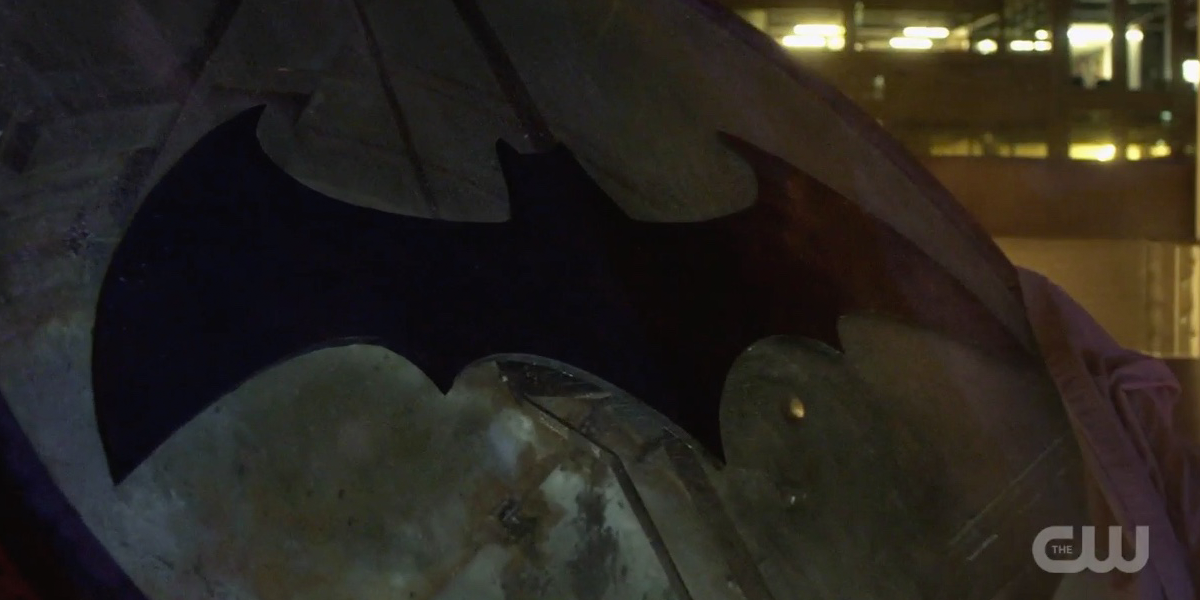 All of the Batman References in Elseworlds

With a number of references to Batman and his world cropping up in the Arrowverse over the years, the Elseworld’s crossover takes this to new heights, with all out discussions of Bruce Wayne, Batman, the Bat-Signal, and a number of more subtle references to a number of Bat-villains.

As a landmark of Gotham City, Wayne Tower is a must for any version of the city. The tower and Wayne Enterprises along with it, play an interesting role in the Elseworlds crossover, acting as the base for Kate Kane, as well as showcasing that both Batman and Bruce Wayne are missing in the Arrowverse’s Earth 1 – with Wayne Tower being almost completely abandoned and disused. 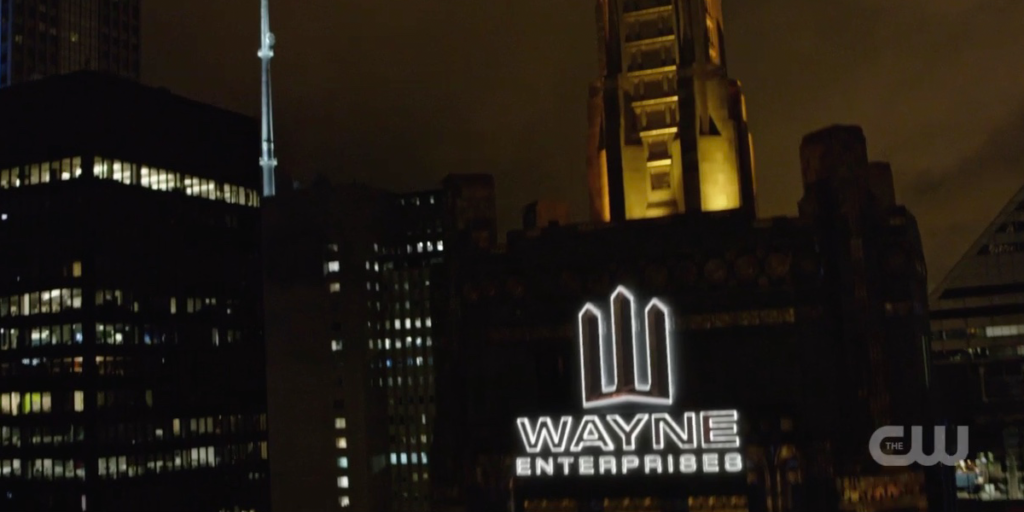 Any appearance of Gotham in the Arrowverse was sure to include the most famous supervillian prison; Arkham Asylum. Starting out with a shot fans have seen a number of times throughout tv, movies and comics the infamous Arkham Gates headed with the gothic style signage. The sequence goes on to showcase everything you’d expect from an Arkham scene including a creepy secret part of the asylum, a prisoner breakout and lots (and lots) of Batman references. 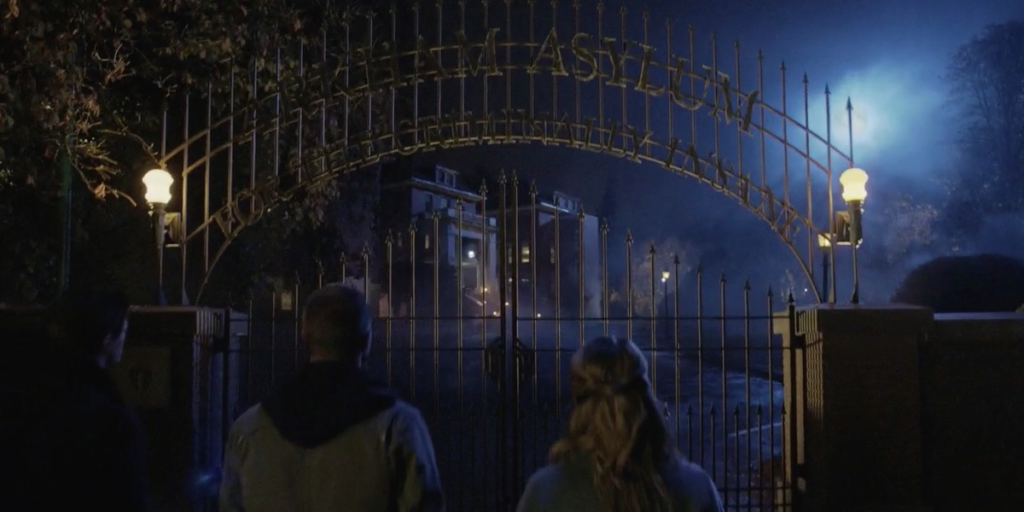 Pamela Isley, better known as Poison Ivy, has a long history as one of Batman’s most notorious villains, originally debuting in 1966, the character has gone on to become best friends with Harley Quinn and outline herself as less of a generic villain, and instead one who will do anything to protect the plant life of Earth. 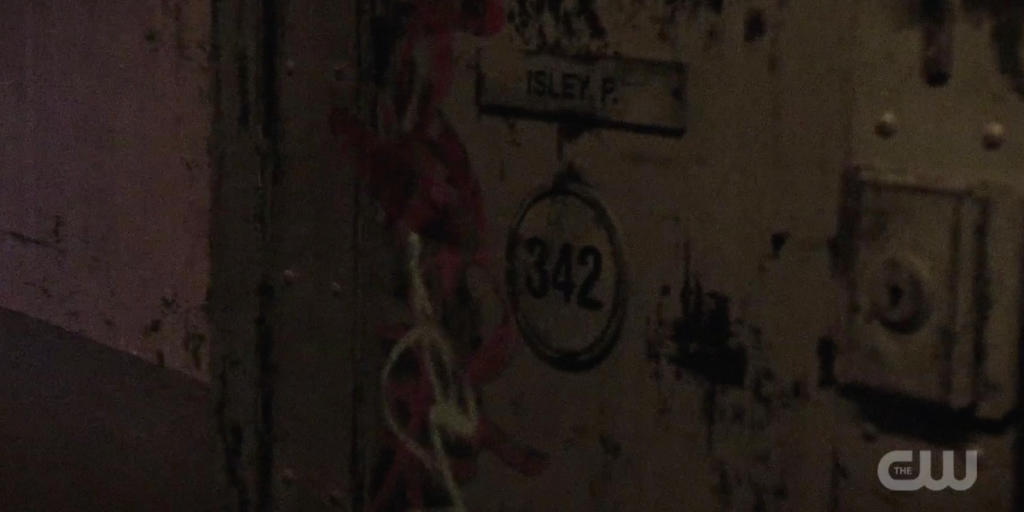 Ivy doesn’t get a huge nod in the crossover, but we do see that her name is on one of the cell doors, as well as number of vines throughout the Asylum.

The Riddler is one of Batman’s best known enemies, and has been a hugely prominent villain in the comics for decades, stars in Fox’s Gotham, and was played by Jim Carey in 1995’s Batman Forever. Edward Nigma again doesn’t have a huge reference in Elseworlds, but his name is clearly marked alongside Poison Ivy on one of the cells. 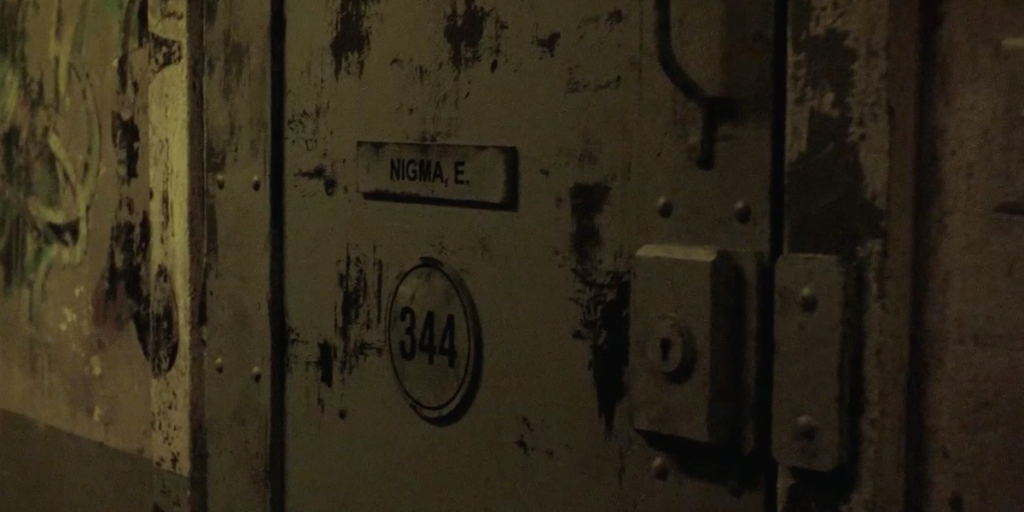 Clayface has had perhaps the most incarnations of Batman’s villains over the years, but the original was Basil Karlo, an ageing (or unsuccessful, deepening on the version) actor who once played the character Clayface in a movie. 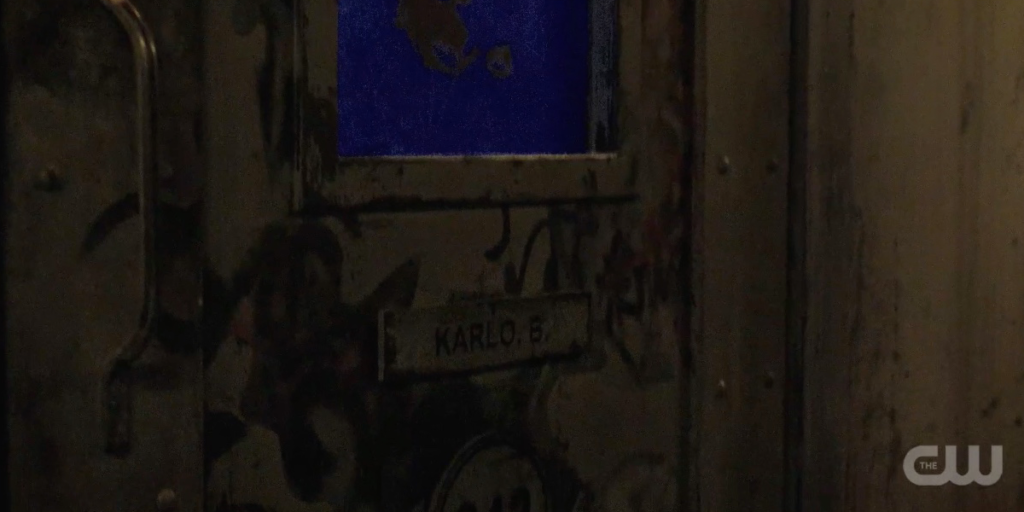 After reprising his role as a real life criminal, eventually Clayface gains real powers. With a number of iconic storylines and even turning into one of Batman’s allies during DC’s Rebirth reboot. The reference to Basil is small, and is another of the names we see on a cell door in the Asylum.

The Penguin reference is another small and subtle one, but we do see that the crime boss and weapons smuggler is currently held at the Asylum, no doubt thanks to a past confrontation with either Batman or Batwoman. 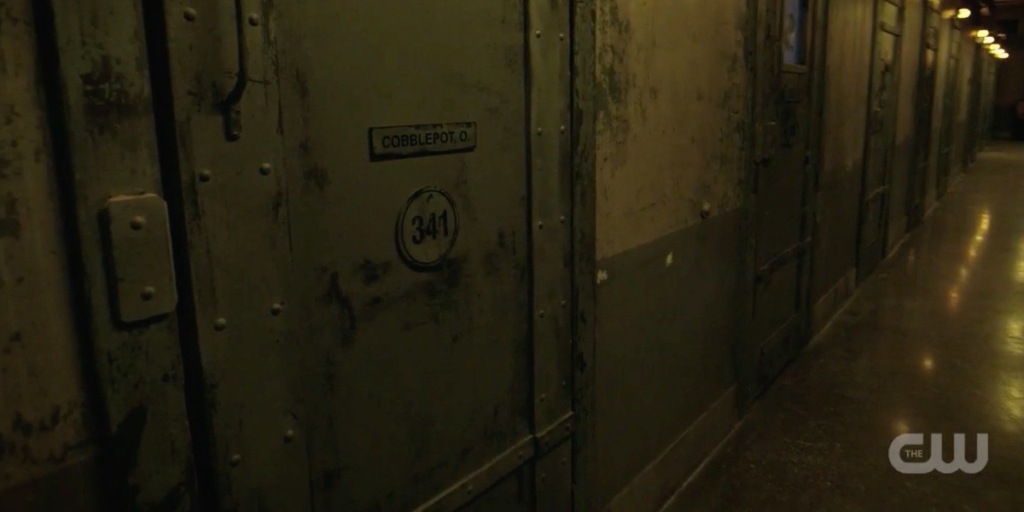 A somewhat frequent inmate of Arkham Asylum, Captain Boomerang, who is primarily a Flash villain, but has appeared in Gotham numerous times, and features regularly as a part of Task Force X, better known as the Suicide Squad. 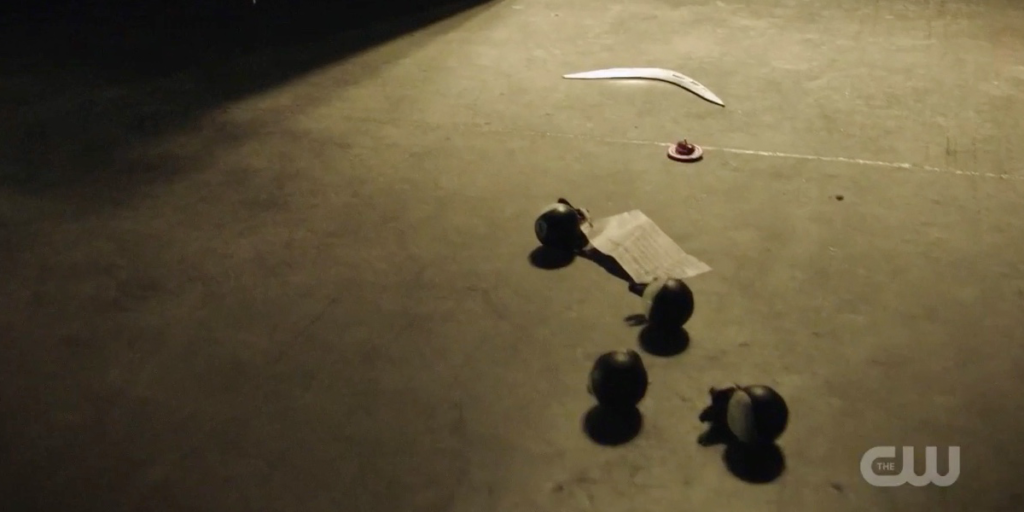 In the Arrowverse, Captain Boomerang is dead, following numerous confrontations with both Team Arrow and Team Flash, even being imprisoned on Lian Yu. It does appear however that Digger Harkness spent some time at the Asylum, with one of his Boomerangs visible in the storage roomed filled with a number of Bat-Villain artefacts. Interestingly just before the Boomerang there are some grenades that could either be another reference to someone like Penguin, or even a very vague hint at the Joker, although it’s not too clear either way.

The primary drive of Batman villain Mr. Freeze, the alias of Victor Fries, is to heal his cryogenically ‘frozen’ wife from an incurable disease. In the Arrowverse however, Noras Fries, appears to be cured, or is at the very least not frozen and is in fact a patient (or inmate) at Arkham. 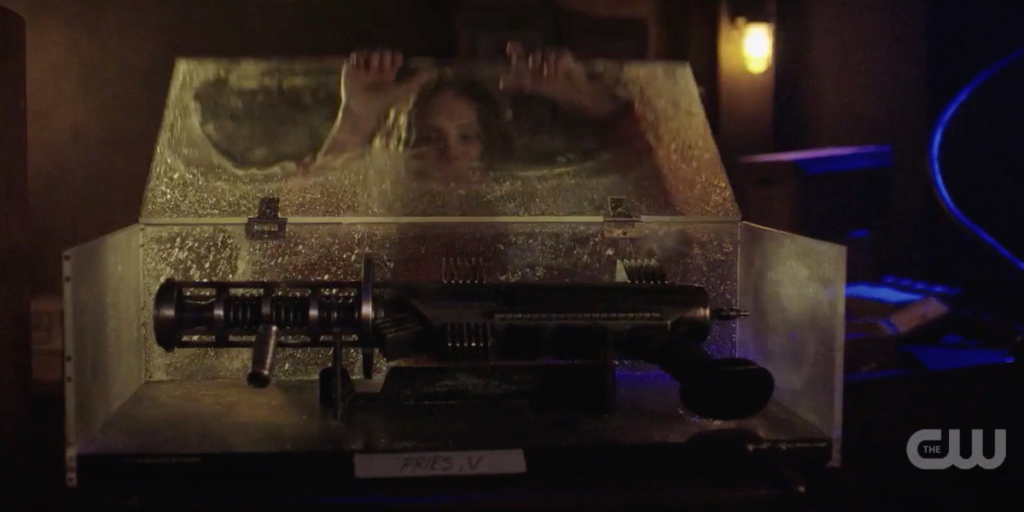 During Deegan’s breakout, Nora escapes and mangoes to find her husbands Freeze gun (in the process confirming Mr. Freeze as an active villain in the Arrowverse), and uses it to attack Caitlin Snow.  As a double easter egg Nora is played by Cassandra Jean-Amell, the real life wife of Arrow star Stephen Amell.

One of the more plot orientated Bat-Villain easter eggs is the Scarecrow’s fear gas. As Batman fans know Scarecrow’s fear toxin causes the victim to hallucinate some of their greatest fears. 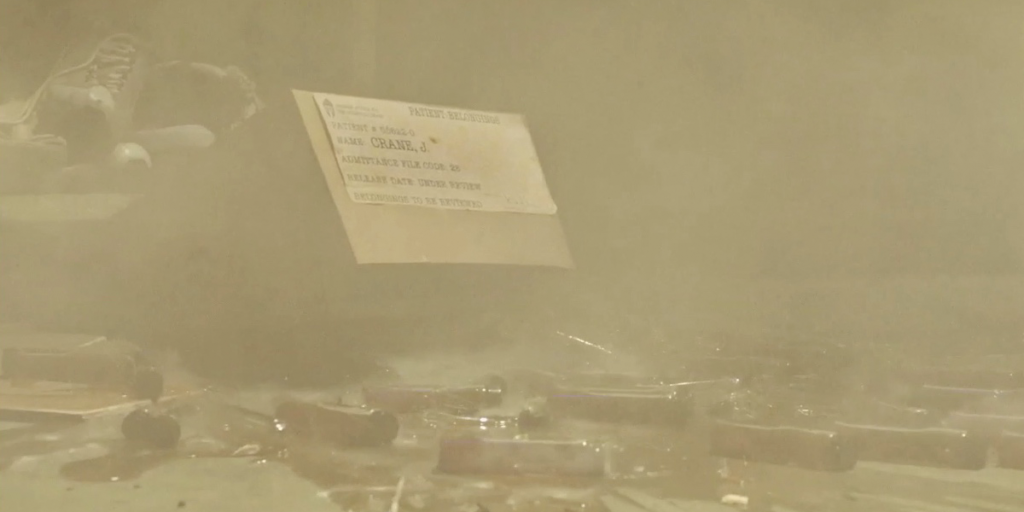 During the fight with Nora Fries, Oliver/Barry accidentally knocks over a box filled with the toxin, marked up as the property of ‘Crane, J’, aka Jonathan Crane, the secret identity of the Scarecrow. The gas goes on to make both Barry and Oliver imagine they are fighting Reverse Flash and Malcolm Merlyn respectively, whilst they are actually fighting each other.

Another reference to a better known Bat-villain is the very quick shot of Bane’s mask in Arkham Asylum. Just before Nora Fries manages to assemble the Freeze gun and attack Caitlin/Killer Frost we see Bane’s mask sitting on a bust in amongst the other artefacts. 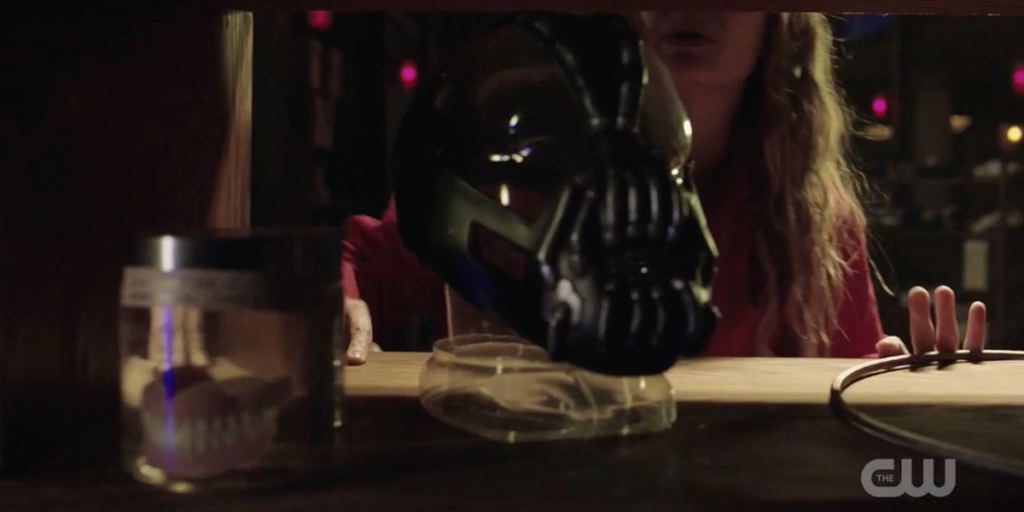 This isn’t a new design for the mask, but is instead pretty much the exact same one that we see Tom Hardy don in Cristopher Nolan’s Dark Knight Rises.

The Whereabouts of Bruce Wayne

With a number of smaller references to Batman and his world in the Arrowverse over the years, with Bruce Wayne himself being name dropped by Oliver Queen during one of his mayoral press conferences, but Batman’s alter ego has primarily been absent, almost obviously so, from this version of the DC Universe. 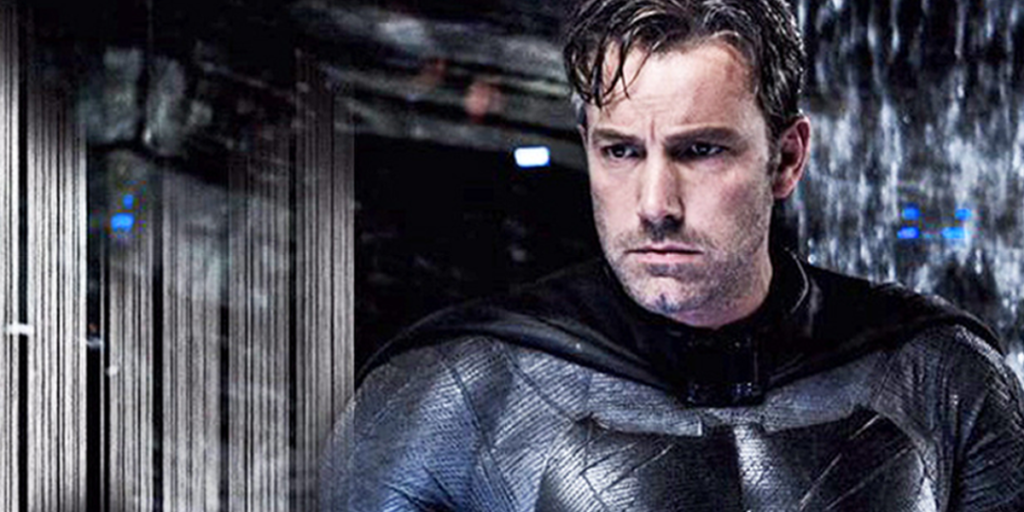 In a nutshell, it seems that his crusade as Batman finally got the better of him, and he mysteriously disappeared after Gotham ceased to improve under his protection, since then Batman’s existence has dipped into that of rumour, with even Oliver Queen denying he exists.

One of the biggest reveals from Elseworlds was that Batwoman (and presumably Batman) exist in the Arrowverse’s Earth 1. The crossover debuts Ruby Rose as the first live action Kate Kane, in a small role (with only a few scenes), but manages to establish her well enough for her own upcoming show. 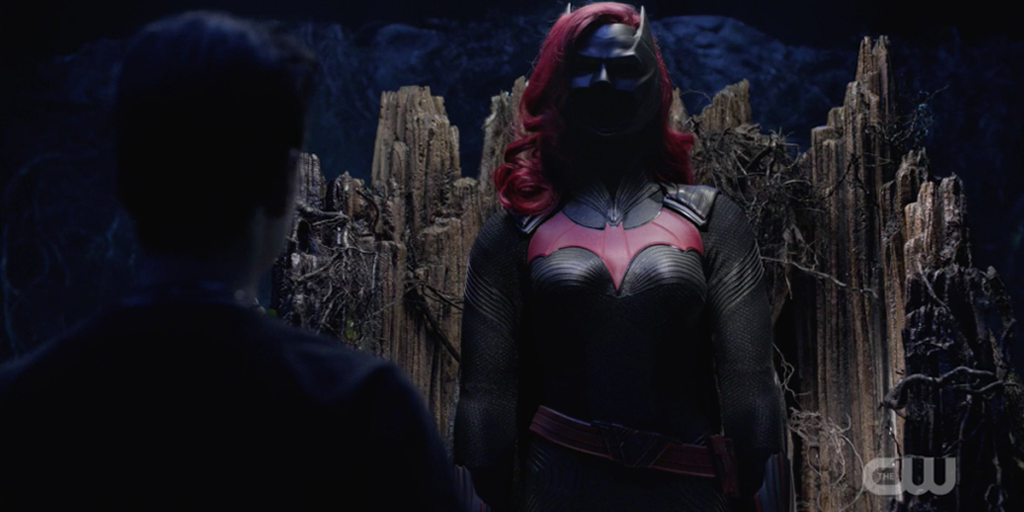 Furthering the idea that Batman really has been a part of the Arrowverse’s Earth 1 all along, upon arriving in Gotham, and Oliver claiming that Batman is a myth, Barry unveils a clearly old and out of use Bat-Signal. This version of the signal sports the more classic Bat logo scene for the longest time in the comics and used in the 89’ Batman movie. 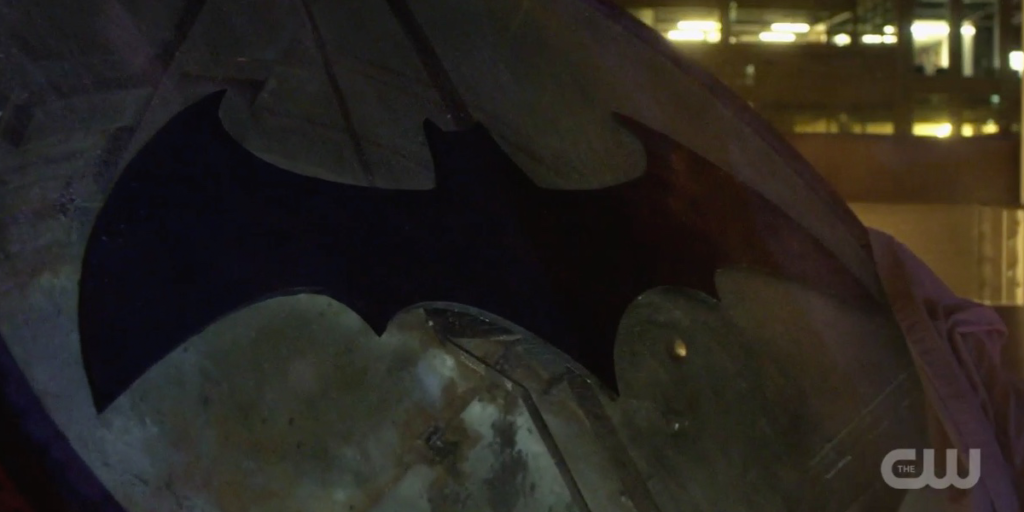 With Oliver, Barry, and Kara using Wayne Tower as a base of operations while they work out their plan of attack against Deegan. Ruby Rose’s Kate Kane seems keen to help the trio, and even offers them the WiFi password which is of course ‘Alfred’ – one of the more obvious references to Batman’s world. 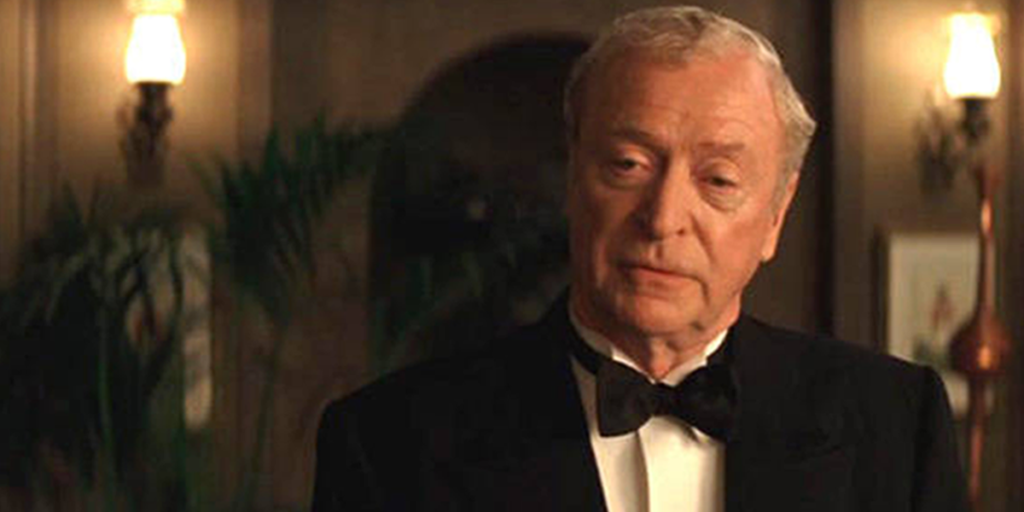