Watch Dogs: Legion undeniably follows the traditional Ubisoft formula and arguably doesn’t take its political commentary far enough, and yet the immersive map of London, play as anyone mechanic, and interesting story do more than enough to set it apart as a good game and the best Watch Dogs entry so far. 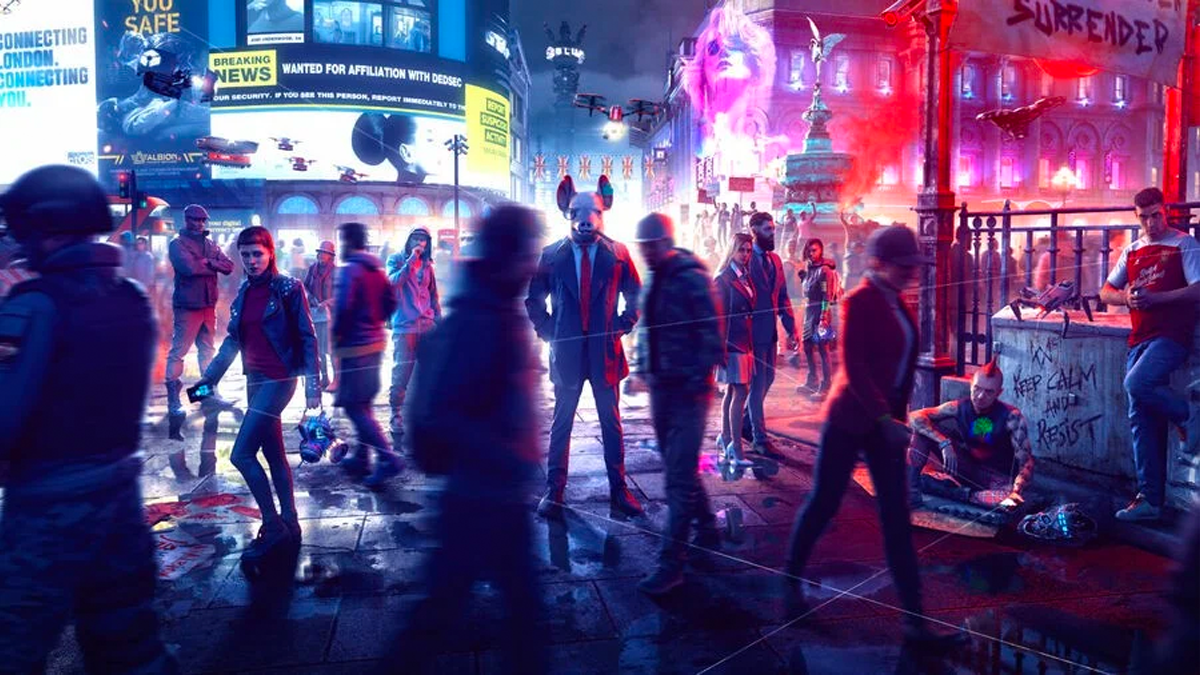 Watch Dogs has been one of Ubisoft’s more surprising franchises, mainly as it’s still going. And that isn’t meant as a dig at the series, I enjoyed both previous games. But there is no denying it hasn’t had the cultural impact or sales numbers to match Ubisoft’s other big franchises like Assassin’s Creed, Far Cry, and the many Tom Clancy series. In fact going into Legion, it feels like the third game will be a make or break for the franchise going forward.

Like both previous Watch Dogs games, Watch Dogs: Legion follows the exploits of the hacker group DeadSec as they try to take on the technological tyranny of a company called Blume. Where the first two games explored Chicago, and then San Francisco, the third takes players to London.

The story itself follows a few main characters but this time revolves around the idea that the player can recruit any other person they see in the game, and so the band of available team members can constantly shift and change. In terms of an overarching narrative, the game is set in a London of the near future where a private security firm, Albion, have taken over (using Blumne technology) and DeadSec are fighting against them. 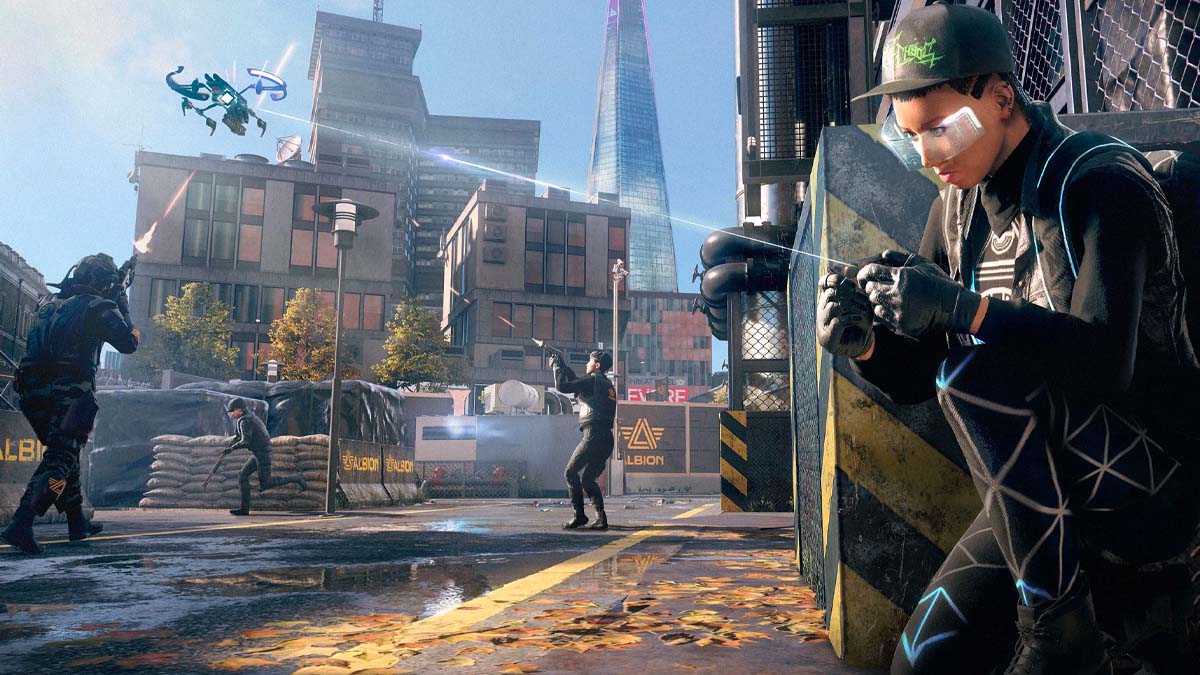 The main plot is filled with political ideas and messages on the dangers of social media, the attitude towards immigration and the social problems the post-Brexit UK could face. Although they are all clear throughout, they perhaps aren’t fully delivered, and in the end, really does just come down to the bad guys manipulating the social narrative and exploiting people and the good guys stopping them.

In terms of gameplay, there is no denying that the game follows the classic formula of many Ubisoft open-world third-person action-adventure games. And yet there are several improvements and lots of streamlining from previous games in the series, that help set Legion apart.

One of the most obvious is the lack of an interactive phone. Both of the previous games allowed the player to access their phone at almost any point where they could order cars, play music, track objectives, and accept missions. Instead Legion distils the gameplay down to a more traditional route removing this completely and simply having missions pop up and numerous cars available. 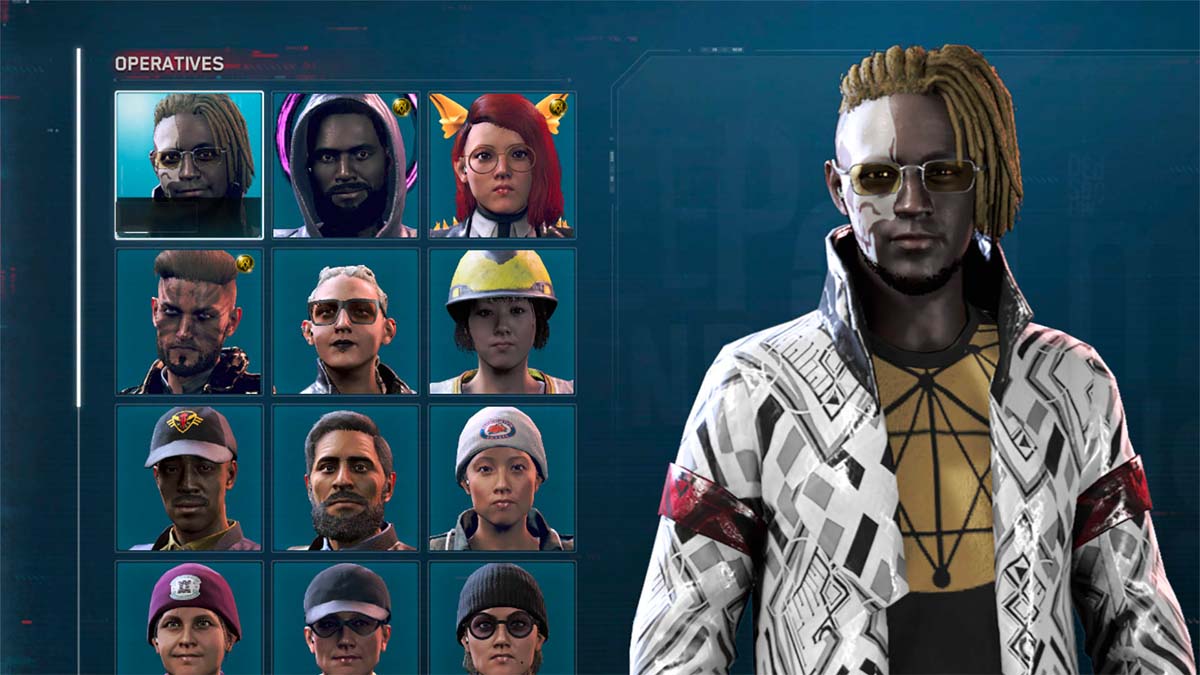 Like other Ubisoft games, aside from the story, the core gameplay revolves around unlocking and freeing different areas of the map, in this case causing different boroughs of London to rise up against Albion. Each sector has multiple missions that show DeadSec stopping propaganda, freeing prisoners, exposing evidence and other friendly hacker collective things, totalling to a mini-mission that completely frees the area from Albion influence (at least on the map, although little changes in the game itself).

The gadgets available include a miniature remote control spider-bot, various drones, an invisibility cloak, electrified knuckle dusters, all of which alter the gameplay albeit only slightly tailoring it to a specific style. Much of the core mechanics are universal regardless of character type or gadgets and weapons.

But what the game lacks in its uniqueness, it more than makes up for with its “play as anyone mechanic”. On the face of it, recruiting and then playing as any other character you can meet may seem like a gimmick, and in all honesty, almost every character plays extremely similar to one another. And yet, in reality, the system is intricate, ingenious and really the key to what makes Watch Dogs: Legion so much fun. 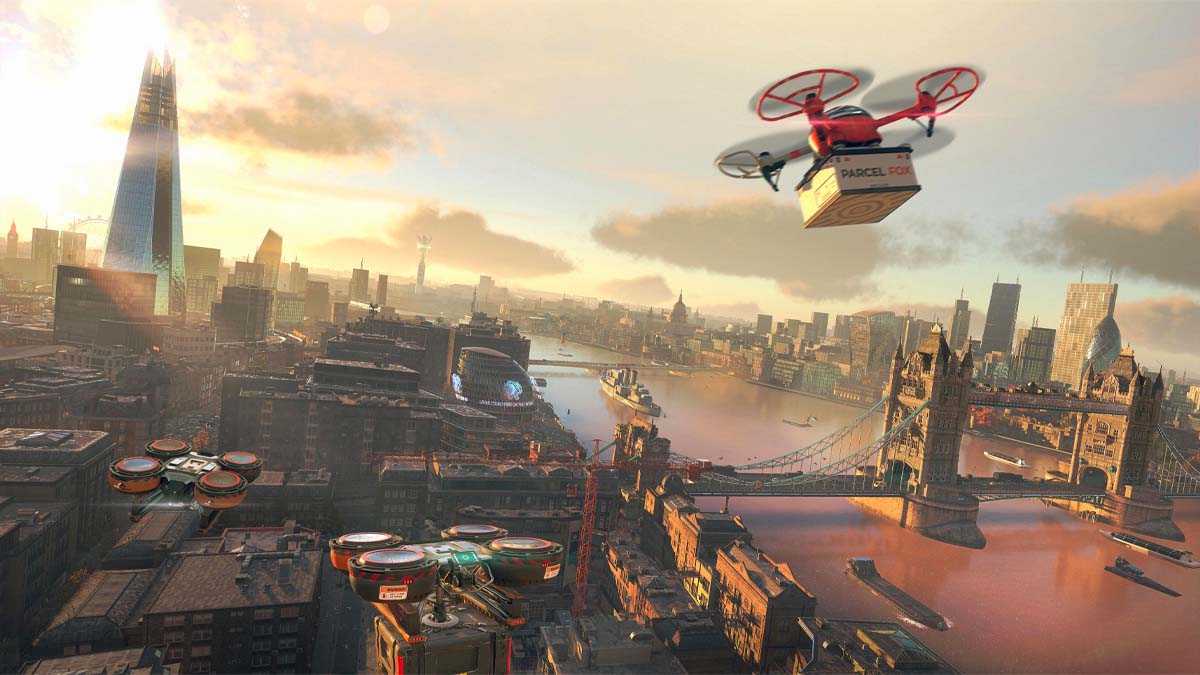 Similarly recruiting everything from Police Officers and Albion guards to gardeners, and MI-6 operatives come with unique abilities and perks, as well as special access to certain areas and places. A more specific example is recruiting Judges, which helps reduce imprisonment time if players are caught and arrested.

And although much of their differences only affect gameplay slightly, and you could play the entire game as the first recruit you select at the opening of the game, the choice and options are what makes it a great feature. 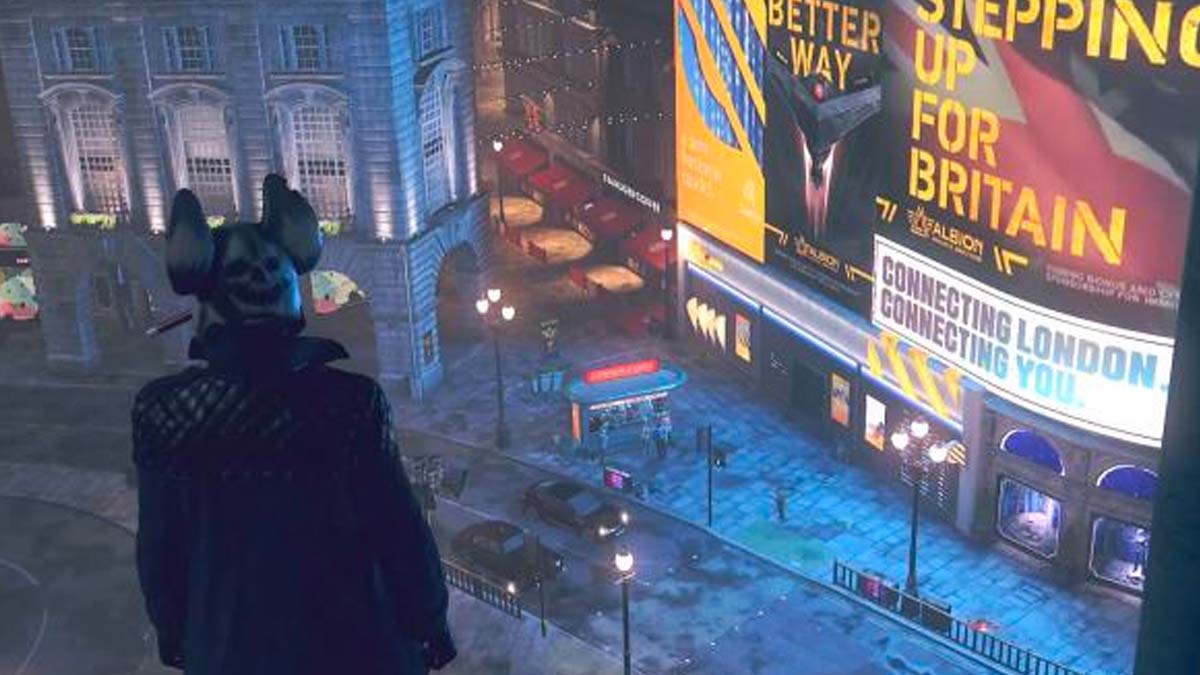 To reduce the system to something like “well I can just stay as this one person, so why bother” is like asking why you don’t just play something like Call of Duty with one gun, or Assassin’s Creed with one type of attack. The system is part of what takes a players experience to a new level, and recruiting specific characters is almost an entire game within itself.

You recruit construction workers from building sites, palace guards from outside Buckingham palace, MI-6 spies from outside the MI-6 building. Not only is the system smart and adds a lot to the game, but it all makes sense as well.

One of the most fun ways to explore this feature, and really make the most of it is by turning on “Permadeath” at the beginning of the game. This means when a character dies they are gone forever, and you’ll have to recruit a new person to replace them. If this option isn’t turned on instead they will just be critically injured and out of action for a little while, forcing the player to use a different team member for the next mission or two. 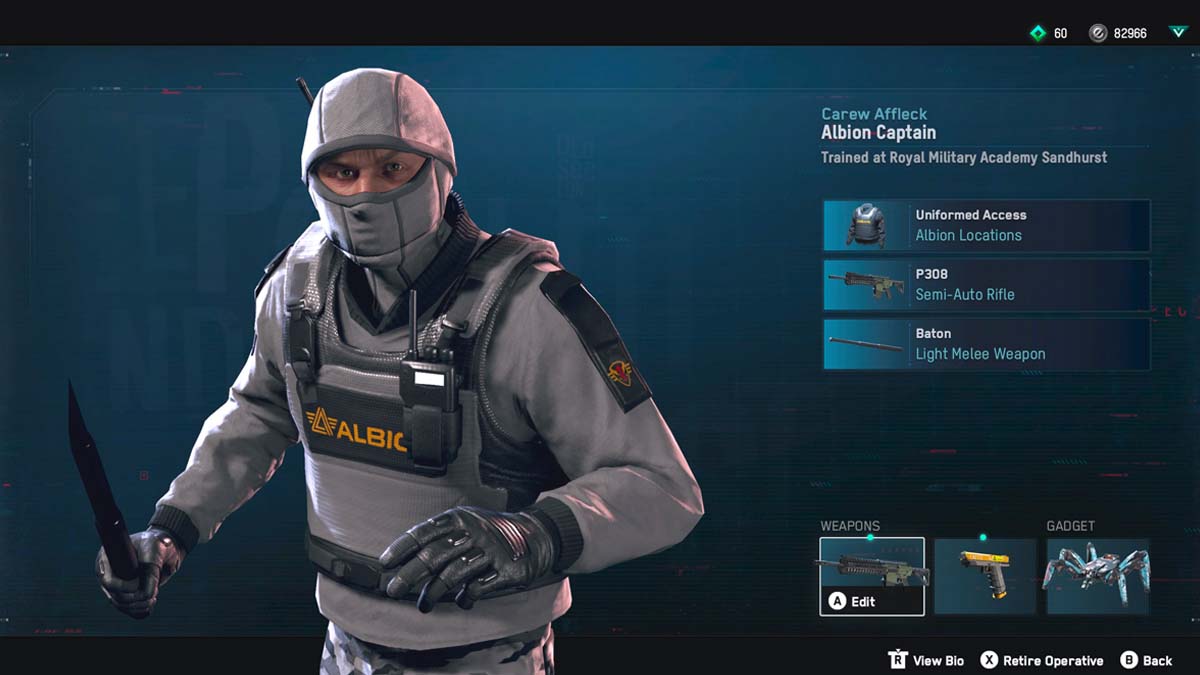 As with Chicago and San Fransisco, London is expertly recreated for the game. Helped even further by the futuristic setting and technology, which allows for a bit of creative license with the in-game version of the city. Speaking as someone who lives in England, and is in the middle of the COVID-19 pandemic, there is something quintessentially British, sombre and touching about racing around London in a Mini Cooper (or the games slightly off-brand version of them) listening to “It’s Coming Home”.

Furthering the authenticity of the game is that it isn’t simply a bunch of posh sounding generic English people, or rough sounding east end Londoners, the game is filled with British accents from all over, which is nice to see and adds the immersion.

Ultimately Watch Dogs: Legion is undoubtedly yet another formulaic Ubisoft third-person open-world game. And yet it adds enough new features, flash, individuality, and gimmicks to make it wholly enjoyable. The ease with which you can switch from being on the ground hacking a camera, and setting environmental traps to being in a self-driving car, to being a spider-bot, or to being on a giant flying drone is extremely impressive and shows how far games have come as the PS4/Xbox One generation draws to a close, especially as the first Watch Dogs game opened it. 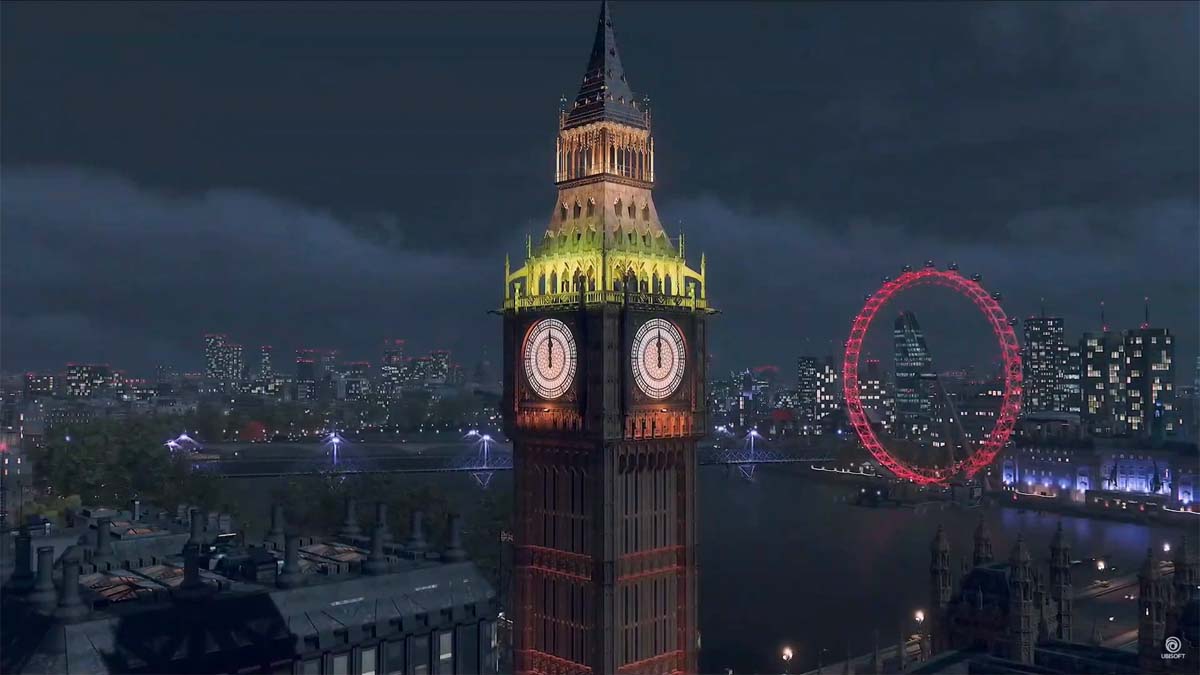 Although it’s hard to ignore the probable impact of Assassin’s Creed, a new console generation, and many other big games launching within a couple of weeks of the Watch Dogs: Legion, hopefully, it is simply the third of many more Watch Dogs games, that each adds new and innovative features that continue to set it apart from other similar (and very Ubisoft) games, 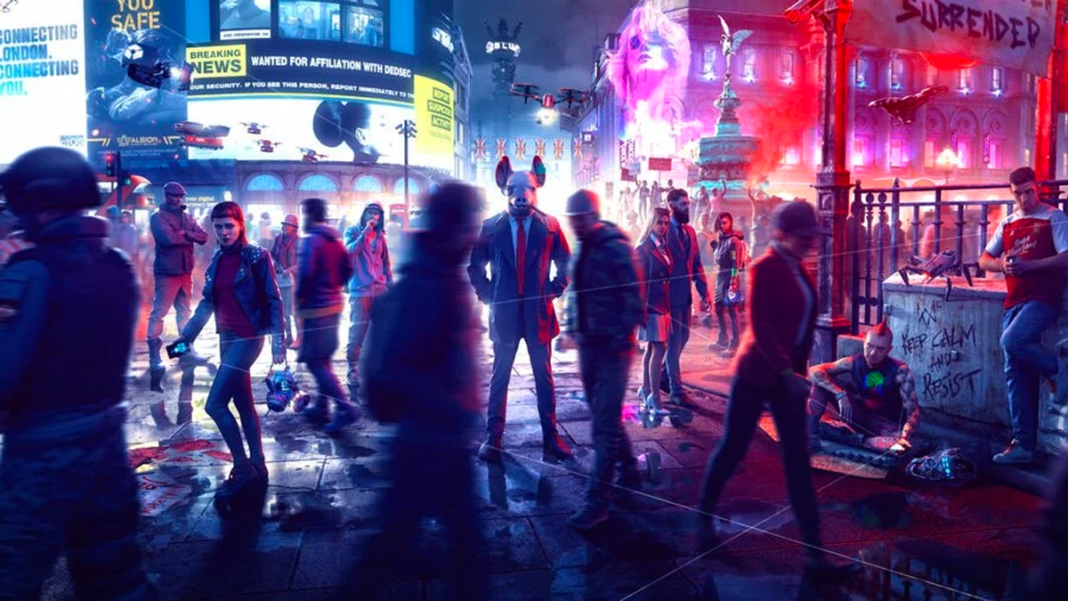 254
October 30, 2020
Previous articleThe Boys Season 2 Does Everything Darker, Deeper, and More Delusional
Next articleHow Spider-Man: Miles Morales is Much More than a Simple Sequel
© Newspaper WordPress Theme by TagDiv