For many, Sherlock Holmes who is the archetype for the modern detective and crime stories remains, the best and most influential detective, and in 2010 the world saw the latest contemporary incarnation of Sir Arthur Conan Doyle’s Sherlock Holmes and Dr John Watson, in the aptly named “Sherlock”. This version introduced the world to Benedict Cumberbatch and Martin Freeman’s 21st century Holmes and Watson, which, over a decade after it began still holds up as a great adaptation of the source material, one that manages to interweave several of the original stories and propel its adaptation and stars into worldwide fame. And perhaps most impressively the adaption not only holds up, but also made updating the characters and their world, ideals, and adventures into the 21st century look easy.

Although I’d also argue that Sherlock isn’t the best modern-day adaptation of Sherlock Holmes, I will admit that it’s completion, Elementary, is an entirely different style of the show, and a very different Sherlock and Watson. Elementary also has 154 episodes rather than 14, and most importantly, that argument is a totally separate post and video.

But, there is no denying that Sherlock had a much bigger impact, and undeniably proved to be a great modern version of the characters (aside from parts of the fourth season that I’d argue were a little too self-indulgent). Overall the BBC’s adaption ensured Sherlock Holmes’ presence at the very forefront of pop-culture once more in the characters long history.

Part of Sherlock’s appeal was how it effortlessly brought the typically Victorian Holmes and Watson into the 21st century, but it was by no means the first update of the fabled detective and his trusty companion. Without counting the countless stories written by other authors ever since Holmes’ inception, Conan Doyle himself updated the character through the years, and brought him out of retirement to help with the first world war, a far cry from his victorian beginnings. But the most prominent update was the Basil Rathbone movies that began in 1939. After only two films set in Victorian times, 20th Century Fox’s third Holmes film, 1942’s Sherlock Holmes and the Voice of Terror, took the character from the late 1800s into the then-contemporary 1940s, with the British government setting Holmes against the Nazis. 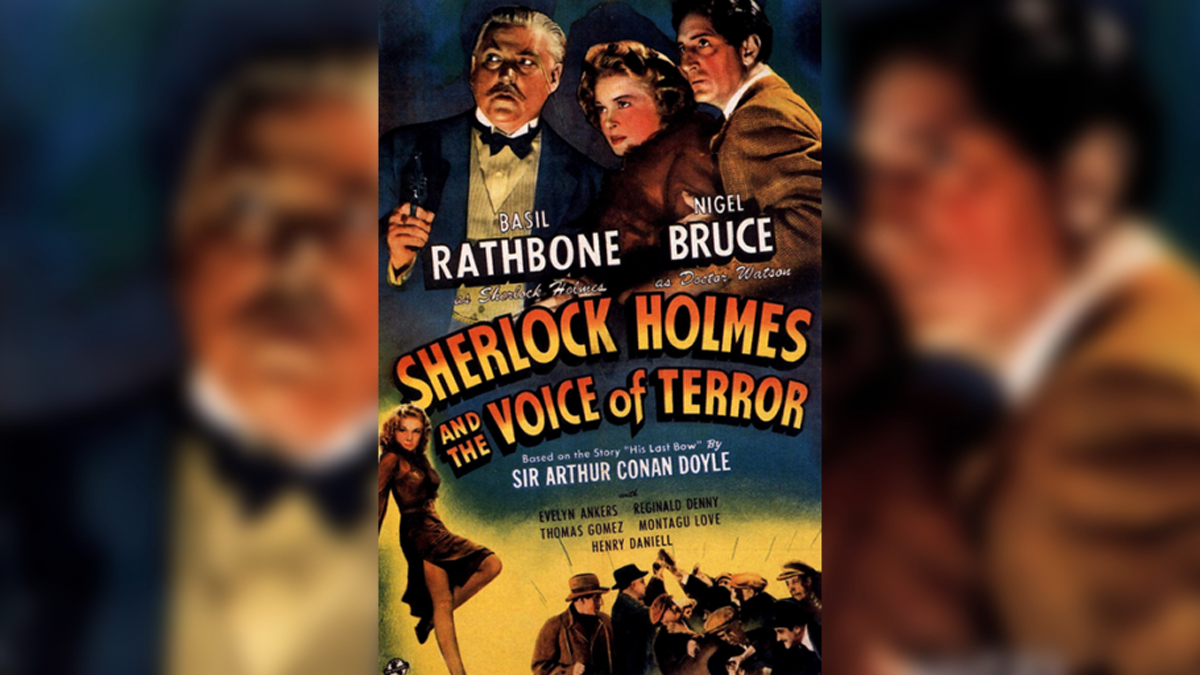 Similarly, countless other books, stories, and shows have taken the idea of a talented, often quirky, specialist consultant with a trusty companion working alongside the authorities (in a mostly unofficial) capacity, and so an updated Holmes formula had plenty of precedent and inspiration (from shows that has themselves been inspired by Holmes and Watson).

Where Sherlock shines most is how it updates the archetype detective into the modern-day. Rather sending messengers and telegrams Holmes now texts, instead of publishing accounts of his and Sherlock’s adventures, Watson now has a viral blog, and rather than being addicted to cocaine or opiates (which were much more acceptable in the Victorian era), Sherlock is instead a former smoker who relies on Nicotine patches. These updates have a way of feeling extremely simple and obvious, and yet brilliant.

Some things that stay the same are the duo’s fondness for getting cabs everywhere (only it’s now a typical black London cab, rather than a horse-drawn hansom cab of the Victorian era). Interestingly, or perhaps better put tragically, things like Watson returning from the war in Afghanistan didn’t have to be updated as over one hundred years later the British Armed Forces were once again at war in Afghanistan. 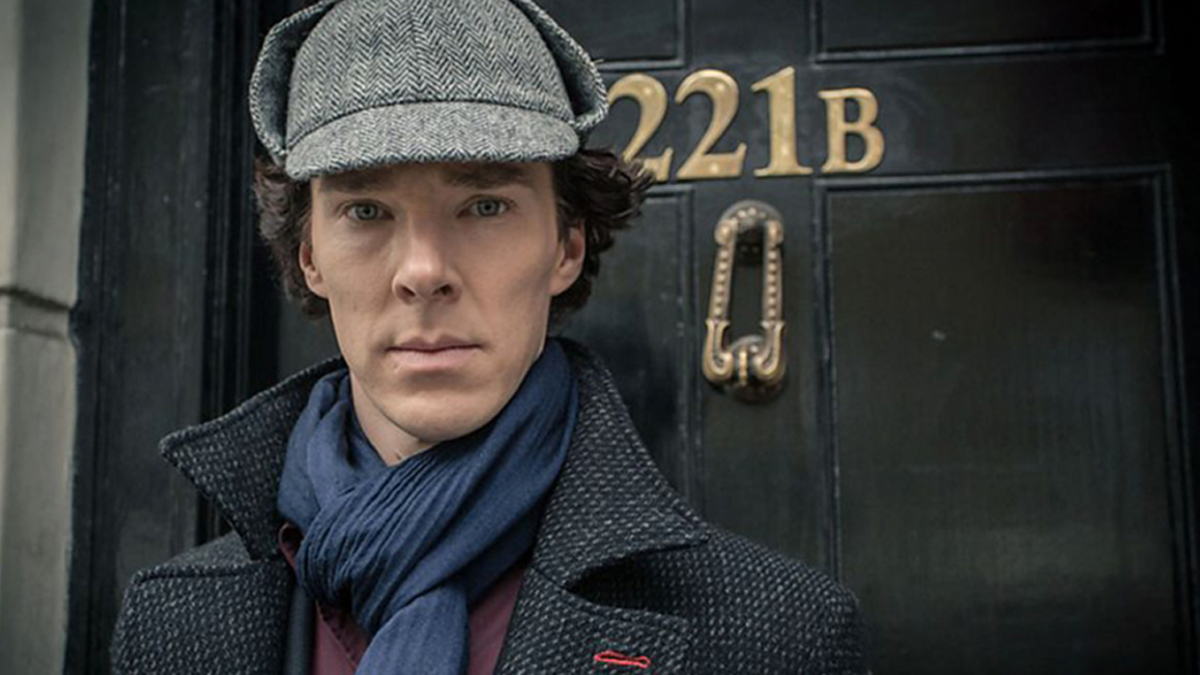 From the first episode onwards, the updated “A Study in Pink”, rather than “A Study in Scarlett”, demonstrates the show’s fondness for not just modernising but twisting and altering expectations is apparent. Aspects from different stories are brought in to flesh out the short stories into a feature-length episode. In the first episode key elements from a Study in Scarlett are present, like the poison pills and a victim being found next to the word “Rache” (which is intended to be the German “Rache” as a misdirect in the book, but in the episode is only part of the name “Rachel”, as a clue to the victim’s murderer). But the murderer themselves, their motivation and a series of other victims are all drastically different – as is the early mention of Moriarty, who doesn’t appear until The Reichenbach Fall in the books.

Later episodes take this idea even further and combine multiple Holmes stories into one. The Great game combines elements from The Adventure of the Bruce-Partington Plans, the Five Orange Pips, and other stories. The Empty Hearse combines “The Adventure of the Empty House”, “the Lost Special”, and contains several nods to other Holmes adventures.

But on top of some sharp writing and a smart update of the original stories, the undeniable key to Sherlock’s success is its cast, their chemistry, and how the show brought them into the 21st century. 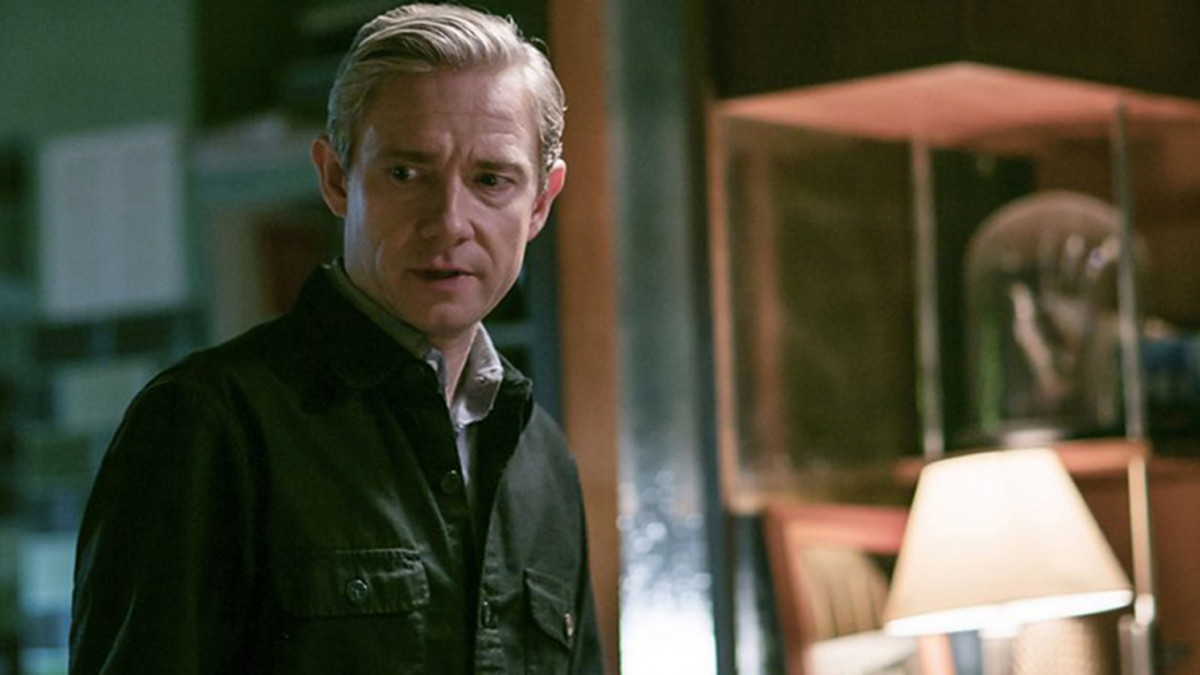 Sherlock, always a cold, calculating character, is positioned as an even more obscure and reclusive individual than in the original stories. In the books, Holmes’ aversion to friends and social situations seems more of a conscious choice than a necessity. In contrast, Sherlock’s version appears to struggle with adequately expressing his emotions much more. Despite claiming he hides them to enhance his deductive skills, there is no doubt he has emotional issues, – which are explored throughout the show, and his tendency and need to show off (a result of his pent up emotions) results in more than a few problems.

Benedict Cumberbatch’s take on the iconic character will undoubtedly go down as one of the most influential, and perfectly blends the cold edge of the infamous detective with pure love and sincerity for Watson. Perhaps pushing the harsh deductionist side of the character further than the books, but all to serve a more impactful story when his emotions do surface.

Martin Freeman’s Watson simultaneously has to put up with much more of an awkward Holmes than his literary counterpart, and as such is much less patient with him, and yet is infinitely more impressed. Where in the books Holmes regularly regrets explaining his deductions to Watson, as Watson always mentions how simple it is now he has revealed it, Freeman’s Watson is continually baffled and amazed by Cumberbatch’s Holmes. 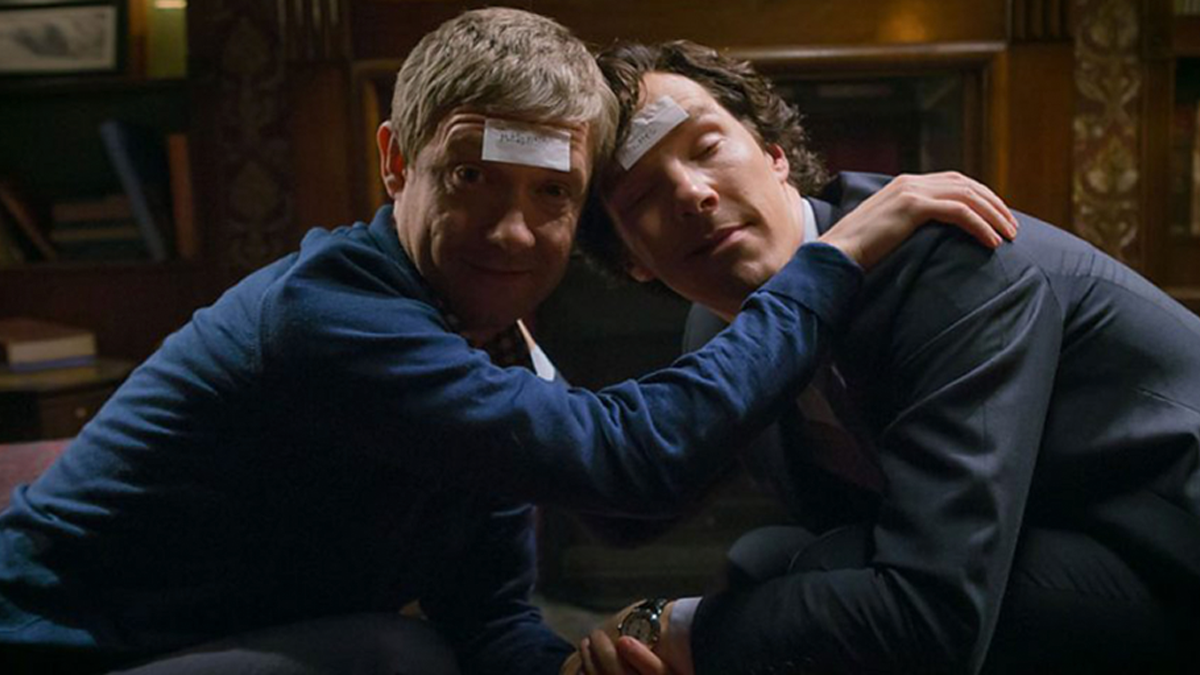 The chemistry, emotion, and bond between the two is, as it should be in any good Sherlock story, the real heart of the show. And although Watson is perhaps a little more of an amazed enabler in this adaptation, he is just as much of a realistic, ready for action, military man, and competent Doctor as the source material portrays him.

Although Cumberbatch and Freeman’s Holmes and Watson are the heart of the show, where the real magic of Sherlock shines the most is its supporting cast. The show gives the best onscreen incarnation of Mrs Hudson, Mary Morstan, James Moriarty, Mycroft Holmes, Irene Adler, and makes an incredible addition to Holmes lore with Molly Hooper.

Mrs Hudson is perhaps the best individual character to showcase how this updated version of Sherlock Holmes really adds to the Holmes canon. A sparingly mentioned and almost always silent character in the books, who admittedly does play a key role here and there, is upgraded to a mother figure to Holmes and Watson. 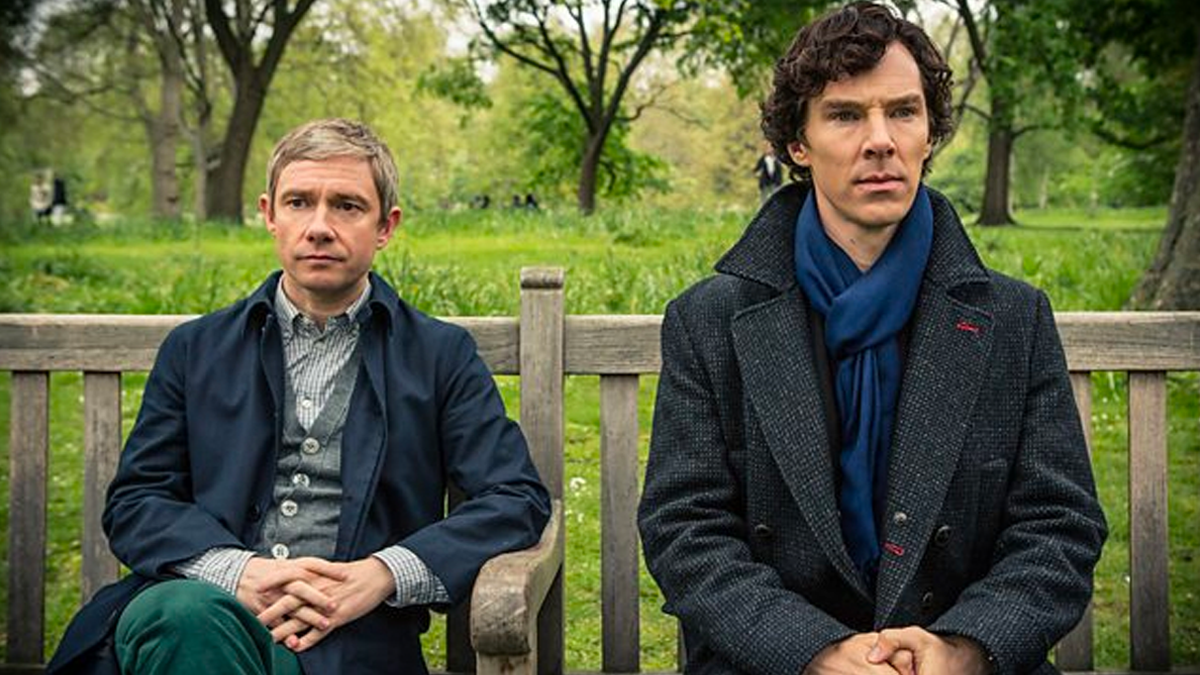 Una Stubbs’ incarnation of Mrs Hudson plays a crucial role in almost every episode, as well as a much more complex version of the character. This Mrs Hudson is eventually revealed to drive her own Aston Martin and to be the widow of the leader of a drug cartel.

A similarly expanded character is John Watson’s wife, Mary Morstan. Originally appearing in the Sign of Four story, the second Holmes and Watson adventure, Mary rarely appears from then onwards, contrasting with her debut where she plays a vital role. Unfortunately, from there Mary is more often than not mentioned as being away, or busy, as to account for Watson being able to abscond with Holmes on their adventures – right up until her off-page death, after which she is hardly mentioned again.

Sherlock’s version of Mary, played by Amanda Abbington, instead starts as a character who understands the bond between her husband and Sherlock and encourages their adventures – with later revelations detailing her own somewhat sinister espionage and murder-filled past. 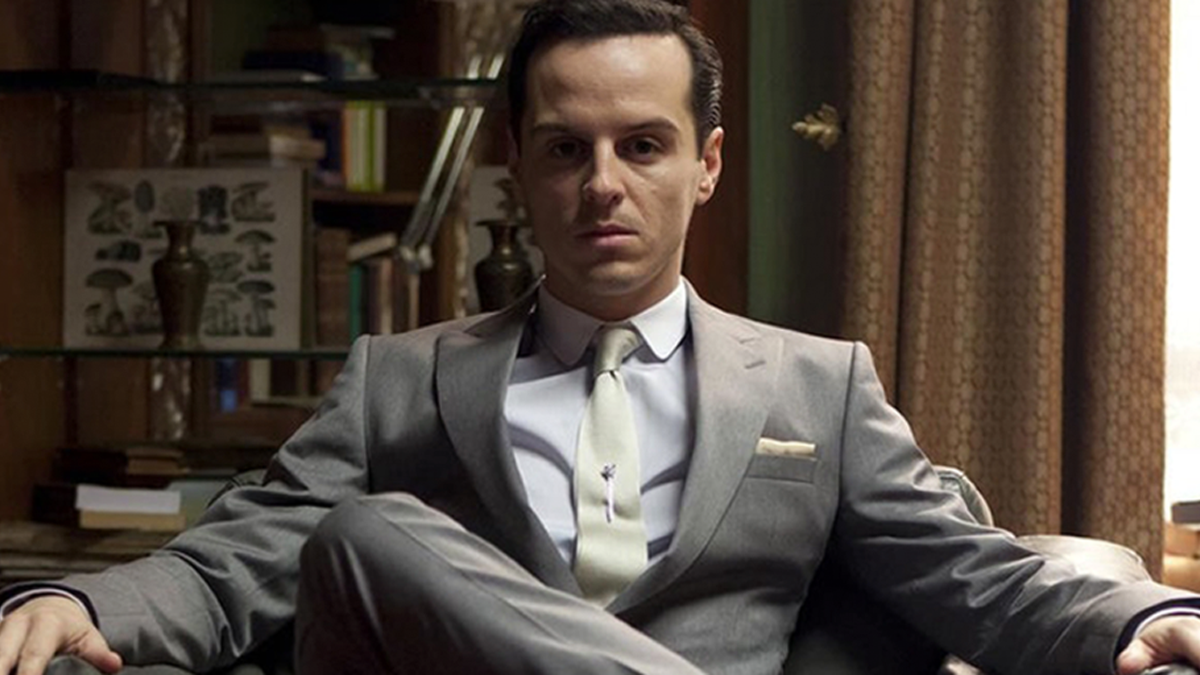 In Sherlock, the Baker Street detective’s arch-nemesis, who is equally the archetype for many modern-day evil overlords as Sherlock is to the modern hero, James Moriarty, is played by Andrew Scott. The consulting criminal counterpart to Sherlock’s consulting detective, Moriarty is at the centre of a web of crime, conspiracy and intrigue. But added with Scott’s interpretation is an insane and psychopathic streak to the character. A real sense of not knowing what he’ll do from moment to moment is dominant in almost every Moriarty scene totalling to an incredible version of the character.

The best versions of Mycroft are when they play into the idea of him being an even better deductionist than Sherlock, he’s just too lazy to act on it – and in his defence, he often doesn’t need to do the legwork to be right. Sherlock takes the idea, as stated by Holmes in “The Bruce-Partington Plans” that Mycroft “is the British government” thanks to his incredible capacity for storing facts. In Sherlock series co-creator Mark Gatiss’s Mycroft is named as the most powerful man in Britain, where it is implied he essentially runs the secret service (and perhaps much more). One of the shows best threads is how it reveals the Holmes brothers genuine affection for each other, expressed in their own very unique and dysfunctional way. 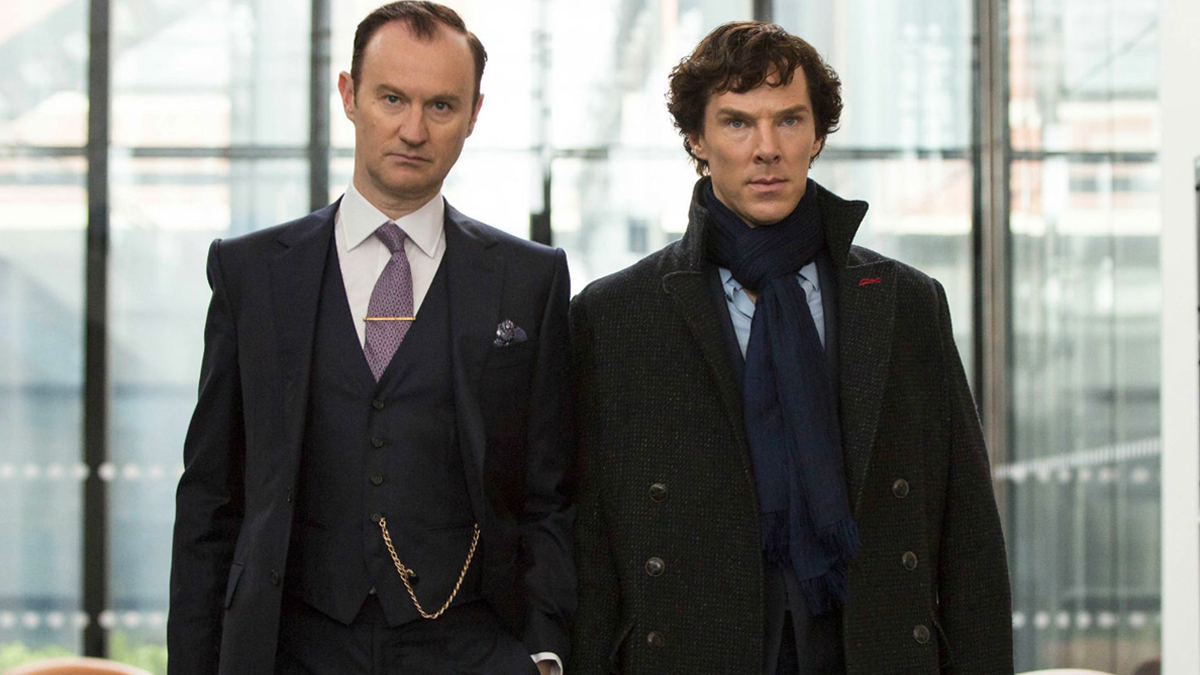 Perhaps the most significant addition the series has made to Sherlock Holmes lore is the creation of Molly Hooper. Originally intended as a one time character to showcase how emotionally unavailable Sherlock is to those around him, Louise Brealey’s Molly became a crucial part of the show, and Sherlock’s life as the series went on. Adding even more heart and normality than Watson does, which often flips the power away from the overbearing Sherlock, resulting in some touching and often heartbreaking scenes.

Sherlock’s other strengths include an incredible musical score, some solid action, some very typically Stephen Moffatt intricate plots (that mostly payoff), some great humour, and a clever (almost) stand-alone Victorian-era Christmas special that manages to address several of the updated notions.

Another notable point about the Victorian special, The Abominable Bride, that I love, and think encapsulates something about the show’s understanding of what Sherlock Holmes is in a bigger picture than this specific adaptation, is that although it implies the Victorian-era version of Holmes and Watson was all the result of a drug-fuelled thought experiment inside the 21st century Sherlock’s head. The final scene, which returns to the era after Sherlock’s drug use, could imply all of the modern-day story is happening inside Victorian Sherlock’s head, and not the other way around. Showing a real effort to leaving at least some deductions to the audience. 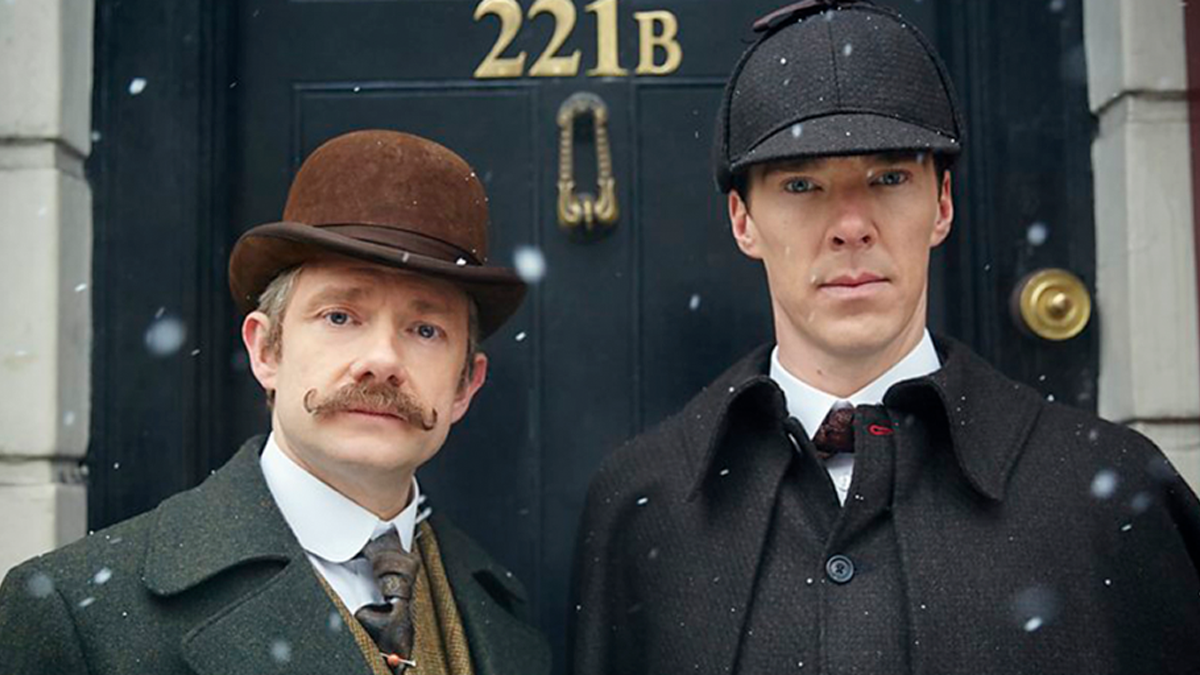 Overall the BBC’s Sherlock from Stephen Moffat and Mark Gatiss (who co-created and wrote each season along with Stephen Thompson) is an incredible modernisation of the story, which manages to update not just the original books, but the world as well, translating the ideas and themes into the 21st century rather than merely changing the setting. Sherlock Holmes and Dr John Watson have been pop-culture mainstays since their inception in 1887, and thanks to modernisations like the Rathbone movies of the 1940s, and more modern incarnations like BBC’s Sherlock and CBS’s Elementary, that won’t be changing any time soon. 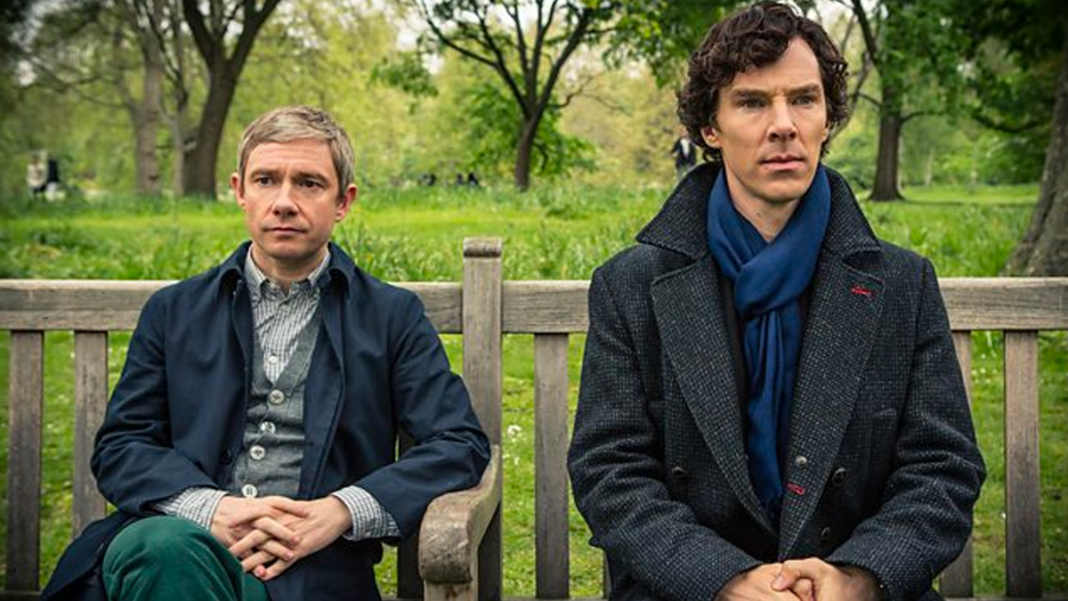 297
July 25, 2020
Previous articleHow What We Do in the Shadows Season 2 is a Masterclass in World-building and Comedy
Next articleHow Netflix’s Cursed Balances Adaptation and Reinvention
© Newspaper WordPress Theme by TagDiv